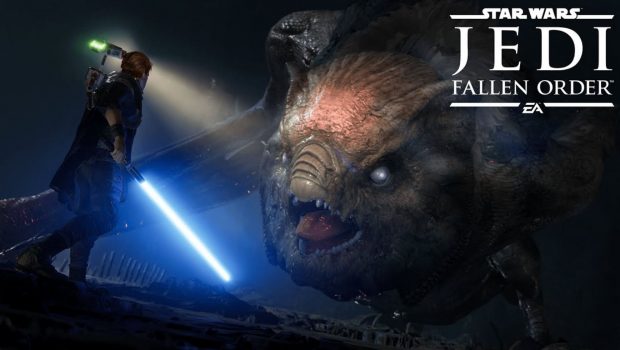 Summary: Star Wars Jedi: Fallen Order is the single-player of the franchise that while sorely needed just missed out on being spectacular. Nonetheless it was still a very enjoyable immersive experience in the amazing universe of Star Wars!

Star Wars Jedi: Fallen Order is one of EA’s most anticipated games for 2019 and if you’re a Star Wars fan, it’s probably been on your watch list since it was announced. Die-hard fans are probably already playing this game but if you’re on the fence, read on…

… Star Wars Jedi: Fallen Order is set five years after the events of Star Wars: Revenge of the Sith (Episode III) that saw Anakin Skywalker become Darth Vader after losing a battle (and parts of his body) to Obi Wan Kenobi on the volcano planet of Mustafar. The protagonist of the story is Cal Kestis (Cameron Monaghan), a Jedi Padawan who was involved during the Order 66 Purge that saw the ranks of this Jedi decimated by the Sith. As a result, he has gone into hiding and to make matters worse, his connection to the force is damaged. Respawn should also be commended in delivering a strong single-player Star Wars story and not pandering to the millennials who believe that multiplayer gaming is the only way to game.

At its core, the gameplay of Star Wars Jedi: Fallen Order takes elements from the 2016 rebooted franchise of Tomb Raider, the Uncharted series and even Dark Souls that when merged together creates a very satisfying game in terms of gameplay mechanics that works well on the XBox controller. Given that, Jedi: Fallen Order is a faux open-world action adventure game that gives the illusion of freedom with many areas giving you a predetermined path. 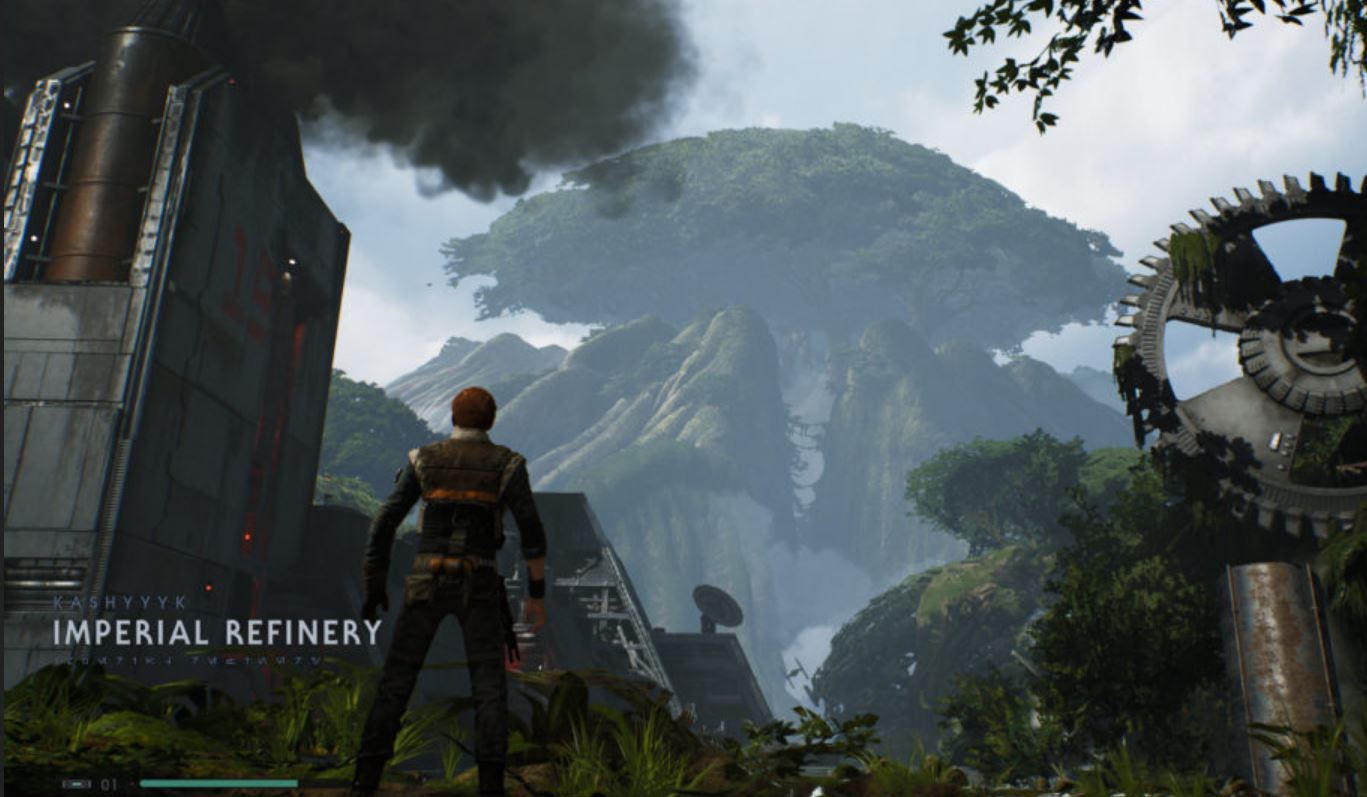 Although some parts of the game do see a little contrived such as sliding down surfaces where you need to dodge obstacles and some of the climbing and wall runs did become a little repetitive. I can’t recall Luke Sykwalker scaling dangerous heights but Rey did, nonetheless, it is a “cool” mechanic. Also you are forced to revisit areas that you have left which does add an element of grinding to the title. Thankfully the level design is deeply immersive in Star Wars lore that makes the entire experience very relatable and more importantly feels like a Star Wars game. 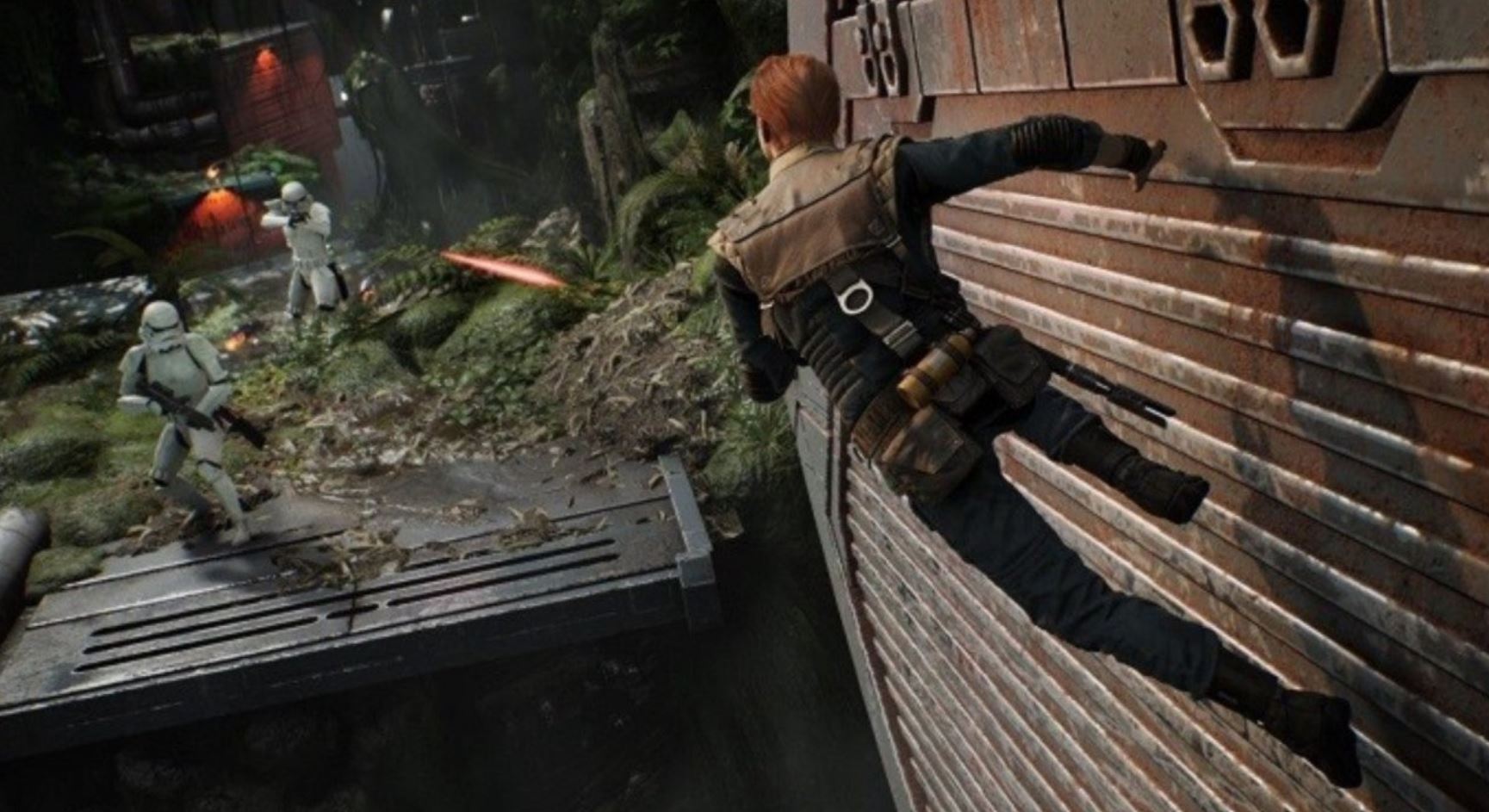 While the story of, Star Wars Jedi: Fallen Order is a little flat at times and while many of George Lucas’ universe elements are there, it just feels a little askew like the new films since Star Wars: The Force Awakens, although Rogue One was good and while The Mandalorian is just up to episode 2, this TV series is (in my opinion) is the best Star Wars story since The Empire Strikes Back. I just felt that something was missing.

Even so, Cal is a likeable character and watching him grow as a character is a highpoint of the game from a young man who turned his back on the Jedi to his own “Force Awakens” moment which the player is introduced to during the first part of the game, with some memorable cinematic moments along the way to help progress the story. 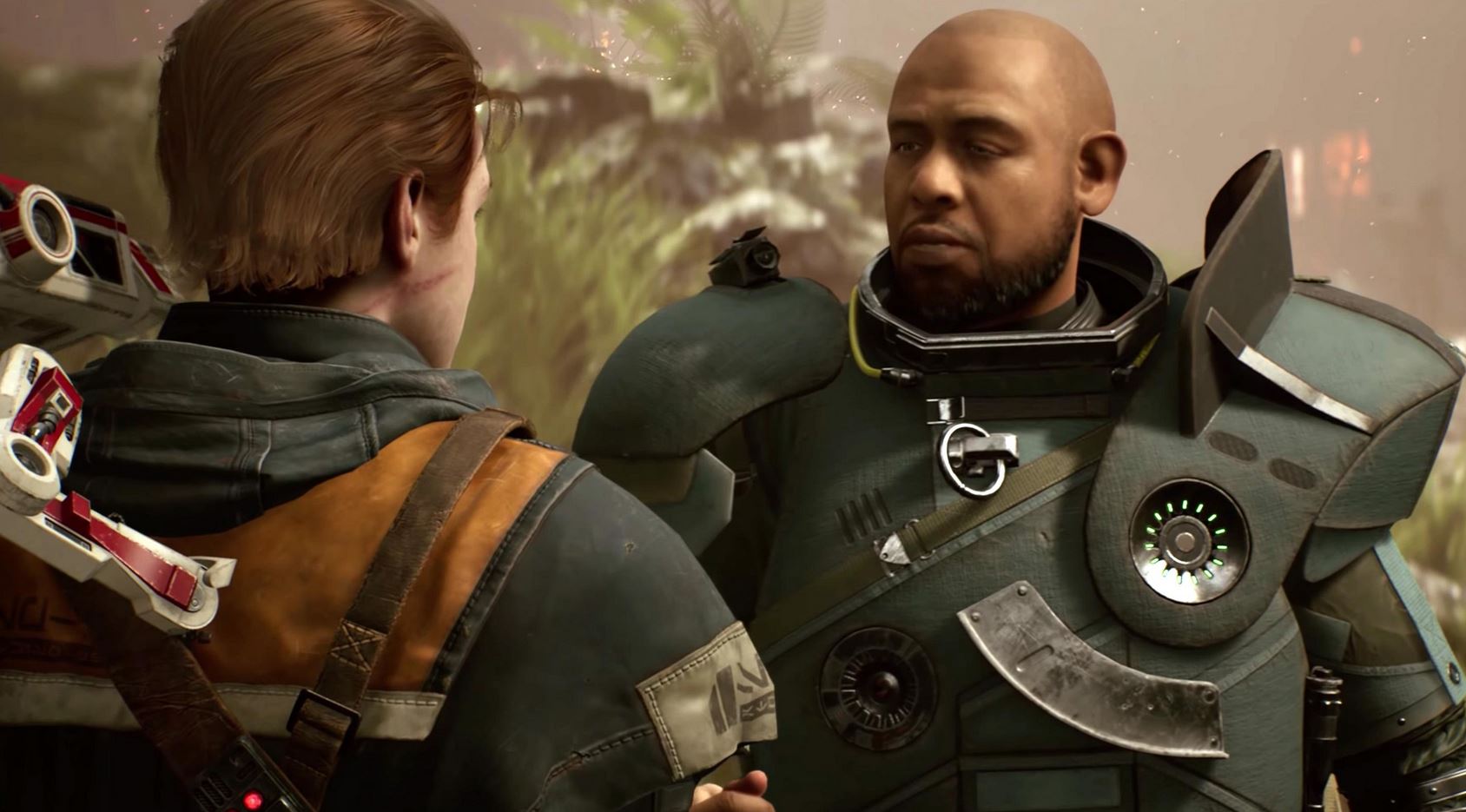 While you have basic force powers at the start of the game, including wielding the iconic lightsabre, it’s quite rewarding seeing Cal fine-tune his abilities as a Jedi. Adding to the narrative are flashbacks which help give insight into what makes Cal tick as a character who has returned to the force, plus his journey on bringing the Jedi back together by searching for the Holocron that contains the information on where the force-sensitive children are.

The villain of Jedi: Fallen Order is the Second Sister, one of the Emperor’s Inquisitors given the task of hunting down the Jedi when Order 66 was initiated. Keen Star Wars will also know that the Second Sister first appeared in the comic Darth Vader: Dark Lord of the Sith #19 which I would recommend that you check out. Needless to say she is a “badass” villain and she and her team create immense grief for Cal.

Thankfully Cal does have allies along the way with one staple being, his BD-1 droid (the Wall-e of the Star Wars universe) and together they have some great comradery moments between the two of them, including the crew of the Stinger Mantis, Captain Greeze and his shipmate Cere Junda (Debra Wilson), a former Jedi who literally save our hero. Sure the droid uses all clichés from this franchise, including audio chirps and holograms but it just wouldn’t be a Star Wars story without it and these lighter moments really helps balance the darkness behind the game. 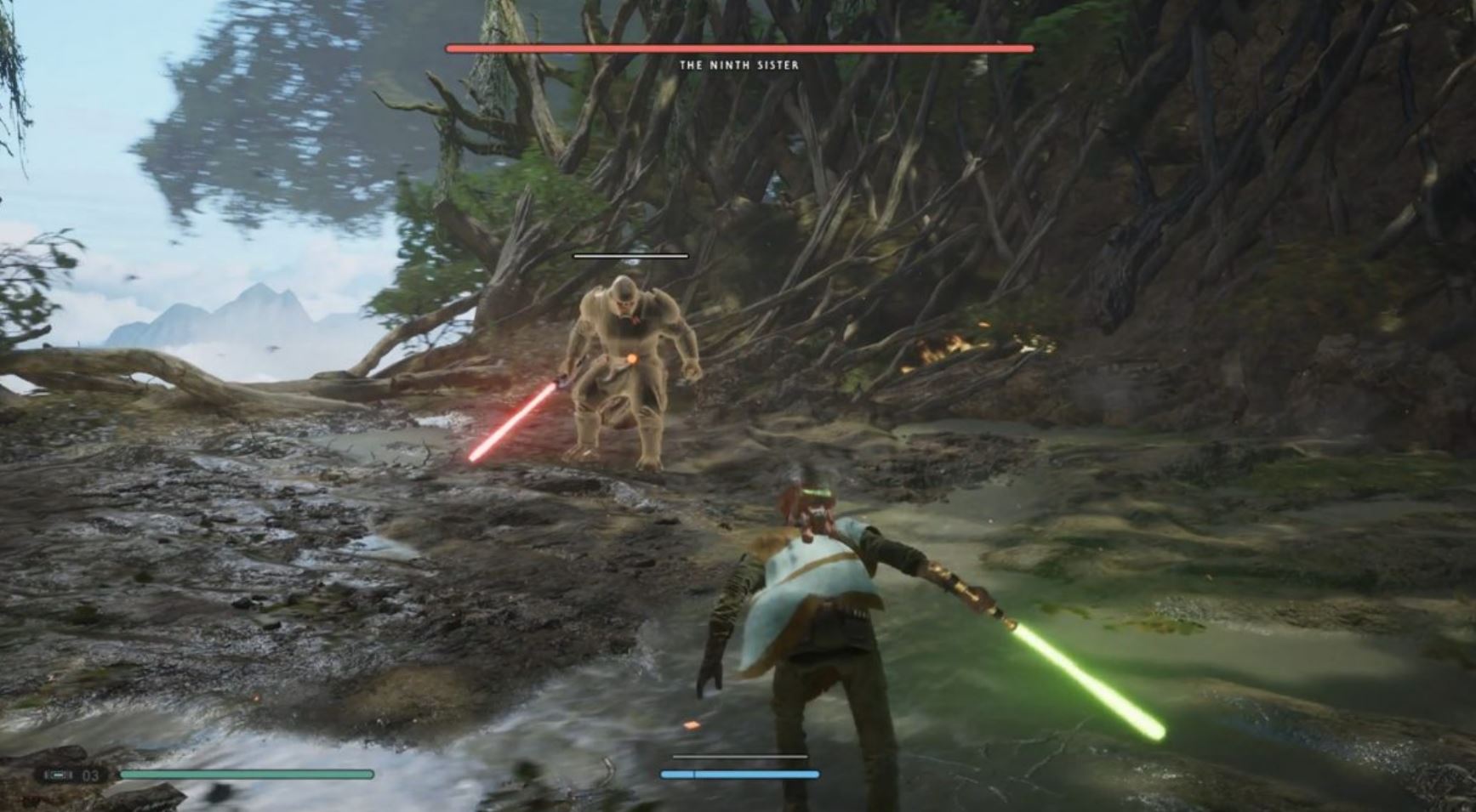 The first level of the game serves as a tutorial which teaches you the basic mechanics of Jedi: Fallen Order which includes navigation, jumps (including lots of falling later on in the game), climbing plus basic combat, such as fighting with the lightsabre and using your force powers. This level also gives you a taste of things to come as you explore the ruined ships of this junkyard planet as the Empire attempt to reclaim parts from these ships. As you progress, the gameplay does change, including access to BD-1 and the zipline plus learning new abilities via a skill tree of three paths which is done through meditation. Oh… you can even customise your lightsabre! 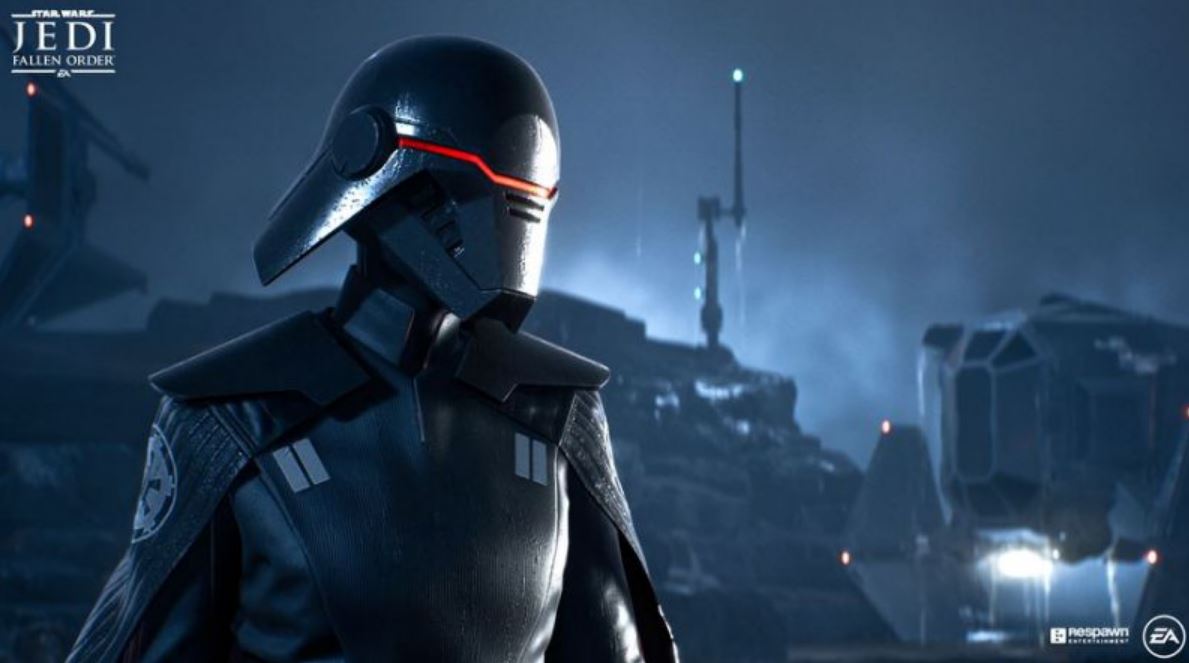 Once you do leave the first world, you are treated to some familiar and new destinations, including the Wookie planet of Kashyyyk which looks fantastic. Exploration plays a key role in the game as you complete your objectives, discover new areas, find secrets and precariously climb and walk in places where you shouldn’t be that does make you feel like Nathan Drake and Lara Croft.

The combat of the game is quite sturdy, particularly using the lightsabre that is almost flawless. As you deflect blaster shots from Storm Troopers, take on the inquisitors and use the force to get the upper hand on your enemies, I had a “blast”. Depending on what difficulty you play Jedi: Fallen Order on, it can be a challenge and stims to replenish your health are not always readily available, including BD-1 who cannot always help. Then you have the boss battles which are not only a highlight of this title but at times quite frustrating but they all have a weakness which you need to exploit. 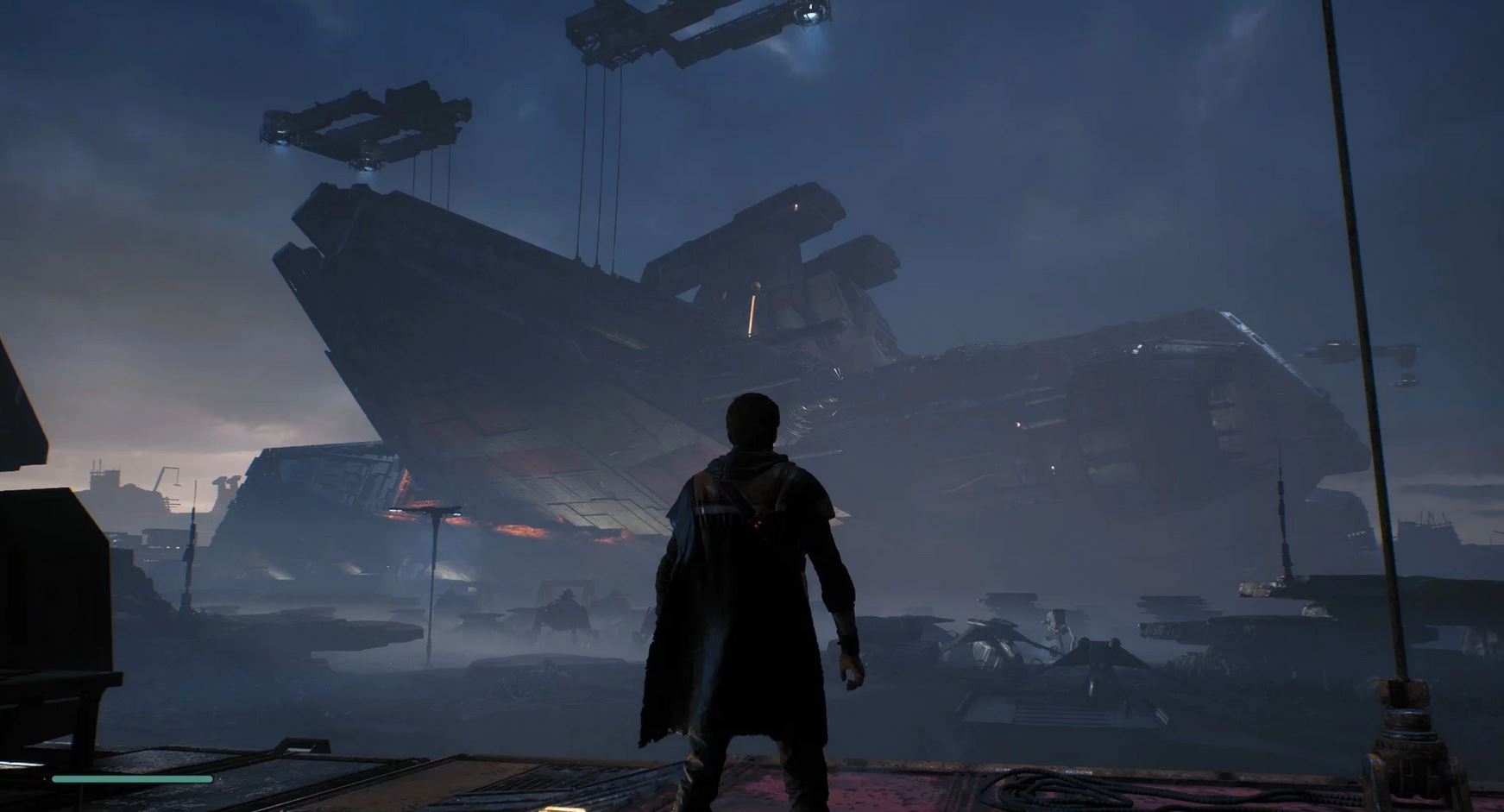 Graphically, Star Wars Jedi: Fallen Order looks amazing on the Xbox One X thanks to its detailed and colourful 4K graphics which really celebrates this sci-fi universe well. Level design is top notch as are the character models, their movement, the lighting used in the game plus the special effects. Oh… the lightsabre “light” effect looks awesome when you are in a dark area and as a result, it can be used as a light source.

Given that, it feels like Star Wars, especially with its “memorabilia” littered through the game, destinations, characters and ships such as Tie Fighters and Star Destroyers. Add in the excellent score of legendary composer John Williams, including new music plus all the amazing sound effects of Star Wars and the professional voice acting and this game not only looks fantastic but sounds fantastic as well. So when matched with the gameplay, Star Wars Jedi: Fallen Order comes together well. 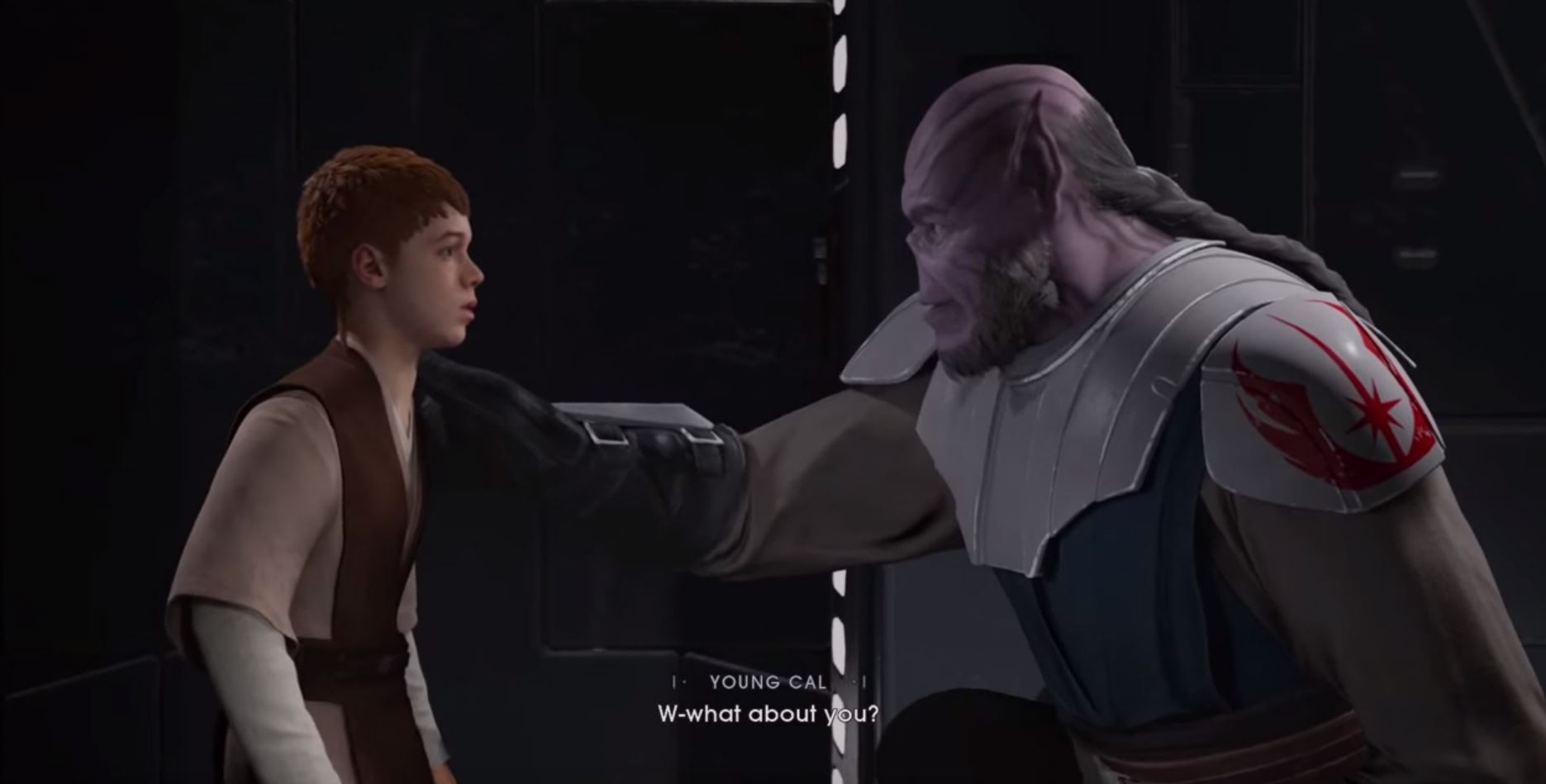 While I enjoyed Star Wars Jedi: Fallen Order, the gameplay for the most part was quite fluid, including the combat, however the story which does have some totally cool moments did at times feel a little, well… err… forced at times like a group of people were throwing ideas and concepts around a boardroom. Even so, it is the single-player game that many Star Wars fans wanted and developers Respawn should be commended on successfully revitalising the franchise again and let’s hope this becomes a yearly event. Just be warned that the gameplay can be a little repetitive but hopefully the Star Wars branding will keep you invested from start to finish.