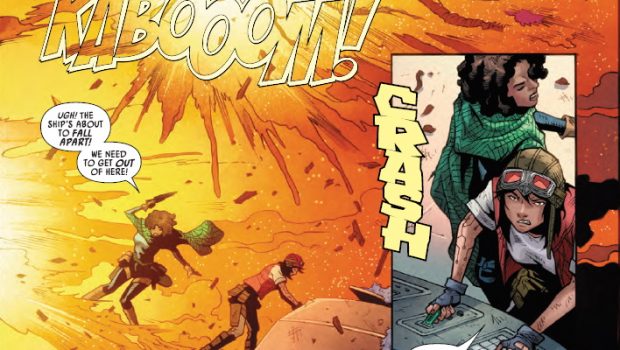 Summary: Dr Aphra makes enemies wherever she goes even by just being there. Will she escape this time?

After Dr Aphra was captured by bounty hunters and “convinced” to work for the head of the crime family she finds herself on an Outer Rim jungle planet that was the scene of a space battle.

For some reason the trees have grown through a ship very quickly for what should have taken hundreds of years. Aphra thinks that the ship ended up inside the tree in a hyperdrive accident but does not have long to look around when the Unbroken clan turns up and blows everything up.

This is the start of a new storyline so you do not really need to know what happened before. It says to be continued but you know it is continuing so you know at least the main character will survive. I recently read a collection of one of the previous stories of Dr Aphra and Darth Vader says in it “I sense an infuriating presence” when she is trying to escape.

The second story about the hit at the gambling planet seems to be unrelated to the story but I am sure it will link up in time. I do have strong opinions for trying to shoehorn the Disney continuity into the original trilogy but this seems in its own world. Unbroken clan is mentioned a lot in the Bounty Hunters series so I am sure there will be another crossover at some point.

I am not sure where this story actually falls in the original trilogy timeline in terms of the “After the Battle of Yavin” or ABY from the first Star Wars but it seems to be fairly early on. From the other story I read the Empire has so many priceless Sith and Jedi artifacts they have a warehouse full of them they pretty much forget about.

Still a fun story and worth it if you have been enjoying the series and character so far.