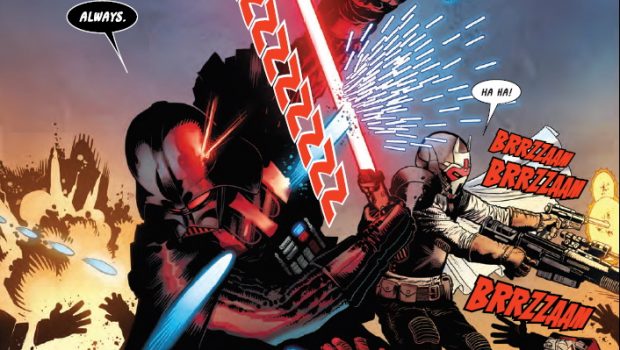 Summary: Is plenty of action in this one and a good plot, but if you want more of the War of the Bounty Hunters storyline go read that entry in the storyline this one goes back in the timeline.

Heading away from the main War of the Bounty Hunters storyline for a bit, Darth Vader and Ochi of Bestoon (no, it’s not Starlord on the cover) are doing some of their own investigations as to who Bokku the Hutt is working with. Darth Vader’s idea of helping is to throw Ochi off the shuttle as they are flying over the surface of the planet. Given this is Vader we are talking about that is mild for him.

I got confused after what happened in the previous issue, but that storyline was continued in the War of the Bounty Hunters 3 and not the Darth Vader main story so they seem to have gone back a bit in the timeline.

If you want all the action them I would go read that story but this has enough action if you are still following the story these days. It does have the same issue now with all the crossover stories that there is not really a lot extra they can add to the story that the War of the Bounty Hunters does not have already.

Ochi of Bestoon does get his chance to shine here with Darth Vader only turning up when most of the enemies had already been cut down or they thought they had been. The problem with a lot of these characters they feature are not in the main movies so you know they are going to meet their end sooner or later when Darth Vader no longer has a use for them.