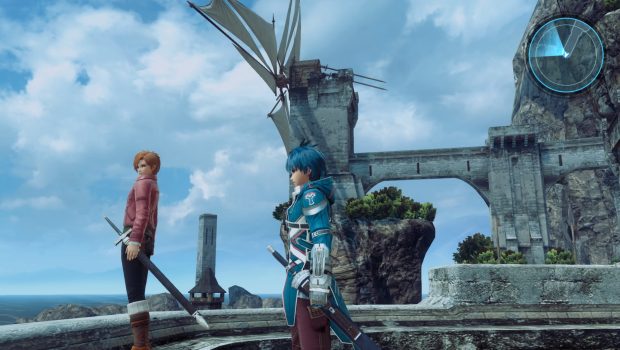 Star Ocean: Integrity and Faithlessness stars a blue-haired teenager who, in perhaps the most surprising twist, is not actually from space but is instead a resident of an underdeveloped planet. This slight departure from the norm could almost be mistaken for an innovative shake up of the formula—except that it discards the one thing that distinguished Star Ocean from other medieval fantasy-based RPGs. The science fiction coating is very Star Trek—with intergalactic treaties about not interfering with underdeveloped planets, faster-than-light travel, and teleporters—and would normally provide a contrasting viewpoint from which to explore alien worlds and customs. But in Star Ocean: Integrity and Faithlessness, you have to play the luddite—even when the truth is painfully obvious. 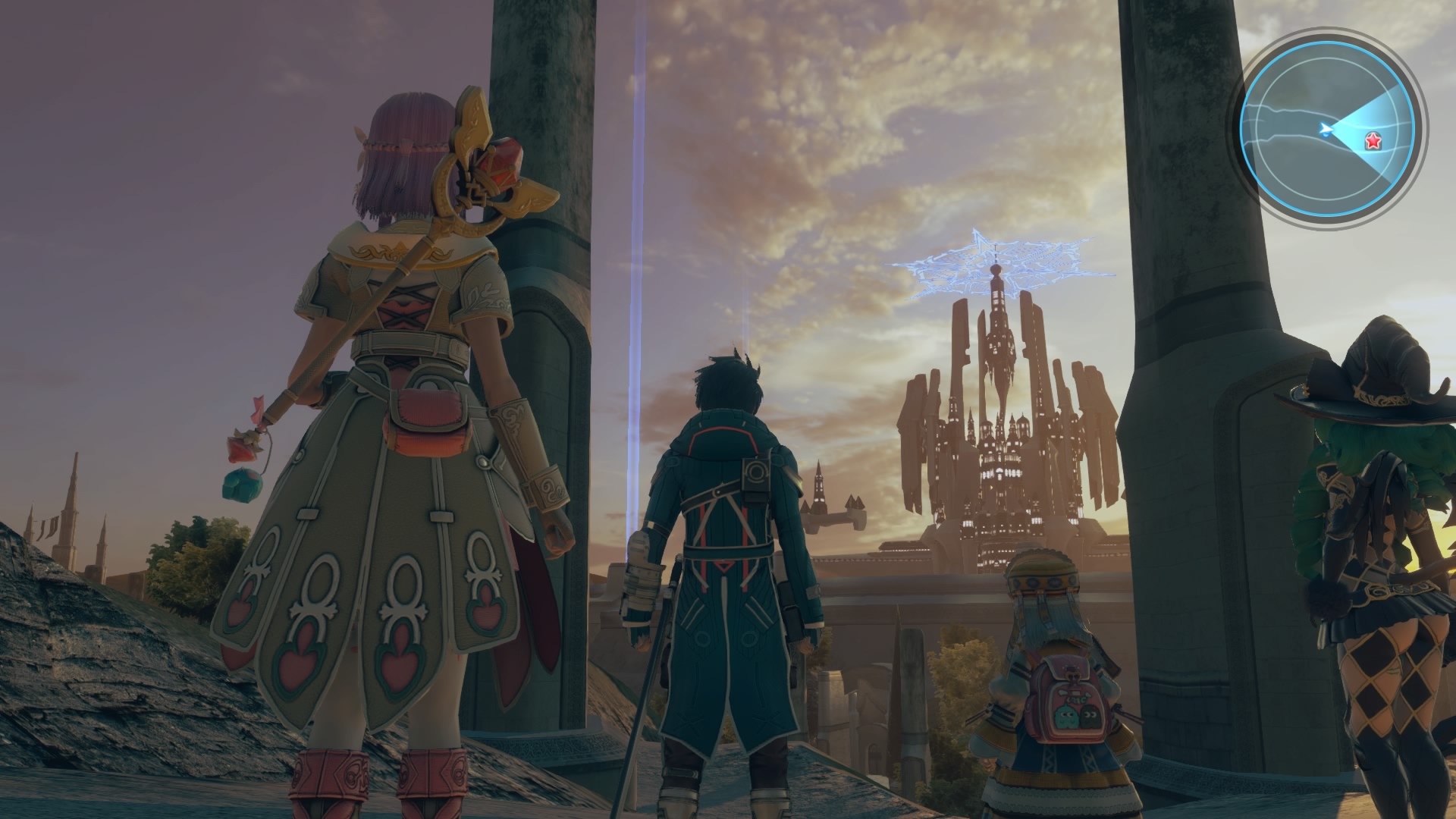 Part of me believes that if Star Ocean: Integrity and Faithlessness had instead been subtitled Consistency and Verisimilitude, then the entire development process would have had these notions close by and resolved a wide array of issues that I have with how things unfold. First, hero Fidel and adoptive-sister-who-loves-him-romantically Miki literally kidnap a girl from a ‘mysterious object’ that is obviously a spaceship. This is okay, of course, because we play as the heroes and taking young girls from the custody of the adults she was with is fine so long as your hair is blue and you carry a sword. Don’t pay too much attention to this spaceship, either, even once the science fiction starts eking back into Star Ocean; this one is never mentioned again.

The two off-world party members, Emmerson and Anne, play fast and loose with the Prime Directive—known in the Star Ocean universe as the Underdeveloped Planet Preservation Pact—but at least acknowledge the dangers of doing so and typically only do it as a last resort or in situations of grave import: like saving Miki’s life or trying to stop enemy faction Kronos from obtaining dangerous weapons. But the sidequests in Star Ocean graduate from ‘collect five blueberries’ to ‘bring me three laser oscillators’, which demonstrates a complete disregard for an apparently essential law. Is it Pangalactic Federation protocol to respond to any breaches of the UP3 treaty with ‘screw it, just drown them in future-tech’? 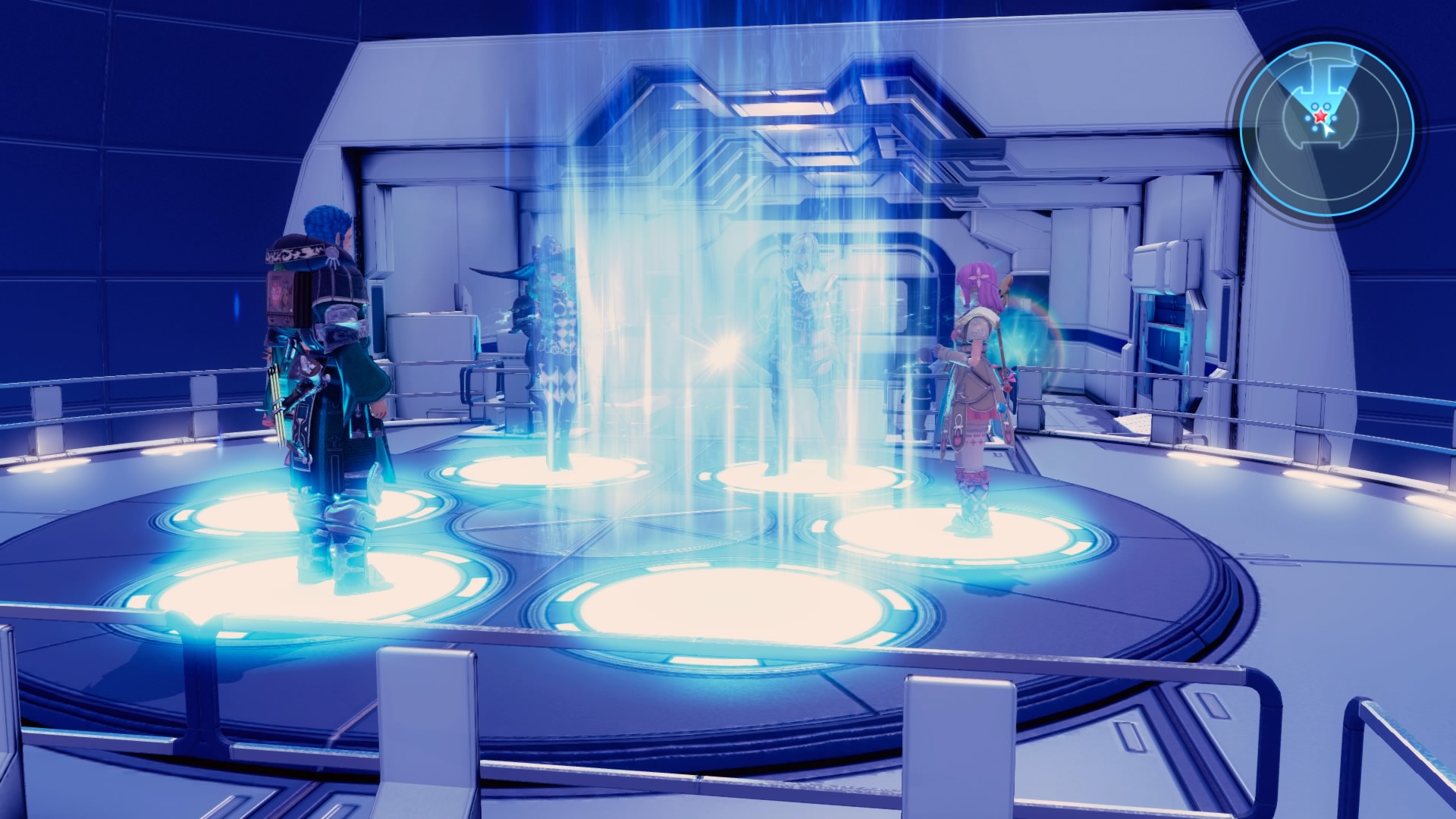 As a player, I don’t want to be treated like an idiot. I love that Emmerson and Anne quietly discuss matters while the rest of the party is engaged in the main conversation, but I do not appreciate when those subtle conversations start to become yelled conversations in a silent room while standing right behind everybody. These ‘big twists’ need to come earlier if they are going to be so plainly signposted; I can suspend disbelief about all the science fiction stuff to keep in the mindset of Fidel, but don’t expect me to maintain that for some fifteen hours while I shout answers to their questions about spaceships and laser rifles at my TV screen in frustration. This journey of discovery might be interesting from the characters’ perspectives, but I am me and I know what is going on—as will all players.

The perspective of player and protagonist overlaps a lot in many videogames but there is a clear distinction; I cannot, for instance, appreciate or understand why Fidel mourns the death of his father when all I have seen of the man is that he is a harsh, unsympathetic, and absent father who effectively left his son to die. I feel no sorrow for his death because I care little for him as a character—whereas Fidel later casually mentions that his father was actually an alright, supportive dude up until he ditched Fidel to go live in the capital. 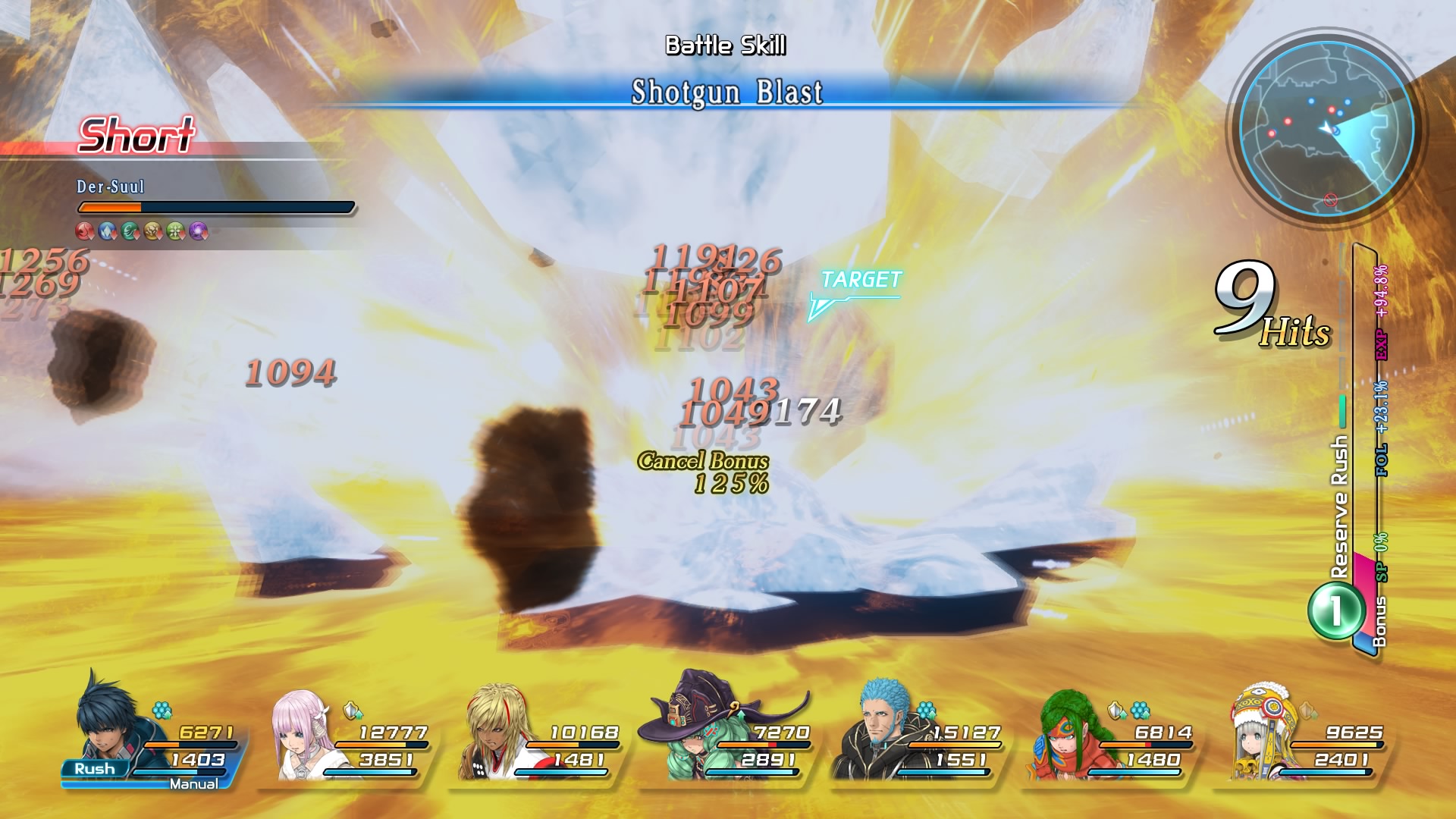 Verisimilitude, for those who don’t know, is a creative writing term that effectively relates to believability. A lack of verisimilitude, for instance, would be the way that enemies huddle together in open areas joined by narrow corridors so that the appearance of ‘free-roam fighting’ can be nudged at but never successfully achieved. A lot about the game seems designed to be more fluid and break down those old traditional distinctions of town screen, battle screen, cut scene screen. You can emote during cut scenes—which are in-engine rather than cinematic—and battles are supposedly ‘smoothly’ entered and exited. In reality, there’s a jarring nature to combat; even when I enter with a pre-emptive strike bonus, I more-often than not was immediately combo attacked by an enemy. And playing as anybody other than Fidel means that the short delay between battle-end and normal control is exacerbated as the game shoves your viewpoint between characters.

Other weird things hang over, too. Party members can be knocked out in battle, but come fight’s end they will stand back up and run around. Initiate another battle without healing them and they’ll keel right over again. Party members also refuse to use skills that aren’t set up in the player controls, which significantly undermines the effectiveness of four party members. 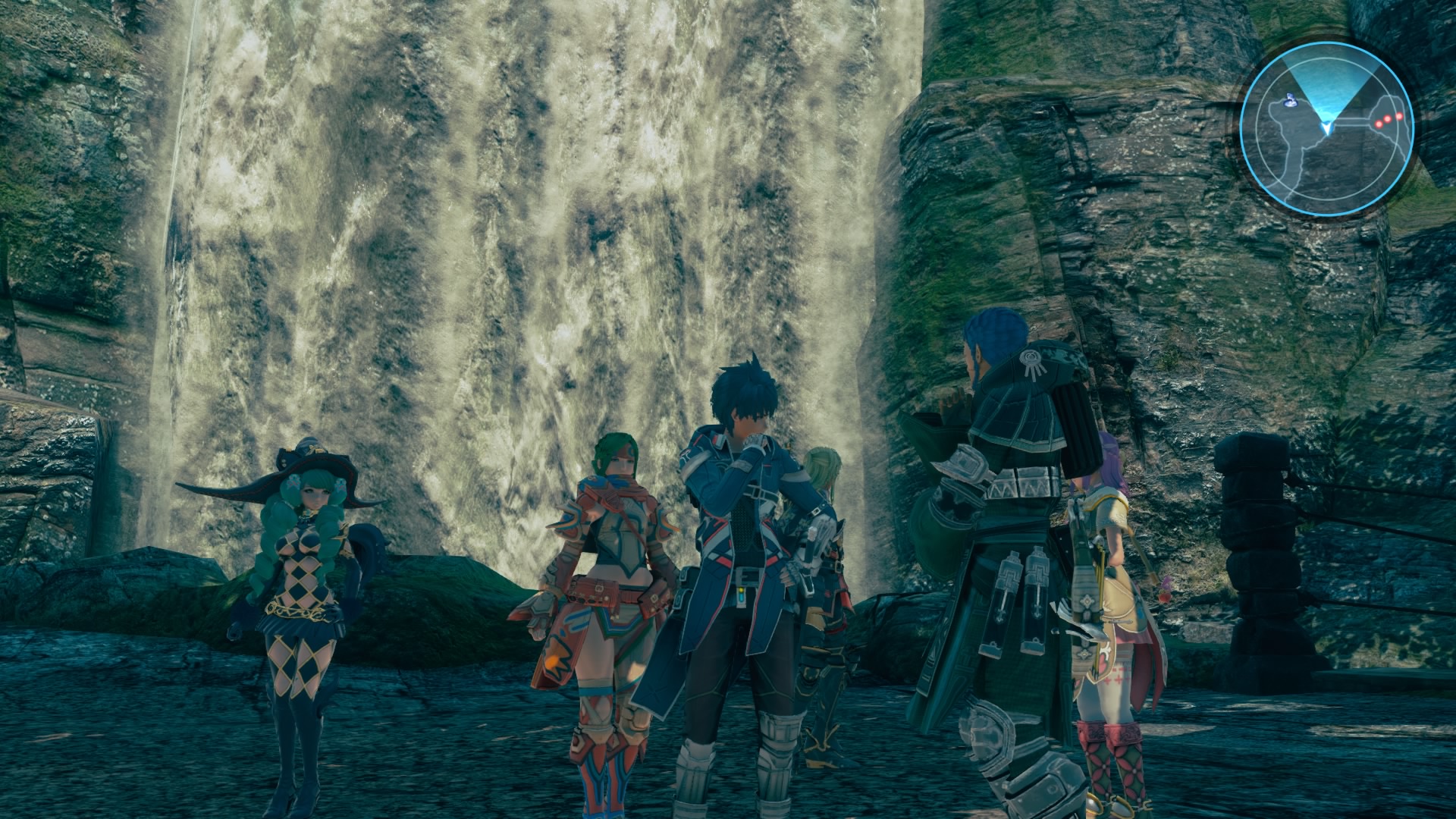 Here’s another one for consistency: clothing. Fiore Brunelli wears a ridiculous, more than skin-tight and barely-there bodysuit with demon wings, a tail, and a functionless ‘skirt’; she’s like a gothic-lolita-jester-themed stripper witch. Sounds weird enough on its own, but it also makes no sense in universe: her research institute appears to have a uniform—which is still sexy but doesn’t involve having visible ass cheeks or physics-defying breast coverage—and the notion that signeturgy (or symbology) requires her tattoos to be visible doesn’t cop when fellow signeturgist Miki has no tattoos visible at all.

A comparison, to further demonstrate this issue of consistency: Fidel has his face, neck, and two-thirds of each finger visible; the rest of him is clothed. The same goes for all of the characters: the men are wearing full armour or robes, while the women have short skirts if anything resembling clothing at all. I understand the desire to design sexy female characters, but it so blatantly clashes with everything else—physics, established clothing conventions, the principles of functional combat attire, good taste—that I can’t help but feel it completely misses the mark. 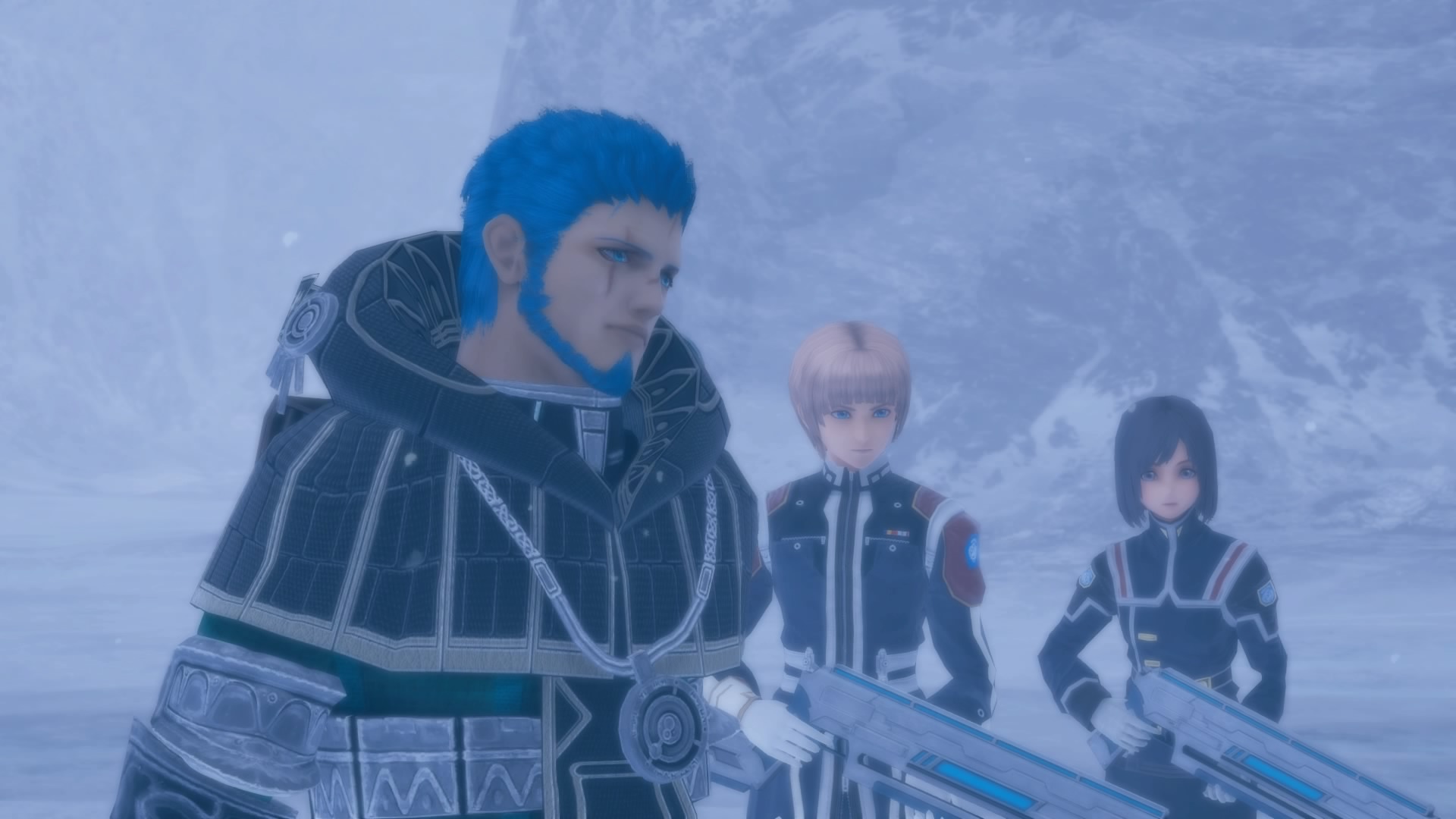 One thing that irked me was just how minimalist, almost hidden, all of the space-related stuff was. Even when the party finally steps off-world, they never really see space. Ship-to-ship combat scenes involve lots of technical jargon and lots of random button pressing from the safety of the bridge, never once seeing or hearing anything actually feels like a fight. The lack of outside-ship view makes everything feel dull and isolating; space is boring. And when you come back to space again, you ‘fly’ close enough to enemy ships so that you can teleport into their suspiciously dungeon-like corridors.

Star Ocean feels like a drawn out prologue to a larger experience. Just when it seemed like I was about to depart from the starting planet and begin my journey, I checked Fidel’s status and noticed he was already level 60—which indicated to me, as someone who has played many RPGs, that I was nearing the end of the game, not the end of the section. It is disappointing that the most interesting character developments come in the epilogue—which elevate the characters from routine tropes by placing them in an unfamiliar setting—because it means that, in the end, we’re left with kind of meh characters who are dressed poorly. 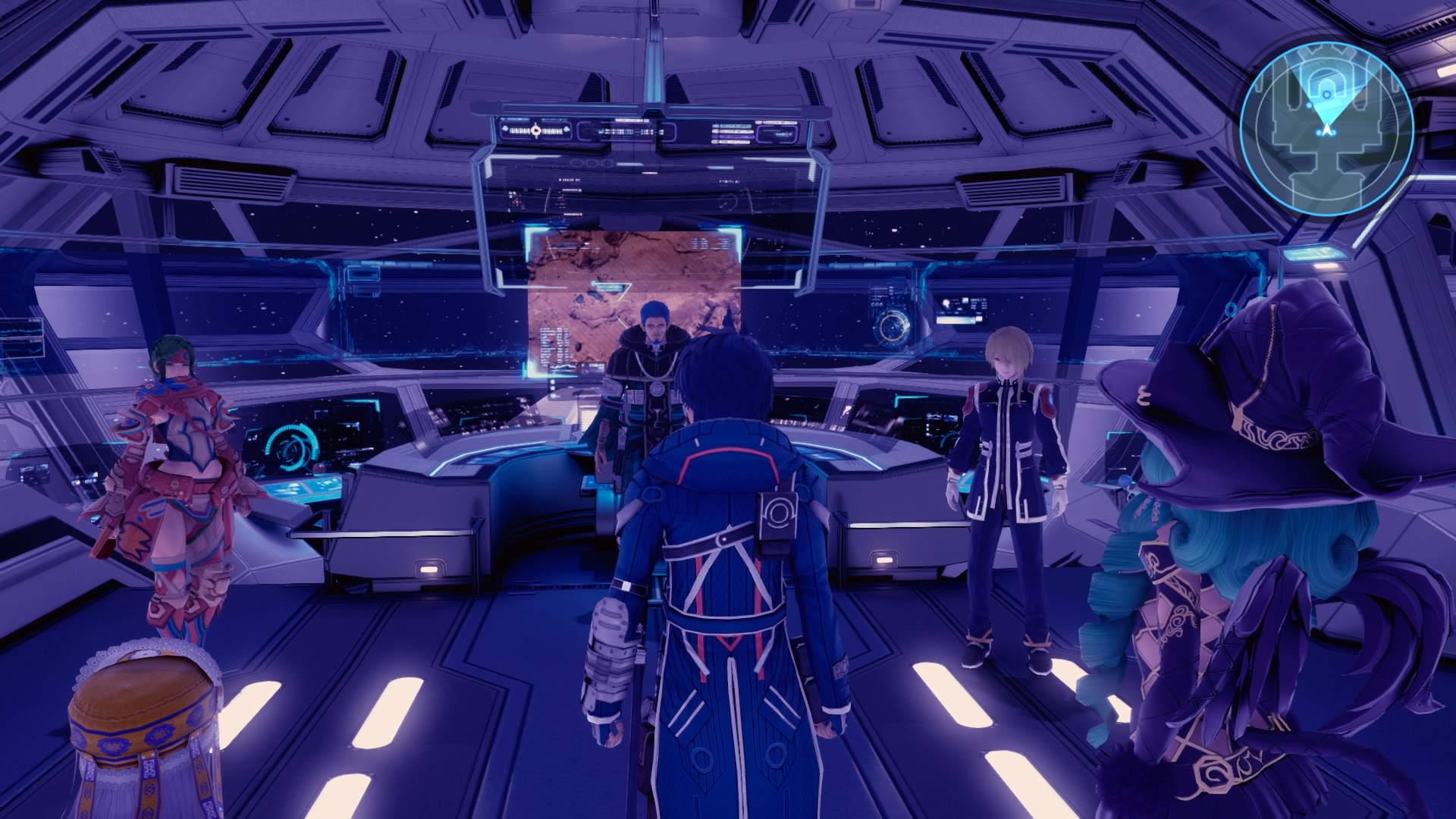 Star Ocean is not devoid of positive aspects. I love that Relia takes part in battle despite not playing an attacking role. By allowing all playable characters to participate in battles, those ridiculous rationalisations for splitting the party up into smaller groups is ditched and we hit a few ticks in the consistency and verisimilitude boxes. I even like the fact that the main character is not space-faring, even though this angle isn’t fully capitalised upon.

I also like that it wasn’t gargantuan; a solid weekend or two and you can see the bulk of what is on offer in Star Ocean, which is much more manageable for a lot of people than 100+ hour epics. I would not have minded a longer experience, particularly if it involved Fidel and friends actually in space, but smaller RPGs definitely have their place as well. I just wish that Star Ocean: Integrity and Faithlessness was a little more refined: it isn’t an unpleasant experience, but there is very little ground-breaking about it. 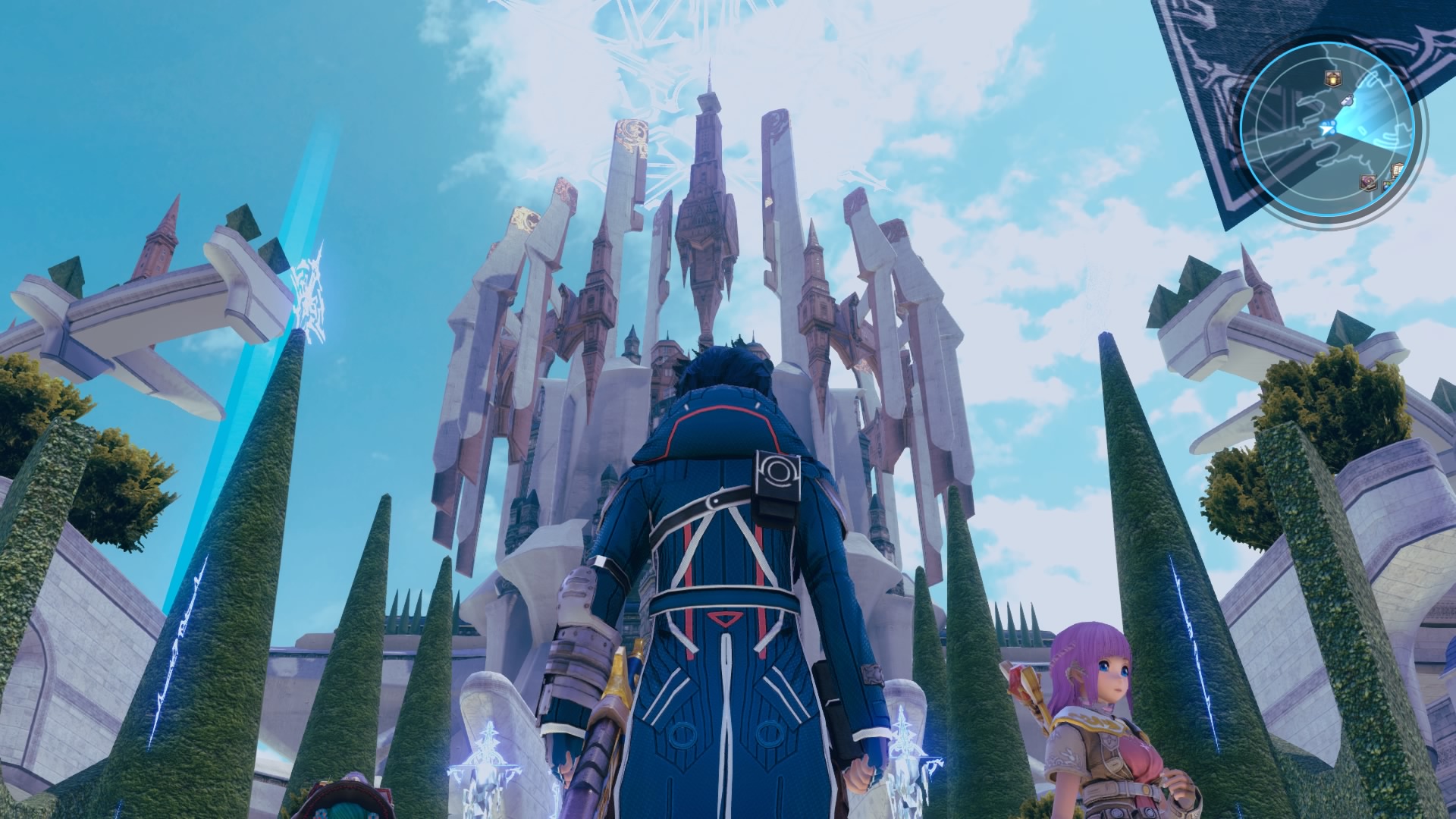