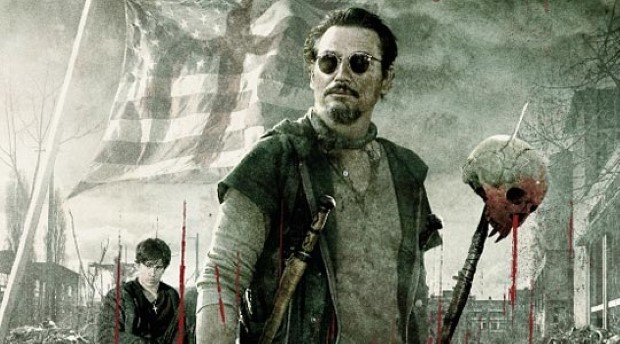 Summary: It’s a unique beast unto itself due to its competent amalgamation of influences and, despite not quite reaching the profound heights it aspires to, Stake Land is a solid entry in the increasingly commercialised and idealised Vampire genre.

Stake Land is a Vampiric romp through post-apocalyptic America that thankfully moves away from the romanticised view of the undead that has dominated films of late; make no mistake, there’s no pining for forbidden love or clumsily handled analogies for abstinence to be seen in this release, with the creatures in Stake Land depicted as vicious, blood-thirsty animalistic ghouls that share more in common with the behaviour of Zombies – Especially the current trend of fast moving undead – Than with moping, sparkly perfectly-coiffed heart throbs.

Stake Land introduces us to a vision of an America in shambles, with the country decimated by a plague that has turned a significant portion of the population into creatures of the night. Society has collapsed and the United States has been reduced to a small network of cordoned off townships where survivors struggle to maintain their daily existence against dwindling food supplies, the loss of law and order and, of course, random attacks by packs of Vampires. 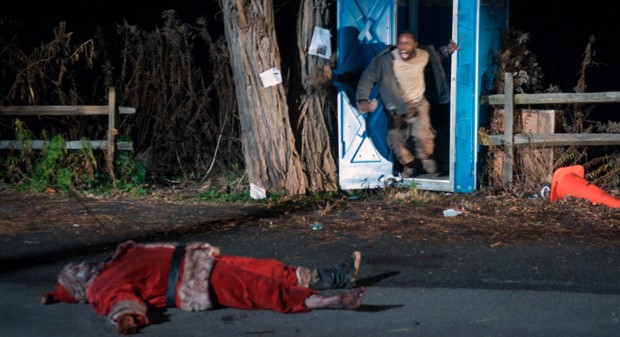 We’re introduced to the travelling duo of Mister and Martin, a Vampire hunter and his protégé, respectively, who are on a pilgrimage to the promised sanctuary of New Eden. With society ravaged and little hope left, the pair move through the decimated countryside, doing their best to avoid both the undead and a religious blood cult known as The Brotherhood, who view the plague as a harbinger of Judgement Day and are doing their best to expedite the process, usually through the rape and slaughter of those deemed unfit for ascension; during one particularly memorable sequence, they even drop vampires into a safe haven in order to “cleanse” the town.

The paternal relationship of Mister and Martin is reminiscent of The Man and The Boy from Cormac McCarthy’s The Road; as Mister bestows survival skills upon his ward whilst avoiding cannibals and fundamentalists and they trek through an increasingly barren wasteland, the similarities are undeniable. Religious allegories are also quite prevalent in Stake Land, with devotion to ones faith playing a major role, particularly in the misguided leanings of The Brotherhood and their actions, as well as the title of the promised land and the character of Sister, a nun who joins the pair after narrowly escaping a rape attempt by the son of The Brotherhood’s leader, Jebediah. 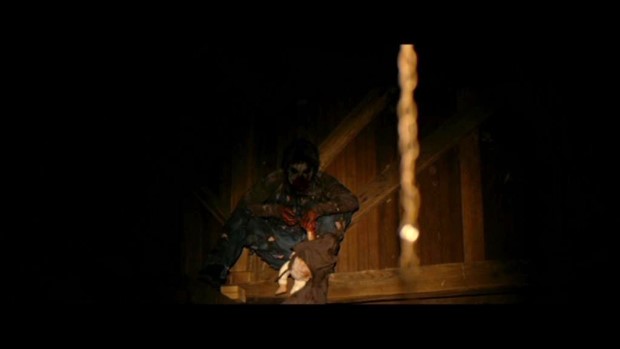 Along the way Mister and Martin welcome more additions to their “family” in the form of Belle, a pregnant woman hoping to make it to a safe township, and Willie, a Iraq war veteran who returned home in an ultimately futile attempt to quell the Vampiric uprising. The Vampires themselves resemble Zombies in more ways than one – Their voraciously hungry, dumb but tenaciously single-minded and use their numbers to overwhelm their prey. But, as in Romero’s films, they’re not the true monsters, with most of the atrocities being inflicted coming from the survivors themselves.

Stake Land is far from perfect but it is an interesting twist on what’s becoming a staid and tired genre, with many unique flourishes such as Vampire teeth and medicine being used as currency and the few remaining safe hamlets resembling towns from the Wild West. A major downside of cribbing extensively from Zombie films but transplanting the antagonists with Vampires is the lack of tension during daylight sequences due to the creatures being unable to withstand daylight. The film rectifies this somewhat with the inclusion of the cult and the threat of murderous scavengers but it does affect the pacing, particularly with the abundance of daylight scenes. 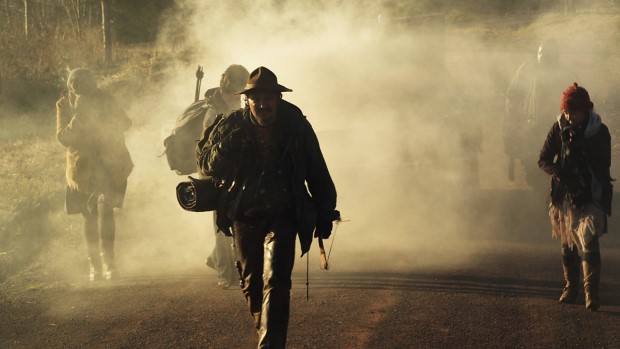 The cast are satisfactory and Kelly McGillis does a great job portraying the shell shocked Sister, but certain scenes can be a little hammy. Stake Land is ambitious in scope and unfortunately the budget doesn’t quite stretch enough to fully realise the concept, with some bad make up work and performances hampering its effectiveness. However, the direction is sound enough to offset these minor missteps and is actually quite accomplished for such a lowly budgeted production, with a picture quality that belies its origins and some innovative editing and production design, particularly the astute use of pre-existing environments to convey the desolation of a world that’s moved on. 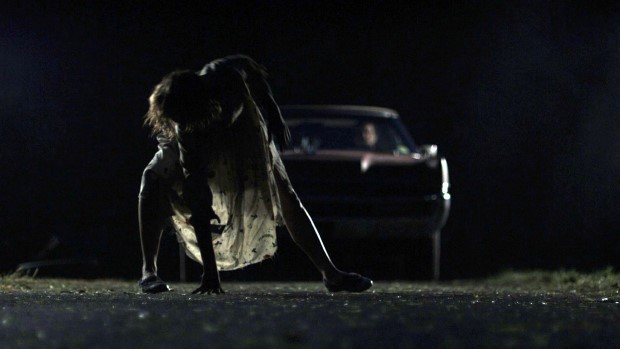 The entire production of Stake Land has been documented for posterity on this release, with featurettes pertaining to most aspects of the filmmaking process; included are a fly-on-the-wall look at the making of the film, features on both pre and post production, storyboards for an action packed scene and a look at the application of visual effects with a before and after comparison. Whilst engaging enough, particularly for anyone with an interest in the mechanics of low budget filmmaking, the making of comes off as being hastily edited and slightly unorganised, especially as there isn’t any indication of what’s going on via intercut interviews or narration, although the cast and crew do get to do some talking heads at around the halfway mark. 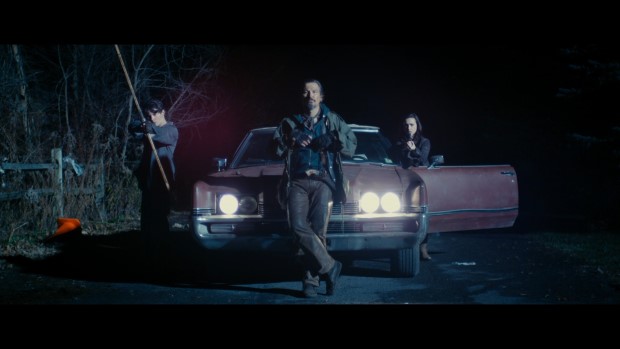 The webisodes offer little snippets of back story to the characters in the film, with the quality ranging from weak to on par with the film – Mister’s, Belle’s and the Butcher episodes stood out as the best to me. The commentaries are both enthusiastic affairs with multiple participants and are packed to the brim with interesting tidbits of information, such as Stake Land being originally conceived as a series of forty 8-minute webisodes, which goes some way to explain the disjointed nature of certain sections of the film; each one caters to a different audience, with the production focused second track focusing more on the technical side of things. Overall, a decent raft of extras that will keep fans busy long after the credits roll. 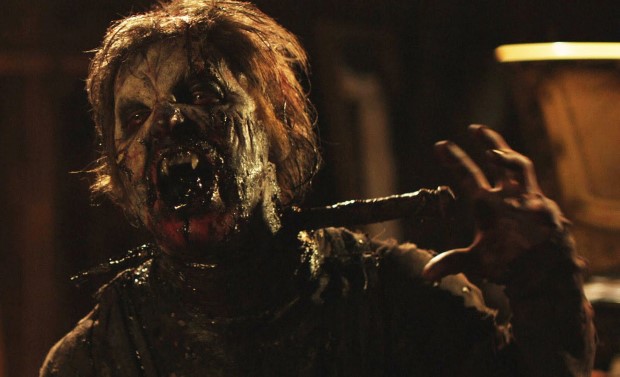 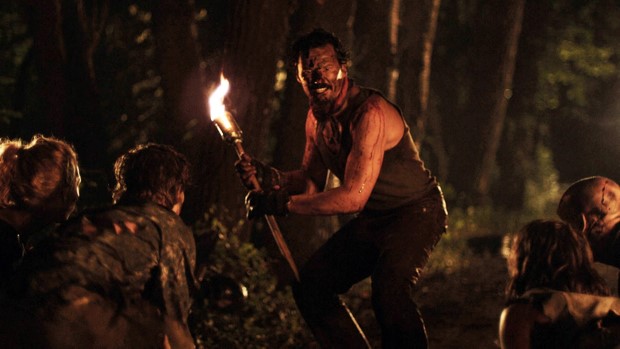 Owing more than a small debt to both the Zombie genre and post-apocalyptic fiction, Stake Land is a restrained effort that focuses on characterisation and the effects on the psyche that occurs when the world falls. Gorehounds won’t be disappointed though, with plenty of scenes of visceral violence to keep them interested between the more reflective moments. Don’t be fooled by the title’s similarity to Ruben Fleischer’s Zombieland though – Stake Land is far from a comedic foray into horror.

The dire imagery evokes the sensation of a fallen civilisation and the bleak tone throughout is accomplished through adept direction and production techniques. Certain facets of the story can come off as a little ham-fisted, and one of the characters seems to only serve as a Deus Ex Machina to inject momentum into the script before bizarrely becoming a powerful “Video Game Boss” in a scene that sits uncomfortably with what’s come before but for the most part the Stake Land’s rudder is guided with a deft hand that, most importantly, respects the genre. Although the film cribs extensively from The Road, it’s a unique beast unto itself due to its competent amalgamation of influences and, despite not quite reaching the profound heights it aspires to, Stake Land is a solid entry in the increasingly commercialised and idealised Vampire genre.