Summary: Spacebase Startopia is a nostalgic callback to early noughties gaming that feels too close to its source material to feel fresh

A Galaxy of Nostalgia

Nostalgia can be blinding, a sentiment I echoed throughout my time with Spacebase Startopia (or Starbase Spacetopia as I’ve called it for the last couple of weeks). It definitely feels like a successor to Startopia, a twenty year old management sim from the days where games were, mostly, really weird (here’s looking at you, Eidos) but I’m still not sure if it’s a necessary reboot. It’s strange, as much as I love strategy games, (and I’m definitely a sucker for the early noughties chic that Startopia envisages), I still can’t help but wonder; who asked for this?

But maybe it’s just me, I mean, who doesn’t want to manage a Spaceport, right? And if you’re screaming ‘I want to manage a hub for galactic travellers!’ at your screen, then Spacebase Startopia has all your whims and fancies covered. It’s a period of peace throughout the galaxy, and what better way to celebrate than opening a cylindrical space station for the galaxy’s residents to visit, relax and have fun in, all while complaining endlessly to the hub’s management; you.

I’m absolutely the type of person to jump straight into, well, anything usually, but if you take anything from this review, let it be this – play the tutorial. Spacebase Startopia has an exceptionally steep learning curve, and without learning the basics, it’s almost impossible to enjoy the game’s ten level campaign or free play modes. Even if you take my advice though, you’ll find yourself, on more than one occasion, scrambling with your controller, trying to work out a specific button combo you know you’ve done by accident before, but can’t quite figure now you actually need to pull it off. I imagine though, it transitions better on PC (go on, do your gloating), after all, it’s really hard to squeeze finicky controls onto restrictive console controllers, so it’s not an issue that’s limited to just Startopia. What I wasn’t expecting, however, was the initial motion sickness warning. It made sense though, as the circular motion of the station is initially jarring. It does however, become easier the more you play, and it’s much easier on the stomach than most VR games I’ve played. 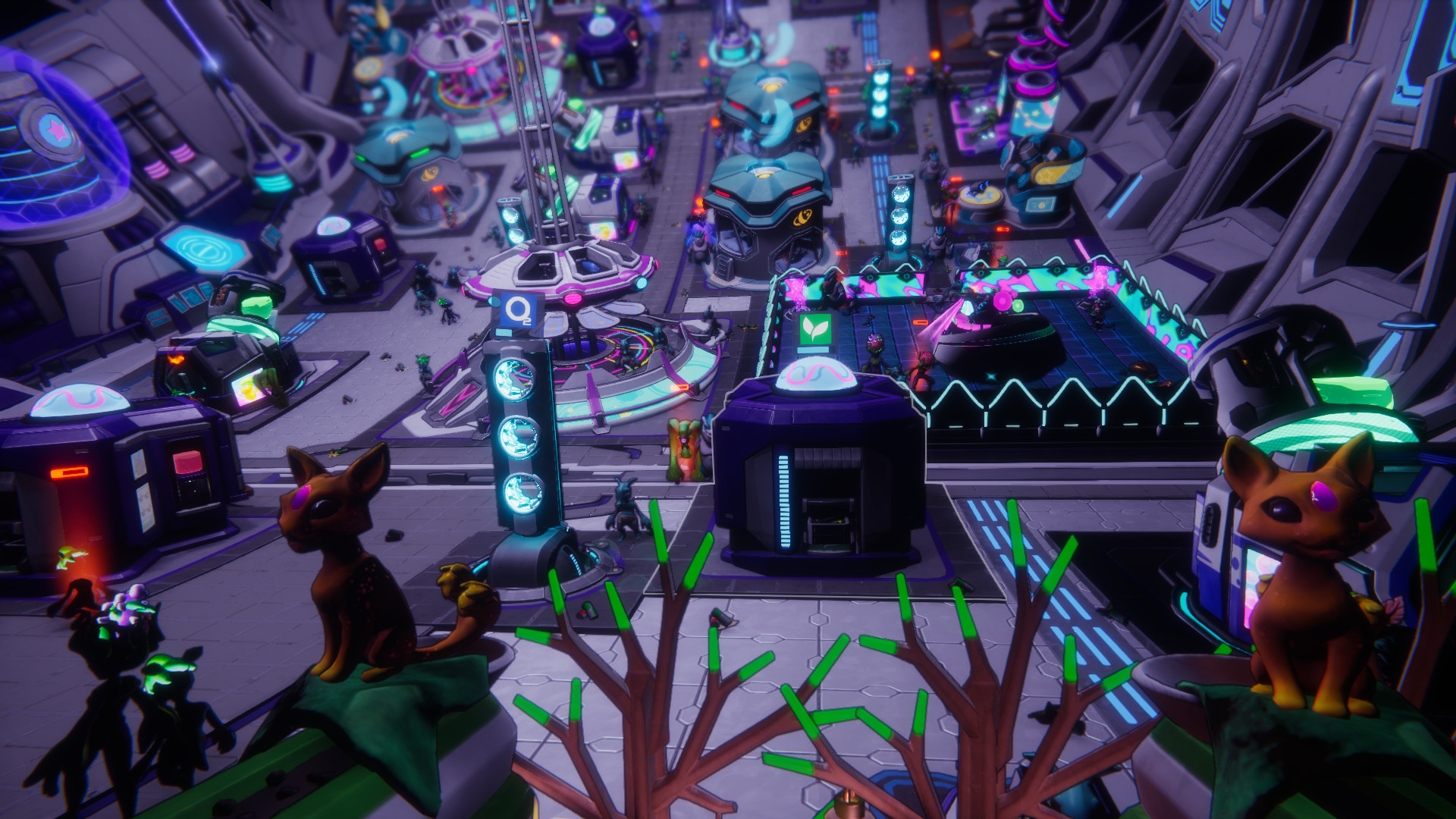 The circular layout is, however, an incredibly distinctive feature of Startopia. Unlike the boring, generic square layouts we’re used to in most building management sims, navigating the donut-shaped halls of your space station forces you to make interesting choices, especially regarding room placement. That being said, you’ll still need to expand your station constantly, but if you find yourself tight on space (and funds), most rooms can be chopped and changed to suit the needs of your station.

Your donut halls are also split into three very distinctive levels; sub, fun and bio. Board is the meat and potatoes of the game, where you’ll make medicine rooms, recycle waste, create brigs and even keep a beady eye on your population with a security station. No matter what mode you’re playing, you’ll almost always need at least one of every building, but often more of each when the constant stream of alien visitors gets overwhelming. You also need to manage their needs, such as keeping oxygen levels across the ship stable.

The bio deck is essentially a resource management area, where your employees harvest various flora to create oxygen, minerals, and everything else you might need to improve your station’s facilities. The area is testament to the game’s nostalgic but, actually quite pretty, graphics and character design. Watching your robot workers mill about, collecting boxes is joyous in the fibre-rich jungle bio, even if it’s one of the more confusing areas of the game. The tutorial is already sparse, but it barely touches on how to bioform (in hindsight, it’s easy, but you have to work it out for yourself), and, at least for the first hour or so of play, you’re extremely limited with space. It’s quite frustrating to have to dip back and forth between your decks, bioforming areas over and over to get the resources you need, and then having to change them back to spawn something else again.

It’s also the area you’ll likely notice how slow, and sometimes, completely incompetent, your workers can be. Fuzzies especially (your robot worker bees) are slow, meandering and struggle to prioritise jobs. Because you can’t manage their tasks individually, you have to wait for them to work out what to do next. It was much easier once I’d worked out how to  buy more Fuzzies, a task in itself that took longer than necessary to pull off. Luckily, you can manually do a lot of things, like collecting and depositing resources which is a godsend, as otherwise you’d be waiting forever for your workers to do it for you. 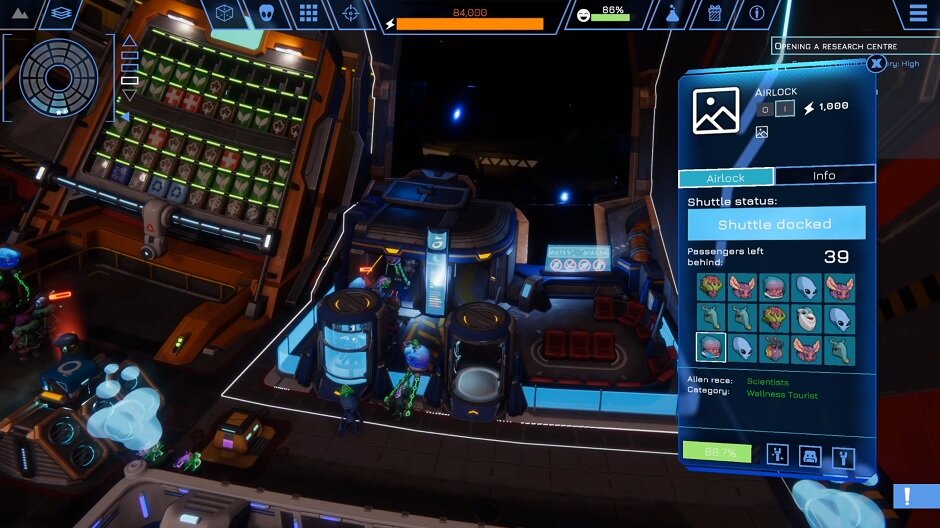 Visiting aliens can be hired, and each species has their own merits and uses, such as the trash compacting Talgor, and the security enforcing leviathans. I love that each species has their own job roles, and it’s adorable watching Bugs don their work attire and get to it. What isn’t cute though, is workers that randomly stop working to get food or take a break. It’s difficult to manage this, with the only alternative to letting your station fall to pieces employing more aliens than you need to make sure all bases are covered.

It’s especially frustrating that employees quit before you can come to a resolution. To be fair to the game, a pop up does appear in the right hand corner advising you that someone is frustrated, but it’s a big game, and managing three decks can be difficult, so, at least for the first few hours, expect to lose many workers to their own incompetence.

It’s not just employees that act bizarrely though, visitors can be just as frustrating. They simply don’t help themselves – they get bored, they moan and then leave in a grump, instead of visiting the fun deck for a boogie in the disco. It’s a problem I’ve had several times; I can fill up the ship with what my visitors want, but they never make the effort to help themselves. Sometimes, it’s easier to just boot them off your station than give them time to winge, bringing your score down. 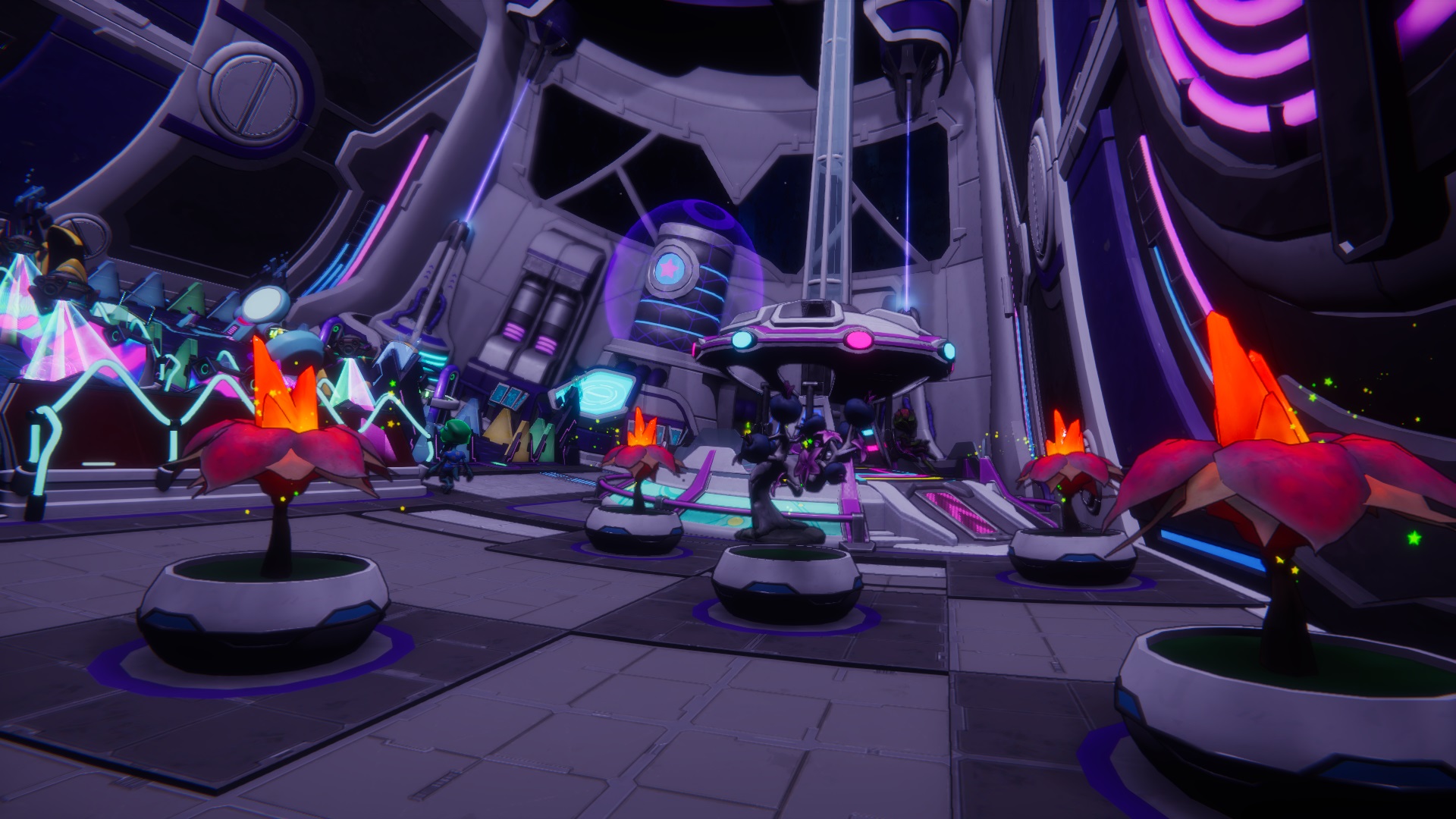 Speaking of the fun deck, ever wanted to see aliens visit an… alien cat cafe? Well, Spacebase Startopia has you covered! It’s just one of the many stupid but ultimately entertaining rooms you can erect. Ever wanted to watch a classic Grey alien gamble his fortune to win a cowboy hat? Well, now you can. It’s also the area I had the most fun decorating – there’s something especially joyous about planting a veritable army of alien-shaped wobbly arm guys between your disco and your arcades.

At its heart, Startopia is a business management game with great strategy roots. What it doesn’t do as well, however, is combat. There’s a basic RTS-style combat function that, to be honest, could have been completely eradicated without knocking the quality of the overall package. Don’t get me wrong, spending hard earned resources on unfathomably large mechs to fight ridiculous enemies is fun to watch, but it’s half-baked at best. Honestly, the resources could have been better spent elsewhere, like improving the tutorial or finessing the game’s AI.

I do think, buried underneath all the confusion and frustration, Spacebase is a fun game, but, for me, it’s not a big enough leap forward from the source material to really warrant a remake. Compared to, say, Oddworld: New ‘n’ Tasty (another reboot from that period of time where games were less about generic, bearded white men with guns and almost entirely about farting aliens), it feels more conservative and safe, but not fresh enough to feel like anything more than a lick of paint on a twenty year old body. It’s the same issue I had with the Commandos reboot – if you’re going to bring back ancient games, at least bring them kicking and screaming into the modern day, rather than with a whimper.

In a similar way to Journey to the Savage Planet (which, if you slept on, I wholeheartedly recommend), the games complete with a satire-spinning, sarcastic computer to torture you while you play. VAL is great, though, and it’s exactly the kind of character you want poking fun at you while you try and manage the absolute chaos that is Spacebase Startopia. She’s not just a hateful computer though, she has her own shop, where you can get useful items for VAL points, as well as occasionally forcing your hand with difficult choices, like spending hard earned energy (the games main currency) to keep security drones at full function, or sacrificing their integrity to save your resources. I like making these tough calls, and I enjoyed being jibed by VAL for the decisions I made even more.

I’m not done with Starbase Spacetopia (or whatever it’s called, I give up), I still want to nail the perfect base, especially now I’ve fully understood all the games systems, and for the most part, I’m having fun. On top of the campaign and free play mode there’s a perfectly serviceable multiplayer mode too, albeit the current small player base means it takes a while to locate a game. Is it the pinnacle of base management strategy games? No, far from it in fact, but it’s a more than serviceable space station sim that satisfies the itch for galactic domination.