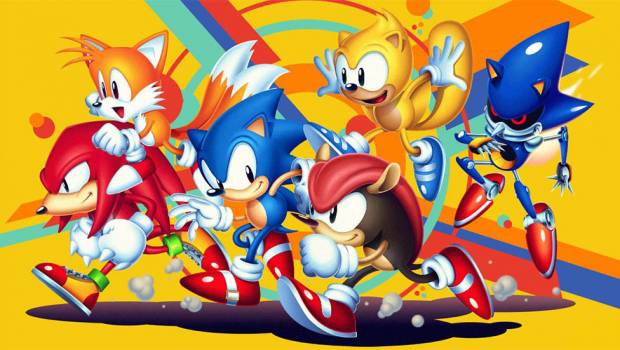 Summary: Whether you grab the much anticipated physical release or are content with just downloading the Encore DLC pack, Sonic Mania Plus is the definitive version of Sonic’s return to form

The last two decades or so haven’t been all that kind to Sega’s Blue Blur; once associated with titles that could arguably stand almost shoulder to shoulder with the classis Super Mario titles, since the mid-Nineties the quality of Sonic’s titles took a noticeably drastic downward turn as the series struggled to make the transition from 2D to 3D.

Ironically enough, it was a return to that original 16-bit style that finally gave fans what is without a doubt the best Sonic title in over twenty years, eschewing the increasingly convoluted mythology and cast of characters and reverting to the classic gameplay and design philosophy that fans grew to love from the original trilogy.

What was even more amazing is the fact that Sonic Mania was completed by an incredibly small team of three yet managed to far surpass the efforts of Sonic Team’s dismal Sonic Forces, yet another failed attempt to bring the hedgehog hero into the third dimension that released shortly after Mania blew fans away. 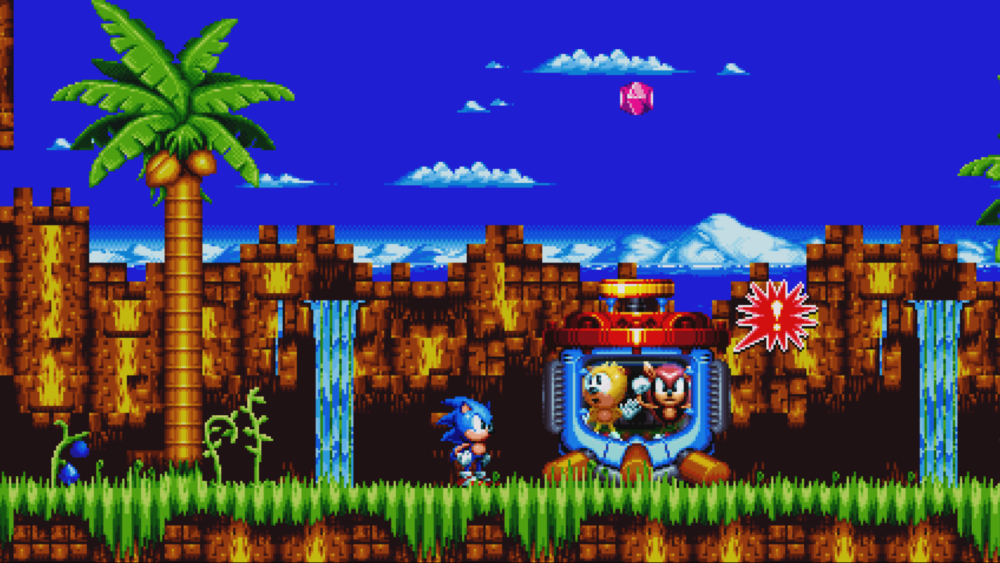 Sonic Mania Plus is the retail release of Christian Whitehead and company’s love letter to the classic Mega Drive iterations, coming to store shelves with a bunch of new content to accompany the physical disc.

But what about those of us who purchased the game upon its initial digital-only release? For the small sum of $7.55 you can purchase all of the new additions via the Encore DLC pack, so rest assured that you won’t be locked out of anything without dropping the dosh on an entirely new copy. 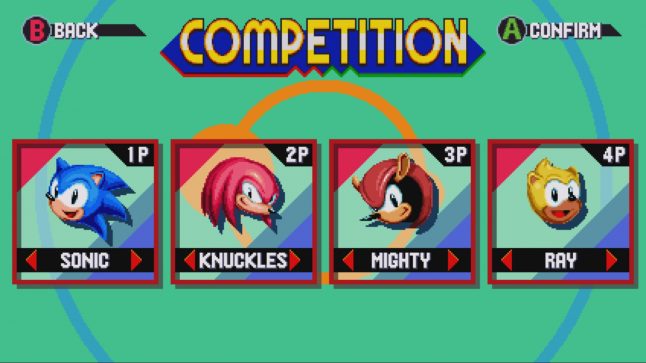 Probably the biggest addition to the game is the inclusion of two more playable characters, bringing the grand total up to five; Ray the Flying Squirrel and Mighty the Armadillo join series stalwarts Sonic, Tails and Knuckles, each bringing their own unique skillsets to the party.

Ray bears some similarities to Tails, using his glide ability to access alternate paths and soar above enemies. It takes a little bit of time to get used to maintaining Ray’s momentum, however, requiring you to master dipping up and down in order to prolong the glide. 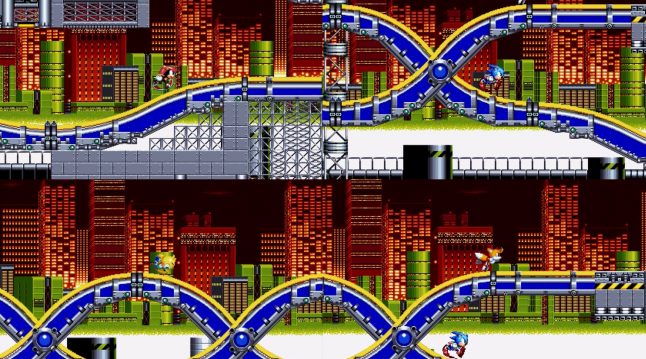 Mighty is a little easier to get to grips with, boasting a form that makes him impervious to damage and possessing a downward slam attack that differs slightly from Sonic’s by not triggering a spin dash; the former ability is certainly the more useful, entirely changing up how you approach the game rather than just shaking up traversal mechanics.

For example, spikes and other obstacles can now be touched without resulting in death or a loss of rings, as long as you’re in Mighty’s ball form, making the character a more forgiving option for younger players and those who may struggle with Mania’s difficulty. 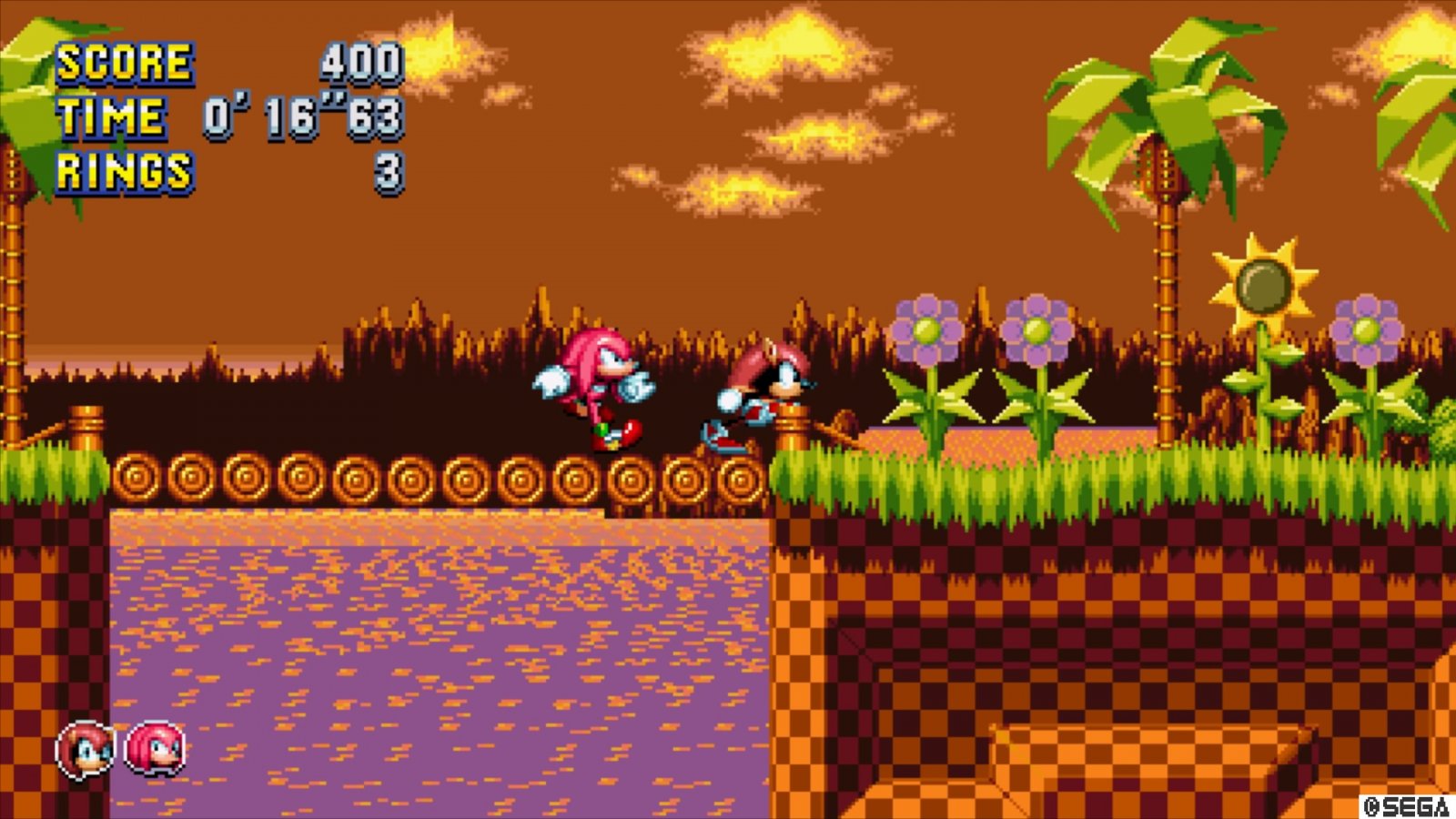 Both of the new characters offer up fresh means of getting through the stages, with the remixed mania campaign providing new routes through the original stages for the new additions to take advantage of.

Encore mode also offers some changes to the life system and entirely remixed levels to play through, giving players a pair of characters that they can swap between at will and others to collect but limiting the amount of lives to only the characters in your possession; you can’t stockpile lives here, with the maximum always being your five characters, and dying in an area here means that the next character in line will pick up immediately where your last one perished. 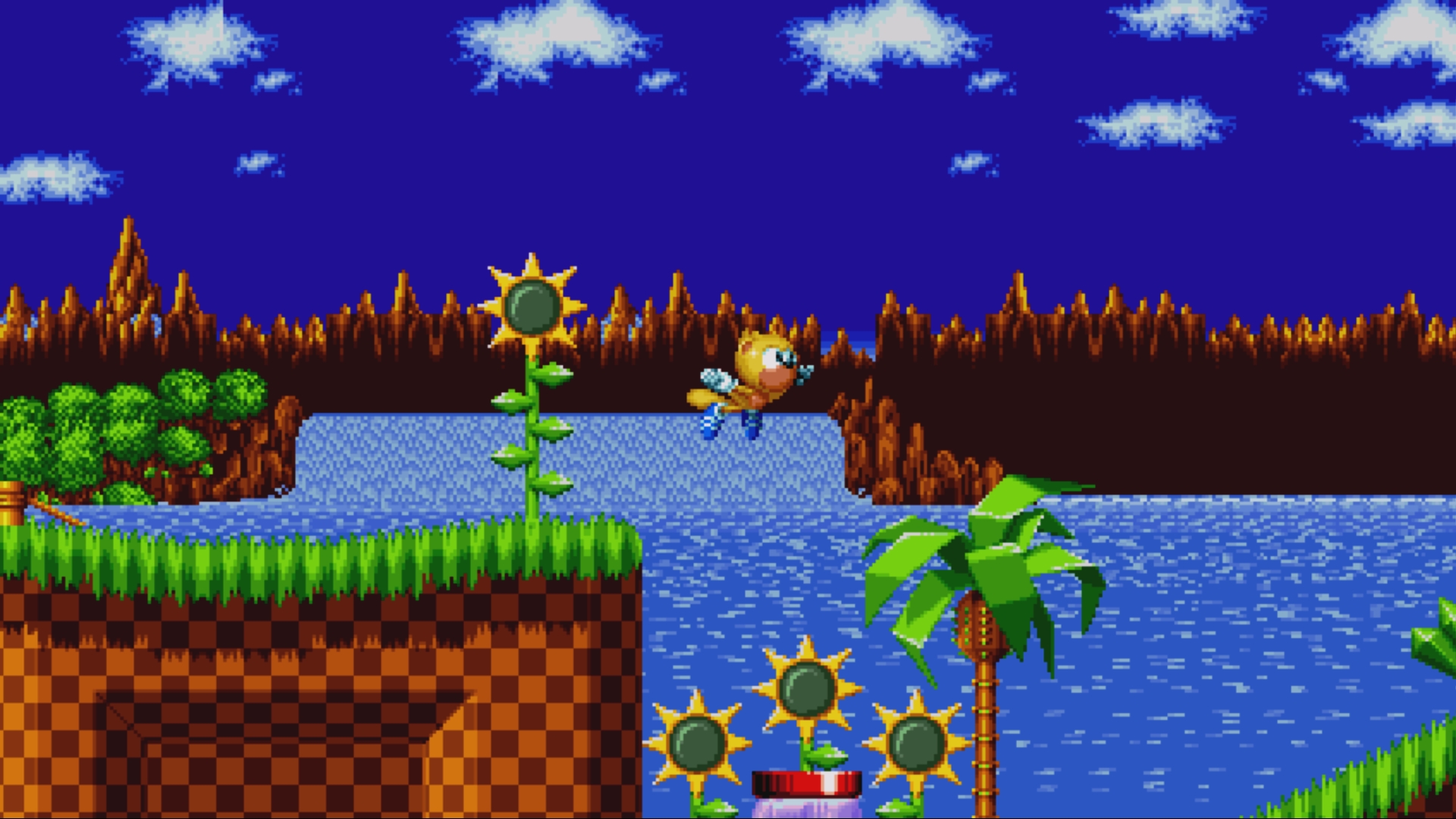 It’s actually a pretty big change to the way in which you approach these games, upping the challenge level and forcing you to maintain your limited reserves for as long as you can rather than simply blasting through the stage, secure in the knowledge that you have eight lives in your back pocket if things were to go south.

There’s also an entirely new mini-game sequence which can allow you to earn back lost characters and gain other useful power ups, seeing Sonic bounce around within a pinball machine rather than following blue spheres or chasing UFOs. 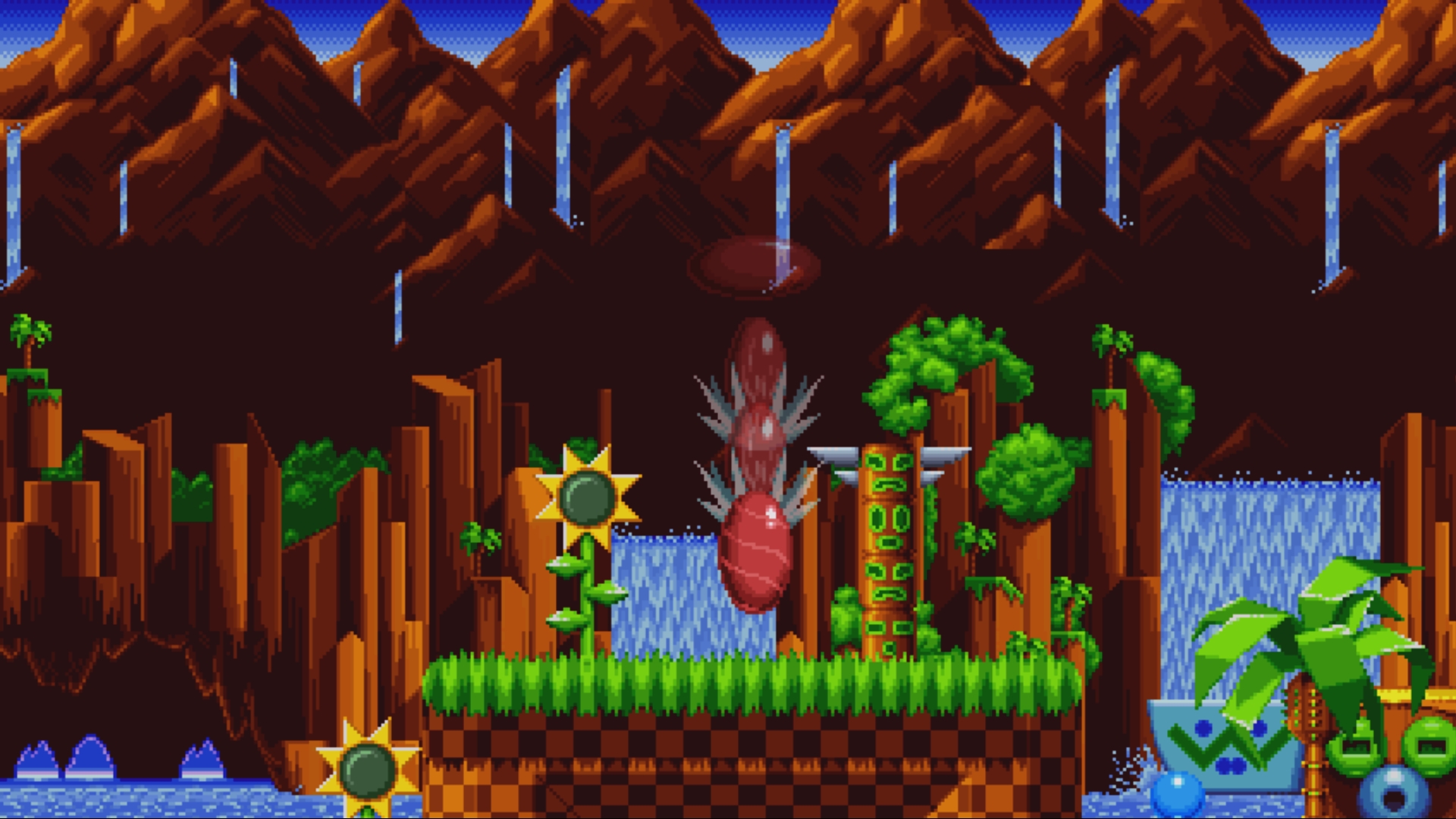 I personally found these areas a tad more frustrating than those featured in the base game, mainly due to the reduced control over your character, but any entirely new content is always welcome when it complements such an accomplished package as this.

Time Attack now features the remixed Encore stages and leaderboards for the new characters and there’s now the option for four players to go head to head in Competition mode, whilst the vanilla Mania campaign features major tweaks to certain boss battles and level transitions alongside the new paths for Mighty and Ray to take. 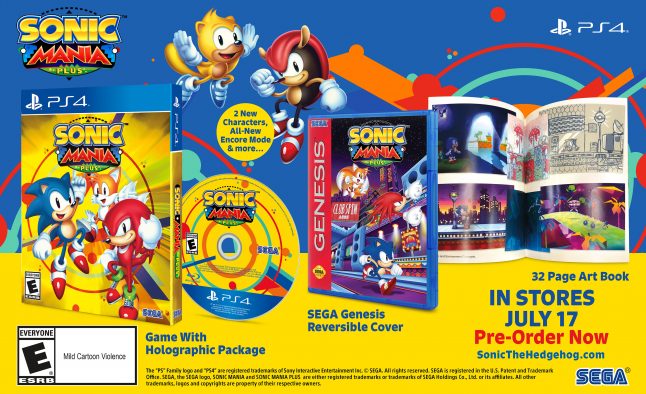 Sonic Mania was easily the best title to star Sega’s mascot in years and Sonic Mania Plus builds upon these foundations to give fans a more refined and content packed version of the Blue Blur’s triumphant return to two dimensions.

The addition of Ray and Mighty offer up new ways to get through the stages and the remixed levels found in Encore mode, tweaks to existing modes and entirely new content make this a worthwhile purchase for those looking to extend their time with Sonic Mania as well as those who haven’t yet played through the game.

Whether you grab the much anticipated physical release or are content with just downloading the Encore DLC pack, Sonic Mania Plus is the definitive version of Sonic’s return to form and is a must buy for anyone who spent their childhood battling the evil forces of Dr. Robotnik… Or The Artist Formerly Known as Eggman, or whatever he’s calling himself these days. 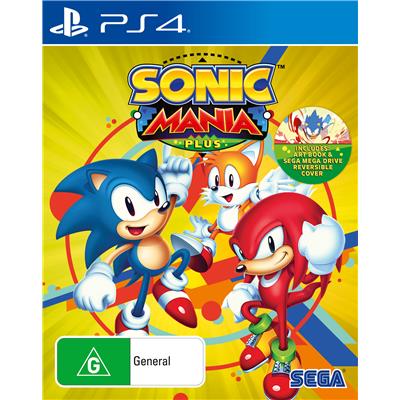