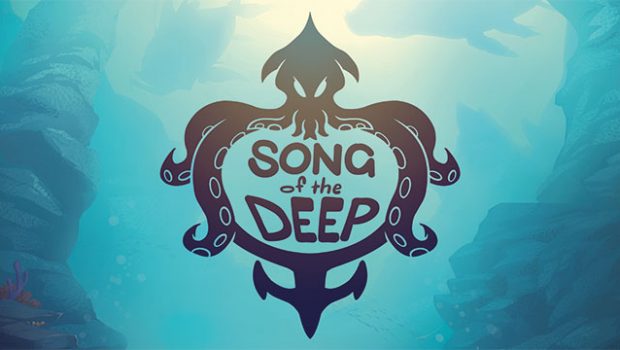 Song of the Deep PS4 Review

Summary: If you’re a fan of games like Guacamelee or the two titles the genre derives its name from, then Song of the Deep really deserves your time.

Song of the Deep is a surprisingly more intimate title than what we’ve come to expect from Insomniac Games, the developers behind Sunset Overdrive and the Ratchet and Clank series.

Eschewing the big budget action and platforming spectacle that usually define their games, Song of the Deep is instead a small, considered take on the Metroidvania genre, tasking players with descending into the unknown depths of a fantastical undersea setting in search of their missing father. 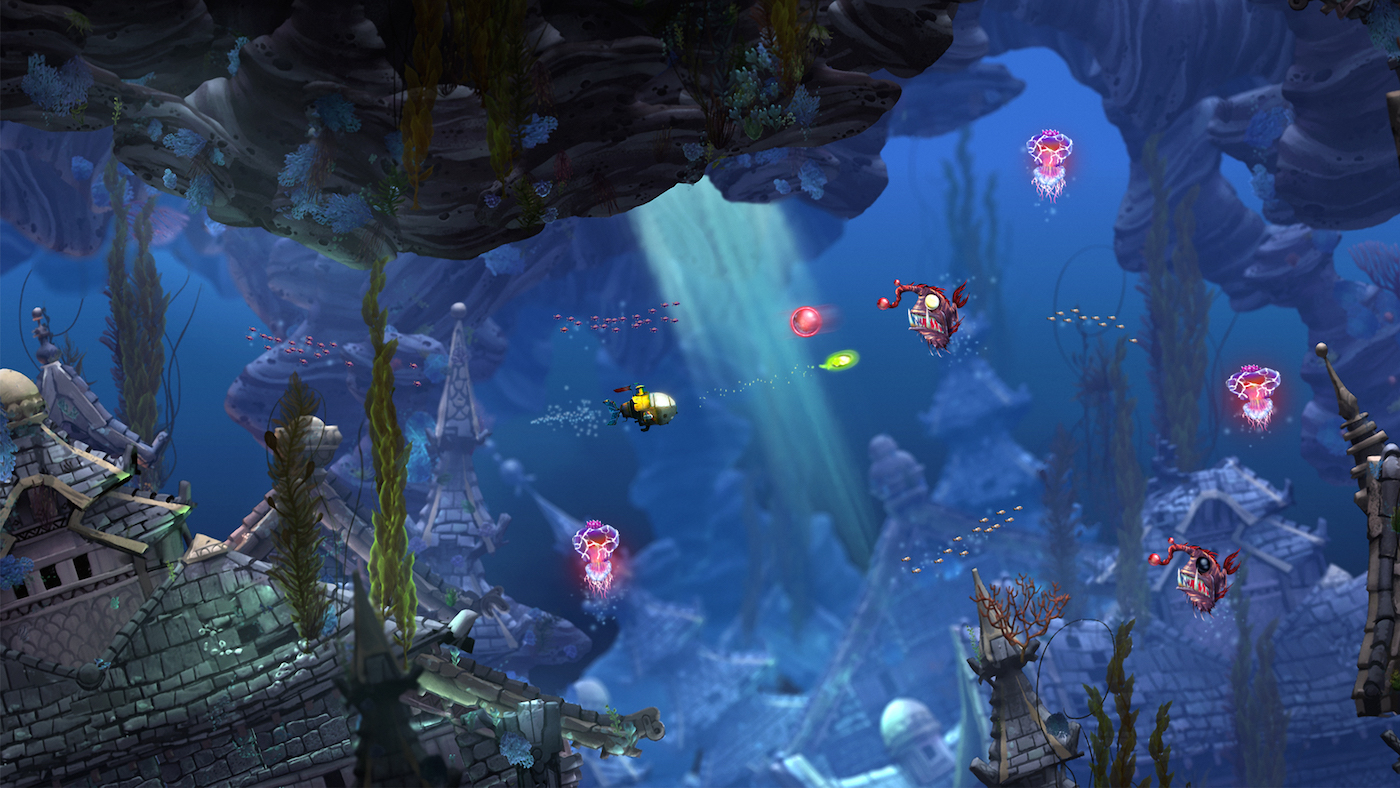 Taking inspiration from Irish mythology, this introspective tale sees players taking control of Merryn, a young girl who dotes on her seafaring father and delights in being regaled by the tall tales of his time out at sea and the mythical creatures and environments he’s apparently encountered during his travels.

Understandably distraught when he fails to come home after a fishing expedition, Merryn takes it upon herself to seek out her father after having a vision of him trapped within the underwater realm. Mechanically gifted, young Merryn builds herself a submarine capable of exploring the unknown lands beneath the waves and sets out on a rescue mission that will reveal that there was a lot more truth to her father’s stories than she could have ever imagined. 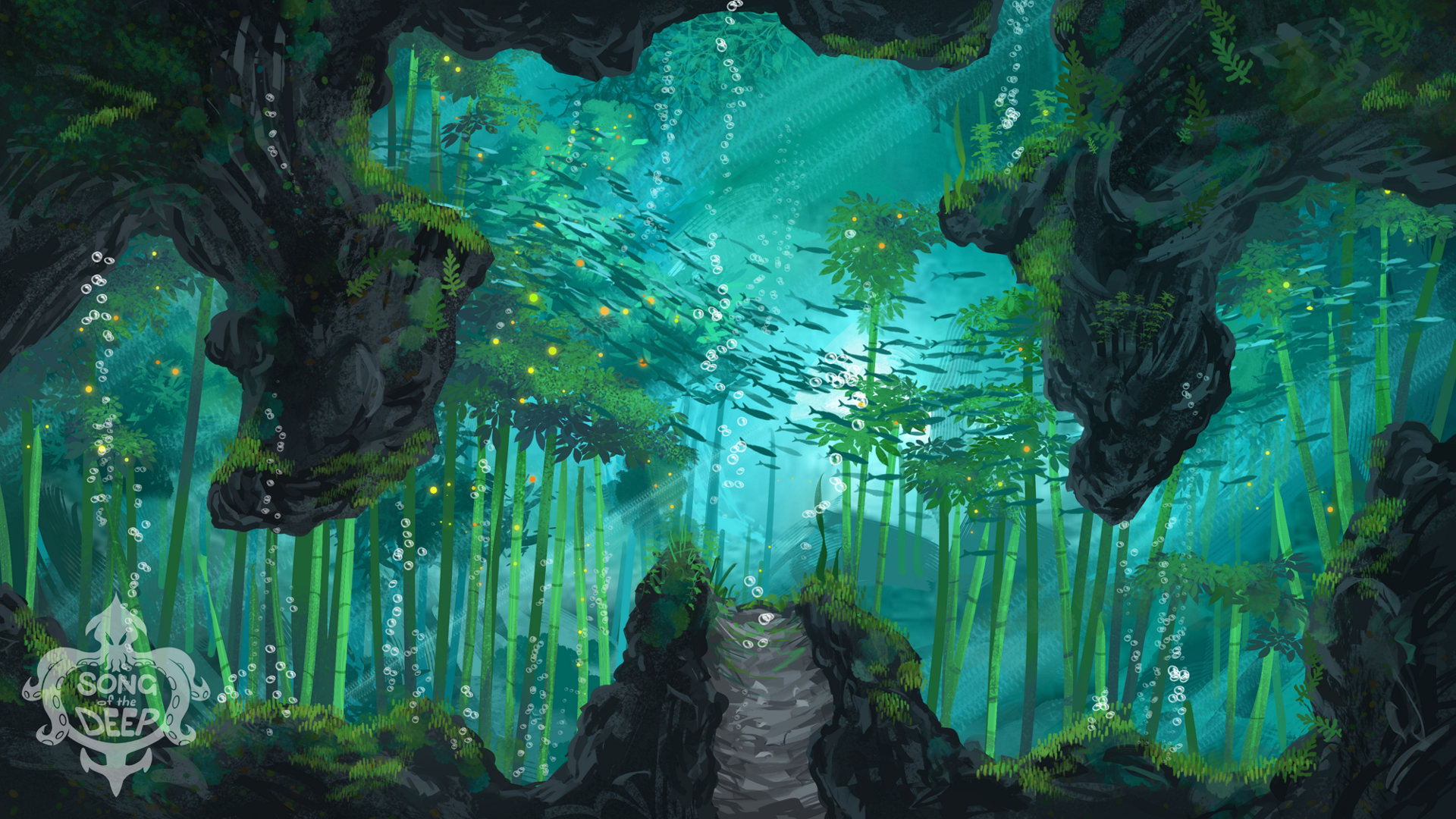 At its core, Song of the Deep is a whimsical 2D side-scrolling adventure that sees you captain your vessel through different interconnected areas, collecting new upgrades and items to attach to your vehicle and then returning to previously inaccessible areas and using your newfound tools to bypass the barrier that originally impeded your progress… So, basically, it plays just like you’d expect a Metroidvania title to play.

As is common with these kinds of games, the focus is much more set upon exploring and puzzle solving rather than combat, although you will need to vanquish countless foes here and there in order to progress. This is achieved by using the claw attachment on your ship to strike enemies or, later on, launching torpedoes; there are a nice selection of items to discover during your journey and you can use them in conjunction with your vessel at times, such as grabbing onto torpedoes with your claw and using it to spin your vehicle to clear enemies. 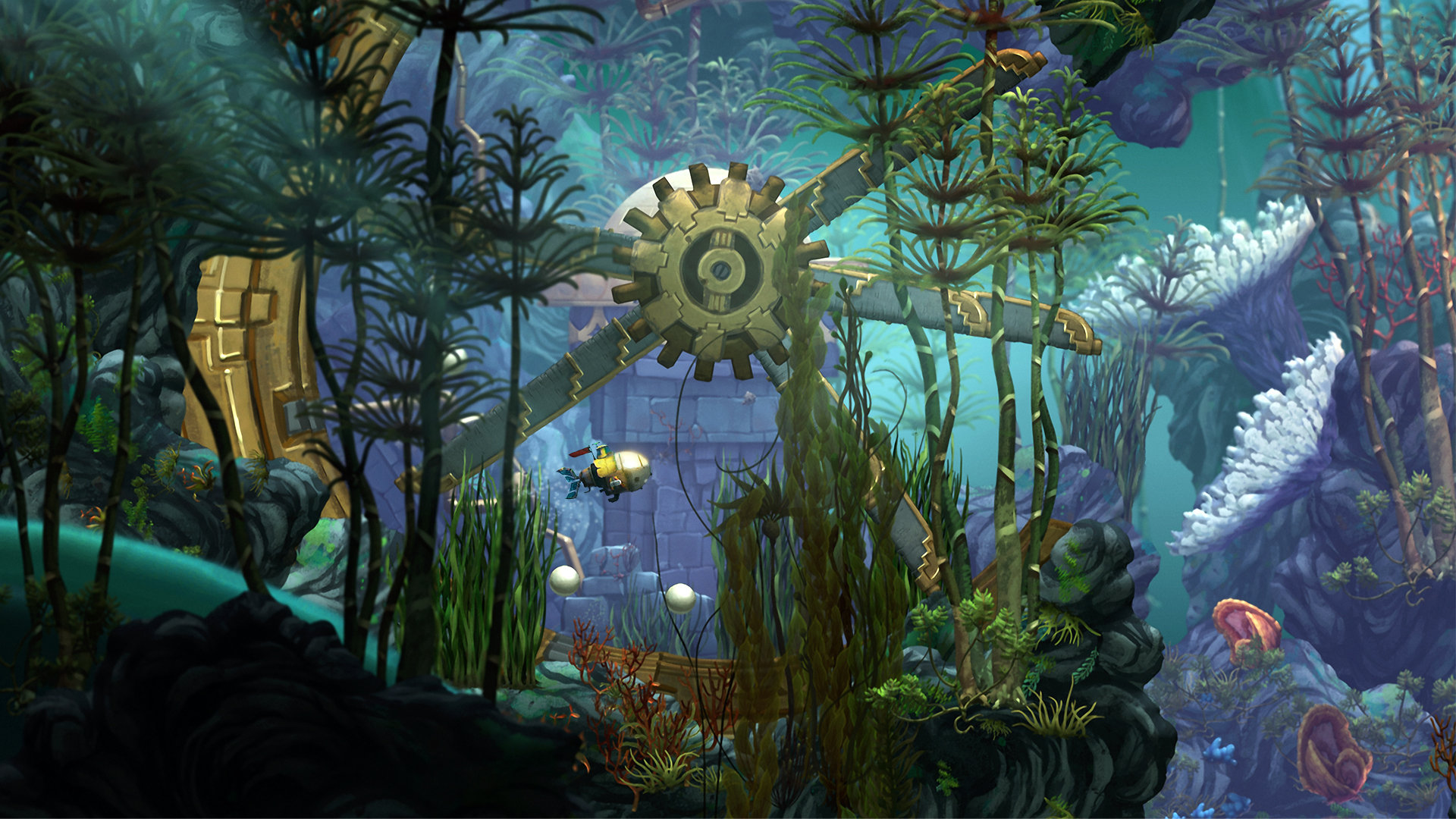 You’ll also gain access to a sonar pulse which can used to destroy glass cylinders blocking your way, headlights that illuminate gloomy areas and frighten away a phalanx of jellyfish acting as a roadblock as well, a boost that can help you swim against the current as well as later gaining the ability to exit your vehicle and guide Merryn through narrow passages that your submarine would have no hope of squeezing through.

You can discover these upgrades lying scattered around the environments themselves or pick up coins left behind by defeated enemies or hidden in treasure chests to purchase from a kindly Hermit Crab merchant. 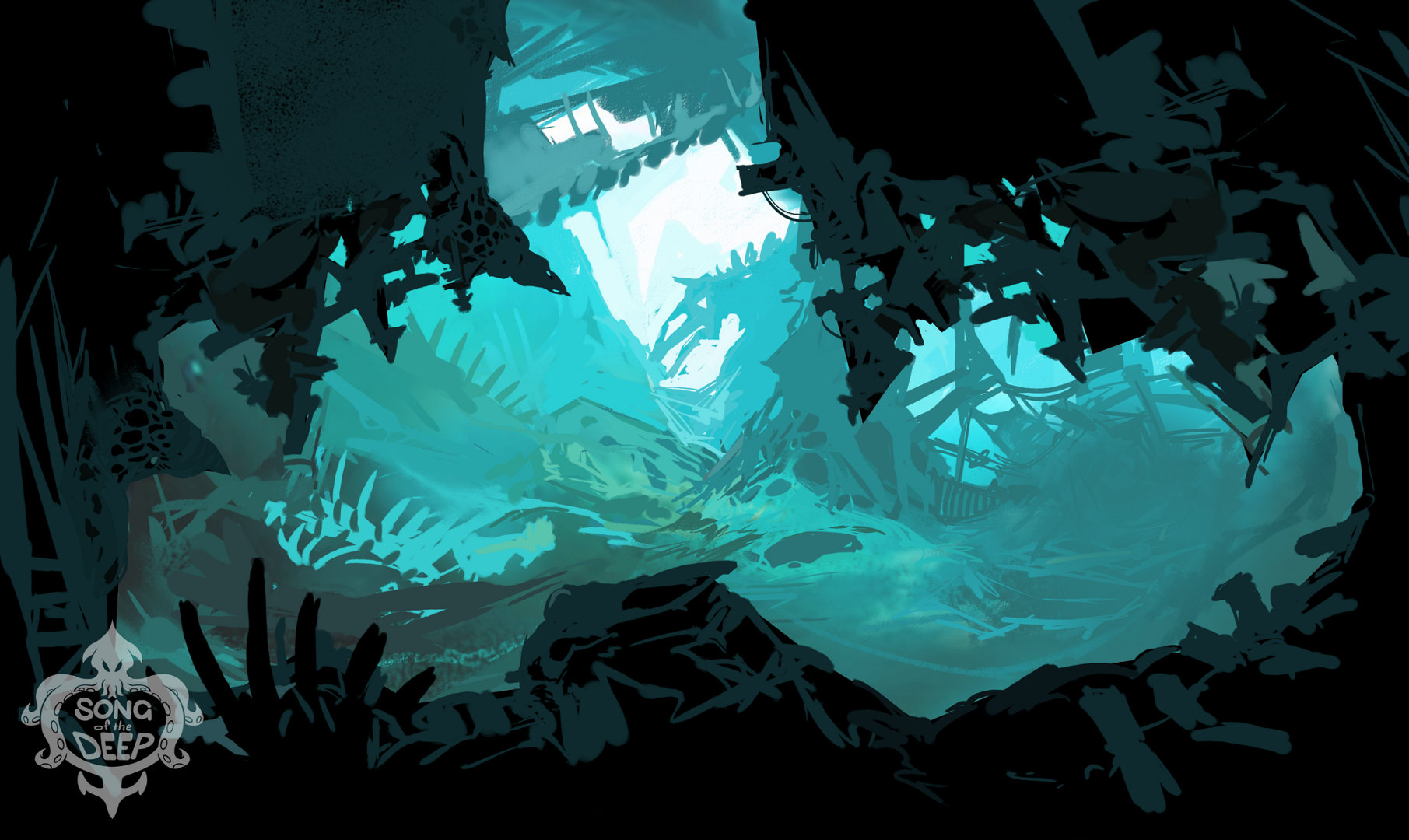 The difficulty is nicely balanced throughout the game and I never reached a point where I struggled with the combat at all, even during the boss encounters. That doesn’t mean that there aren’t difficulty spikes entirely, however, though most of these will come from struggling with the controls during physics based puzzles.

You’ll often be tasked with ferrying a floating mine to an area so that you can blow up an obstacle and the controls, whilst perfectly suited to guiding your ship around the environment, aren’t really tight enough to cope with mine transportation. More often than not it would take me multiple tries to guide a mine through narrow hallways without setting it off and then, when I’d finally managed to pull that tricky feat off, I would be unable to position the mine correctly and it would explode with the intended target just outside of the blast radius. 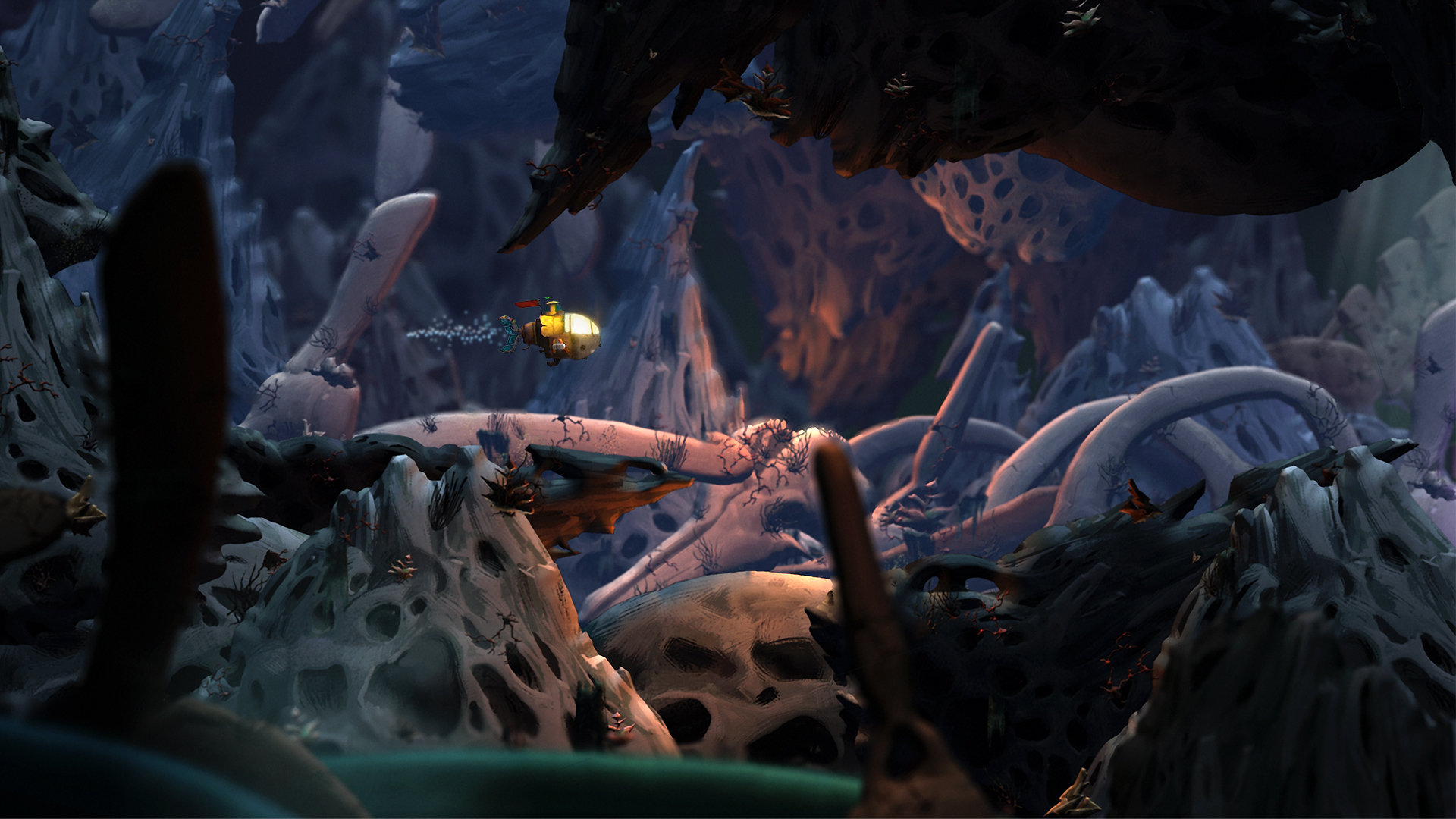 Also a source of frustration are the puzzles that crop up in the latter half of the game. It’s not that it’s hard to figure out how to complete these puzzles but, rather, it’s just painstakingly difficult actually doing so, again mainly due to the floaty controls.

Enemy variation also drops off in the last few hours, with Insomniac content to simply throw different coloured versions of previously encountered jellyfish and sea urchins at the player; this is a minor quibble but the game really could have done with a few more enemy types in order to force players to adopt different strategies rather than simply making the battles more one of attrition than tactics. 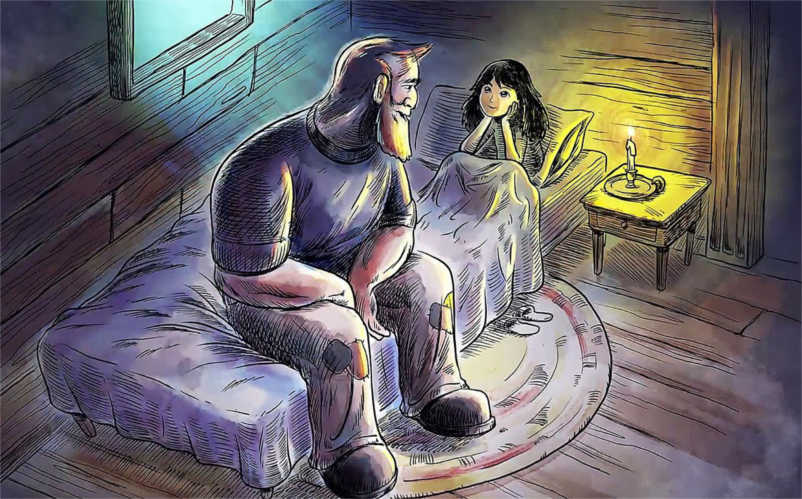 Song of the Deep is a gorgeous game, with a vividly realised world that takes full advantage of the capabilities of the PlayStation’s hardware. Presented as cartoonish 2.5D graphics, the game boasts a quality of visual depth that makes each area look multi-layered and vibrant with sea life flitting about the place and clumps of seaweed swaying lazily with the current. Unfortunately, the game does suffer some pretty major frame rate drops at times.

The story is punctuated by narration beats that provide a bit of exposition as you explore the seabed. The voice acting is top notch and gives the game a sensation of being a storybook read aloud to a child settling down for the night. The soundtrack has just the right amount of wide-eyed wonder to it and is quite pleasant to listen to, perfectly evoking the fairy-tale like nature of the plot. 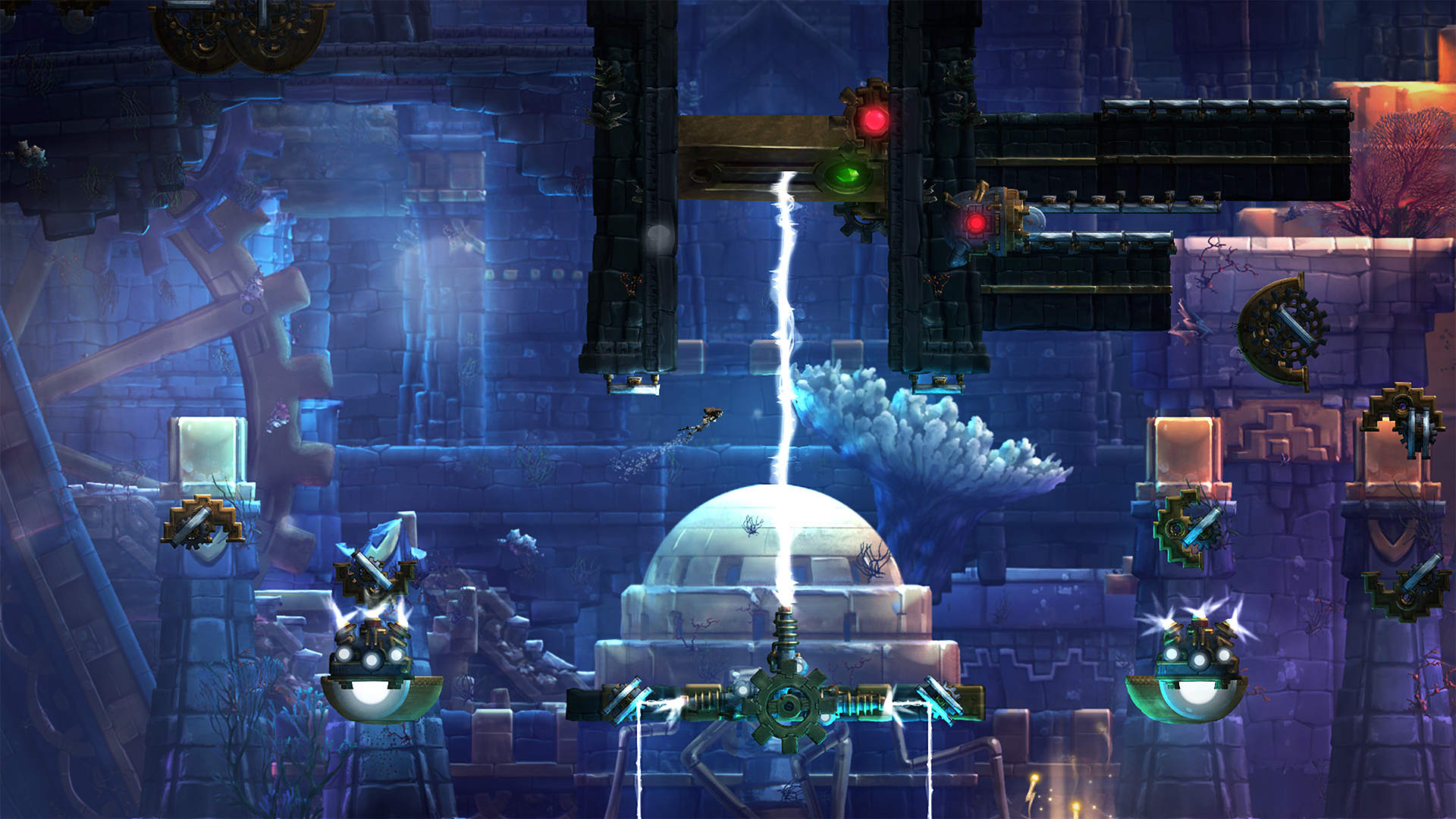 Despite some of the puzzles becoming a major pain in the last few hours of the game, it’s pretty easy to recommend Song of the Deep. It’s a relaxing undersea adventure with a compelling storyline and an earnest and endearing protagonist that you genuinely want to help with completing the task of locating her father.

Exploring the ethereal underwater realms is a joy and the levels are well designed and seamlessly lead into one another, with interconnected pathways, hidden tunnels and a fast-travel system that helps alleviate the immense backtracking you’ll have to undertake so that it never feels monotonous.

The storybook quality of the narrative hides a beautiful and mature journey of self-discovery and, along with the visuals, are the game’s strongest elements. I’m a sucker for fantasy tales with an element of innocence to them and Song of the Deep effortlessly nails that aesthetic. 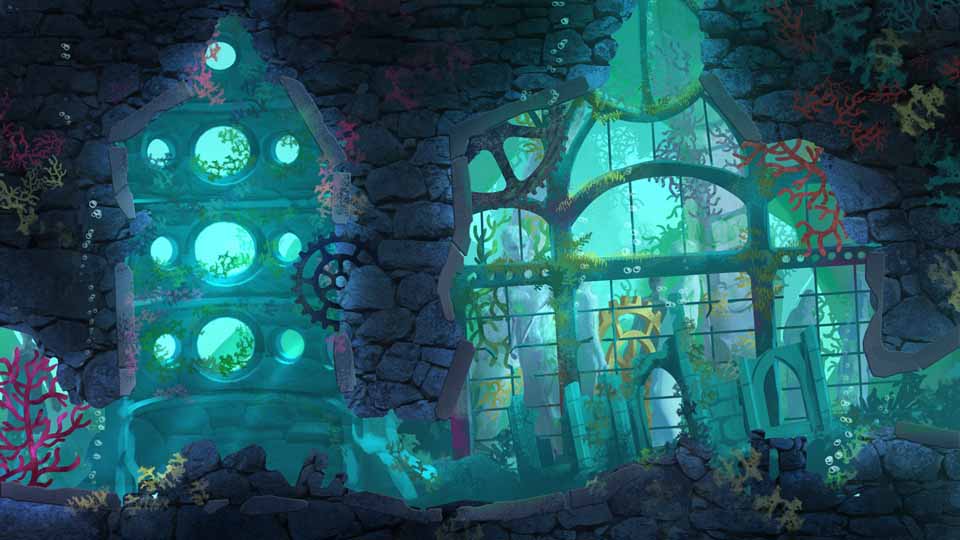 The puzzles can become a tad annoying, particularly the light direction ones, and the controls aren’t as tight as I would like when it comes to moving mines, but I find myself overlooking these flaws in order to appreciate the game for the stunning vistas it lets me explore and the sense of satisfaction felt when using a recently discovered tool to open up a previously closed off section of the map.

If you’re a fan of games like Guacamelee or the two titles the genre derives its name from, then Song of the Deep really deserves your time, if only to show the industry that smaller, esoteric titles like this can, and should, be applauded and experienced. 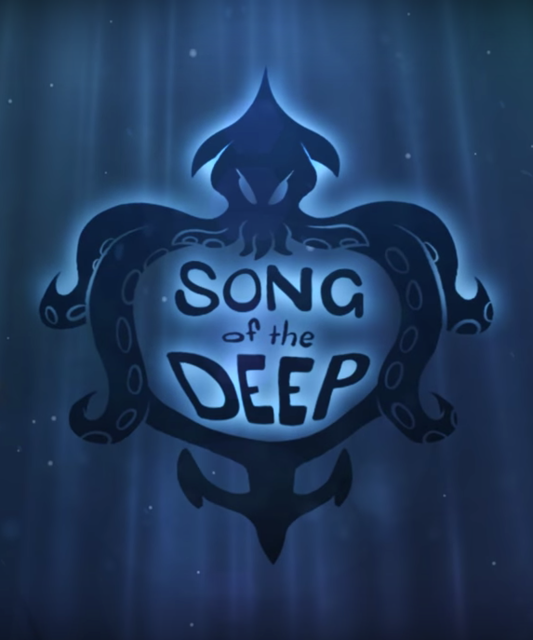