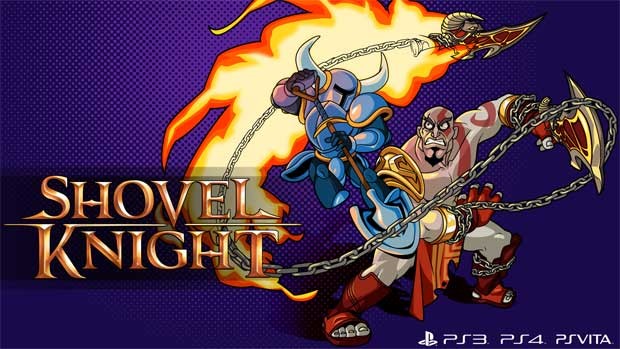 Summary: Shovel Knight perfectly encapsulates what is so great about playing modern-retro games inspired by the 8-bit era of the 1980s and early 90’s without being derivative or trapped in the past.

Shovel Knight is the prime example of a game paying ample homage to the retro era of decades past without exploiting or relying on gamer nostalgia. As a 2D-scroller with 8-bit graphics in an increasingly crowded market of high-quality indie efforts, it stands out as an authentic, original and quirky platforming adventure that evokes that same special childhood nostalgia we all get when seeing NES-era graphics – while still amazing players with straight-forward, streamlined gameplay not stuck in the past. 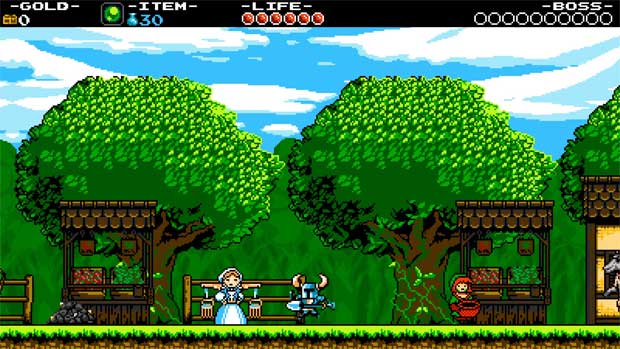 The tale of the eponymous Shovel Knight is simply told when first creating a new file; our hero and the Shield Knight journeyed across the land with each other in a blissful partnership until they discovered a cursed amulet in the Tower of Fate. The Shield Knight is taken over by the artefact and abandons Shovel Knight inside the sealed tower. While Shovel Knight escapes, he is devastated and exiles himself before returning to save the land when the Enchantress and the eight knights of The Order of No Quarters spreads evil across the world in his absence.

The simple premise sets up the main quest of journeying across a world map and fighting through a series of levels to progress, similar to old-school platforming titles. Gameplay involves the classic formula of jumping across obstacles, solving puzzles, collecting items and discovering cleverly hidden secrets in several themed stages full of anthropomorphic, medieval and mythological enemies who you need to defeat or pass to beat the level. Major levels revolve around a Knight of The Order of No Quarter, who act as special boss fights with unique powers that test your reflexes and timing greatly. There are also special levels in-between where you take on challengers who appear on the world map. 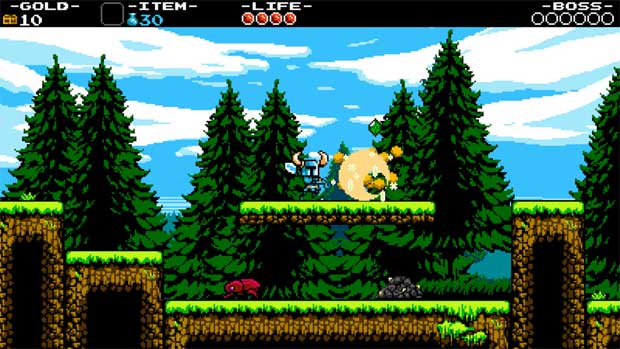 How Shovel Knight executes the formula and melds all of this together is what makes it stand out from the crowd. Our hero’s shovel is the central mechanic which gives Shovel Knight its unique personality. It acts as both a versatile tool and weapon, used to dig up the ton of treasure scattered across stages in stockpiles, to unlock hidden treasure boxes, musical note sheets (to unlock music tracks) and whack a enemies who also drop loot. Levels are full of gold and jewels to find, often behind hidden illusionary walls which need to be smacked with your shovel to be destroyed and for loot to be revealed.

Treasure hunting is widely encouraged, as all loot act as valuable currency to spend in the local villages, with NPCs offering upgrades to your base health and magic bars, armour and shovel improvements for additional skills, and special relics and secondary items which can help you progress with powers such as temporary invincibility and long-range projectiles.

Using the shovel to battle enemies is fun, with combat being position-based; your foes can knock you back into hazardous obstacles or bottomless pits, making timing your attacks crucial to progress if you can’t simply dodge them or need the additional treasure they drop upon defeat. Enemies are more useful as trampolines, however; by using the shovel on enemies below, you can get an additional jump boost to otherwise hard-to-reach or inaccessible loot and hidden areas you can’t normally access with the basic jump, adding an additional layer of strategy when approaching the newest area.

Each stage has a series of checkpoints keeping backtracking to a minimum and where you will respawn should you die; it’s here that Shovel Knight takes some inspiration from games like Dark Souls with a satisfying risk-reward mechanic. If you’re confident enough, you can destroy a checkpoint to be rewarded a huge pile of gold, but any future deaths will push you further back to the start of the level, and late-game with more obstacles, enemies and alternate pathways, it does get incredibly difficult and time-consuming to backtrack. 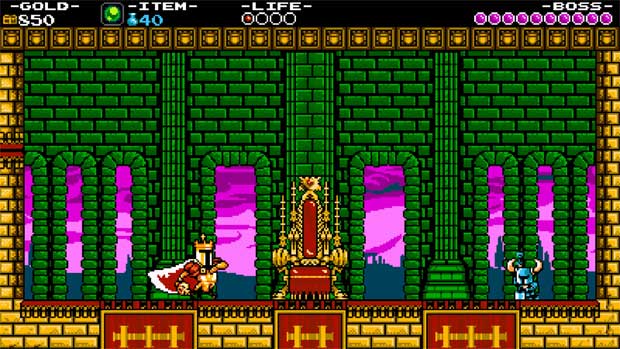 While there’s also no lives system, should you die, part of your hard-earned loot will drop at the scene of your death, giving you a chance to retrieve it but increasing the risk of further losses. It’s a challenging, rewarding system that leads to tactical decision-making on how best to finish the stage while retaining the majority of your cash.

Shovel Knight is jam-packed full of content for those looking for a meaty platformer; New Game Plus mode unlocks upon completion with increased enemy difficulty but with upgrades and relics carried over. Challenge Mode lets you complete a series of increasingly difficult platforming tasks, the password system lets you unlock special cheats and additional modes and there’s several additional special features depending on the platform you own Shovel Knight on.

PlayStation players can enjoy an exclusive boss fight against Kratos from the God of War series, while Xbox One gamers face off against Battletoads. The Nintendo 3DS and Wii U owners arguably get the best support; the former incorporates a special StreetPass mode and the latter allowing players to leave notes behind for players not unlike Dark Souls, and both get touch-screen support. Both will have Amiibo support with the Shovel Knight amiibo figure, unlocking a co-op mode for the Wii U and customisable armour and stages for both versions. 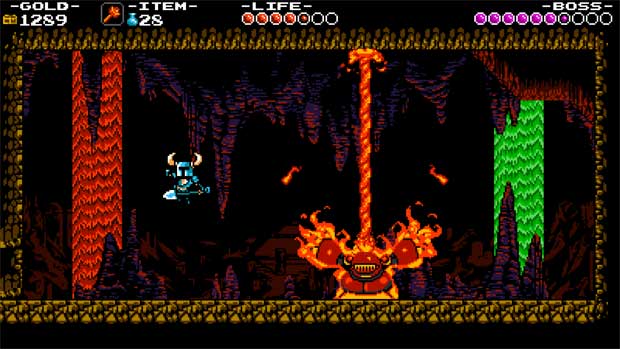 Perhaps the single most impressive thing of the package is the substantial post-release DLC it’s receiving from Yacht Club Games – which is all free. The recently released ‘Plague of Shadows’ puts players in the role of Plague Knight, one of the knights of the Order of No Quarter, in his own devious campaign which introduces a whole new gameplay system thanks to Plague Knight’s unique weaponry, arcana and bombs, as well as new challenges.

Shovel Knight perfectly encapsulates what is so great about playing modern-retro games inspired by the 8-bit era of the 1980s and early 90’s without being derivative or trapped in the past. Yacht Club Games deliver an engrossing, original platformer that isn’t complacent in being stuck in the past, but focused on moving the modern-retro genre forward. It’s a recommended buy for any gamer who is craving a high-quality 2D side-scrollers packed with content, especially now with the first substantial free DLC expansion, Plague of Shadows, adding to the already impressive package.