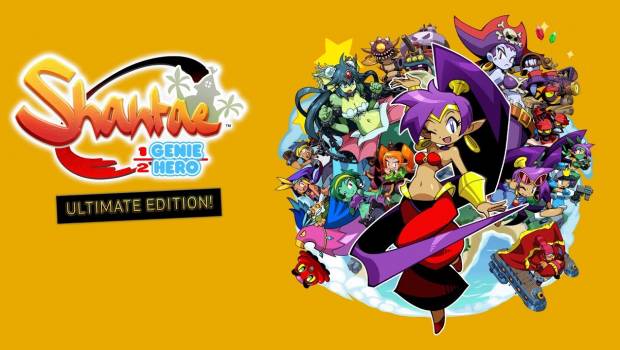 Summary: If you’ve sat on the Shantae series up until now, then this is the perfect game to jump into the series with; it’s easily the most accessible and is more likely to attract newcomers with its new cel-shaded art direction and more forgiving difficulty level.

I Whip my Hair Back and Forth...

The Shantae series has always flown under the radar a little bit despite the overall solid quality of the franchise as a whole.

Initially released for handheld systems, Shantae and her motley crew of friends and foes have made the leap to our television screens before with ports of both Risky’s Revenge and The Pirate’s Curse, but the bellydancing babe’s latest adventure, Half-Genie Hero, is the first title to be built from the ground up specifically for home consoles and computers. 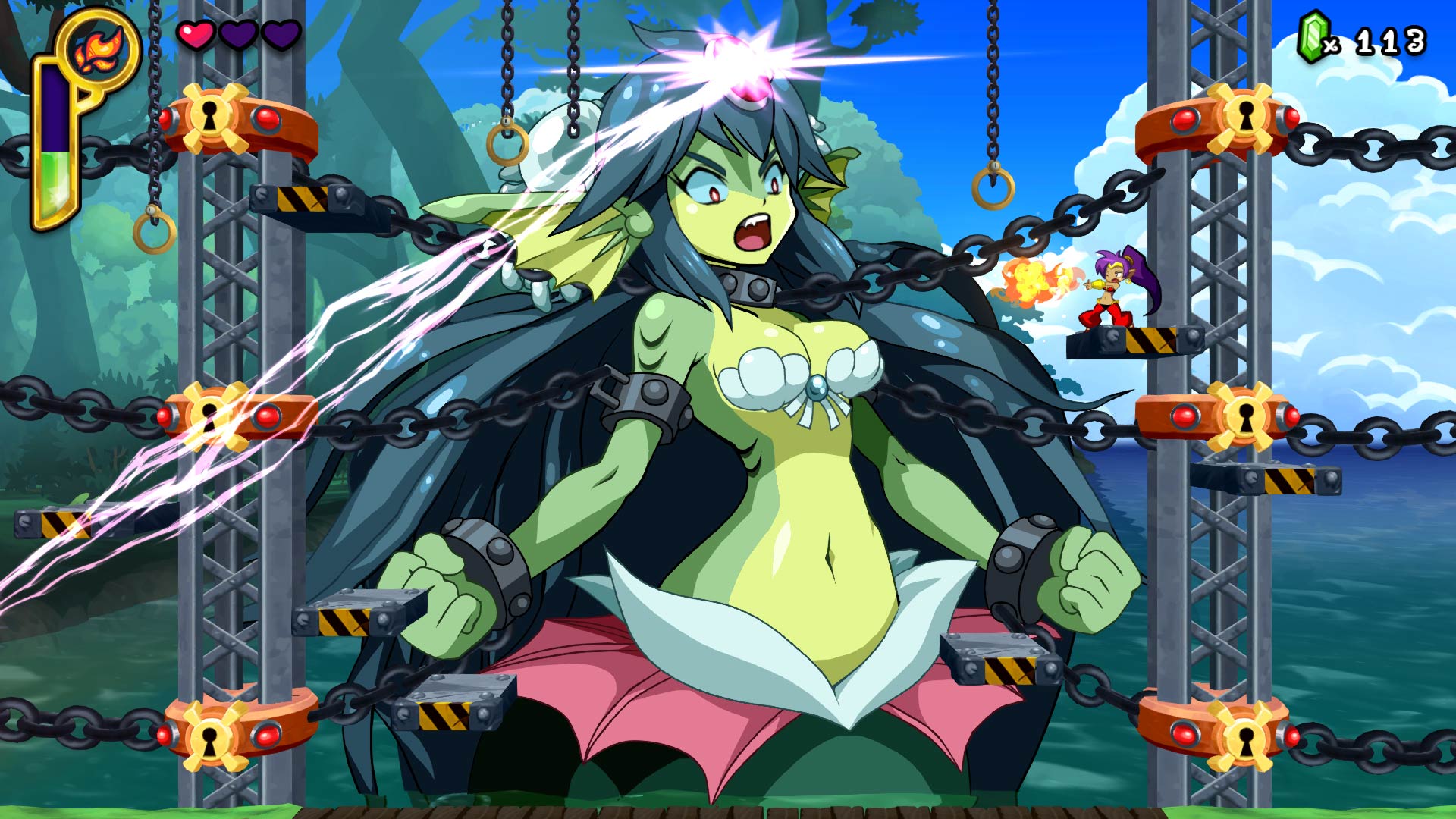 Developer Wayforward tapped the ardent fanbase via Kickstarter to fund Half-Genie Hero and, as a result, there were a myriad of backer bonuses for different tiers, which translates into a wealth of content including previously kickstarter backer exclusives being finally available in this, the aptly named Ultimate Edition.

In terms of story, Half-Genie Hero takes a more episodic approach to things rather than having a major arc persist throughout the game. While this does allow for fan favourite cameos in each chapter, it does also have the unfortunate effect of making the game feel a lot more disjointed than previous entries. 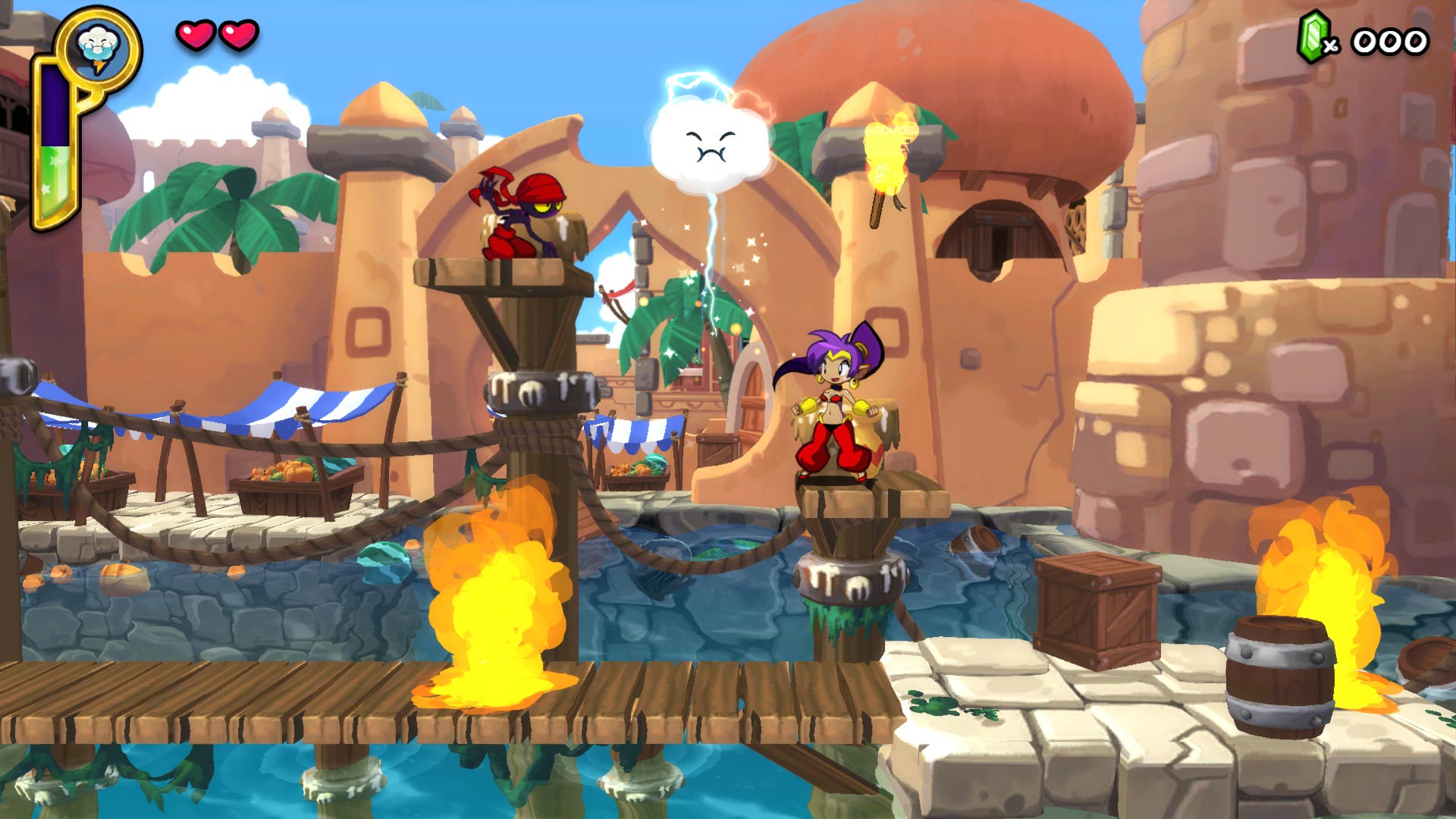 The basic premise sees Shantae, replete with her transformation dances back in her possession, taking on classic enemies like Risky Boots, Ammo Baron, Squid Baron and more in small, self-contained chapters; there is one connective thread between all of the episodic vignettes, which is helping your Uncle Mimic build a machine, but players can choose to skip straight to the final confrontation without completing the task if they so desire.

The self-referential humour is as evident as always, especially with the fourth-wall breaking Squid Baron, and the characters all retain their quirky idiosyncrasies, which really come to the fore with the DLC expansions focusing on Shantae’s supporting cast; “Pirate Queen’s Quest” follows Risky’s actions during the final chapter of the base game, while “Friends to the End” lets you play as Bolo, Rottytops and Sky during the same timeframe. 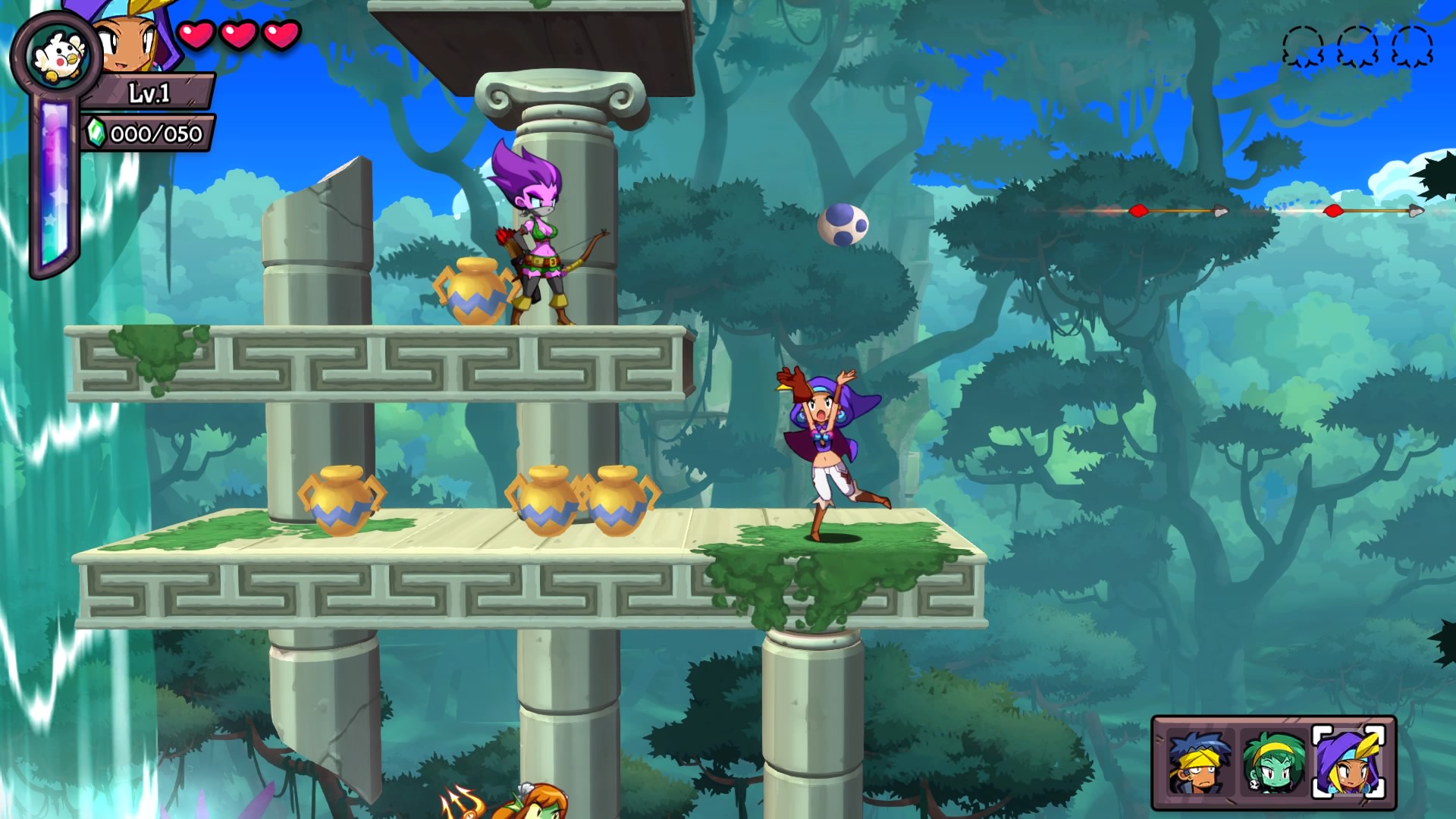 Each DLC adds its own spin on Shantae’s transformation dances, with Risky using similar devices that Shantae had to resort to when she lost her Genie powers in the previous game and her trio of friends using their unique abilities instead of any form of magic.

There’s also the Costume Pack DLC included in this edition, which sees our silken locked heroine adorning different outfits and taking part in a small, non-canon campaign built around her altered appearance. 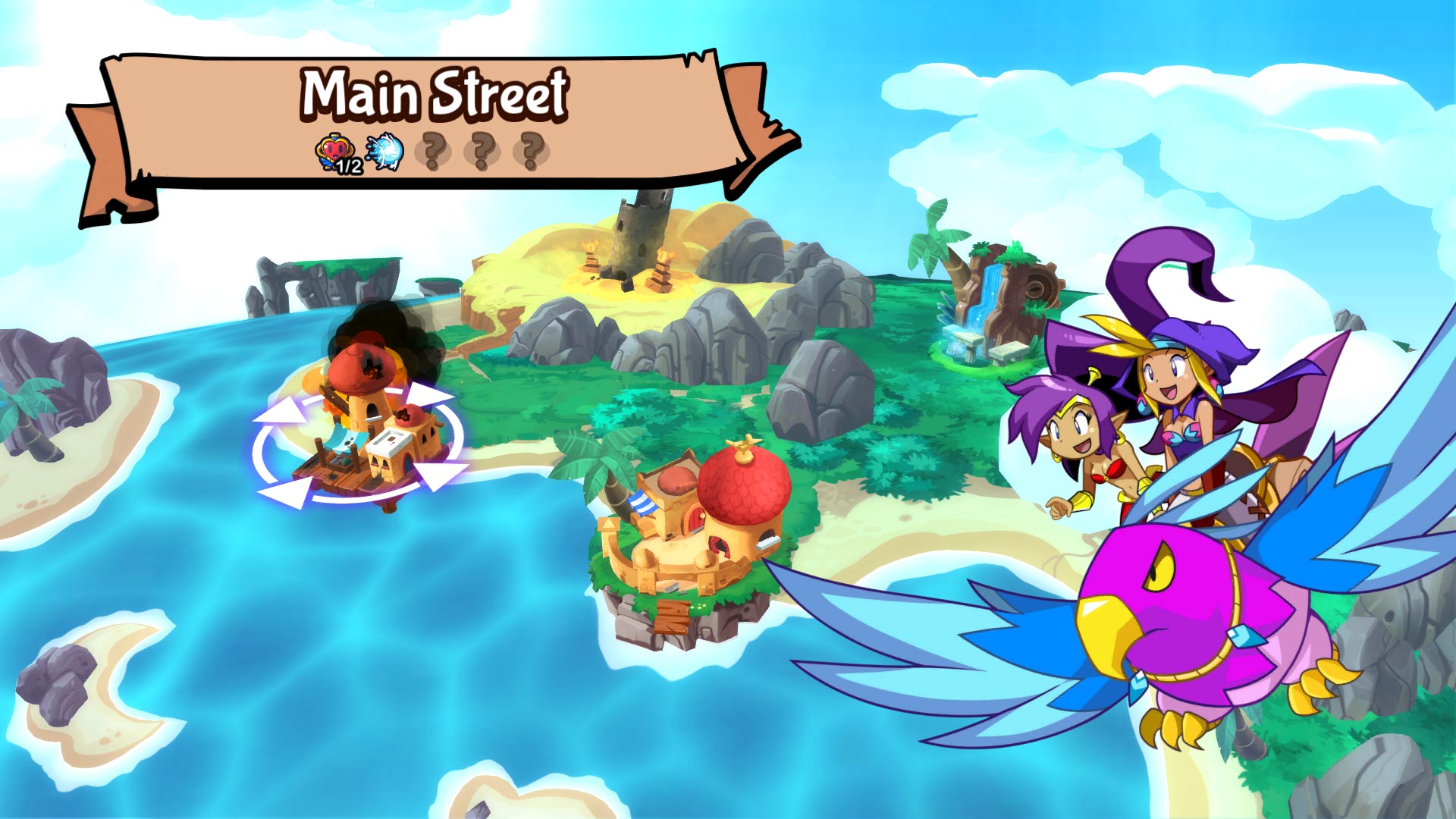 Each DLC adds a decent amount of content to the base game, which admittedly felt a little on the short side when initially released.

The gameplay is essentially the same as in the earlier games, with Shantae exploring areas, doing her best Willow Smith impression by whipping foes with her hair and collecting items and dances in order to gain access to new and previously inaccessible areas. One thing that is immediately noticeable with Half-Genie Hero is the dialling back of the Metroidvania influences; while still present, there is nowhere near as much backtracking as in previous entries. 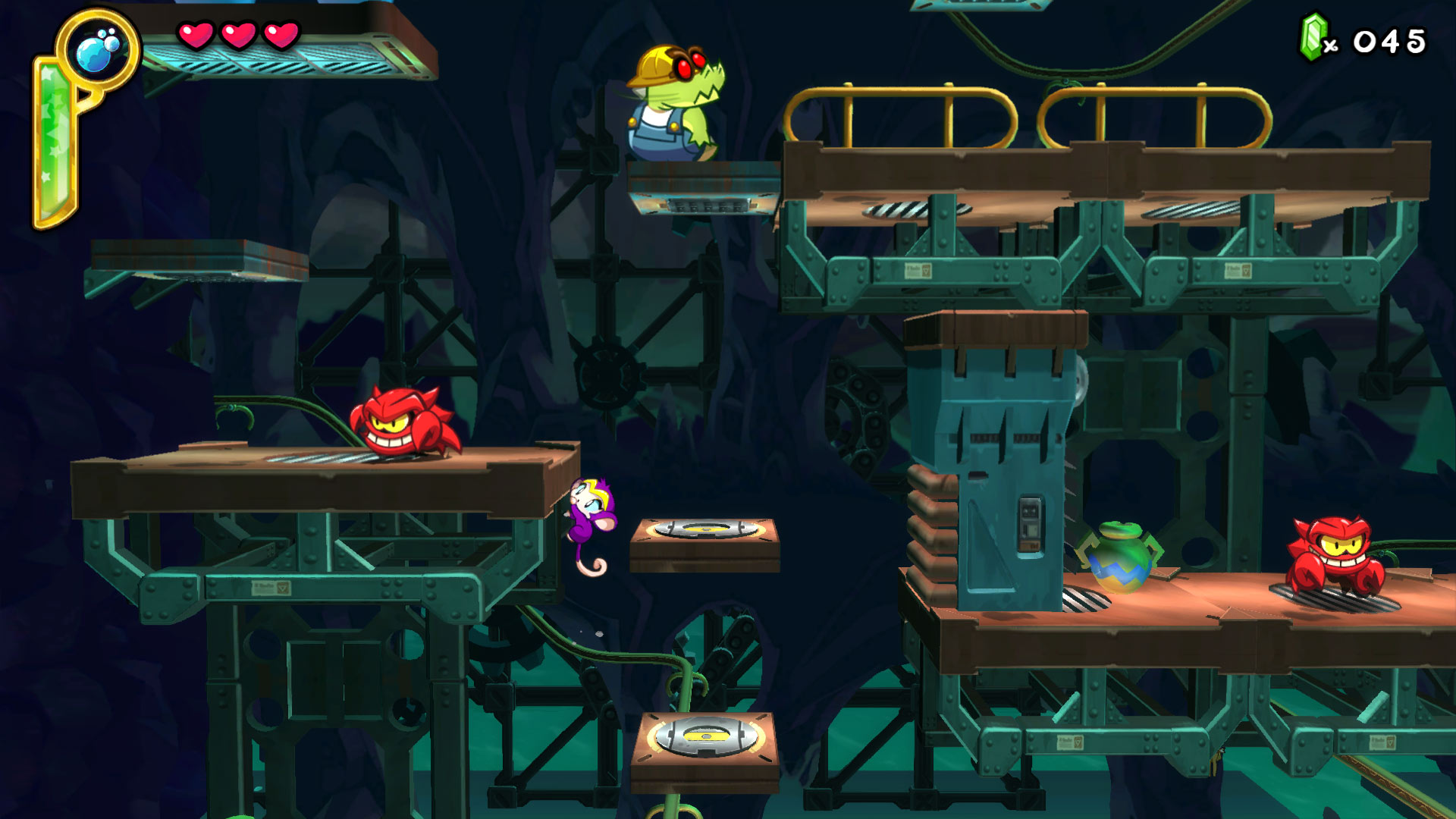 The stages themselves feel smaller and more self-contained here, with none of that annoying screen-depth switching and no interconnected areas that feed into one another; you select each stage and travel there via Sky’s bird, removing the often tedious task of trekking back to Scuttle Town through previously visited areas.

Progression can be a little obtuse, with no real indication of where to go next unless you visit the game’s hint master. Even then, sometimes you may find yourself at a loss as to where or how to obtain the next item on your checklist; you’ll eventually figure it out but it seems that finding your direction can often be tougher than it really should be. 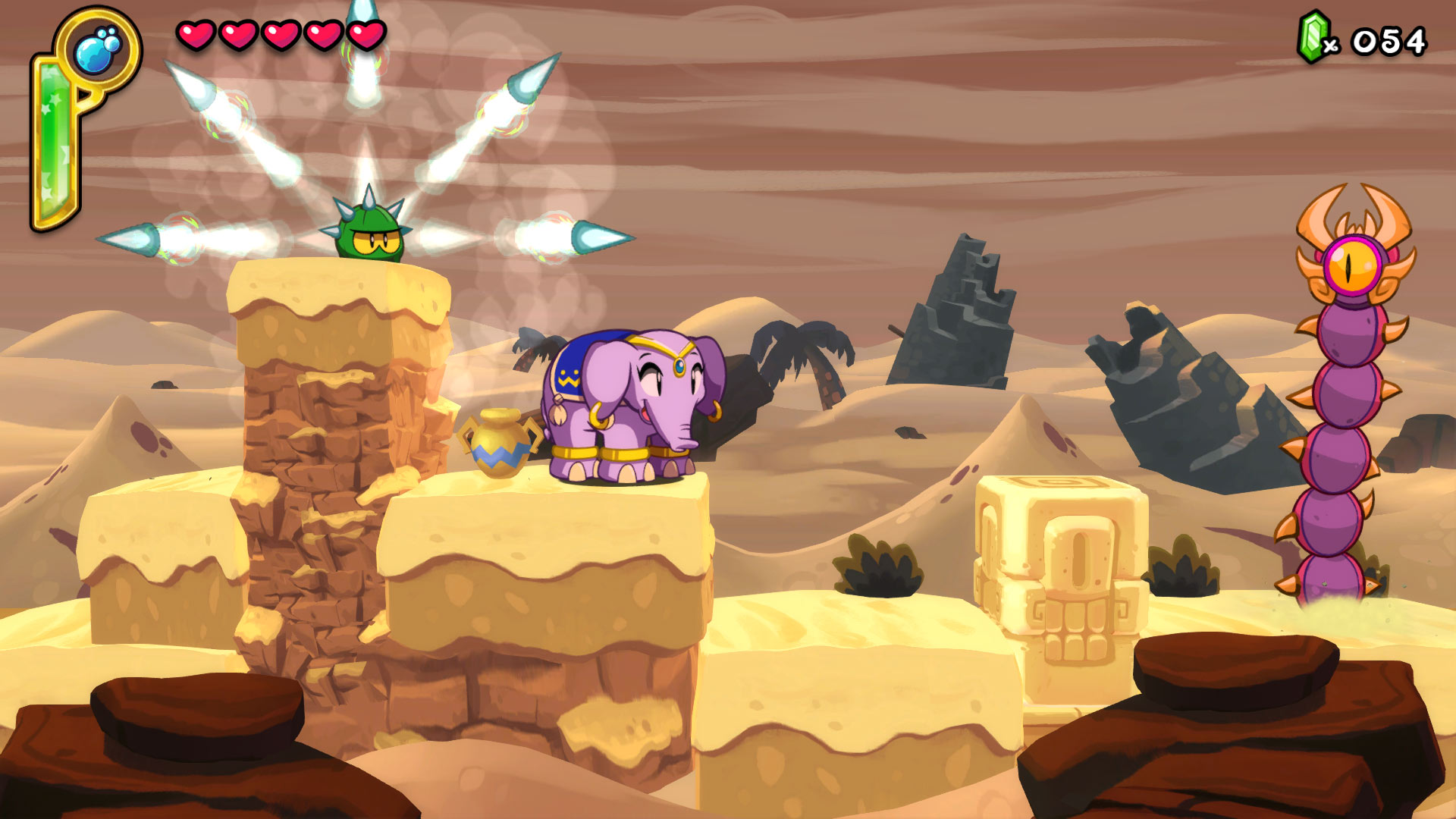 Shantae’s controls are tightly refined and the host of transformation dances, both old and new, are fun to experiment with, even if some of them seem kind of superfluous or feel that they could have easily had their abilities rolled into a similar transformation; for example, both the crab and mermaid allow you to explore underwater, but the crab is burdened with being limited to scuttle along the sea floor.

I did encounter one major bug throughout my time with the game, unfortunately – Trophies for the PS4 version seem to be glitched, only popping when I defeated the bosses despite performing many other tasks that should grant them. This issue persists even now and, as someone who has been inadvertently sucked down the rabbit hole of trophy collecting, it impacted upon my enjoyment when, despite doing what the game demanded, I was frequently denied that sweet, sweet sense of affirmation that I’d completed a task. 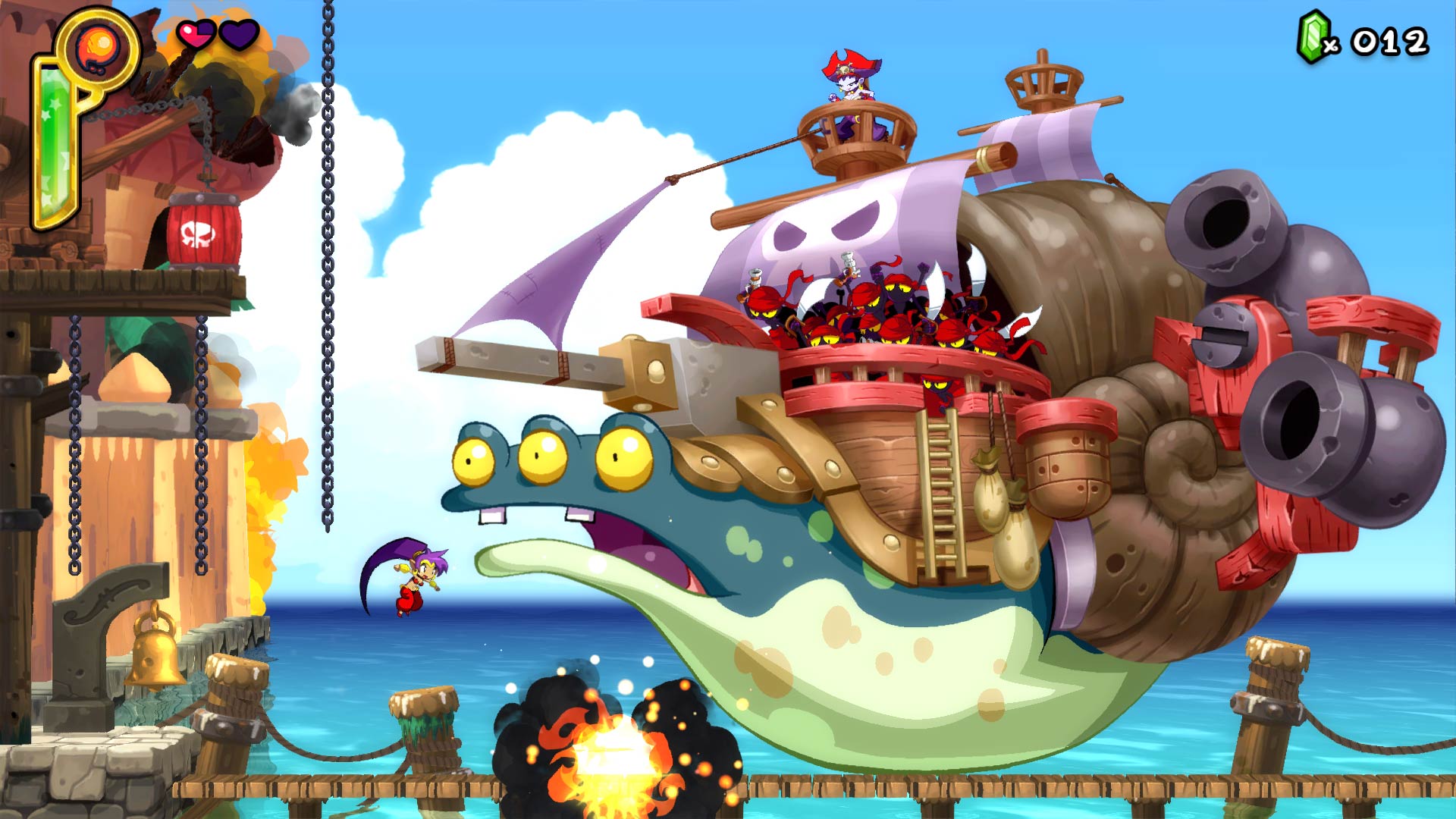 When I first saw screens of Half-Genie Hero I was excited by the prospect of finally playing a Shantae title with crisp and clean cel-shaded graphics rather than the pixel art of previous entries. However, upon playing the game I couldn’t shake the feeling that the game now suffers from a lack of visual identity and flair due to this decision.

It can’t be denied that the character animations are more varied and aesthetically appealing here, but the charm that came with the 16-bit like graphics is sadly absent here. I still appreciate the art design, even if the sexualisation of the main character, particularly with the DLC costumes, is a little on the nose, but personally feel that the older visual style lent itself to the series much more than this flashier take on the graphics.

Thankfully, the soundtrack is just as good as in previous entries, with the sublime chiptune work of musical wunderkind Jake Kaufman ranking up there with some of his very best (Shovel Knight still remains the pinnacle for me). The voice acting, while minimal, is as exaggerated as expected but it is nice to have certain lines actually be vocalised in order to further round out the personality of the characters. 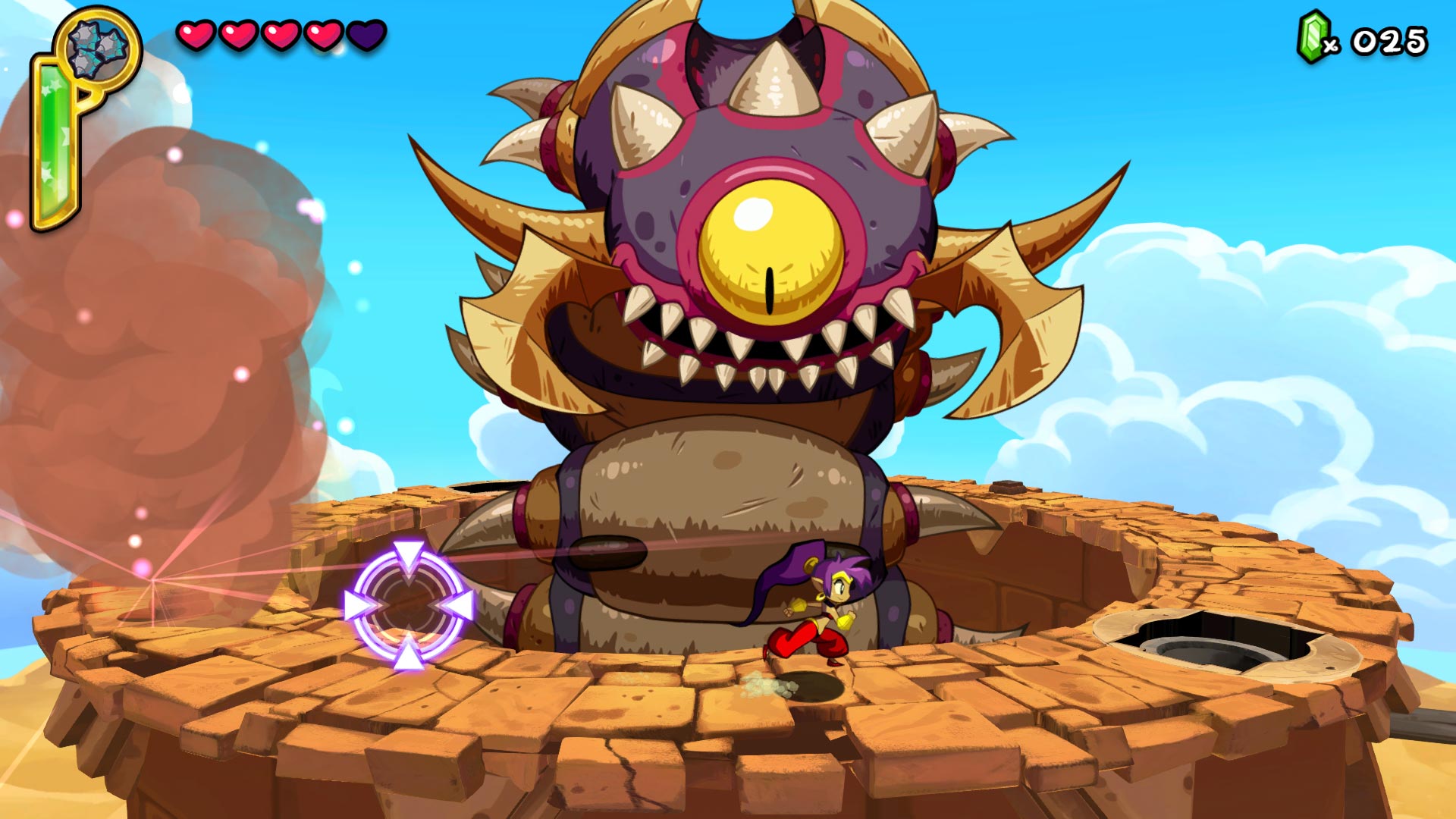 With a bevy of bonuses, including content that was previously only available to Kickstarter backers, this truly is the definitive edition of Shantae: Half-Genie Hero.

Although the somewhat stripped back nature of the main game may grate on some longtime fans, the extra content added by the DLC expansions both expand upon the game as well as exploring the dynamics between the characters and their different approaches to overcoming obstacles; it would have been nice to have some new areas included with the DLC but, like with Shovel Knight’s additional campaigns, the change in gameplay mechanics adds a welcome new twist when traversing previously explored areas. 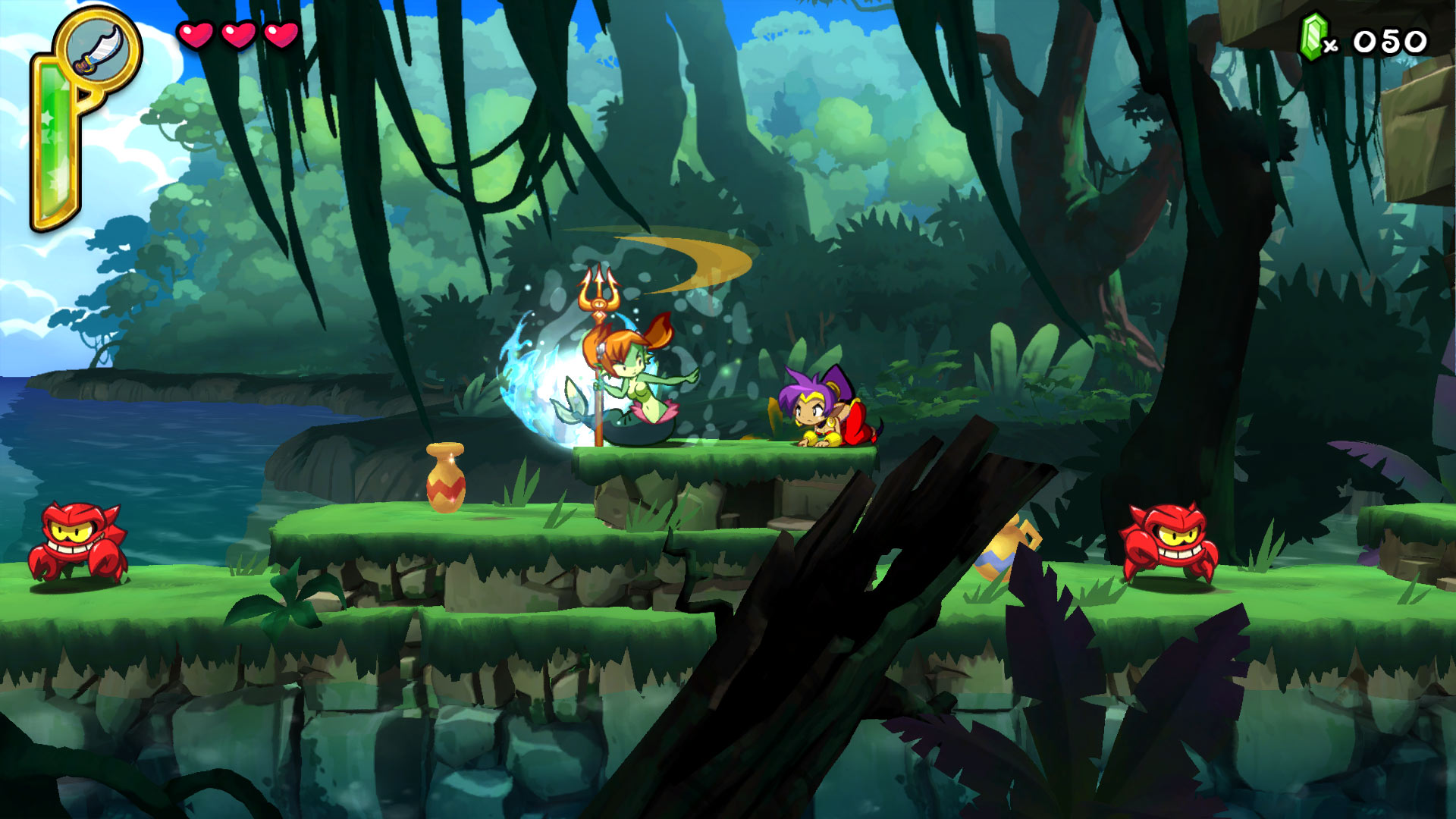 If you’ve sat on the Shantae series up until now, then this is the perfect game to jump into the series with; it’s easily the most accessible and, despite my personal gripes with the change in visual style, is probably more likely to attract newcomers with its new cel-shaded art direction and more forgiving difficulty level.

Recommended for fans of old-school 2D platforming, although with the caveat that the few extras included here probably isn’t worth the double dip if you already own the vanilla game and all of its DLC.

For everyone else though, get Ret-2-Go and seek out a copy of this underrated Kickstarter success story. 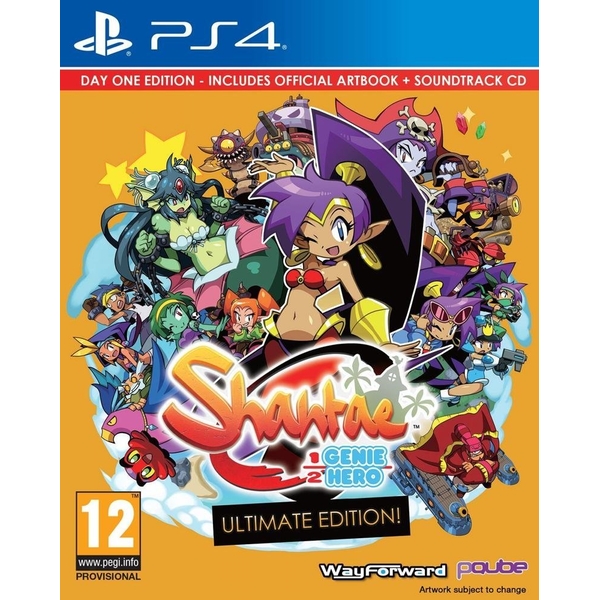