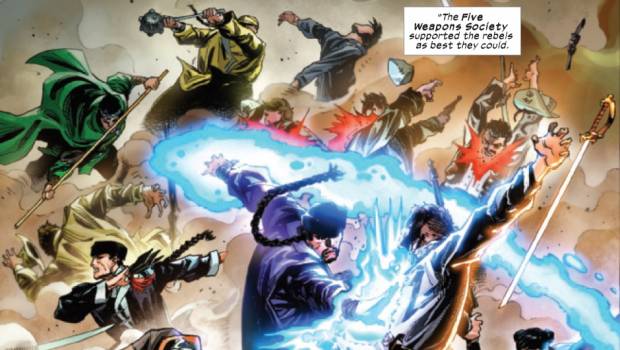 Summary: One for fans of kung fu and Chinese hopping vampire movies which were a lot bigger back in the 1980s.

The name of this intrigued me and I do like hopping vampires but was a bit afraid it would be a Mandarin in Iron Man 3 type situation. I should not have worried as it is written by Gene Yang who also worked on Superman Smashes the Klan amongst other titles.

There are a lot of Chinese comics but very few of them have been translated so it is this or nothing unfortunately.

I did like how they took actual historical events such as the Boxer Rebellion and the triads and made them into a different story with supernatural roots. There are still hopping vampires in this and the yellow paper with the talisman on it that stops them but they seem to have more movement than usual.

While this story did start a bit into the main story I was still able to pick up what was going on and there were some great character designs and the action shown came up well.

I would recommend this one if you are a fan of kung fu and action stories and want to see something with Chinese hopping vampires and fights amongst clans.