Summary: A fast-paced Doom-lite that doesn't overstay its welcome.

If the Shadow Warrior series has taught us anything, it’s that a successful FPS doesn’t need bells and whistles to be a blast. The franchise may not have achieved the grandeur of fellow arena-blasters Doom and Duke Nukem, but there’s something so decidedly charming about the absurd and wholly gruesome world in which Shadow Warrior resides that it’s impossible to dismiss. Light on features, big on functionality and fun, even when Shadow Warrior 3 does stutter, it moves so quickly that its occasional misdemeanours are quickly – and easily – forgotten. Shadow Warrior 3 continues the franchise’s tried and tested formula of keeping its story beats light, letting the FPS shine elsewhere. This time, the merc with the mouth (not that one) Lo Wang finds himself taking on a giant dragon, as well as an endless stream of killer demons, to once again save Shadow Warrior’s unique version of Neo-dripped feudal Japan. It doesn’t waste time telling an intricate story but instead weaves its tale through short cutscenes and quick whips between the game’s protagonists, which, honestly, suites Shadow Warrior 3’s pacing just fine. After all, you’re here to save a hyper-stylised fantasy Japan from certain doom, and that’s really what the game does best. 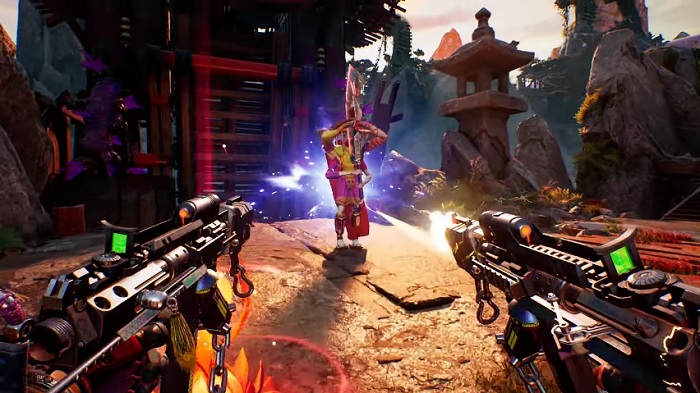 And speaking of Doom, Shadow Warrior 3 has more than a whiff of the classic FPS franchise about it, but that’s not necessarily a bad thing. Taking on waves of mindless monsters in arena-style combat is an instant power trip, and, just like playing as Doomguy, slicing and dicing as Wang makes for a gratifying experience. While there are only seven weapons to use throughout the adventure, each makes the player feel enormously powerful against overwhelming odds. Even the standard six-shooter that Wang begins with packs a pleasurable punch, sure to send a demon’s head scattering from its shoulders. Latter weapons include an impressively powerful grenade launcher and a gnarly rail gun, and of course, always at Wang’s side is the warrior’s katana, an amuse-bouche complimenting Wang’s satisfying meal of an arsenal.

Weapons and Wang’s character stats can be upgraded three times each, making you an even more fearsome opponent to the hordes of demons vying for your head. These upgrades feel anything but trivial, especially when compared to other FPS’, which all too often focus on small buffs that aren’t immediately beneficial. The railgun, for example, can be fitted with a time-slowing zoom function, while Wang’s enemy-stopping Chi Blast can become a vital piece of your toolkit when upgraded to unlock more functionality. It’s not much, but it’s enough, and in a solo adventure with not much outside of its main campaign to focus on, the option to upgrade at your leisure gives the game a little more body. 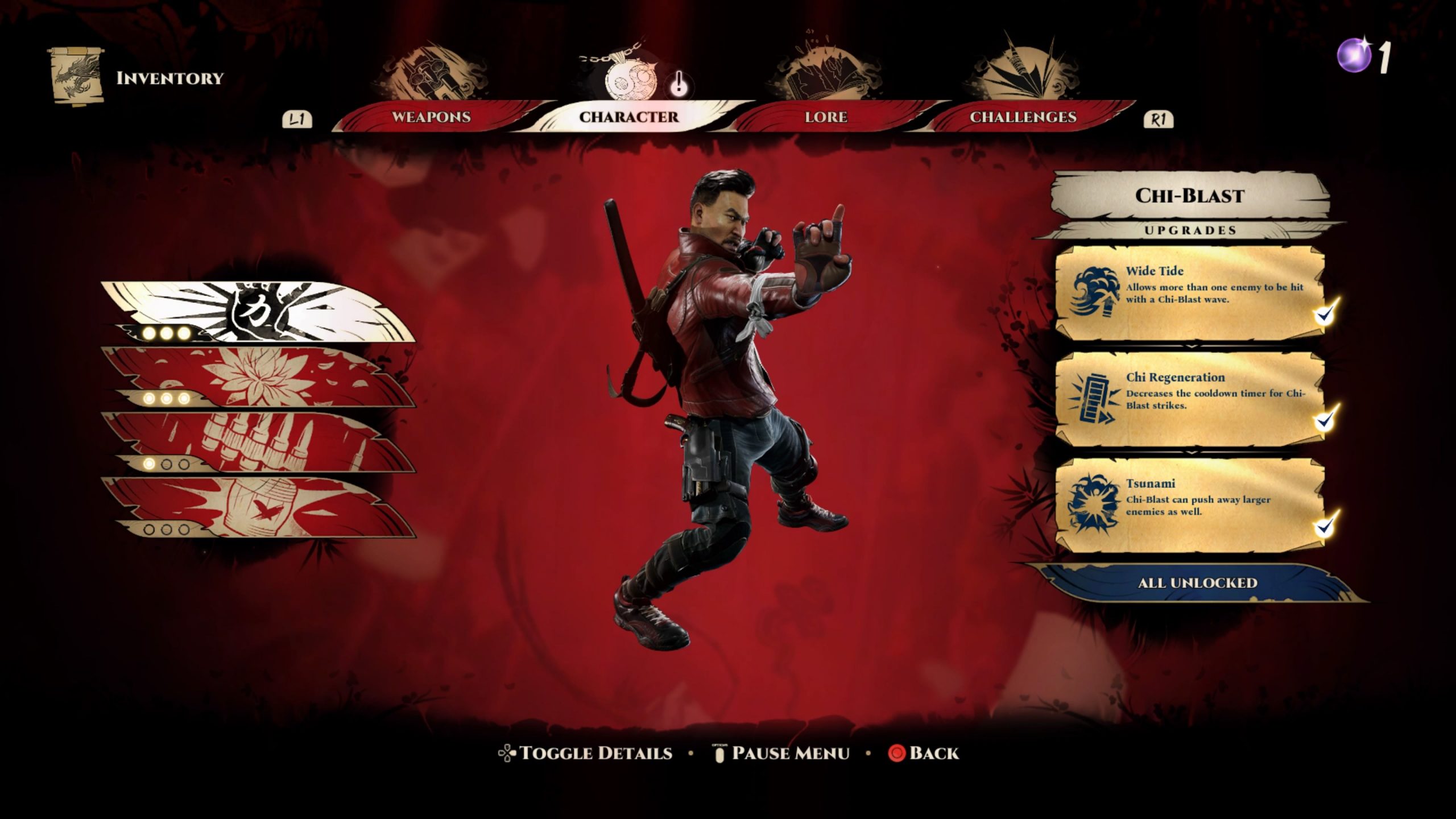 Packing a strong arsenal is vital in the Shadow Warriorverse, with the franchise’s third outing introducing some of the best and most obscene selections of demons yet. Power up enough, you can lay an almost exclusively one-shot killing move onto most enemies, tearing bits off them to use as temporary weapons against the demon horde. It’s both visceral and hilarious fun, and shooting gross monsters to pieces and watching their limp bodies ragdoll around the map is some of the best – and goriest – fun with an FPS I’ve had in ages.

But while Wang packs plenty of punch in the gun department, Shadow Warrior 3 doesn’t allow players to rely heavily on their favourite weapon. Guns lack piles of ammo, meaning players have to switch up their weapon choices often, which, in turn, forces the player to draw their sword when times get tough. It might sound like a restriction on the player’s choice, but it’s a system that works well to keep Shadow Warrior 3 feeling fresh, and with ammo dropping often you’re never too far from topping up your prize gun.

Shadow Warrior 3 is, overall, a sharp and fluid affair, with shooting mechanics feeling vibrant and lively despite fundaments built on the ageing borrowed Doom system. But, while it moves nonstop to deliver its gory brand of fun, which it does to a satisfying standard, it’s a game not without a slew of issues. Frame rate is perhaps the biggest problem, Shadow Warrior 3 occasionally dragging the game down to a painful slog, and while bugs are less of an issue, I still encountered several stuck enemies and janky graphic anomalies. It’s also not the prettiest game on the market, despite fantastic enemy designs, with some areas feeling tired and washed out. 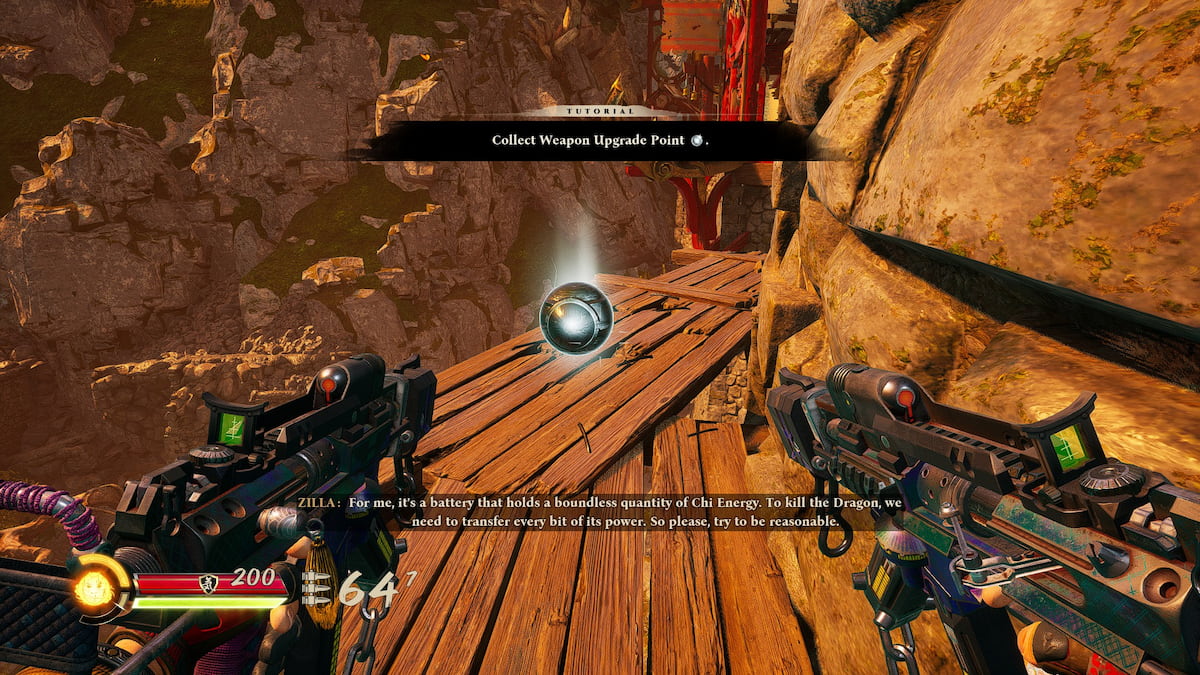 But if you’re put off by Shadow Warrior 3’s inconsistencies, for better or worse, the game only clock’s in at a measly six or so hours, so there’s not much time to develop any major frustrations. It’s short, and with the pace Wang slices down foes, it can feel like it’s over before it gets a chance to begin. There are however a few hidden secrets and collectables if you’re up for a completionist run, but there’s no level selector, so if you miss anything, you’re forced to start from the top to hunt them down. That being said, half of the fun with Shadow Warrior 3 is its pick up and play aspects, so it doesn’t feel like a chore to re-tread ground.

If  you’re spoilt by modern-day graphics and the feature-full world of 21st-century gaming, Shadow Warrior 3 probably isn’t for you. It’s a simple game, not afraid to rely solely on its strong shooting mechanics, but it’s one that any FPS fan should add to their collection if they want to switch off and tear up some bad guys. Short, silly and gory, Shadow Warrior 3 is a fine example of great gaming dialled back.