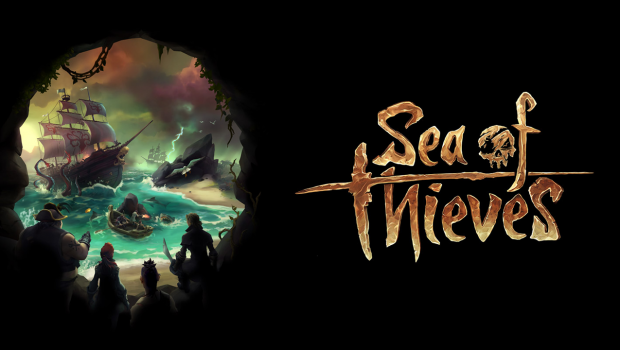 Let me give you a brief rundown of my first hour with the recent Sea of Thieves Closed Beta: 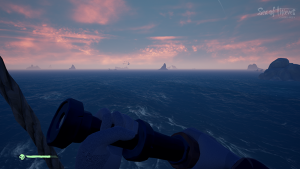 I was matched up with three other random players and dropped onto a brightly coloured, but rather sparse, tiny island surrounded by ocean. Directly in our line of sight was a gigantic pirate ship bobbing along gloriously with the calm blue waves off the coast of the island, with the midday sun shining down on it from above. My fellow players made a B-line straight into the ocean towards the ship and on their arrival began preparing to set sail: one started by hoisting the anchor, another unfurled the sails and another player was below deck examining a sea chart, trying to find the island mentioned in a riddle that we had all been given that would lead us to riches.

Meanwhile, I was below deck stockpiling cannonballs and bananas for no particular reason other than I wanted to look busy so that my crew mates wouldn’t throw me in the brig for having no idea how to play the game. 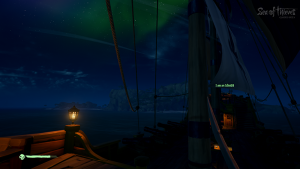 Suddenly a voice came through the comms channel, “Alrite guys I think we should head northwest to Smuggler’s Bay first, because the wind is coming from the southeast. Then we can keep heading west to Sharktooth Cove and then Rapier’s Cay after that, sound good?” Everyone, including myself, agreed that the plan sounded good.

The ship started to course through the crashing waves as we headed northwest. One of the players climbed the mast up to the crow’s nest and directed another player that was steering at the back of the ship. The third player and I drank grog from our tankards and played the Titanic theme on our accordions (poorly, as the potent grog took effect quickly). 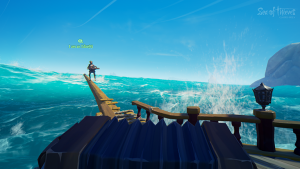 We eventually arrived at Smuggler’s Bay, an island substantially larger than the one we had spawned on. The anchor was dropped, the sails were furled and everyone proceeded to shoot themselves out of the ships cannons, onto the island. The riddle beckoned us to dig in a spot 8 paces south of a ‘grave adorned in rope’, located in the southeast of the island. Five minutes later we were back aboard the ship with a hefty treasure chest and a few scratches from fighting the haunted skeletons that chased us as we ran off with the loot. 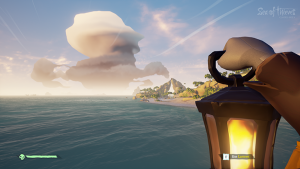 Without hesitation the crew went back to their original tasks of setting the ship in motion, this time I knew to help pull up the anchor and angle the sails to catch the wind, and in less than a minute we were heading west to Sharktooth Cove. The ship cruised along effortlessly, and after some chiding we were able to convince the helmsman and spotter to join us below deck to drink grog and play music together. I was actually laughing out loud as these random people I’d been paired with took turns singing pirate shanties into their microphones. 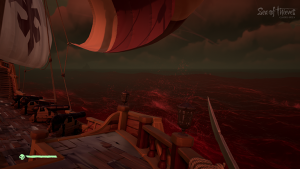 The next thing I knew, another ship T-boned us and shot their cannons into the front of our hull. I physically jumped out of my chair in fright and a barrage of angry expletives from my crew mates came through the voice chat. We all ran up on deck to a hail of gunfire from four enemy players that had jumped on board. All eight of us proceeded to comically jump around the deck, taking turns firing and reloading our single shot pistols at the opposing players. Miraculously, two of the enemies were killed and the remaining two jumped overboard into the ocean while all of our crew members survived. The enemy’s ship had careened off into the distance, and sharks (attracted by ringing the bell outside the captains room) swiftly finished our fleeing attackers.

Everyone raced below deck to gather planks of wood and attempted to plug up the holes in the hull, but it was too late. The screen flashed white and suddenly we were floating in the ocean as we watched our glorious ship sink slowly beneath the waves, along with our treasure chest full of booty. We sulkily swam over to a mermaid who took us to a nearby island. 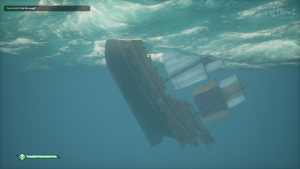 “What do we do now?” I asked when we loaded onto the island. “We just do it all over again”, one of my crewmates replied as we all swam out to another ship, bobbing along gloriously with the waves as it lay anchored off the coast, waiting for us. 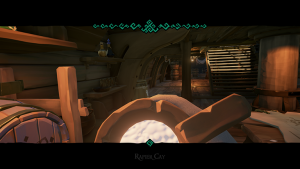 Suffice to say, my time with the Sea of Thieves beta was one of the more unique experiences I’ve had in gaming. The game provided a framework of fascinating mechanics that allowed a bunch of random players to connect and have a silly, fun time. But after a few more hours of play time, the boundaries of the framework began to appear and I’m now left with questions as to the breadth of content that will be available in the full release.

Mixed reports are floating around as to exactly how much of the game was shown in the beta, with Rare and Microsoft being unsurprisingly coy with details of the full release. Yet what was shown was indeed promising. I really enjoyed the sailing mechanics and the adventuring, and I can see this being great fun with a friend or three. To ensure the longevity of the full game, I’d be hoping to see extensive customisation and equipment upgrades available, plus some more long form quests, as well as a greater variety of islands, enemies and random events to encounter. 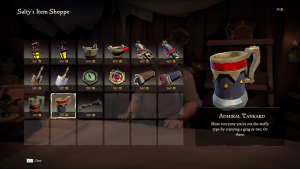 I’m very excited to play the final release and even if my hopes for the full game outlined above aren’t realised, I could see this being a fun little experience that my friends and I might quickly play between rounds of PUBG. Plus with the announcement of Sea of Thieves being added to the newly revamped Xbox Game Pass, the cost of entry seems more than reasonable. Check back with us in March when we will have coverage of the final release, ye scurvy scallywag.