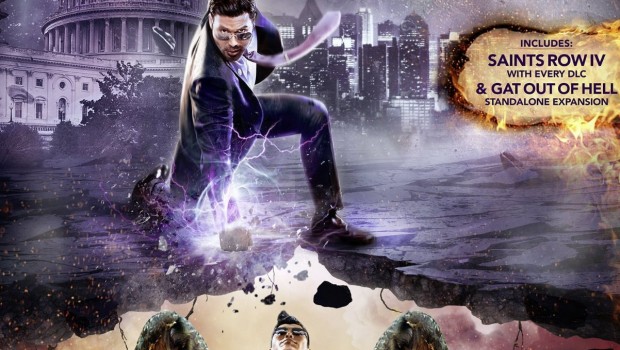 Summary: High Value as a package Deal. The Saints are back and kicking some Demon Tail in the DLC Stand Alone Add on.

Volition jumps on board the repackage train by rereleasing Saints Row IV: Re-Elected with its standalone add-on Gat out of Hell. Though if you have not tried out Saints Row IV, then this package is for you because not only does it have Saints Row IV but as mentioned, it also has the add-on Gat Out of Hell plus it has both DLC mission packs for Saints Row IV and its 25+ DLC weapons, 15 new vehicles, 60+ wardrobe items, 15 new homies to call upon and 6 new superpower elements. So this package is pretty big bang for your gaming buck and better yet, you can even download them onto your console or PC instead of having to get a disk copy.

Now in the world of next gen, the Saints Row repackage has way better frame rates but the jump in the graphics is not earth shattering. It looks good, just not eye popping good… in fact, it may just be me but I can’t tell too much in the graphic department being that different. Now this is not a bad thing because Saints Row as a series has always had its look and the look is quite impressive that is definitely a little stylised and unique to this franchise. 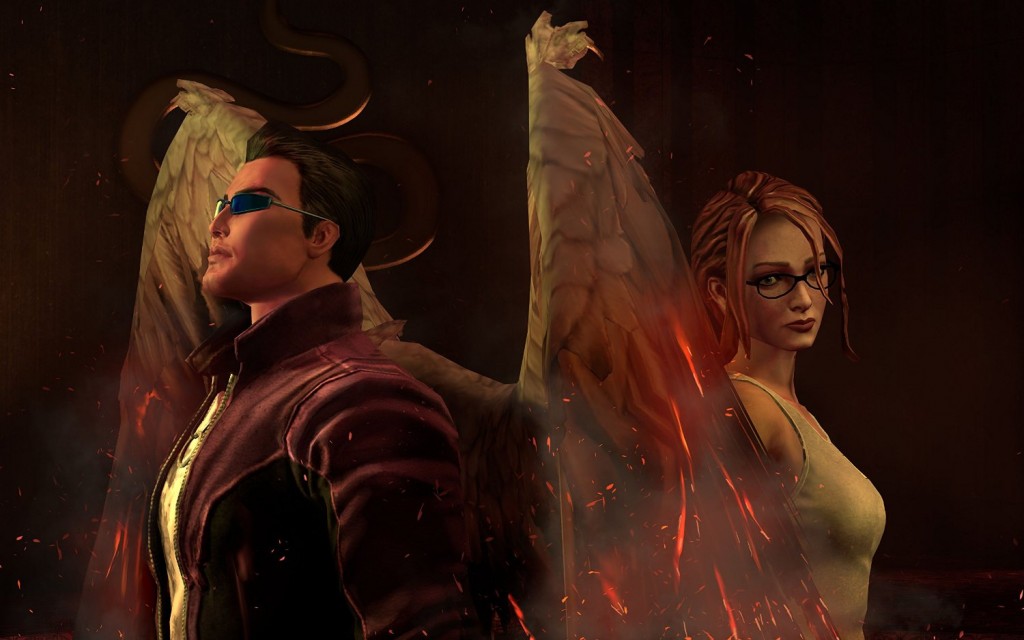 With that said, Saints Row began originally being somewhat on the more serious side, they then leaned the franchise towards the fanciful silly over the top stories and action which really paid off.  In Saints Row IV: Re-Elected, our hero of the 3rd street Saints has saved the world from a terrorist attack and is elected as President of the United States.

Everything is going great of course, until an all-out Alien invasion led by warlord known as Zinyak. The aliens attacks the Whitehouse and captures the entire Presidential cabinet. This core part of the game is retooled and is the same as the last release but with a lot more perks.

Our heroes are then placed in a simulation that bends reality. Trapped in this simulation they must learn to use the simulation against their captors and take on the Alien menace. Other than being up-scaled to HD resolutions, there is not anything new for Saints Row IV and options to make use of the PS4’s touchpad.

However gamers that had the previous game and most, if not all of the DLC will be hesitant to justifying making this a purchase. But the tipping point is having a version for your next gen console… plus all the DLC and extras and Gat Out of Hell in one package. If you have not even tried the last Saints Row before then this would be an even easier choice for you then. 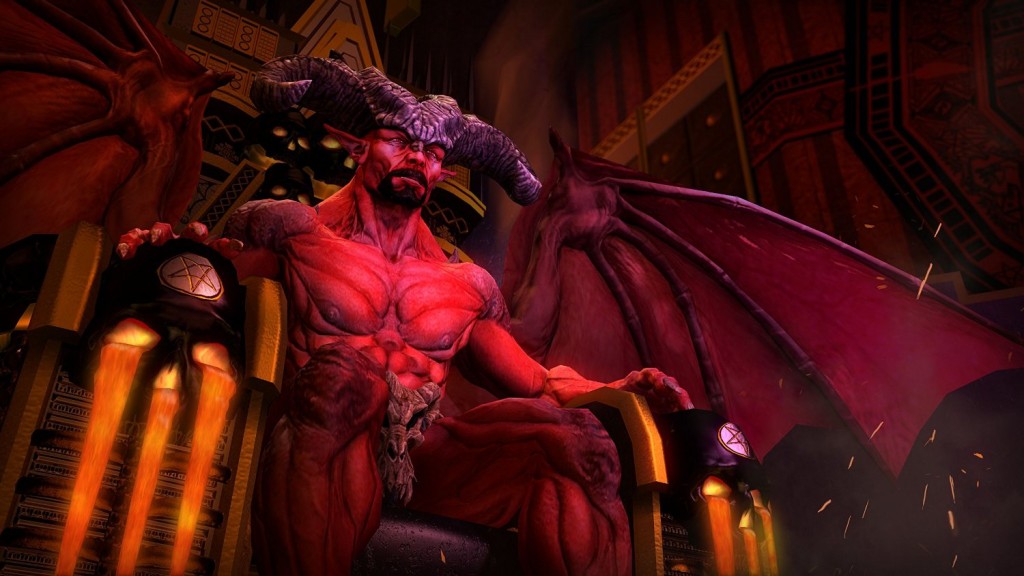 In this latest expansion which you can get as a standalone as well… players take on the role of the legendary Johnny Gat or Kinzie Kensington. As with the theme of over the top crazy situations, this adventure pits the Saints against the big boss of Hell himself. The President is kidnapped and whisked to hell and being forced to marry Satan’s daughter.

It’s a classic Saint’s Row story but the game world seems all too familiar in many ways, and even one of the characters during the cut scene points out that it reminds them of the city of Steelport. But this is without the flowing lava ,weird floating islands, structures, chasms and belching flames from hell. Enemies feel oddly the same, just reskinned from past games but it gets the job done. After all this is a DLC.

Needles to say, it’s a nice add-on, but just seems to fall a little short in regards to the Saints Row franchise we all know and love. Maybe it’s just the presentation or maybe it’s the story told by some cut scenes but it just seems flat and a little direct. It has the humor, just not the same over the top tongue and cheek humor that we are familiar with. Even so, it’s a short romp if you’re a player who does not explore and just tears on through to the main missions… so maybe 3 to 4 hours to complete and a little longer if you take your time. 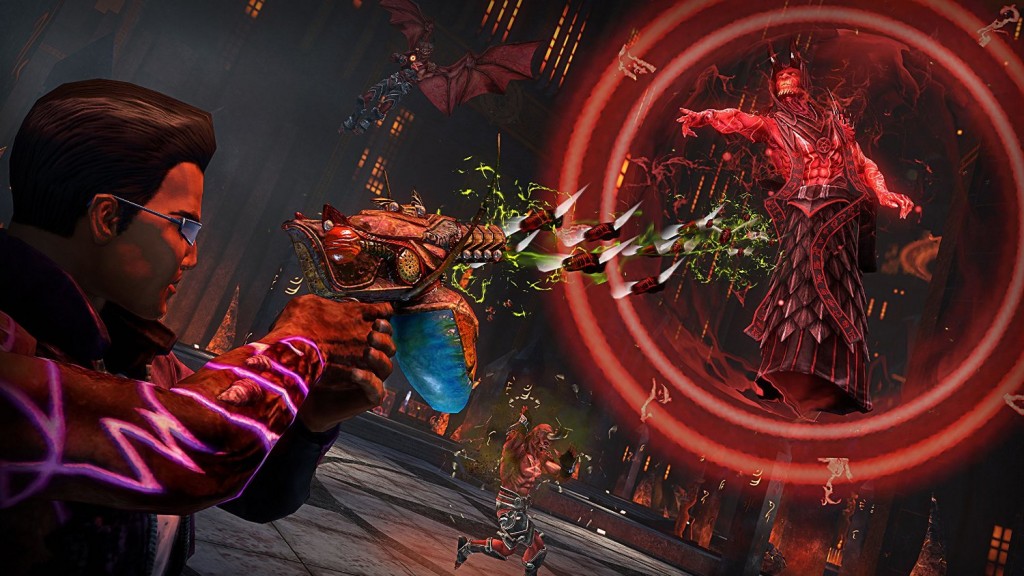 The main gameplay is very familiar to anyone in the series which does have some parallels to the Grand Theft Auto Series. Like previous games and to kick the villains butt (which is Satan), the player has to recruit the assistance of the surprising inhabitants of Hell. Once players have their attention, the player has to go on a few loyalty missions to cinch the deal. Since the missions are just retooled for this game, it does not have the same impact as seeing them for the first time, or second time for that matter. But they do give the player the chance to get upgrades for their hellish powers and put them to use.

As the player gets around the underworld, the real fun takes place when they get the power of flight. Not just any flight but with demonic/angelic wings. It’s so much fun to fly and glide to get around the world of hell. Our hero can also super sprint, much like what took place in the primary game Saints Row IV. 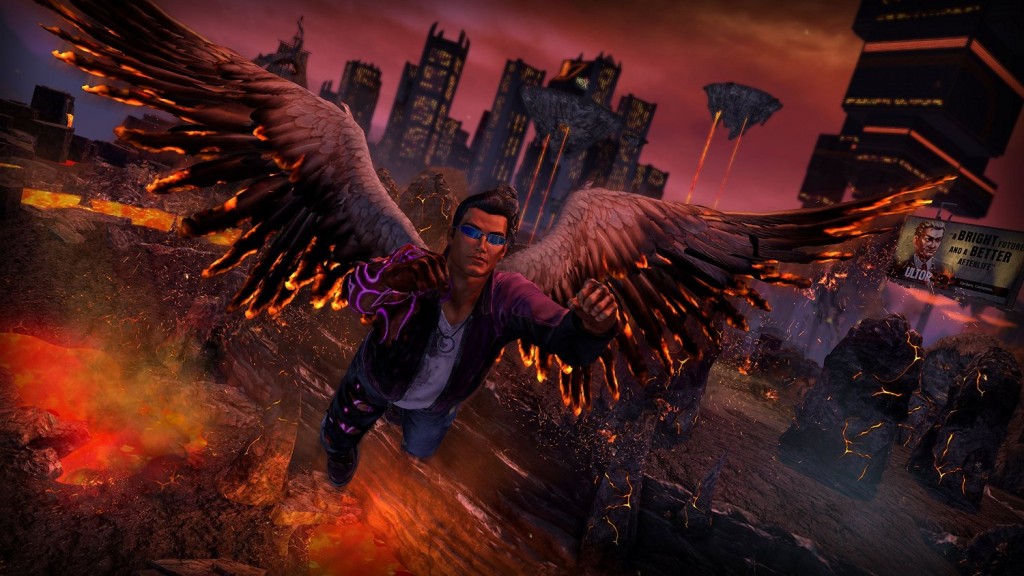 The abilities do not stop there, as things progress our hero can get a super stomp and an energy blast. Now instead of just homies, they can now call little imps or minions to attack their enemies. Some can even rush a target and explode. All of the powers can get upgraded through the abilities tree.  Upgrading and making these abilities stronger certainly assists in laying the beat down on the demons of Hell.

Oh and never fear, players do get to wield weapons of various types that have different effects plus the special weapons amusingly enough are named the Seven Deadly Sins. Now there are some pretty nifty special weapons here and there but most of the weaponry, it does not feel as inspired as past games. Maybe I am just a sick puppy who wants that over the top shock value…who knows? Though sitting in a recliner that is decked out with a weapons delivery system is pretty odd ball enough in a good way. 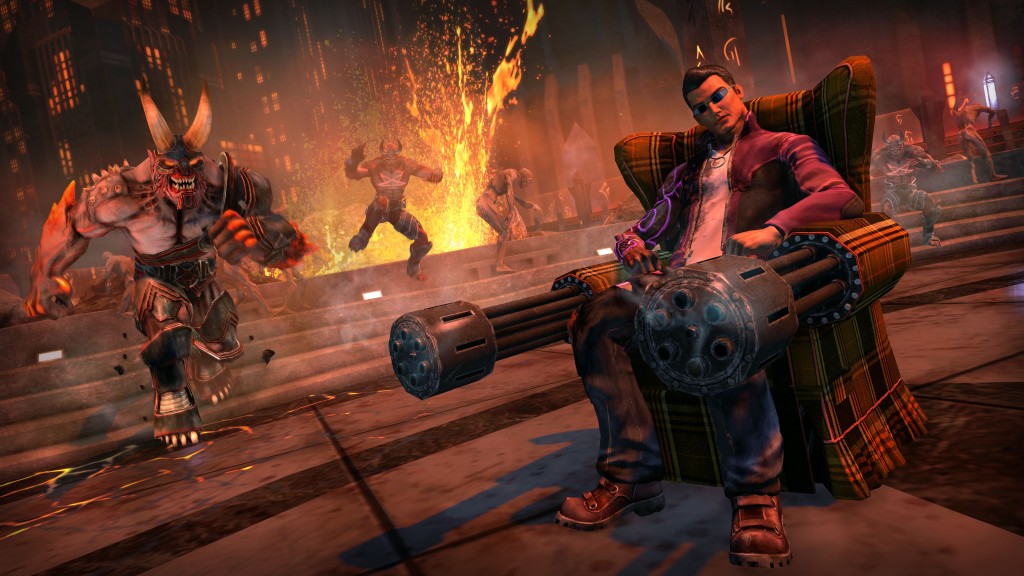 The great thing here is once players finish the game, they can continue to play or come back to some of the missions to try to better their score. The diehard fans will be happy with this, folks just coming into it will be fairly satisfied in what they find here and everyone will appreciate being able to continue if they would like to just to wreak chaos and get bragging rights to a higher score and upping their abilities further. Final say… because of the genius of packaging this all together, it presents an incredible value in a great franchise.

Have fun play games… get this game and shoot Satan in the face!

• An Open World from Hell – Wage war against the Prince of Darkness through-out the 5 unique districts of hell any way you want: rescue allies, pick a fight with nightmarish Arch-Dukes, rob Satan’s soul processing plants… dozens of options await you in an all new city unlike any that’s been seen in Saints Row before.

• New Supernatural Powers –The acclaimed super powers of Saints Row 4 are back with a hellish twist –  Soar through the air on fallen angel’s wings, summon devilish imps to attack your foes, and surround yourself in a divine aura that forces all to worship you.

• Outrageous Weapons – Put the 7 deadly sins to good use with an arsenal of underworld themed arms: fire exploding frogs at enemies, shoot swarms of locusts, and even deal destruction from afterlife’s most comfortable (and lethal) armchair.

• Kill Dex – We promise you can do it this time.  Pinky swear.