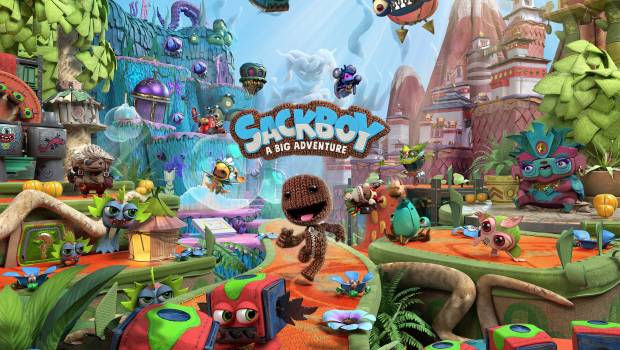 Summary: An inventive and engaging platforming experience that especially shines in co-op multiplayer - enjoyable for all ages.

Sackboy: A Big Adventure is the imaginative and engaging platformer I’ve always wanted LittleBigPlanet to be. It’s not exactly challenging or genre-defining, but it’s accessible, oozing with charm and a joy to jump in and play with friends and family of all skill levels at any pace.

While its trademark sandbox tools and customization always proved irresistible, the campaigns in the main franchise felt like elongated demos for the creation tools. I also can’t recall many story points, but I can recall the sometimes frustrating controls.

The spin-off opts to ditch the 2.5D perspective and user-creation heart of its origin franchise and instead brings its titular mascot into 3D worlds with tighter and more focused platforming fun, while retaining its homemade arts and crafts aesthetic, eclectic soundtrack and innocent charm.

The story of Sackboy is standard-fare scene setting for a globe-trotting adventure, but it’s well-written, humorous and reminiscent of a Saturday morning cartoon special: After an adorable opening cutscene with knitted citizens going about their business, an evil jester doll known as Vex abruptly destroys the peace to kidnap the Sackfolk to create a machine that will harness an energy known as the Uproar and remove all the creativity from Craftworld.

Of course, your Sackperson escapes the chaos and is tasked by an advisor called Scarlet, who inspires you with tales of past heroes called Knitted Knights, to travel across the Imagisphere through five distinct hub worlds filled with creative levels, secrets and collectibles and save the day. An abundance of whimsical dialogue, uplifting tracks and silly facial expressions proved enough to keep me engaged, as I collected Dreamer Orbs to stop Vex and 100% each level.

While the general structure of each level is linear, there’s plenty of colourful enemies and creative obstacles in-between to overcome, well-placed hidden paths that will test your acuteness, and score bubbles to collect to make it to the top of the leaderboards for some healthy competition with your co-op friends; you can even pose for a funny photo at the end to flaunt your victory. There’s also shiny collectabells to hoard, used to purchase new costumes and emotes to customize your Sackboy/Sackgirl and truly make them your own. From monk robes to googly eyes to cute ninja masks, there’s a lot of fun items to use – and every level has rare unlockable costumes to collect to show off for that extra level of bling in story cutscenes. 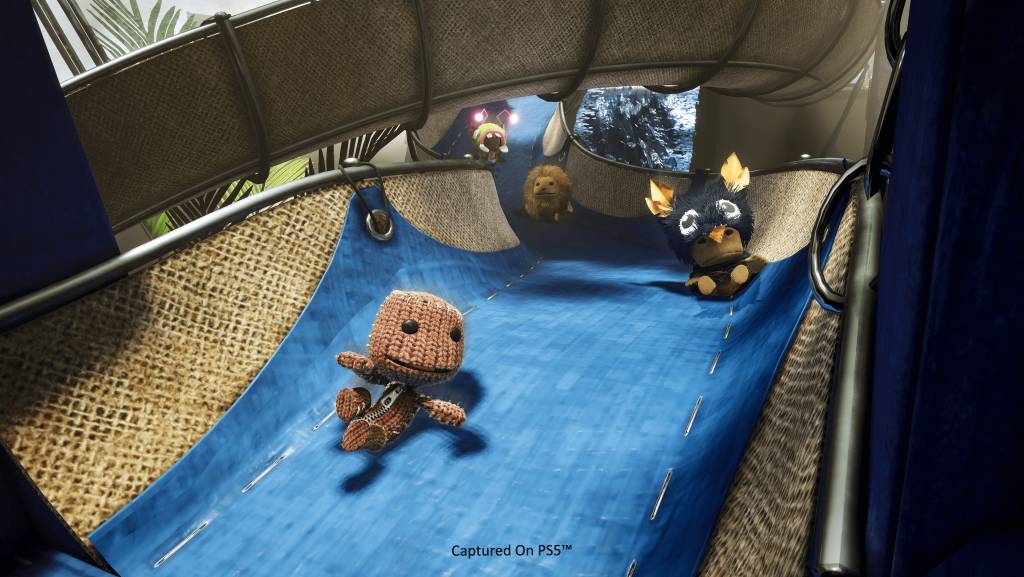 Every player starts each level with five lives, and the general aim is to collect as many score bubbles as possible (as you lose points), with sub-objectives like not dying and finding Dreamer Orbs to progress. It seems easy at first, but the challenge gradually ramps up, along with the variety. There are straightforward romps from start to finish, bigger playgrounds with key items tucked away in each corner needed to advance, obstacle courses and races that require ample reflexes, and even musical themed spectacles in each hub world that transform every stage element to move in time with licensed pop songs; I certainly was delighted when Uptown Funk played and everything from the 2D cut out characters to the collectible bubbles grooved along.

The best levels are the separately unlockable Knitted Knight Trials. These are nail-biting timed challenges that require players to complete a course filled with hazardous environmental dangers as efficiently as possible to beat the designated time. The difficulty is amped up nicely to offer that additional challenge that is somewhat lacking in the main levels. Getting the trophy to complete all of the trials without dying in one sitting will definitely be a huge challenge!

The core platforming gameplay of Sackboy meanwhile, is simple but precise, fun and easy to pick-up and play. You can jump and hang in the air for a little extra distance, punch foes, grab, pull and throw objects, and roll through tight spaces – all without the weird floatiness that dragged down Sackboy in LittleBigPlanet. The movement is slower than your average platformer, however, which does make the pacing feel a little too slow at times, but developer Sumo Digital have overall done a great job in refining the fundamental controls and mechanics. 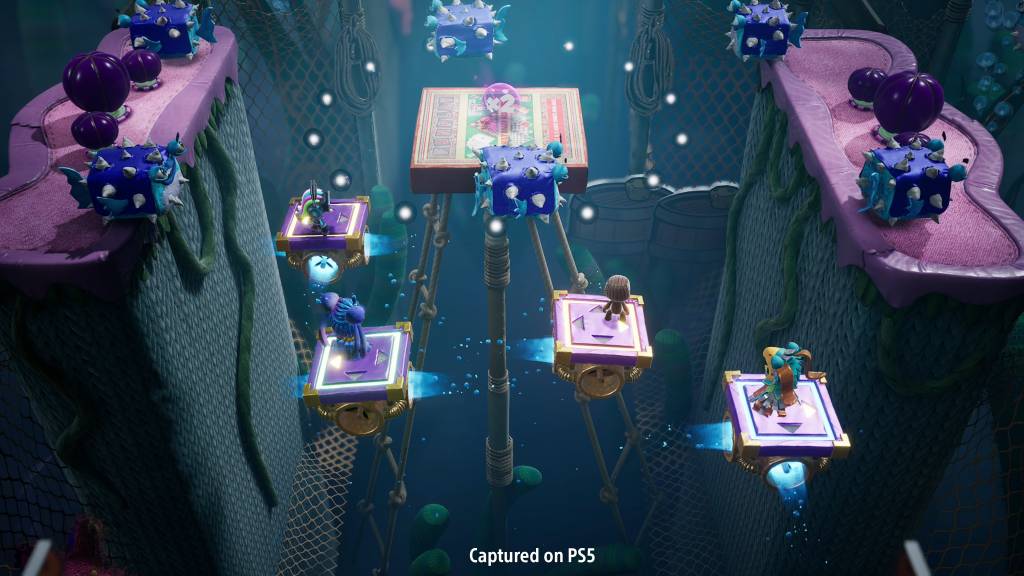 None of these elements would be as enjoyable or fun without the amazing patchwork aesthetic that permeates throughout all parts of the game. Every hub world, level and inhabitant feels intricately stitched together with arts and crafts materials and packed with personality; think cut-out lights, fold-out flowers, animated 2D drawings of creatures in every background, and the enemies you face are cut from some kind of fancy cloth. In terms of its visual style, Sackboy feels like an authentic companion to its big brother LittleBigPlanet rather than an imitator.

The graphical quality that the PlayStation 5 affords is also apparent from the opening cutscenes. Every Sackperson is ridiculously detailed and you can see the wispy fuzz of their fabric. Environmental and object textures as simple as right the knitted ‘soil’ or gleaming Dreamer Orbs you collect to the numerous flashing lights, vibrant colours and animated enemies calling for your attention as you navigate perilous platforms combined with the handicraft style all make for a truly visual spectacle. At 4K and 60fps, it can give other launch titles a run for their money.

One of the best things about Sackboy is its accommodation for co-operative multiplayer, specifically couch co-op. The game is clearly built around multiplayer (though going solo is still fun in short bursts, too) and there’s even optional co-op only Teamwork levels designed around fun puzzle solving and coordination. One feature I appreciated was that level progress and trophies always save for every player, regardless of who is the host; something that’s not always a given. 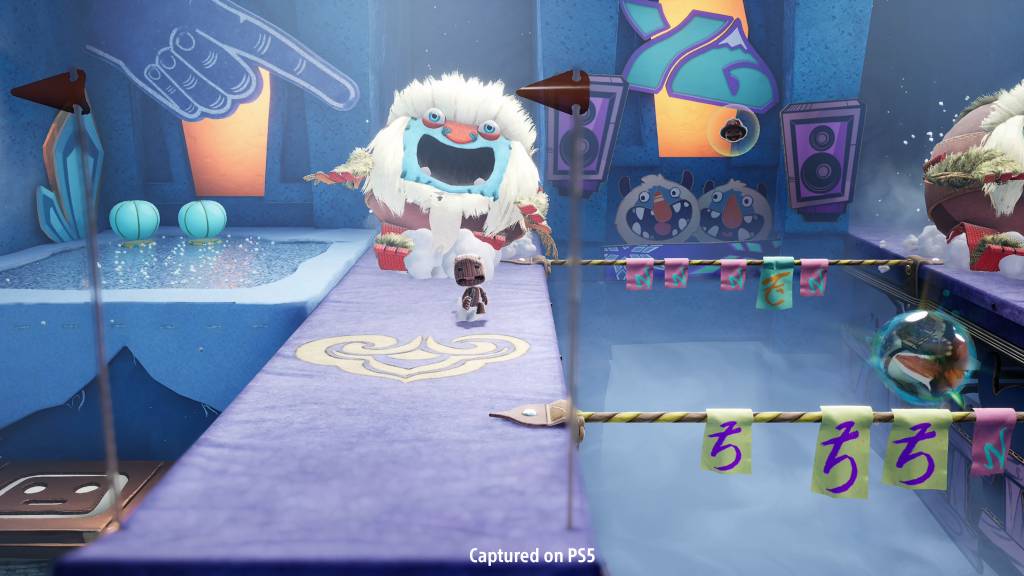 It’s not all cute teamwork and handicraft, however. There’s no cross-gen multiplayer, so you can’t play online with friends if they’ve got the PS4 version. The online multiplayer for both PS4 and PS5 versions is also missing at launch, at least until a future update; for a game perfectly tailored around the multiplayer experience, these are baffling omissions that I hope are fixed. But for anyone worrying about whether the fundamentals – the challenge and the core platforming – are too easy or simple, you’ll be more than pleasantly surprised with the variety and creativity Sackboy has to offer.

Available on both PlayStation 4 and PlayStation 5, Sackboy isn’t quite the typical definition of next-gen, but it’s most certainly a fun and inventive platforming experience oozing with personality and charm that will delight young, old, casual and hardcore players alike – especially those searching for an accommodating multiplayer title that lets you all explore at your own pace.

Highly recommended for fans of platformers, LittleBigPlanet loyalists looking for another reason to knit up their special Sackperson for another grand adventure, and anyone craving a co-op multiplayer experience suitable for all ages and skill levels.