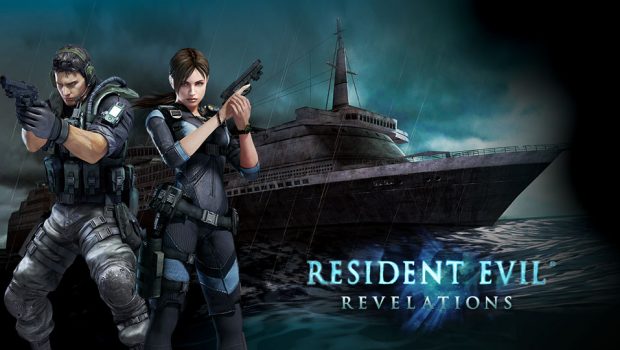 Summary: Well worth a look for those who may have skipped its initial release after becoming disenfranchised with the direction the series was taking.

Despite being ported to pretty much every console known to man since its initial release on the 3DS, I never had the chance to play through Resident Evil: Revelations; in fact, when it first released in 2012, my interest in the series had hit an all-time low and the descent into bombastic action sequences and even more nonsensical plot threads would ensure that my time with the franchise was all but over. 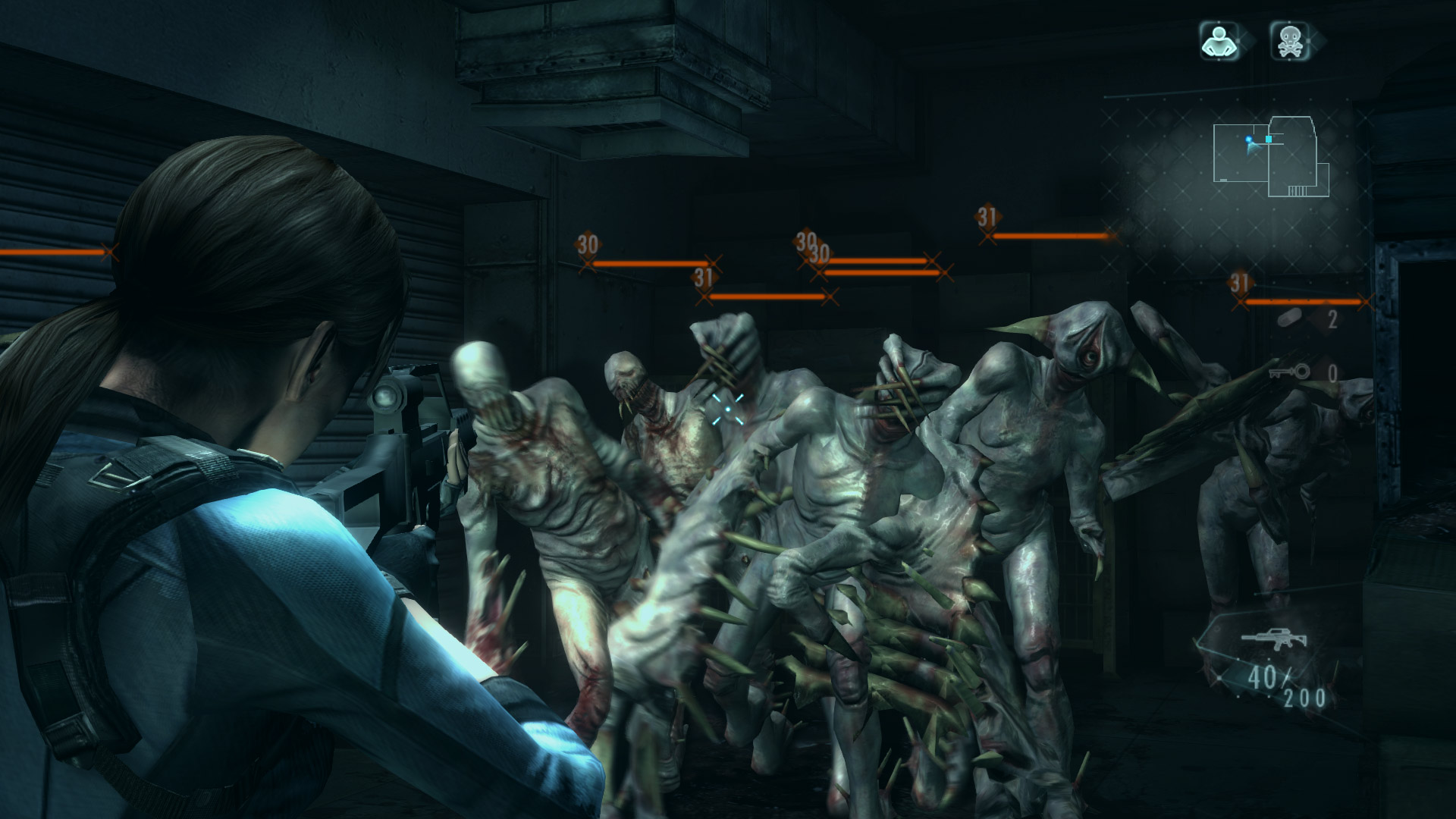 Then Resident Evil VII dropped and recaptured all of those elements that originally made the series such a massive success – True survival horror, inventory management and a protagonist who was an average Joe rather than the superhuman caricatures series stalwarts had slowly transformed into.

Riding high on the wave of the Resident Evil renaissance , I  played through the Resident Evil remake and Resident Evil: Revelations 2, two games I’d neglected due to my waning interest in the series. My only lament was that certain games I had missed over the years, such as the first Revelations and long forgotten titles like Outbreak, weren’t available on any consoles I currently own. 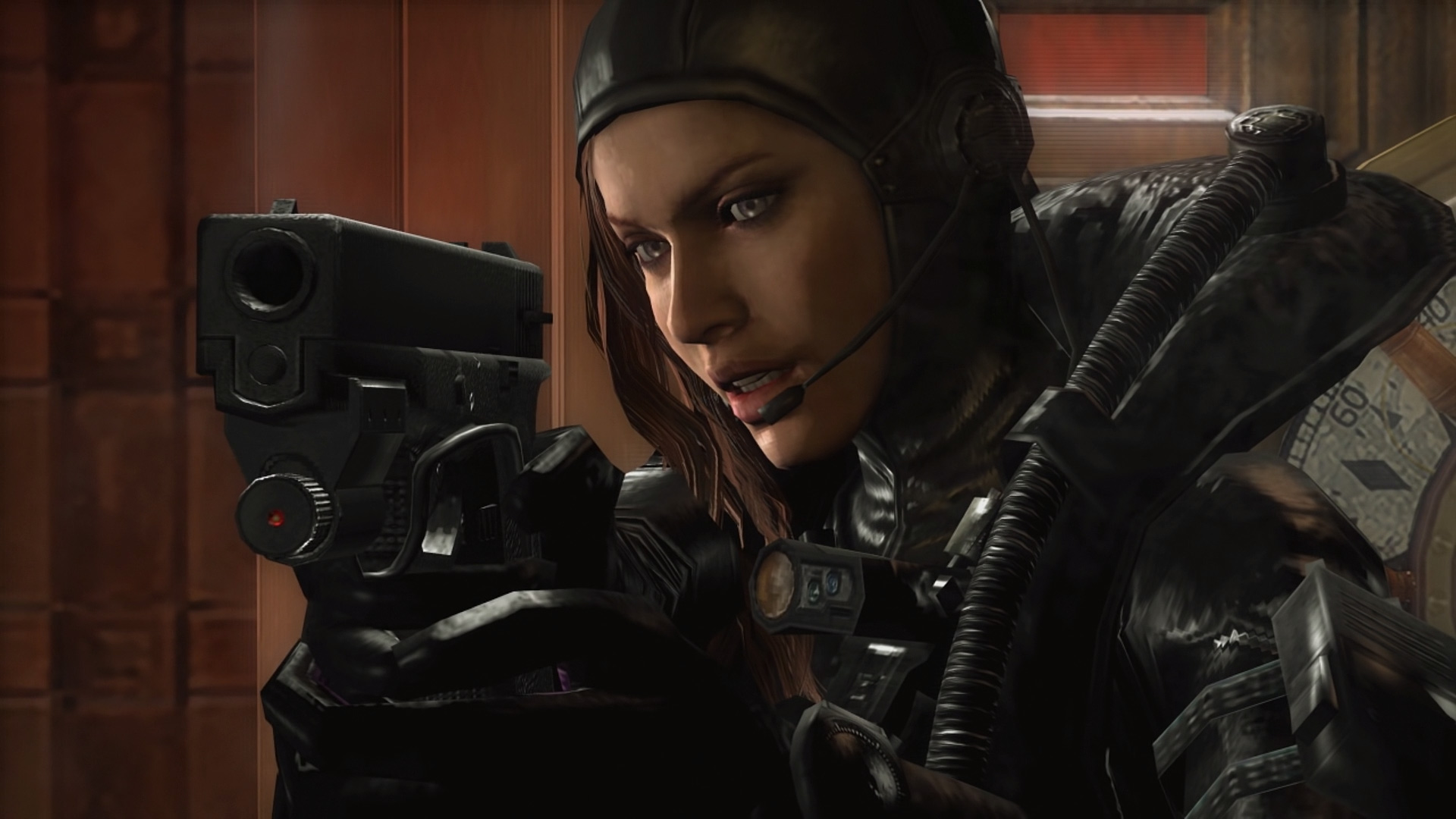 Thankfully, Capcom has been capitalising upon renewed interest in the series and have been periodically releasing remastered versions of classic Resident Evil titles and, finally, it’s Revelations’ turn to once again step into the spotlight.

With the classic duo of Chris Redfield and Jill Valentine back together, this time exploring the confines of a seemingly deserted cruise ship, and an increased focus on classic elements of gameplay like ammunition conservation and enemy encounters actually making for a challenge rather than merely being mindless cannon fodder, Revelations immediately feels like a return to the core components of the original trilogy… Which is ironic considering that I’d been yearning for a return to the classic formula and, lo and behold, Capcom had already released that kind of game five years earlier. 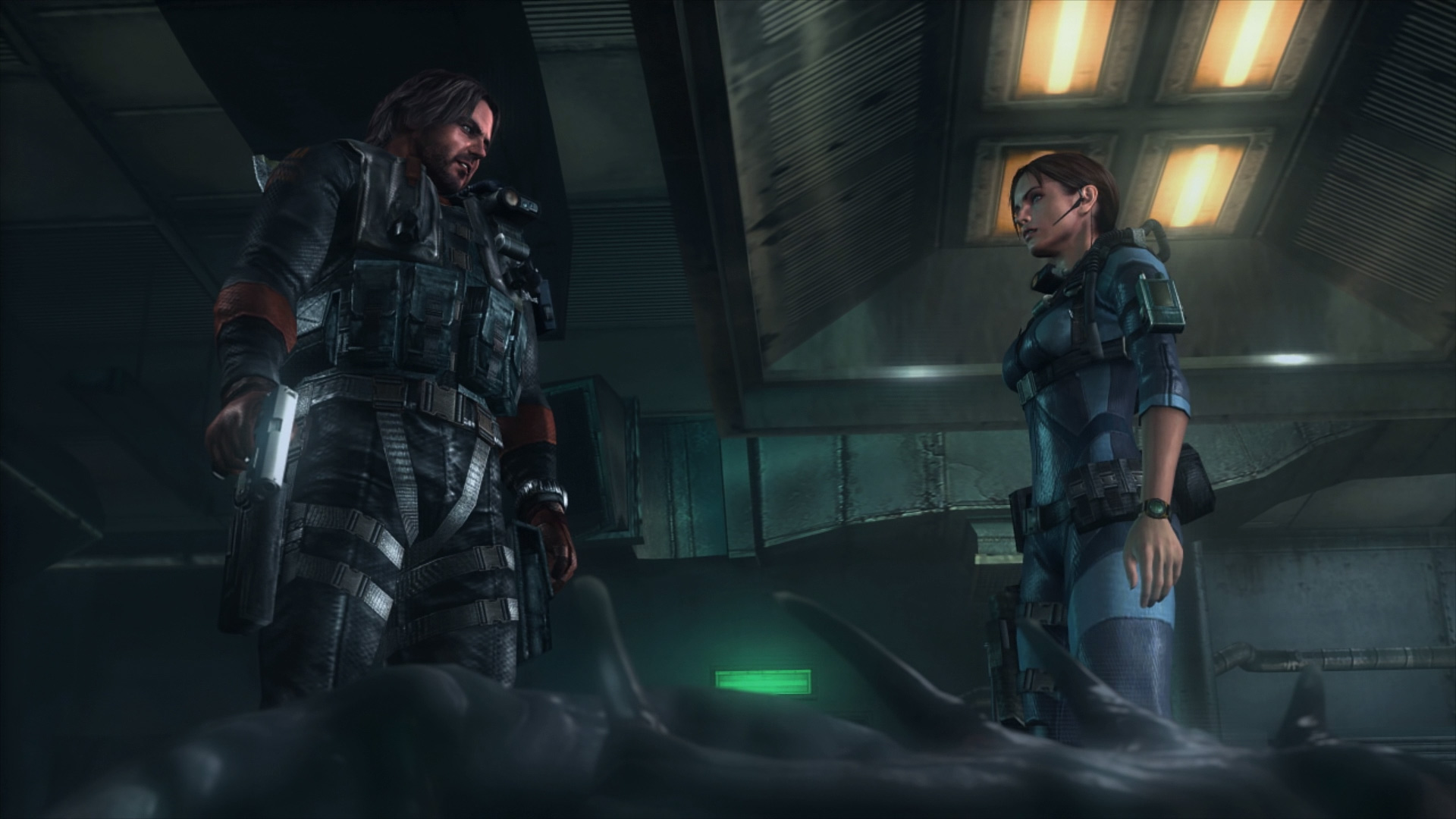 The storyline isn’t as convoluted as latter entries in the franchise have been but it still retains some of that cheesy B-Movie quality and sudden deviations into the bizarre that have characterised the series for the last twenty years, albeit not to the extent that games like Resident Evil 6 managed.

The episodic nature of the narrative can make the game feel a little disjointed, with each chapter essentially having to carry a three at structure by itself, but when viewed as an entire package the storyline is intriguing enough for the desire for conclusion to act as an incentive for player to play through to the end credits. 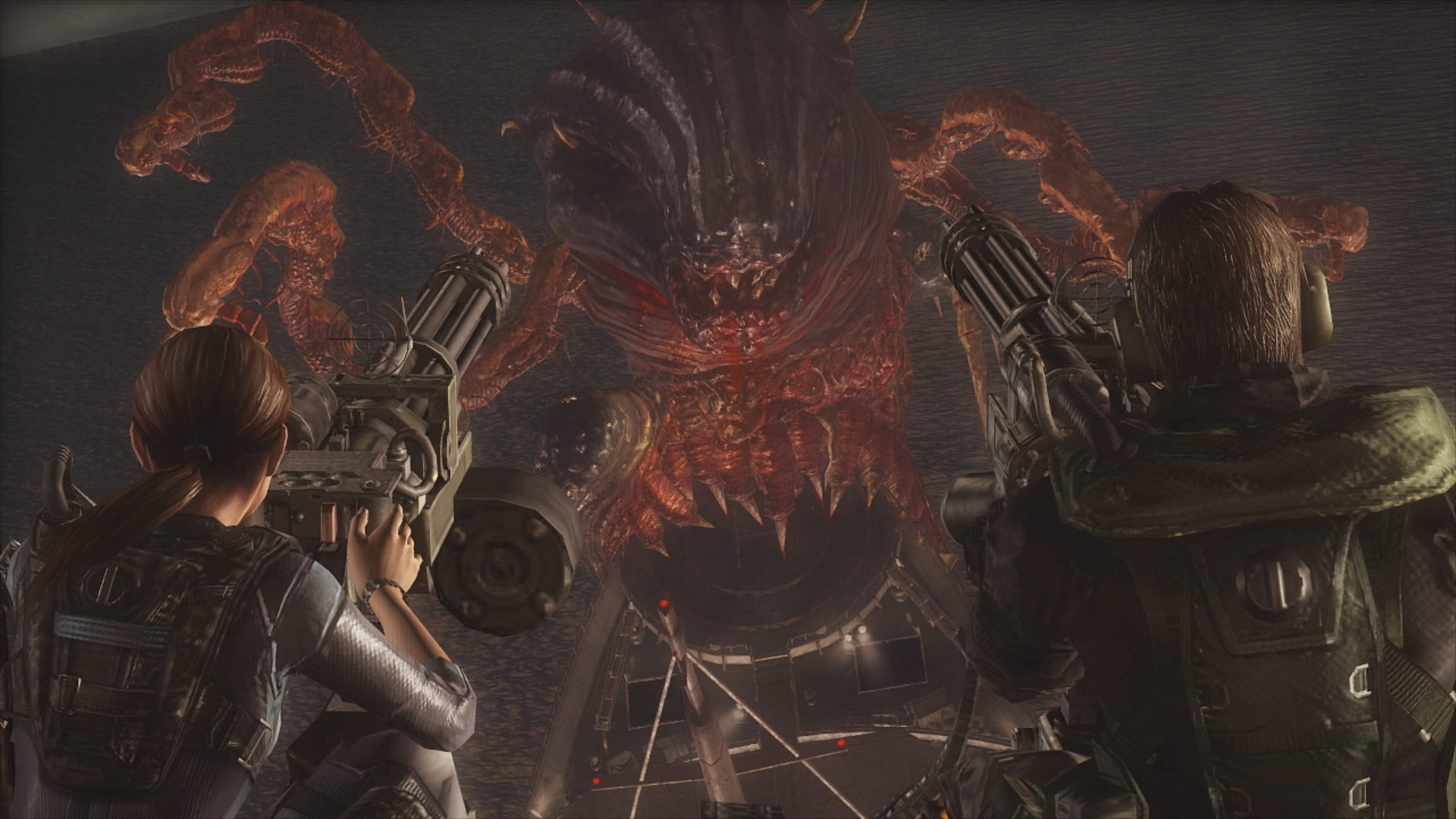 If you’ve played any of the earlier entries in the series, particularly the remake, then you’ll feel right at home with the gameplay elements. With cumbersome tank controls a thing of the past, Revelations adopts a movement scheme closer to Resident Evil 4 but the combat harkens back to the mechanics of the original trilogy; a steady hand is vital if you have any hope of surviving and the reduced ammo means that you have to try and make every shot count. Unfortunately aiming isn’t as easy as it should be, with a sluggishness to your reticule movement that can make lining up shots an arduous process once you find yourself faced with more than two slowly shuffling enemies.

The most notable addition to Revelations is the scanner, which can help locate ammunition and provide rewards for scanning enemy creatures; whilst admittedly far from a game changer, this is a nice addition that helps distinguish the game from its contemporaries and frantically scanning an enemy in the hopes that you’ll receive a much needed health boost makes for some deliciously tense situations. 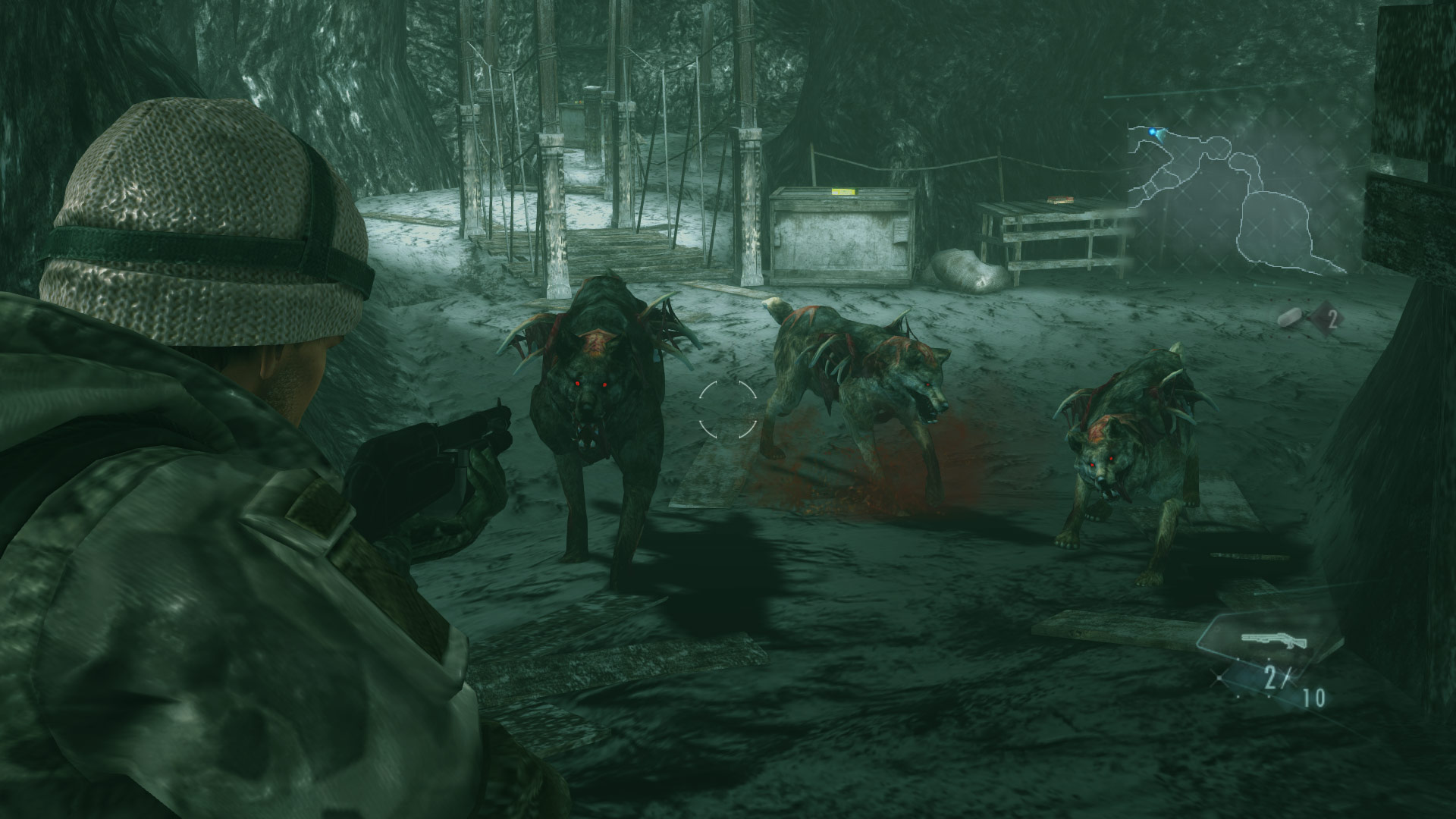 Touted as the definitive version of the game, Resident Evil: Revelations has received a graphical polish that goes quite a ways towards hiding the game’s handheld origins, although on closer inspection you begin to notice the presence of muddy textures and low quality animation. Your mileage will vary on whether or not this will affect your enjoyment of the game – Personally, I found it easy to overlook the budgetary and technological limitations in favour of the solid gameplay and relatively bonkers story

The audio department is where Resident Evil: Revelations truly shines, with genuinely unnerving ambient noises and a soundtrack that peaks at just the right moments for maximum sphincter-tightening effect; for a game that’s verging on being six years old it’s surprising how well the audio holds up against the modern standard. 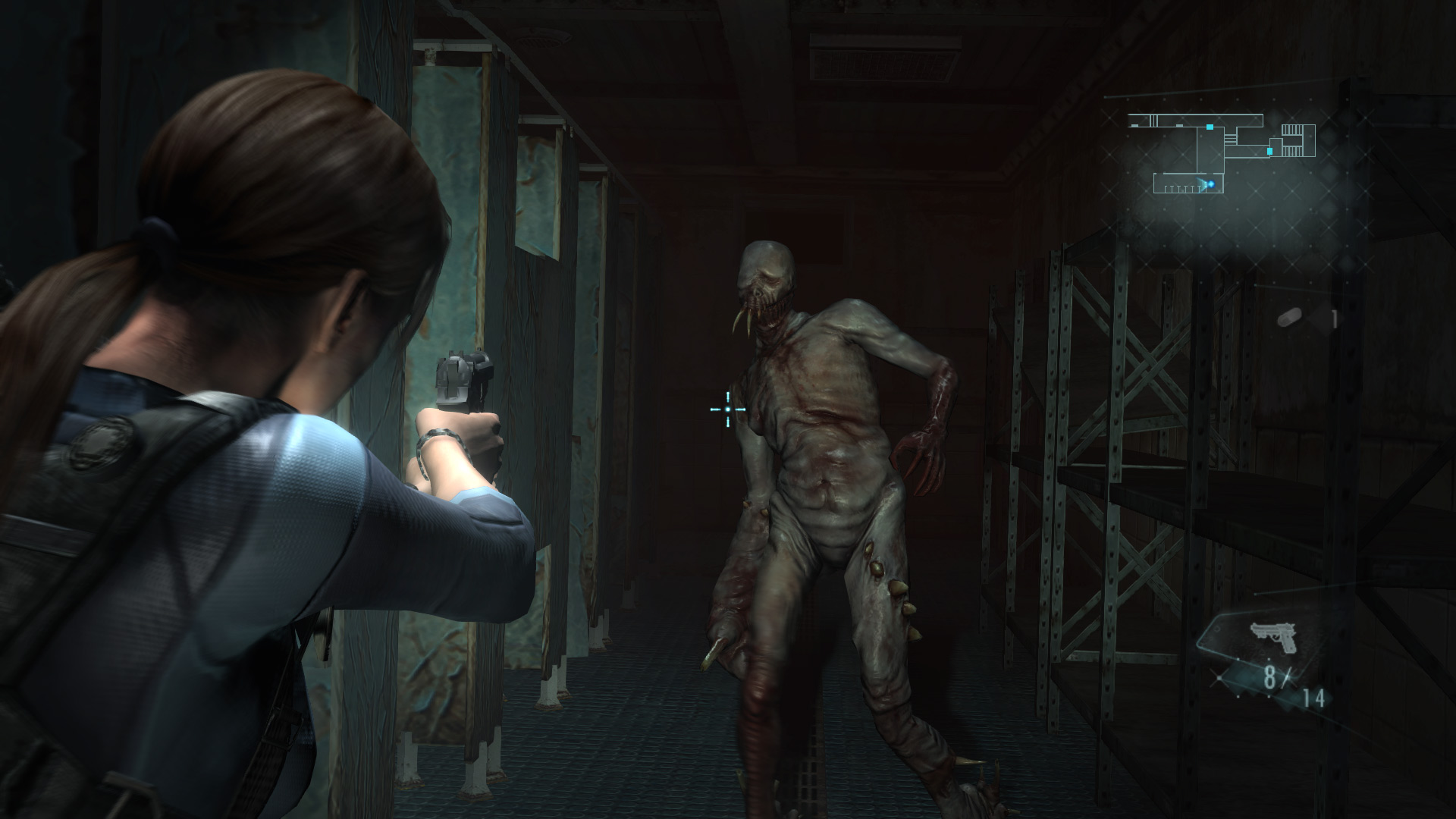 Besides the visually overhauled campaign, there’s also a Raid mode where players can return to campaign levels that have been altered slightly and play through using different characters, allowing for online co-op. This mode also features an entirely new chunk of content dubbed Ghost Ship: Chaos, which may or may not be enough to entice players to return to the game once again.

At a bargain basement price and with a fairly hefty chunk of content for players to work through, Resident Evil: Revelations is a welcome addition to the growing stable of current generation Resident Evil ports. 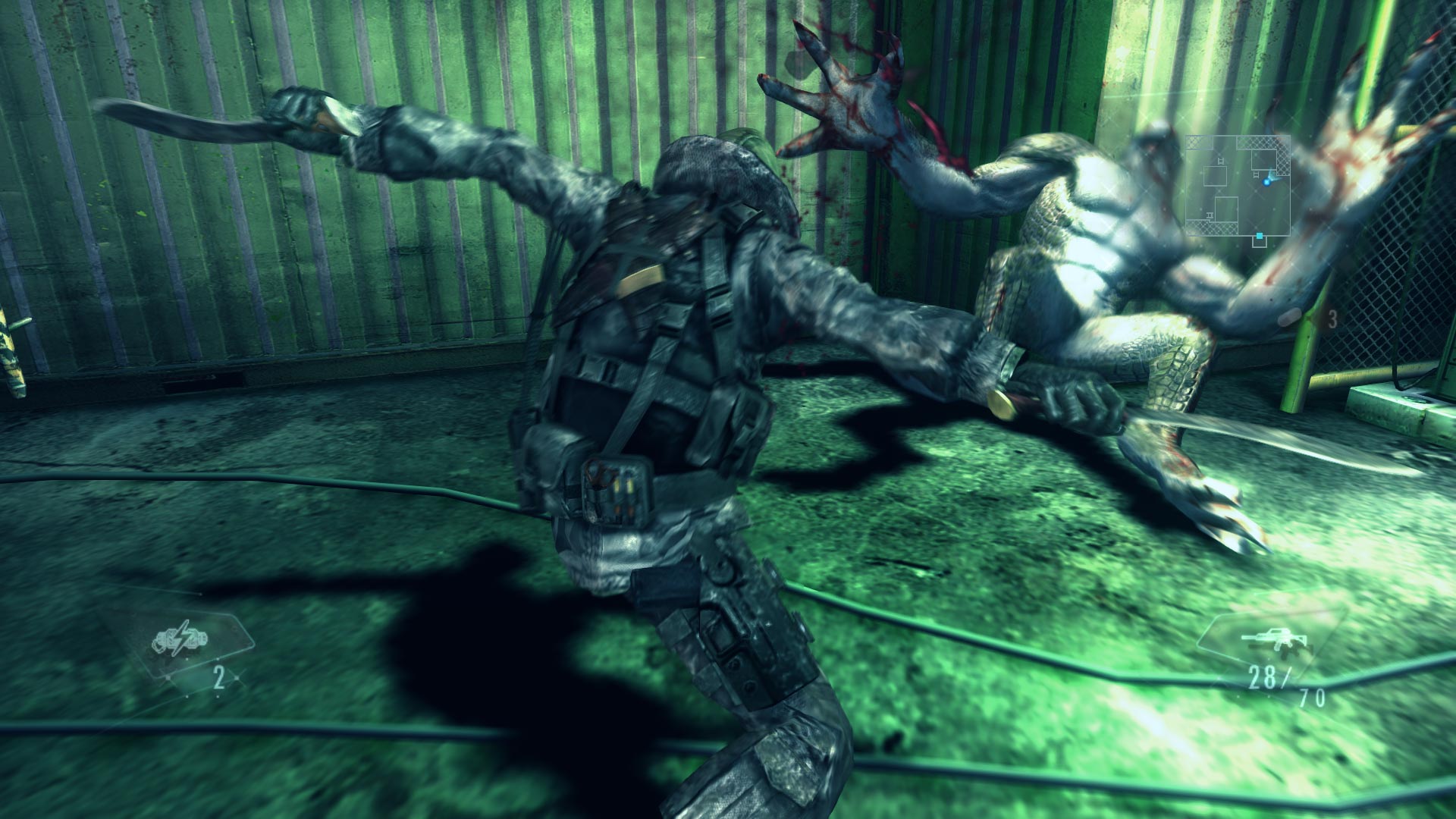 Is it perfect? Well, no. Counter-intuitive controls and sluggish aiming can detract from the experience somewhat and the more confined nature of the cruise ship corridors mightn’t be to the taste of everyone, although the environments do open up as the story progresses.

Despite these issues though, I’d wager that Resident Evil: Revelations was probably the best entry in the series during those bleak years between 4 and VII and is well worth a look for those who may have skipped its initial release (And multiple subsequent ports) after becoming disenfranchised with the direction the series was taking. 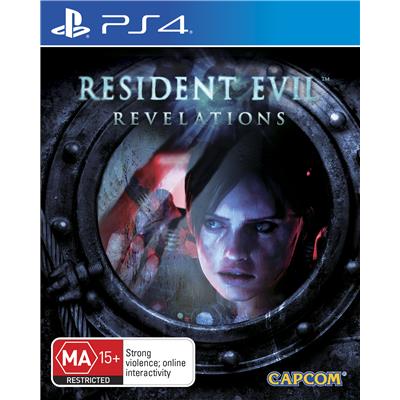