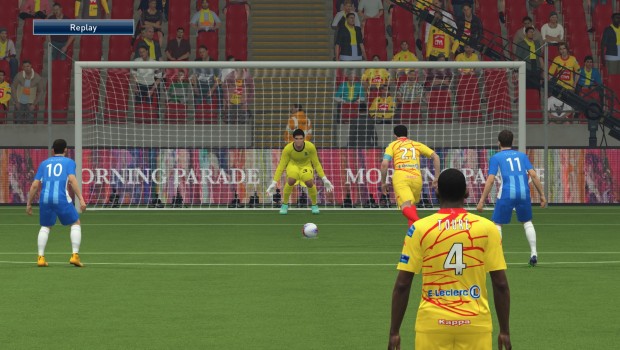 Summary: A rotation option, but not a primary starter

Pro Evolution Soccer 2015 competes directly with FIFA 15 to be MVP of the football simulator. They are opposing teams—rivals—locked in a never-ending struggle for supremacy. Each year they trot out onto the football pitch and show us their best moves. FIFA 15 is like the star striker who is lavished with praise and has all the best sponsorship deals—everybody loves the spectacle of a blistering run and acrobatic goal. PES 15, on the other hand, is a no-nonsense, stalwart defender who cares little for the extravagance—he’s paid to keep his head down and stop goals. 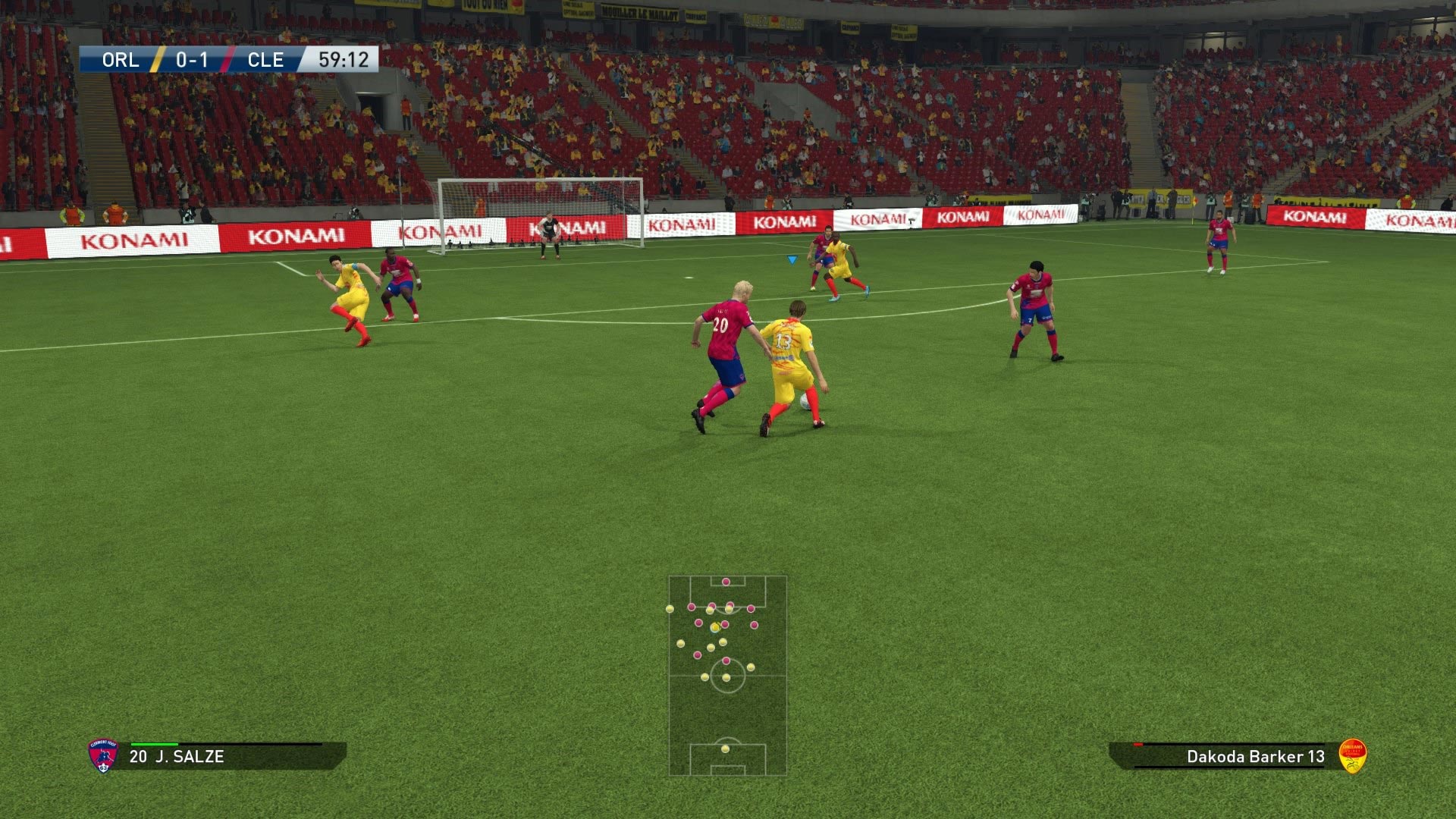 PES 15 is supposed to be a no-frills approach to football; unfortunately, it seems to have achieved more of a poor-frills outcome. Replays in FIFA 15 were exciting but the uninterested could skip them with a single button press; PES 15 requires three button presses to skip the overly long celebrations, ‘TV’ replays, and player-controlled replays. Every goal scored results in the same lengthy process, which delays the return to actual footballing. Weak commentary also contributes to the frustration, but has its own detrimental effects. The biggest issue is the shortage of lines: nearly every single goal is scored off a ‘delicious’ pass, and half of my team are stand-outs that can ‘decide the outcome of matches’ on their own. Part of FIFA 15’s charm is that it recreates the experience of watching a live match; PES 15 is best when the commentary is muted or turned down low.

Graphically, PES 15 abandons the photorealistic route. The stylised look is not necessarily a flaw—though I did love the presentation of FIFA 15—especially when you consider the shortage of licensed teams and players. Photorealism doesn’t make it any easier to recognise players that nobody knows. This has always been the uphill battle for PES: FIFA is the official, licensed product, so it can use actual leagues, teams, and players. But the smattering of official teams and players in PES 15 seems to only highlight what is missing, and a bland graphical style doesn’t enhance that deficiency. 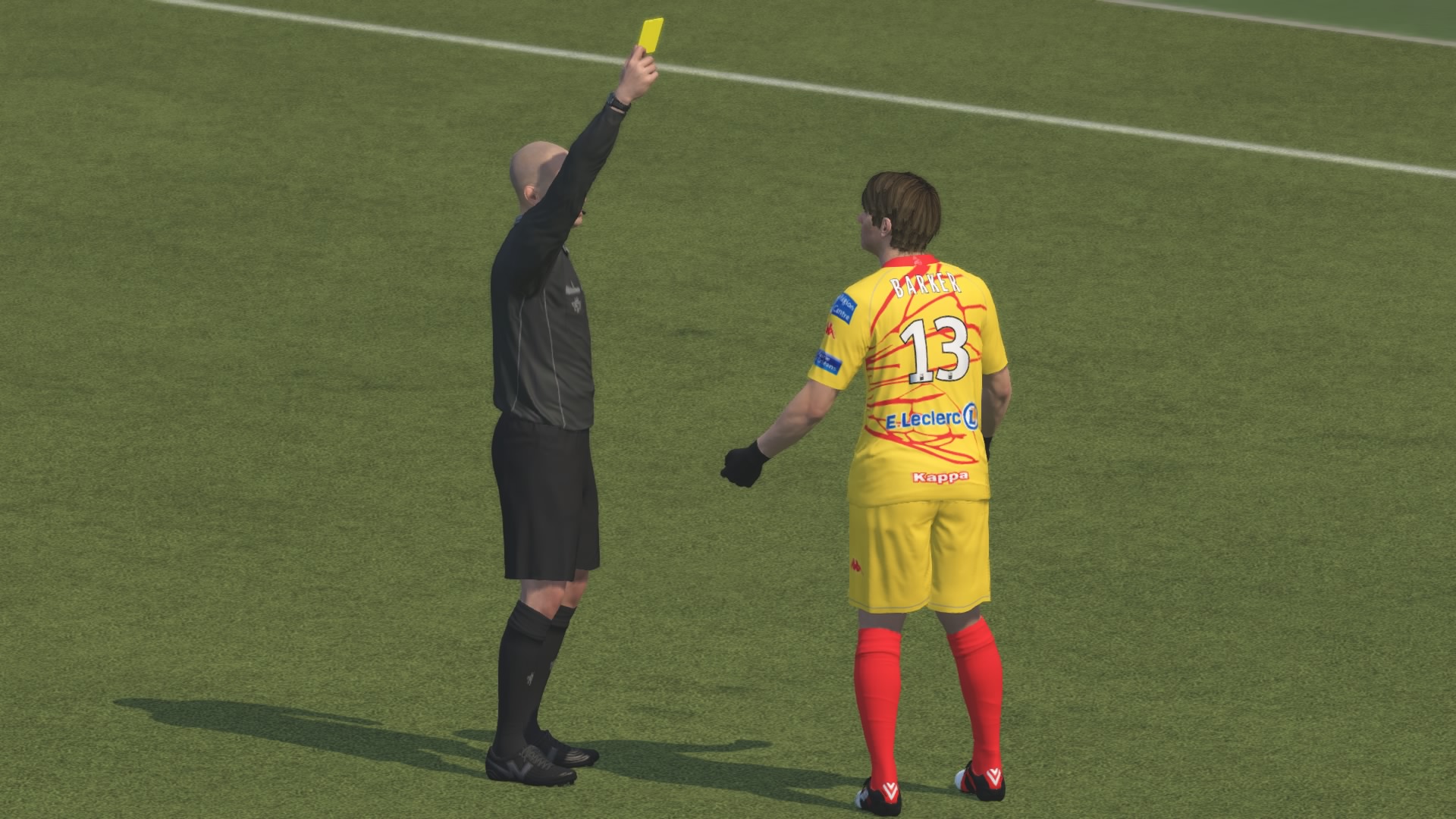 In terms of gameplay, PES 15 does a good job. Dribbling feels impressive and gives a sense of control. Skill moves can be semi-automated—all the benefits of flashy tricks and feints without the complicated button pressing. Generally, movement on the ball feels fluid and exciting. But not everything is streamlined: calling for pressure in defence requires a double-press and then hold of the circle button; in FIFA 15, this requires a single button hold. Pass assistance is also much less forgiving in PES 15. Even with the assistance turned up to the maximum (and holding L2 to show the pass direction), many of my passes went straight to an opponent’s feet. Despite feeling incredible on the ball, the moment I tried to pass or initiate an attacking movement, everything crumbled.

PES 15 outshines FIFA 15 in the tactics department. Match tactics can be tweaked so that players will change formation based on different circumstances. The number of players who push up in attack can be changed, as can the number that track back once possession is lost. It offers a lot more control behind the scenes and allows the shrewd tactician to dictate player behaviour without directly controlling them. 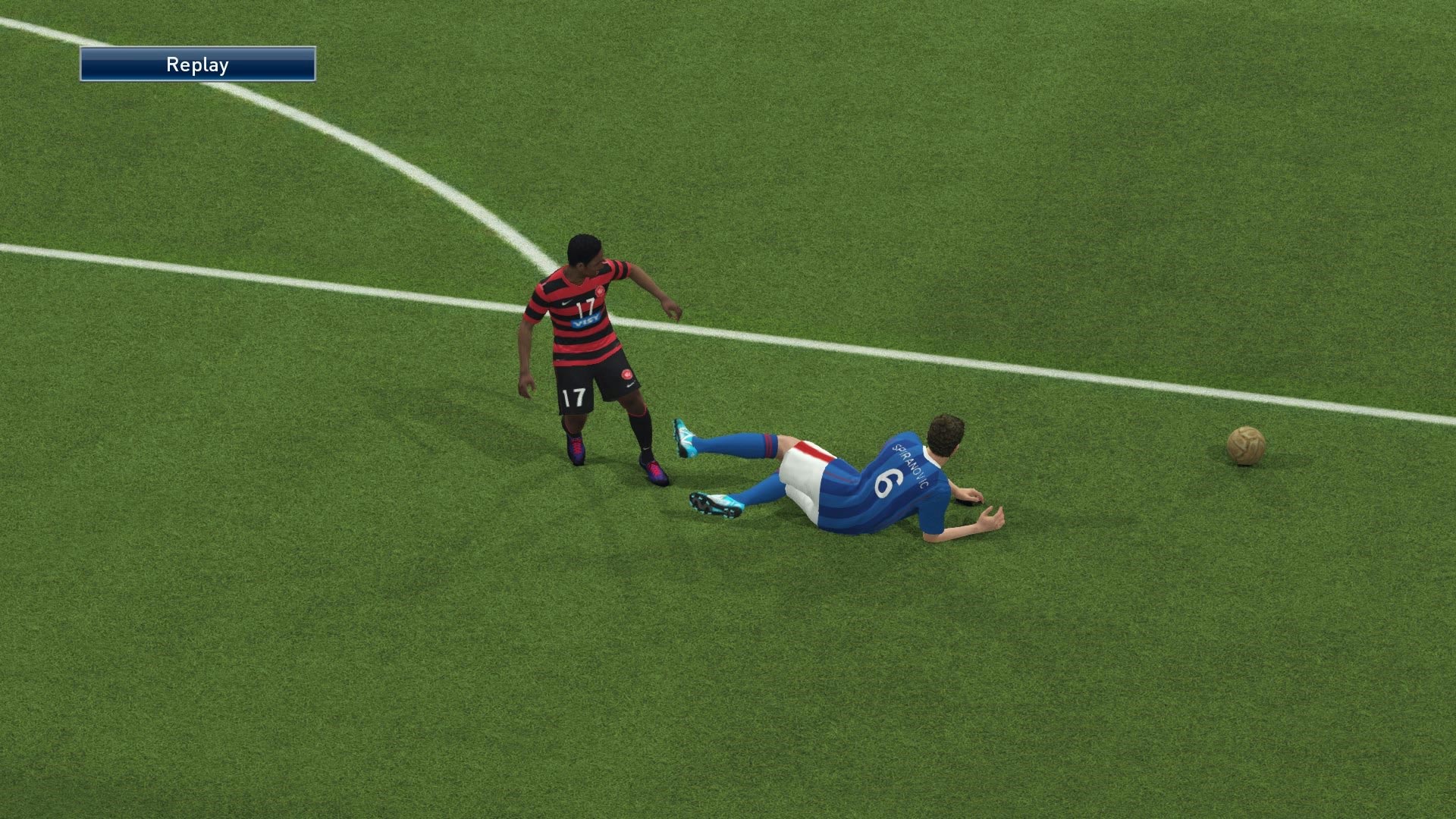 But better tactics doesn’t necessarily mean smarter players. In Become A Legend mode—where I played 17-year-old me as an attacking midfielder who was shunted into right winger by my manager—my team mates seemed to hate me. I would make the right runs, get into space, but the other players would consistently opt for a long lob pass into danger rather than the short, easy pass to an open player. With no option to call for passes or tell team mates to shoot (as in FIFA 15), I was left feeling very disgruntled.

Become A Legend is a definite improvement over the equivalent mode in FIFA 15. The ability to tweak personal training also results in far more sensible stat progression. Playing in matches earns experience points that are used to improve skills; FIFA 15 just adds points based on arbitrary achievements in matches. But these improvements are tarnished by a bizarre camera angle that often placed me off screen and the inability to call for a pass. It felt like I was playing on a team of 11-year-olds who were still playing chase-the-ball and looking for personal glory over teamwork. These issues contributed to my constant poor match ratings, despite being almost twice as good as every other player on my team, statistics-wise. 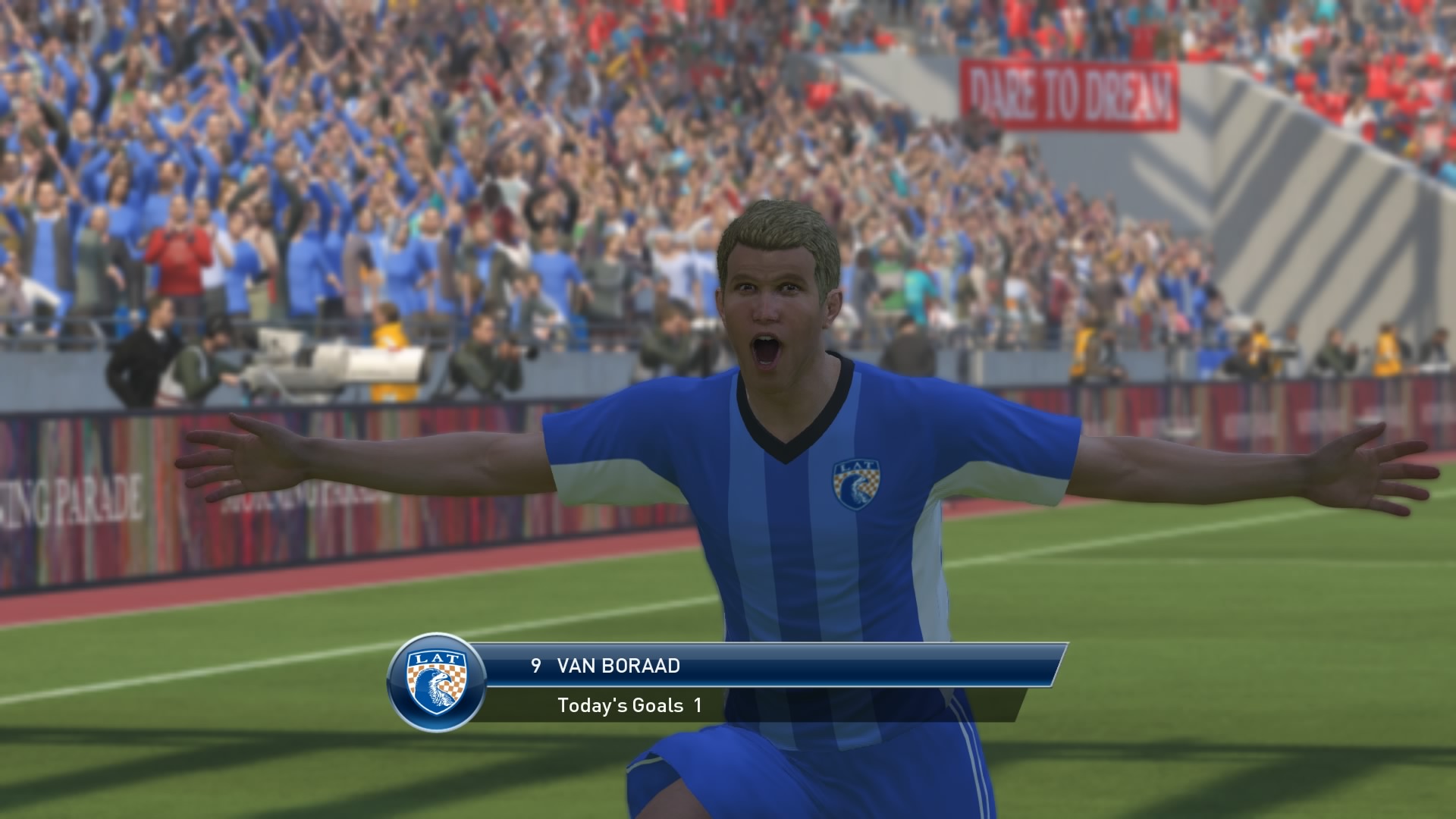 Master League is also better than the manager mode of FIFA 15. Scouting is rudimentary, but much clearer and easier to figure out. Each player can be given training focuses to improve on problem areas. New players can be signed from other teams, or brought up from a youth squad. The flexibility of the match tactics really enhances Master League—being able to play one defensive midfielder deeper than the other meant that my players were nearly always performing their optimal role. My favourite inclusion is ‘coach mode’, which allows me to watch my computer-controlled team act out my instructions. Switching between match view and a two-dimensional tactical view also gives greater insight into what is happening—one view shows what parts of the pitch are getting the most action, which meant I knew who to substitute and what positions needed improving.

Some aspects of Master League are bizarre, like paying the entirety of a season’s wage bill in one lump sum. Negotiations are a bit haphazard and lack the intricacies of something like Football Manager, and are also limited by arbitrary ‘tokens’—I should be allowed to buy as many players as I want within the transfer window, not be limited to the chance to buy five per year. As far as management simulators go, PES 15 blasts FIFA 15 out of the water—but it still falls well short of FM15. 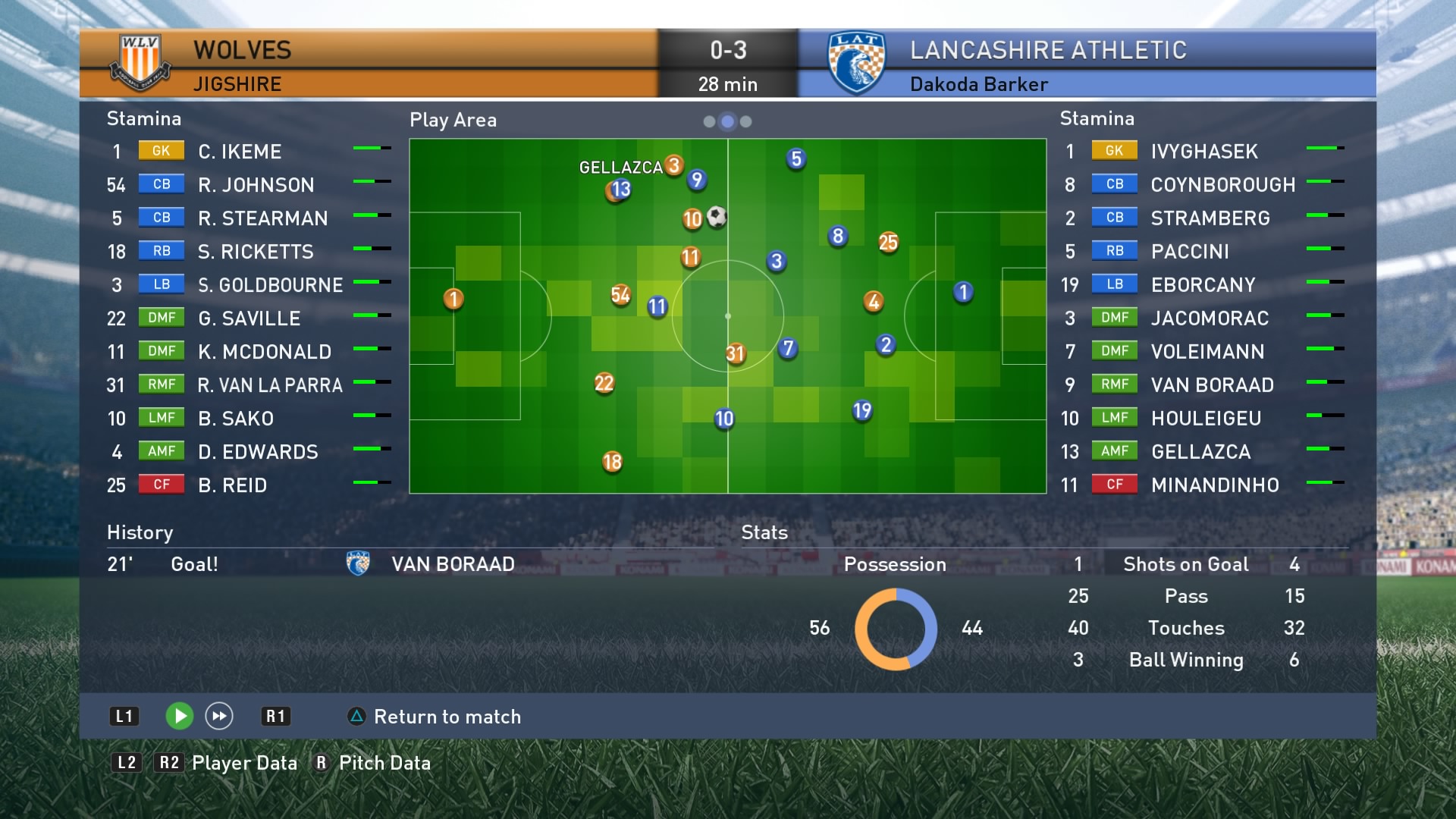 With the mantra ‘the pitch is ours’, PES 15 believes that it has done enough to usurp the title from the FIFA franchise. While PES 15 has improved on a number of features, there are some issues that dampened my experience. Pro Evolution Soccer 15 might have played well, but FIFA definitely still owns the pitch.