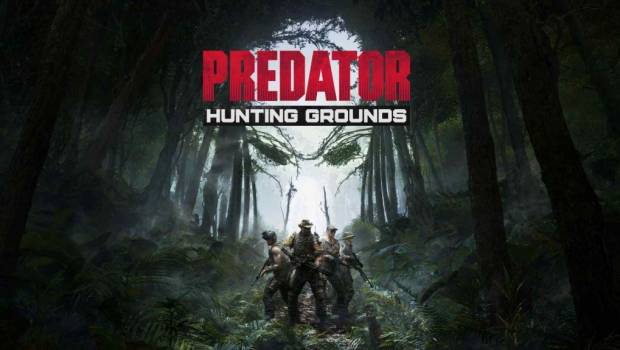 Summary: For what it’s worth there is enjoyment to be found here but it only lasts for a few hours and then you’re set for a tedious grind if you hope to unlock that cool facemask or beret; the gameplay loop just isn’t compelling enough and there isn’t anywhere enough content here to retain a fanbase with any real kind of longevity.

The Predator franchise hasn’t had the most illustrious career when it comes to gaming, with many lacklustre efforts bearing the name of cinema’s greatest hunter but failing to truly capture the essence of what makes the creature such a compelling antagonist.

With that said, Concrete Jungle on the PlayStation 2 was a super fun experience despite clearly being a budget effort and the old side scrolling AVP titles weren’t without merit, so there is definitely some potential to craft a compelling gaming experience using the license. 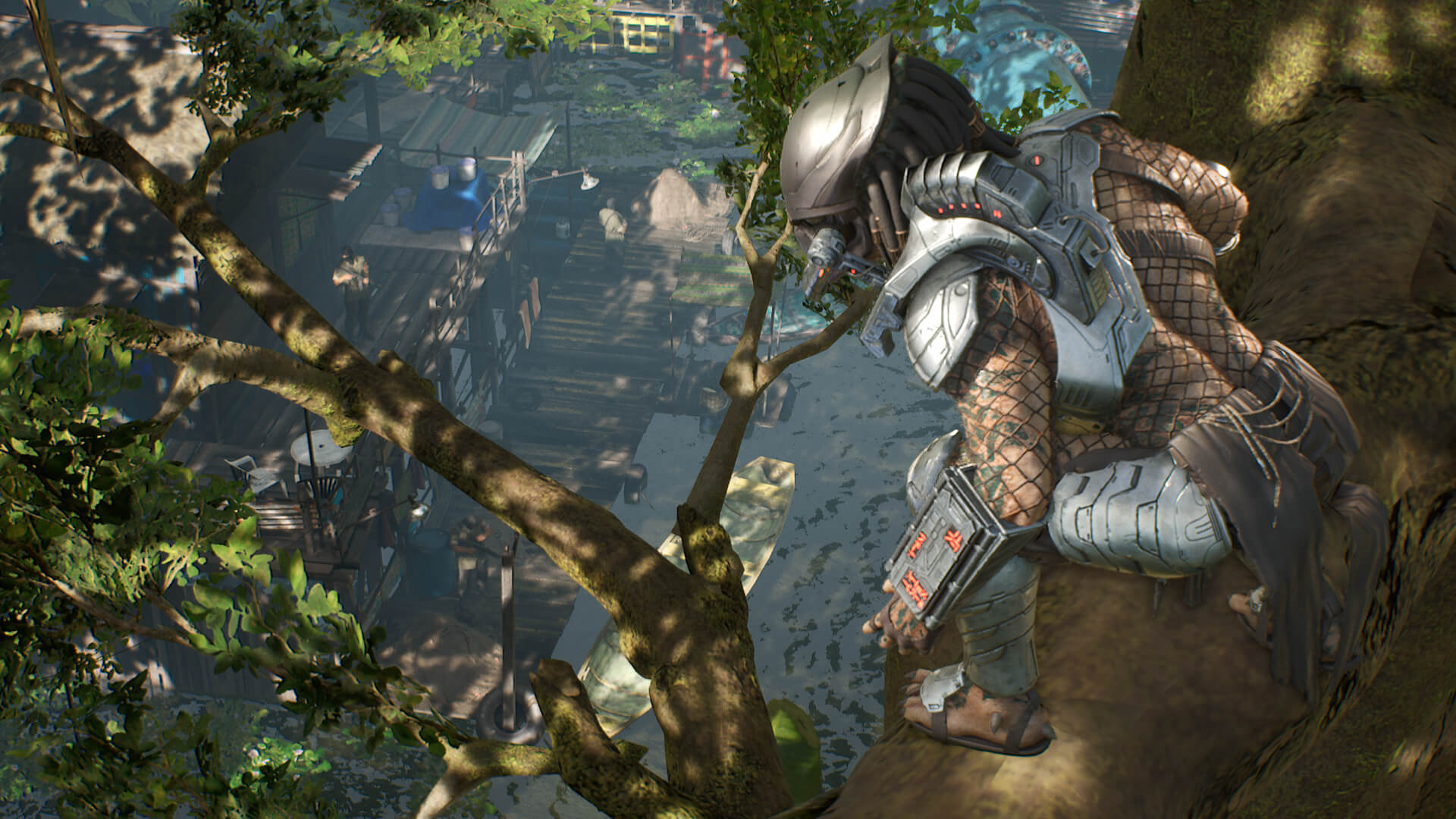 Unfortunately, IllFonic’s recent stab at the series (pun intended) fails to hit the mark, offering up an asymmetrical multiplayer experience that provides a few hours of genuine entertainment but little else to retain the playerbase.

IllFonic has experience with the genre, having developed the well-received Friday the 13th game before development efforts had to cease due to the legal quagmire the aforementioned horror franchise rights were going through, but the latter title was easily the more engaging 4v1 games on the market, so hopes were relatively high for Predator: Hunting Grounds… Until the trailer and Beta dropped, with many fans noting the lower quality graphics and lack of a rewarding gameplay loop. 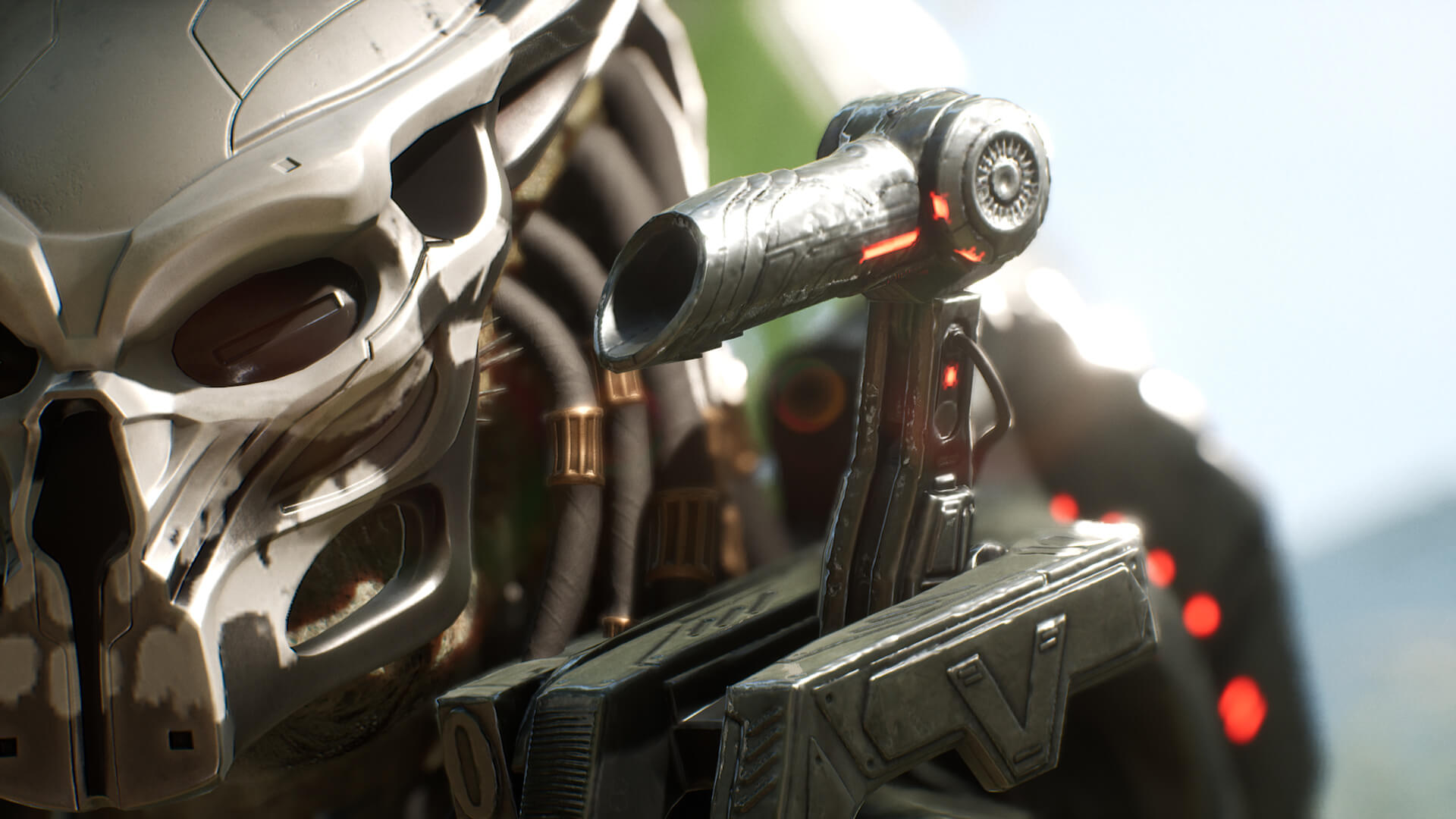 Predator: Hunting Grounds sees you take control of either a member of a fireteam or the titular alien killing machine before being dropped into one of a handful of jungle areas; for the Predator, the mission is simple: Kill each and every last fireteam member. If you choose to load up and drop in as one of the fireteam squad you’ll be presented with a series of objectives that ostensibly offer up a bit of variety amongst the objectives but ultimately all boil down to pressing square on something and holding areas until a timer counts down.

Storming the camps as a heavily armed commando can admittedly be quite fun for the first few hours, particularly if you get a communicative team behind you. Players can cover themselves in mud to help avoid the Predator’s thermal vision and there are revive missions available for survivors to attempt if some members of your team get picked off before you manage to complete the objective and then, of course, “Get to the choppah!” 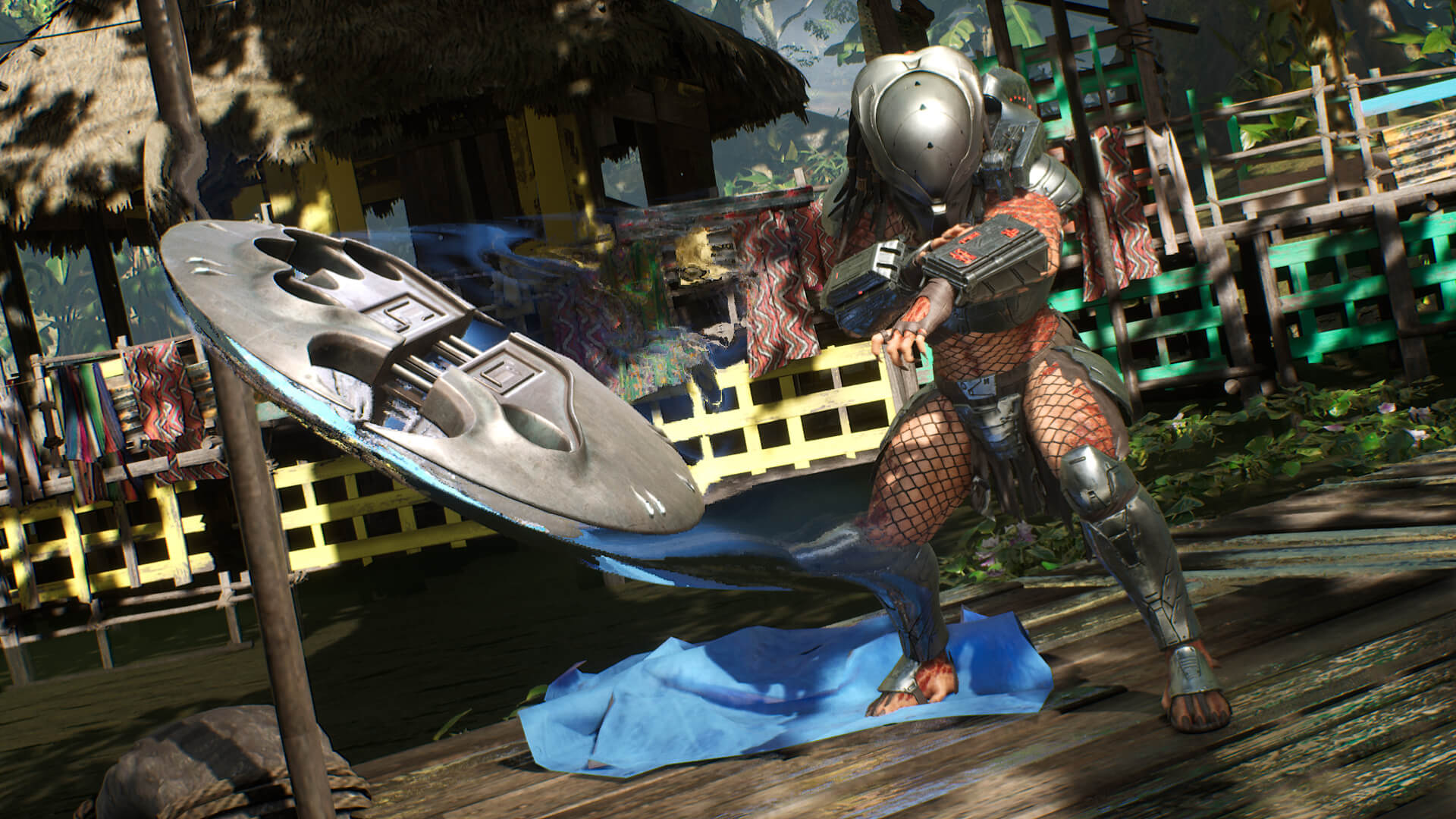 The gunplay is serviceable enough, albeit nowhere near as refined as what you’d find in a bigger budget title like Call of Duty, and if you can time it just right you can even parry the Predator’s blade attacks with your knife, although it’s not the most reliable method of engagement. Running as a team and wiping out camps of faceless drug cartel members and the like ca, again, be fun for a while but it soon becomes evident that the enemy A.I is severely lacking and offer up little actual challenge, essentially turning things into a shooting gallery of sorts.

Of course, there are bigger threats waiting in the jungle, but, as a gun toting fireteam member, games often went one of three ways: The Predator would immediately rush us and get wiped out, forcing us to quickly scramble to evacuate the area before its self-destruct device went off (you can disarm this apparently but I’m yet to see any of the valiant souls I’ve played with actually succeed), again the Predator would rush us and quickly slice the entire team into ribbons or, and this happened the least frequently, we would encounter a Predator who took his time and actually stalked and picked off the team, making for a frenetic and harried rush through the jungle as you genuinely feel the pressure of being hunted. 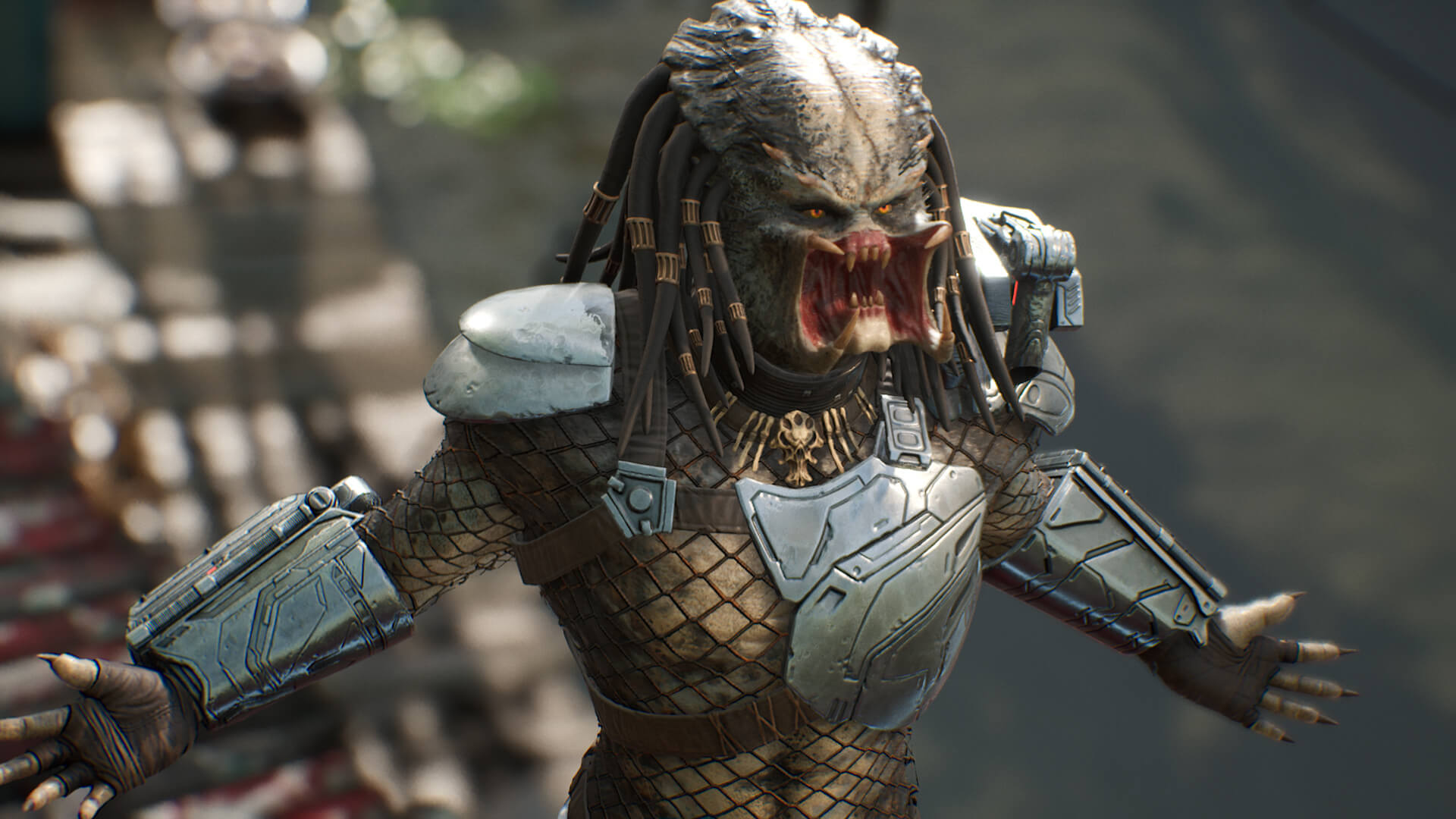 Playing as the Predator offers up far more gameplay options than the fireteam, allowing you to move through the jungle canopy with ease, activate vocal distractions, use your cloaking device and pick off your prey with a much larger arsenal at your disposal, such as the shoulder cannon and throwing disc.

You’d assume that taking control of the Predator would make for the more desirable option between the two playstyles but you’d only be partially correct; whilst it is fun to hop from tree to tree and divide and conquer the squad, clunky controls hamper things and, depending on how you approach the game, you may find that the Predator feels woefully outclassed, especially when you first start out. 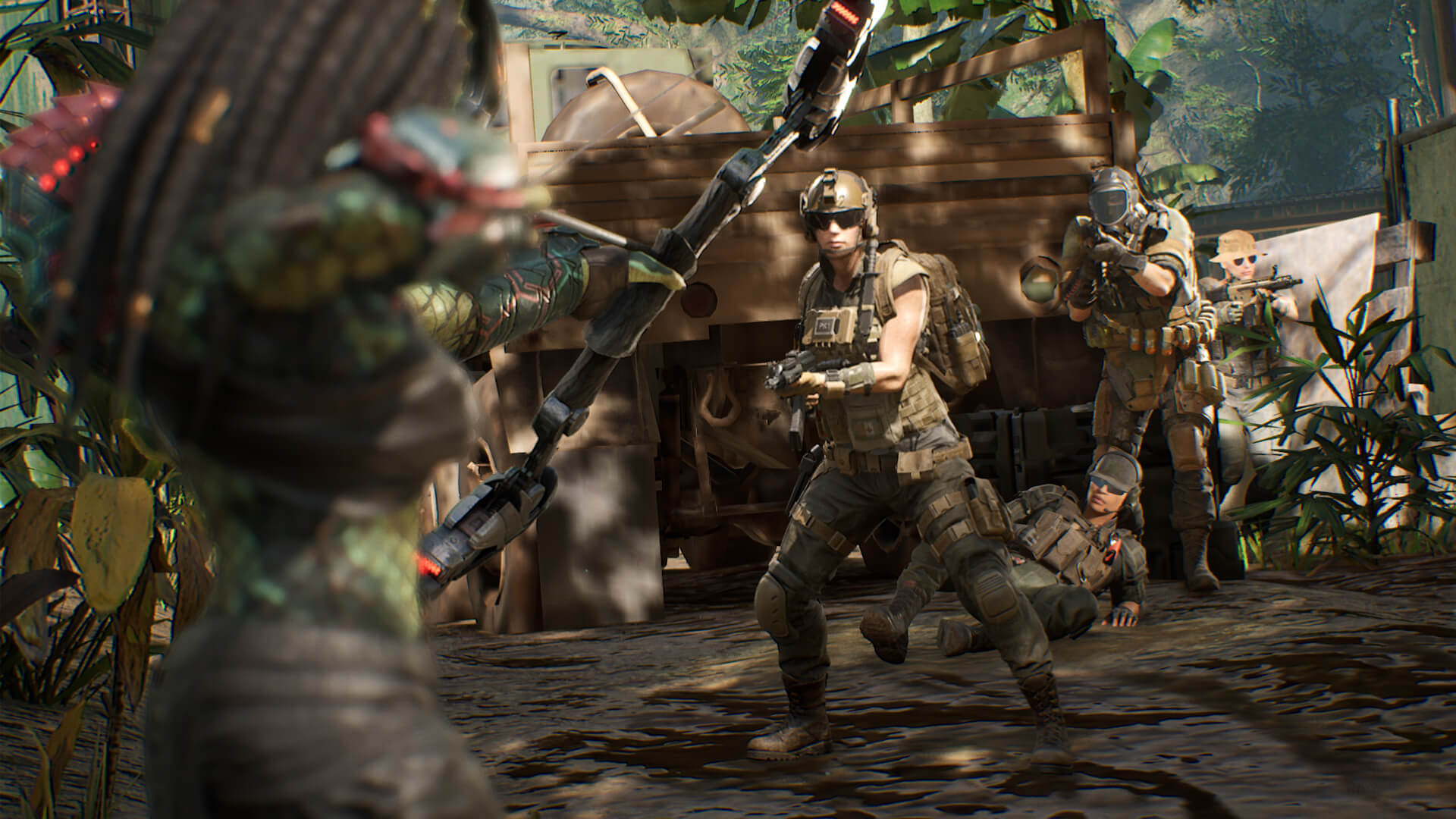 Things are mitigated somewhat by the inclusion of a short tutorial but the control scheme for the Predator in particular lacks the kind of intuitiveness you’d hope for when taking control of a pain dealing merchant of death.

There are customisation options and upgrades on offer but few seem to offer the incentive necessary to work towards unlocking them, as even cosmetic items seem steeply priced, and some of the upgrades that are locked to your player until you reach higher levels, most egregiously on the Predator side of things, seem like abilities that would have really served to alleviate the feeling of being underpowered during those early hours of playing. 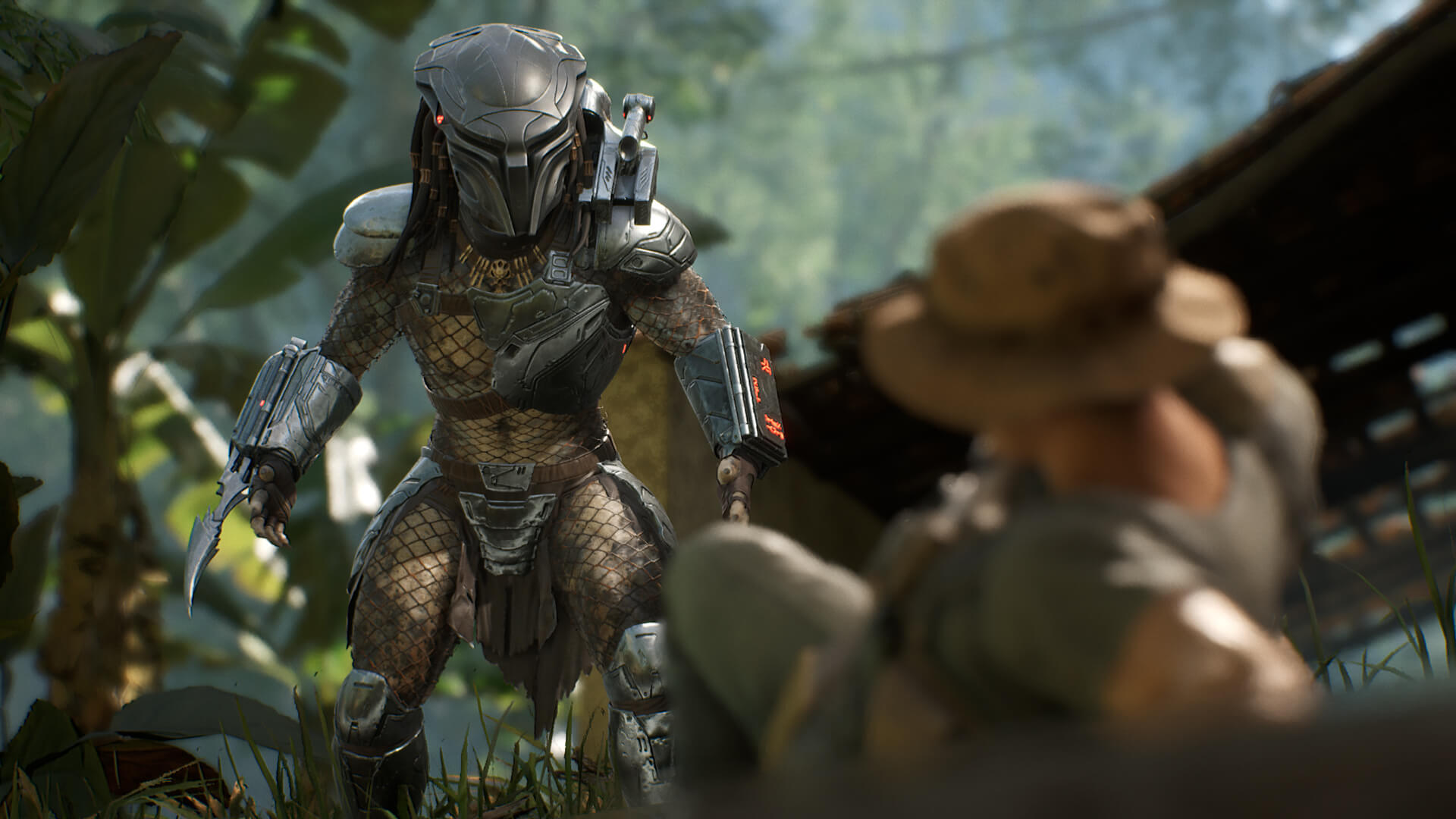 I’m sure you’ve heard all the chatter by now, but if not allow me to reiterate – Predator: Hunting Grounds is not a good looking modern console title. Hell, it would barely have been considered a decent looker back in the early days of the PS3. Bland character models, copy and paste enemies and environments and an overall uninspired aesthetic really serve to drag the game down a few points in the visuals department.

The audio for the Predator is pretty top notch and the inclusion of the banging theme song from the ’87 film will raise the hair on the back of your neck, but the fireteam and enemy audio is fairly generic. 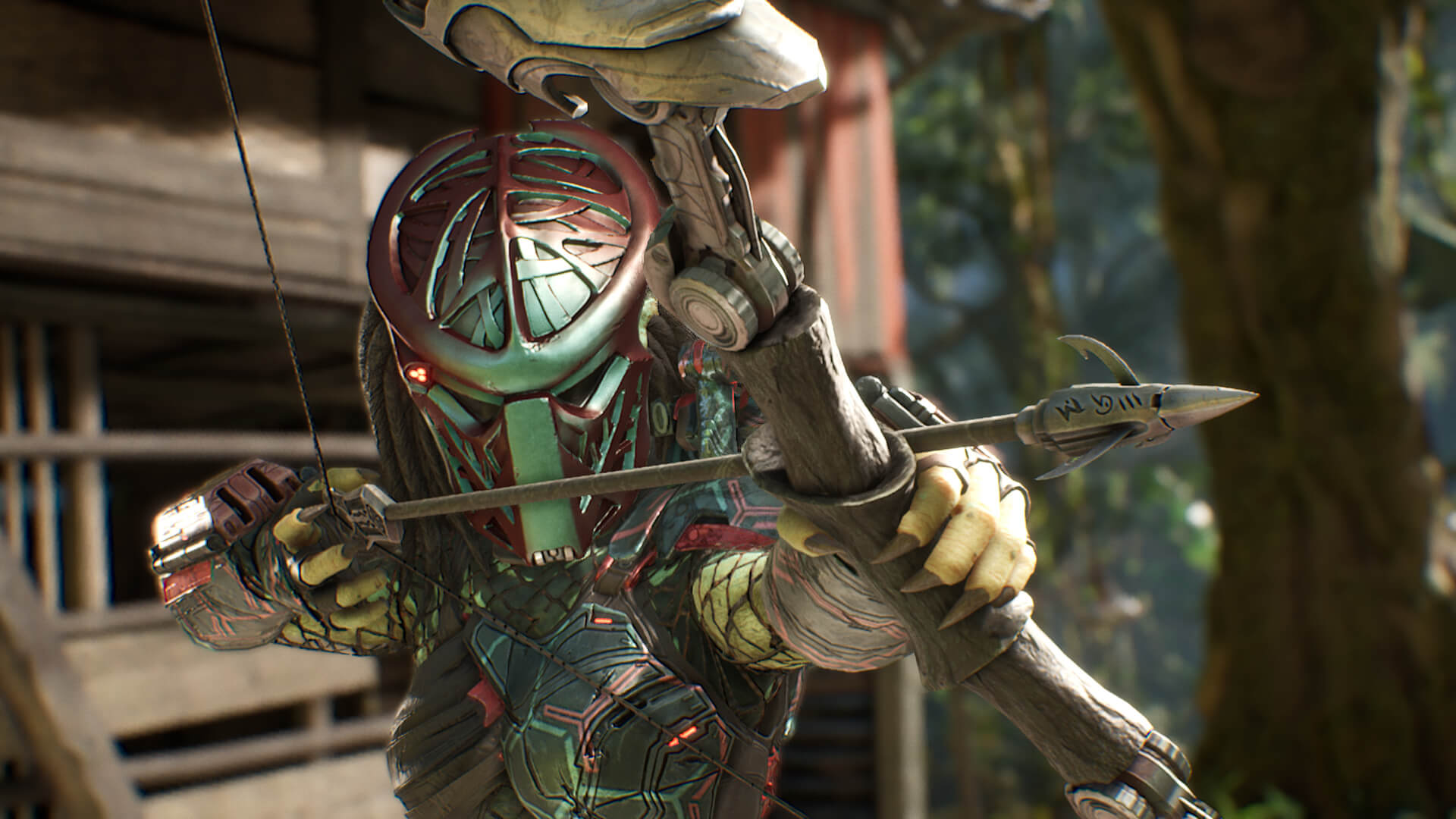 I was really hoping that this game would make me feel like a “goddamned sexual Tyrannosaurus” but unfortunately I’m sure Jesse Ventura’s character would compare it to a wildly politically incorrect and anachronistic slur instead.

For what it’s worth there is enjoyment to be found here but it only lasts for a few hours and then you’re set for a tedious grind if you hope to unlock that cool facemask or beret; the gameplay loop just isn’t compelling enough and there isn’t anywhere enough content here to retain a fanbase with any real kind of longevity.

It’s a shame, because I personally think that the first Predator film is a masterpiece and the following sequels and various expansions to the lore have always been a guilty pleasure, so I came to Predator: Hunting Grounds really wanting to give it a fair suck of the sav but, in addition to lacking gameplay content, the game is, to quote Schwarzenegger’s Dutch (who is coming in an imminent DLC) “One ugly Motherfucker”.

Grab it on discount if you’re curious but this is one hunting expedition that it might be prudent to sit out. 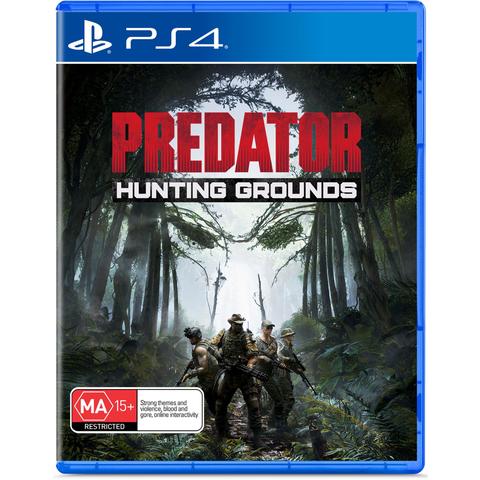