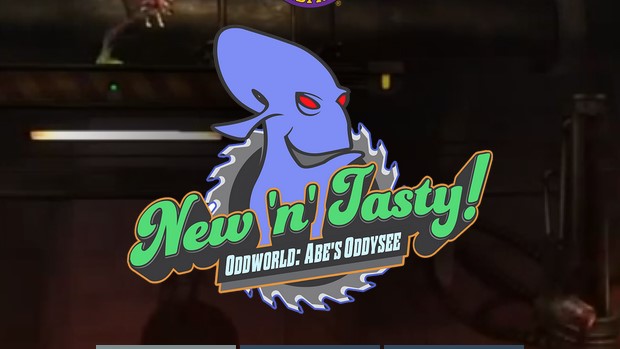 Summary: Fun, frustrating and funny in equal measure, Oddworld: New and Tasty will give you 6-8 hours of solid gaming, even more if you’re committed to saving all 299 of your enslaved brethren, and the level design and puzzles hold up quite well to today’s standards.

I remember the first time I stumbled across Abe’s Oddysee, the first Oddworld game, was when I had purchased a Playstation and was excitedly going through the selection of playable games available on the demo disc that was packaged with the console.

I was immediately grabbed by the unique – and kind of gross – art style and the main character, a grubby little green dude clad only in a loincloth with his mouth sewn together and the ability to fart on command, much to the amusement of his gaggle of followers. 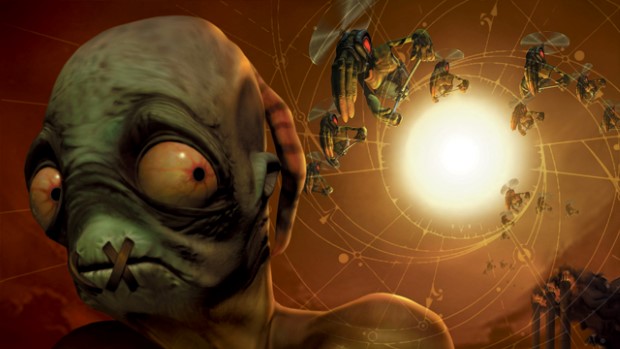 The demo showcased the game’s deft balancing of platforming action and mind bending puzzles, inspiring me to go out and purchase the full version of the game, as well as the sequel Abe’s Exoddus, and immerse myself into the bizarre, anti-corporate worldview of the titular hero for hours upon end.

Now, 17 years later (And doesn’t typing that make me feel old!) Abe’s Oddysee has been built from the ground up using the Unity engine rather than merely giving the original game a minor graphical overhaul and christened with a new title – “Oddworld: New and Tasty.” 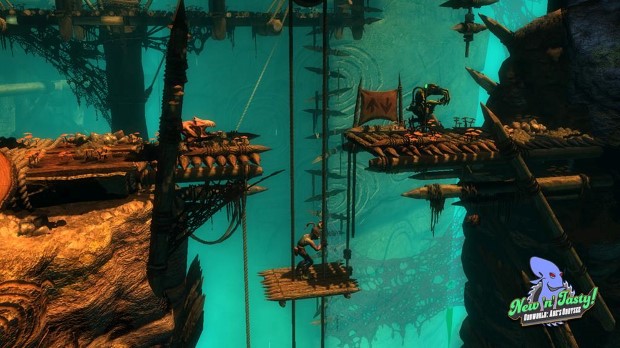 The game introduces us to Abe, a lowly Mudokon worker in the meat packing factory Rupture Farm, who stumbles across a private meeting held between the overseers of the corporation – The cigar chomping, seemingly armless Glukkons (The final sequence of the game will show that the antagonists aren’t actually bereft of arms but merely have disproportionate limbs).

Facing financial ruin due to the main ingredients of their best selling item, Meech Munchies, going extinct, the Glukkons have a brilliant idea to restore the business back to its former glory – By using the ample supply of fresh meat provided by their enslaved Mudokon workforce. 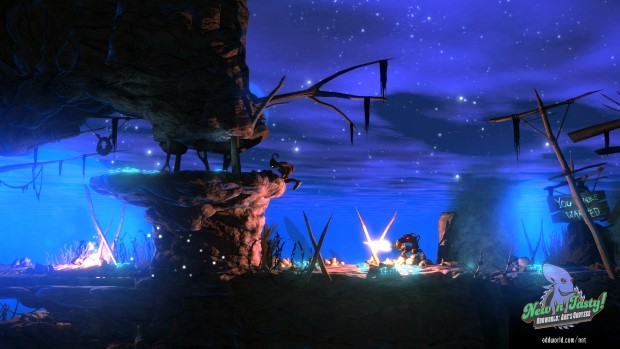 Abe overhears this fiendish plan and quickly endeavours to escape the facility, choosing to either save or doom his 299 fellow workers in the process, 200 more than in Abe’s Oddysee. How successful Abe is at rescuing his compadres will eventually dictate which ending of the game you’ll receive, so it’s in your best interest to search every nook and cranny for any hidden slaves to liberate.

The basic premise of the game features Abe traversing the charmingly rendered wilds and factories of Oddworld, venturing into the depths of long forgotten temples in order to obtain the power to finally bring down Rupture Farms. Unlike the original game each area streams seamlessly rather than being comprised of a series of interconnected individual screens, adding an extra dimension to how you tackle the ingenious environmental puzzles. 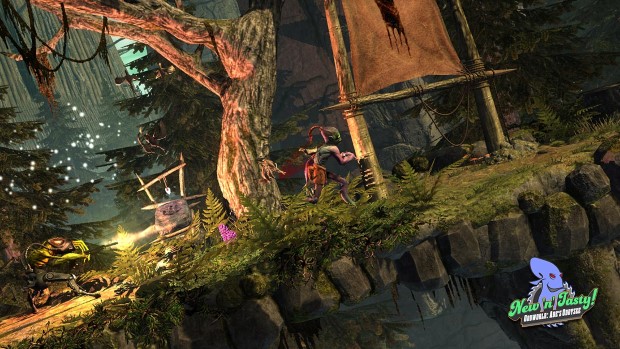 Abe himself isn’t your regular video game hero; in fact, he’s a downright weakling when compared to your Master Chiefs or Nathan Drakes. Oddworld: New and Tasty instead demands that you use your wits to defeat your enemies – The heavily armed, robotic legged Sligs and their subservient attack dogs Slogs – Through a mixture of stealth, using the environment to injure them or by using your chanting power to possess an unlucky opponent and using his weaponry to quickly clear the area.

This chanting ability becomes Abe’s greatest attribute throughout the game, as it’s used to possess enemies, open doorways for either Abe or saved Mudokons to use, explode nearby mines in the immediate vicinity using Spirit Rings and to eventually transform Abe into an overpowered beast after obtaining two hand scars and harnessing the power of two other endangered species, the Scrabs and the Spider-like Paramites. 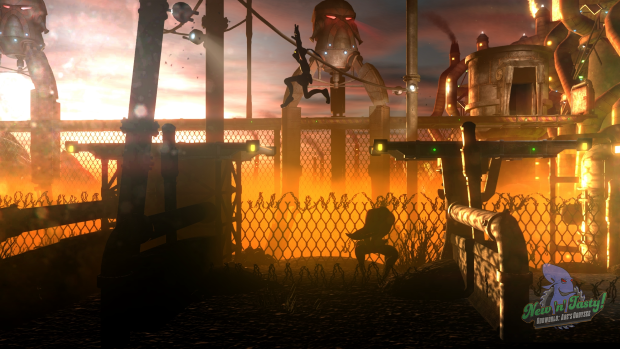 The areas are lovingly designed and make full use of the processing power of the unity engine, with the camera actually panning and zooming rather than remaining static as in the original release. The controls are responsive and easy to memorise, although there are areas of the game where you’ll miss something important due to not being shown a certain action until later in the game; this wouldn’t be such an issue if it was possible to backtrack to previous areas but, in one major case, you can quite easily lose fifty Mudokons due to unknowingly progressing to the next area and being unaware of how to access the countless secret levels in the game.

Another small issue with the game is in regards to the controls – While competently used for the most part, jumping between landmines and other obstacles can soon become a hair pulling exercise in frustration due to Abe’s tendency to shuffle forward a step before leaping, often directly into a mine. 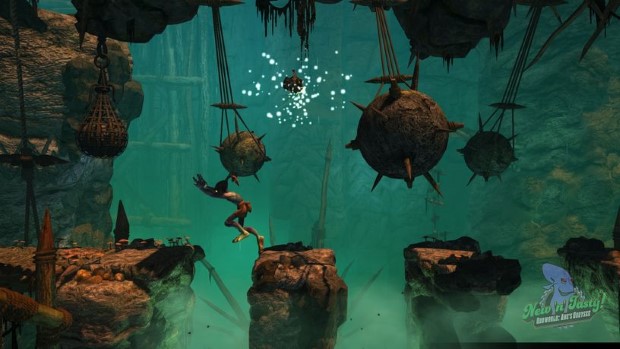 The same issue can arise when attempting to defuse flashing mines by timing your interaction with them; you can often shuffle up to the mine, wait for the right moment to slap your hand down to deactivate them and press the button only to find that Abe instead crouches next to it and inadvertently sets off an explosion.

For some the slightly clunky controls may be an anachronistic remnant of the PSX days of gaming and the stiff leaping controls can be a sore point, but the rest of the control scheme has been overhauled quite nicely, with the ability to actually direct the trajectory of a grenade or bottle cap toss warmly welcomed. 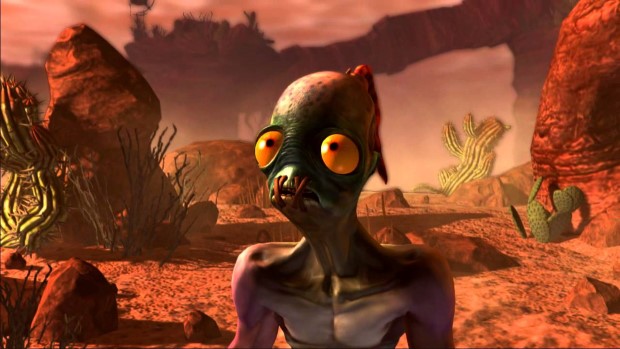 Seeing the environments of Oddworld rendered in high definition is truly a sight to behold for an old fan of the series such as myself. Just Add Water have lovingly restored each environment and packed the flora and fauna full of so much detail that each grotesquely designed character positively jumps off the screen and each area is positively brimming with character.

The sound design is also quite accomplished, with appropriately moody and ethereal music playing as you traverse through areas brimming with the chatter of enemies, the pulsing rhythmic clanking of industrial meat grinders and the braying call of motion activated alarms going off. 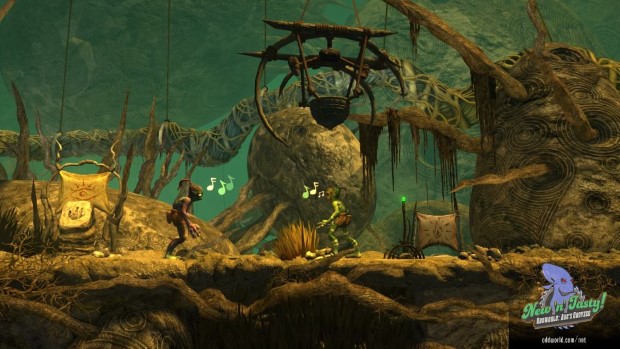 A major part of gameplay is Oddworld: New and Tasty’s Gamespeak system where the player uses the D-Pad to issue commands to Mudokons and, by holding R2, also has the ability to repeat simple musical passwords required to progress, including the much loved fart ability.

The sound and visual design is exceptional considering the small budget of the title and really serve to drag you into seeing the world through Abe’s eyes in a way in which we could only dream when the game first debuted on the Playstation. 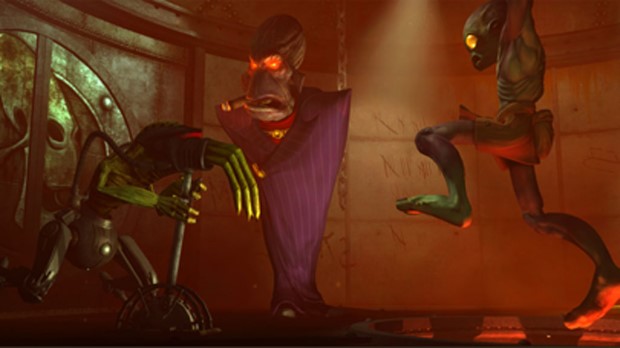 Oddworld: New and Tasty is a painstakingly rebuilt example of how to breathe life back into beloved games. The game’s satirical anti-capitalism message is still as relevant today and the dark and twisted humour and distinctive visual design serves to set the game apart from its contemporaries.

For all that it gets right, however, there are a few areas where the game could have benefitted from extra attention, such as the stiff jumping controls; there were also some annoying glitches present, such as getting trapped in a cycle of instantly dying upon regeneration due to activating an electrical field, a few instances of stuttering animation, dying whilst possessing another creature and having to restart due to the game not acknowledging you’re dead and, most annoyingly, the game inexplicably teleporting you back to an earlier point in the level when you try to pull a switch or activate a password stone. 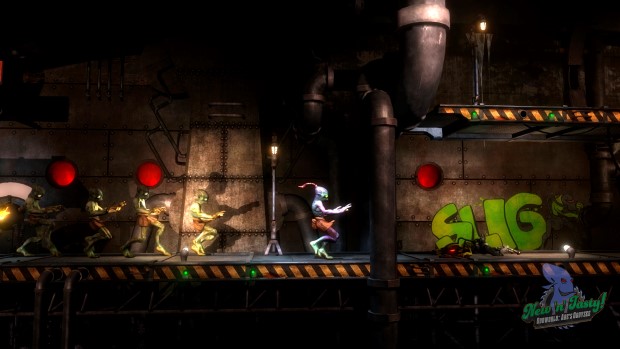 Just Add Water are aware of these issues and have been hard at work on a patch to rectify them, so hopefully they will be a moot point soon, but it is a bit deflating having to restart due to a flaw in the programming; thankfully the presence of a quicksave function activated by tapping the touchpad serves to alleviate most of these issue, and the game has liberal checkpoints if you’re averse to using quicksave for some reason.

Fun, frustrating and funny in equal measure, Oddworld: New and Tasty will give you 6-8 hours of solid gaming, even more if you’re committed to saving all 299 of your enslaved brethren, and the level design and puzzles hold up quite well to today’s standards.