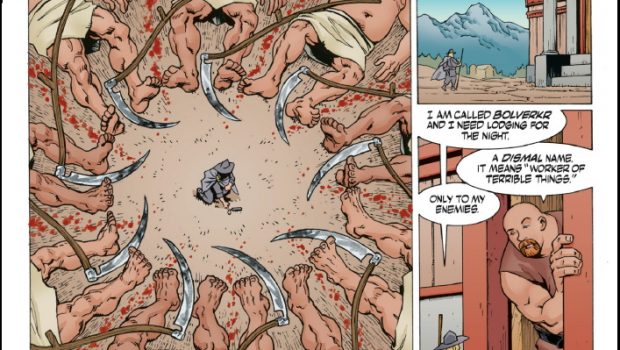 Summary: I would recommend this one if you are a fan of Neil Gaiman and the artist involved. Not really related to Thor, Odin and Loki in Marvel except for the names.

The story about how the blood of the God came to inspire poetry is shown from Norse folklore. Who knew poetry had such a violent origin? The poetry slams I have taken photos at could have been improved by actual body slams and the promoter would agree with me on that one.

The Norse Gods are shown in this one but are not really the same as the ones that appear in the Marvel universe much like the previous story in this series they only share the name.

I thought the artwork was interesting and it is hard to do something really original as a lot of this area has been covered a lot already. Really original fantasy is actually hard to do, it is always based on something and the Norse legends are some of the oldest in Europe.

Norse culture has an influence on a lot of other cultures so it is good to see where the stories originally came from.

I would recommend this one if you are a fan of Neil Gaiman and the artist involved. It is not really related to his other work apart from his existing work on Norse Gods as this seems to be a new project.

Well worth a look if you are interested in folk tales and stories of Norse Gods.