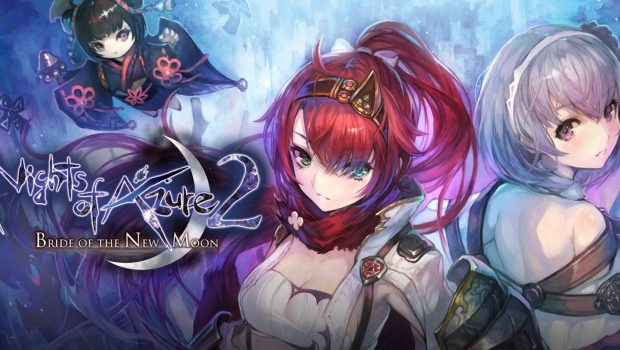 Nights of Azure 2: Bride of the New Moon PS4 Review

Summary: A below-average Japanese hack 'n slash with repetitive combat and an over-reliance on fan-service and titillation to carry players through its cliche story and several cringe-worthy character interactions.

Nights of Azure 2: Bride of the New Moon is a fantasy action role-playing game from Gust, the makers of the bright and light-hearted Atelier series. As a mostly standalone sequel to the relatively niche 2015 Nights of Azure, it’s full of the same real-time hack ‘n slash combat and typical anime tropes and visuals that fans of the genre come to expect – but not much else in terms of substantial improvements or more interesting stories to tell.

Bride of the New Moon is set hundreds of years after the cataclysmic events of the original game: The Nightlord was vanquished but the infectious remnants of his blue blood continue to plague the world and turn unlucky beings into fiends, the enemies of the game that prey upon humanity whenever darkness falls. The playable protagonist is Aluche, a Holy Knight of the Curia assigned to escort her friend Liliana, a priestess of New Curia, to be served up as a sacrificial offering. Rounding out the main cast is Ruenheid, a swordswoman and Warrior of Light destined to save the world.

As the ‘Bride of Time’, Liliana’s life is believed to be needed to stop the newest threat to the world, the all-powerful Moon Queen. Aluche is conflicted to aid in the death of her childhood friend and learns of the opposing beliefs of the Lourdes Order, who say Liliana’s sacrifice will only plunge the world into eternal night. Aluche ultimately defies the orders of the New Curia and suffers a near mortal wound, re-awakening as a half-demon after an experimental treatment involving blue blood is used to revive her. With Liliana out on her own, the story kicks off with Aluche chasing after her old friend.

The story of Nights of Azure 2 is about what you expect from a heavily fan-service-based anime action JRPG. It’s blatantly a yuri game, meant to focus on the sexuality and romance between its exclusively all-female cast members; its melodramatic story is literally full of wide-eyed, busty beauties and all the other usual cliches and tropes that are associated with the genre – gratitous camera angles, swimming pool scenes, unlockable skimpy swimsuit costumes, crazy combos and flashy animations, etc. 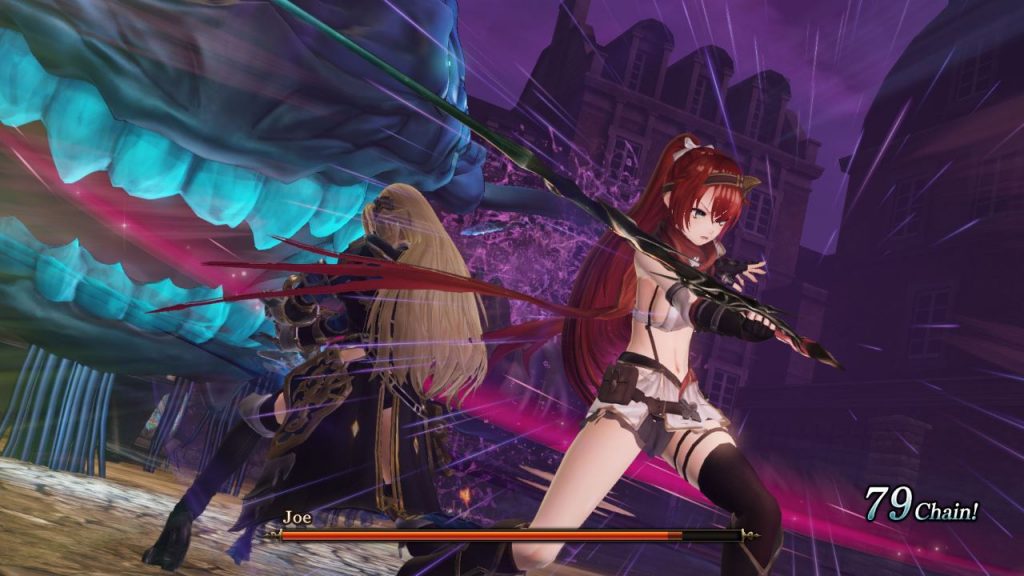 As a player somewhat familiar with Gusts’s past work, the plot, characters and many fan fiction-esque factions and terminology didn’t necessarily click with me here, but I can understand the appeal it would have with a very specific subset of gamers. For myself, Aluche felt like a very irritating lead to play as, given the writers made her aloof and unaware of her childhood friend’s very obvious romantic inclinations to the point of absurdity. The dialogue was also so repetitive or bad at times that I struggled to get through to the next combat section without taking a break between the cringe-worthy cutscenes.

Speaking of combat, fighting in Nights of Azure 2: Bride of the New Moon involves real-time, fast and frantic action-based battles with a variety of mechanics (and attached tutorials) to play around with. It’s mostly standard hack ‘n slash combat, with combo chaining, dodge rolls, parries, and special moves (team up strikes, ultimates) that can be pulled off in conjunction with party members for more devastating damage and crowd control. The general approach reminded me of the Tales of games initially, but much less smooth and with heavy emphasis on constant titillation to distract players from the mediocrity. Button-mashing often was the quickest way to get through several battles,

Throughout the game, several other female companions will join your party to help you clear quests, called ‘Lilies’ and ‘Sevans’ in-game, each with their own distinct fighting styles, weapons and team up strikes to combine with Aluche. They also have unique skills, both active and passive, that trigger during combat and change things up for some added spice to the battle formula. During battle, they are controlled with the D-Pad, which gives limited instructions to the A.I. as to their current attack pattern. You can also clear side quests to strengthen your bond with the Lilies and learn their backstory, and your affinity meter/ relationship with each alters the ending slightly.

The game’s main story and side quests are split into several linear chapters, with a curious emphasis on lunar cycles and time limits which may or may not put off a lot of players. A hotel named Eternia acting as the ‘ hub’ or base of operations for players to interact with Aluche’s many companions, as well as a place to spend the blue blood she collects from defeated fiends and convert it into skill points to spend on character attributes such as increased health points or increased status affliction. Venturing out to to explore the many dungeons and other areas on the world map (creepy forests, decrepit mines and ruined cities) puts up a visible timer to work around, and you need to complete all main and side objectives as well as the boss of the area before time’s up, otherwise it’s game over – and you have to restart the chapter. 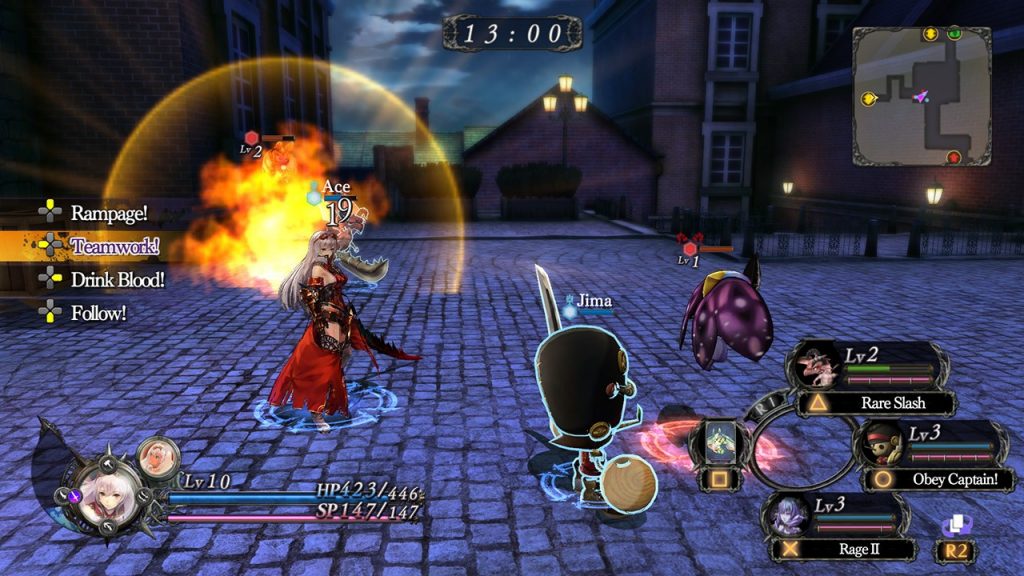 The timed-nature of each chapter is certainly something that will divide returning fans and new players. It limits the amount of free exploration and leisure the player has, and specific planning is required to maximise your potential to complete as many quests and bonding sessions with Lilies as possible. It’s clear the developers went down this route to encourage multiple playthroughs, but for gamers like myself to like to experience as much of the content as possible in one playthrough, it is a bit of a downer.

Night of Azure 2 will appeal to returning fans and anyone who enjoys the doe-eyed, grimdark-but-not-really anime aesthetic, but there’s no huge jump in overall fidelity here from the first game. The Western European, 19th century setting sometimes produces some interesting environments and enemy designs, but texture quality is generally a lot lower than comparable games in the genre. Reviewing the title on PlayStation 4, the game suffers frequent frame-rate drips below 30fps along with recurring stuttering which definitely did not help me through the already repetitive slog several sections of the game had in spades.

Nights of Azure 2: Bride of the New Moon is a below-average hack ‘n slash action JRPG that will likely only appeal to those gamers who love Gust’s previous work or excessive fan-service. It’s not exactly a train-wreck, but its basic combat loop grows repetitive very fast, its all-female cast is grating (the script is generally terrible) and the story, while possessing a few genuinely interesting details here or there, relies too heavily on anime tropes and titillation to carry it through – and even then you can find such entertainment elsewhere, done much better.