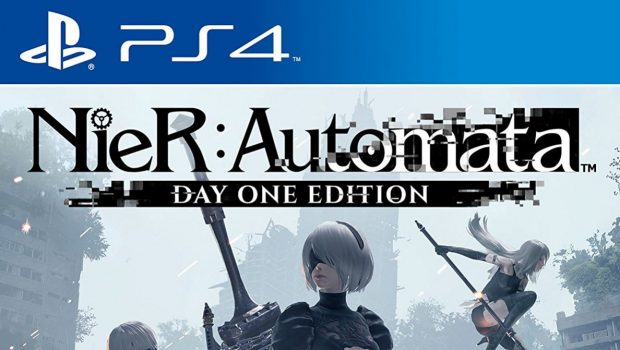 What do you get if you mix Metal Gear Solid with Terminator by way of Mars Attacks and throw in a pinch of provocative goth mistress… the answer is Nier: Automata.

The game opens with you piloting your flight suit in formation with your team mates… as you are granted control you start getting the hang of it and one of your team is shot from the air… more combat and another team mate falls… eventually you are the only one left and a change to flying robot and back again you finally touch down and fight in human(oid) form. With your drone hovering nearby you take out wave after wave of basic robots (they look a little like windup toys). But this has just been the entree… a large portion of the building you have been fighting on suddenly lifts out of the water and presents it’s true self as a giant deadly robot. After a devastating battle that takes down the mechanical titan, and it would seem yourself… you find yourself on an orbital platform where you learn your conscious has been transferred to a new body… because all this time you are simply an android… an android made to look like a hormonally charged anime fans wildest dream. 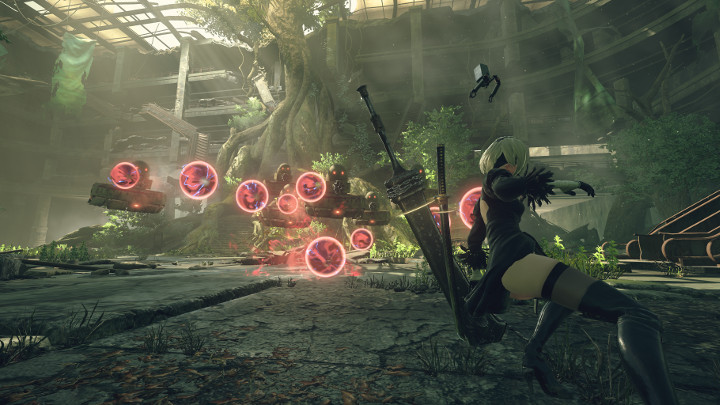 But this is indeed just the beginning… you learn that Earth was attacked and the alien invaders have left robots all over the planet to mop up and finish the job. Humans escaped to the moon and set up orbital stations and are now making their fight back… which primarily comprises of androids with extreme firepower and a determination to get some payback. The game is actually a sequel to the former title Nier which was itself a spinoff of the Drakengard games but prior knowledge of those titles is not essential to enjoying this game.

Your primary communication while “working” is through your communication link which is where that Square Enix/Metal Gear element comes in (Square Enix being the developer for both titles), the little chirp as a message comes in took me straight back to the old Playstation Metal Gear days and I’m sure it’s exactly the same sound sample. While you are briefed from afar… it doesn’t take long for you to gain a mission companion in the form of 9S who seems to play essentially the more “human” personality to your own straight forward, keep on task attitude. 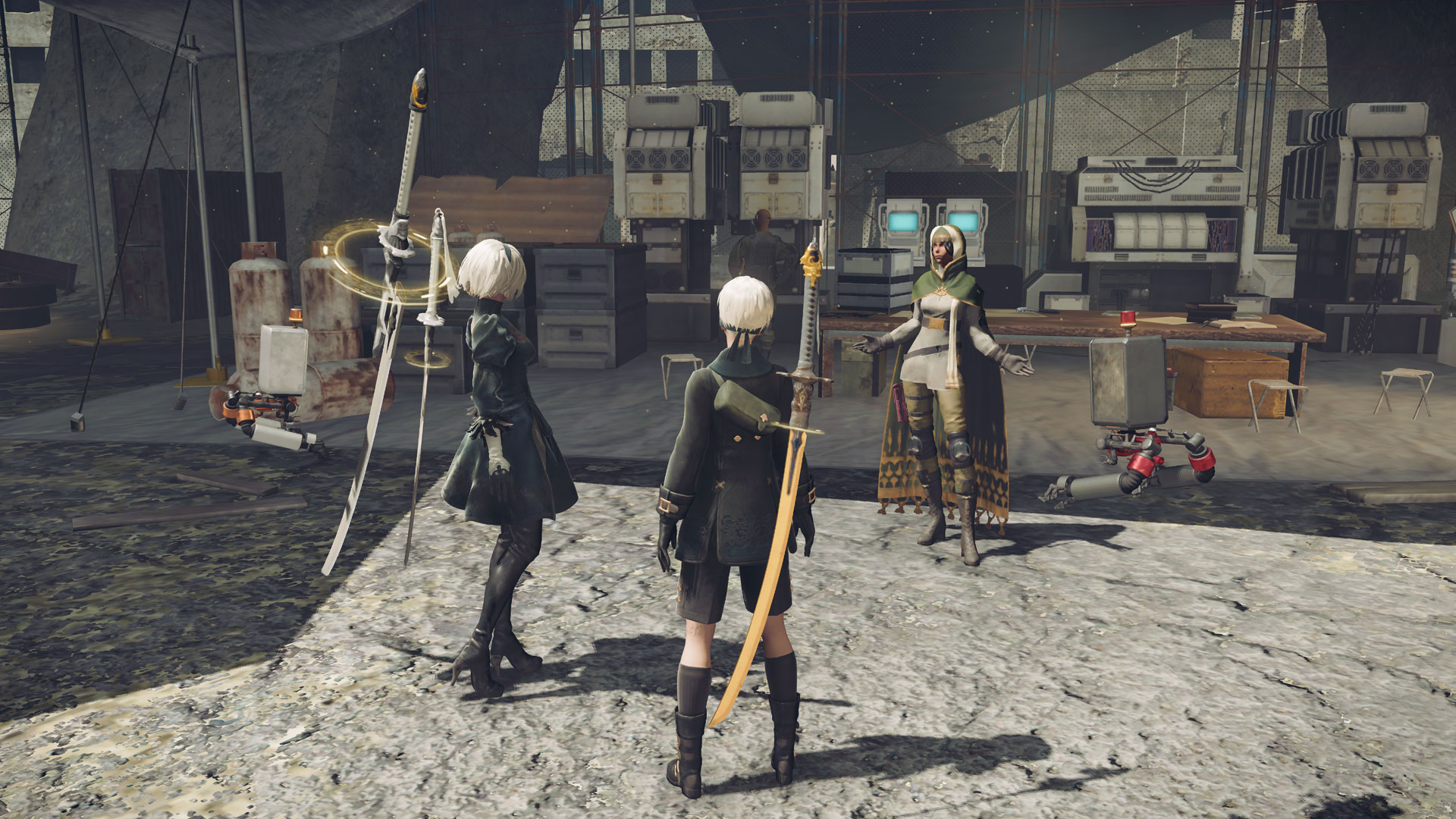 The game world is quite impressive, from the aforementioned oil platform to ruined cities, desert landscapes and more… there’s a real sense of scope to it all. It’s quite interesting standing on the top of a crumbling building and having your fellow android muse on the state of the world… the vegetation taking hold once more, birds flying about and a few choice animals wandering around. Speaking of the animals… care to ride a Moose… well you can because… well, why not! 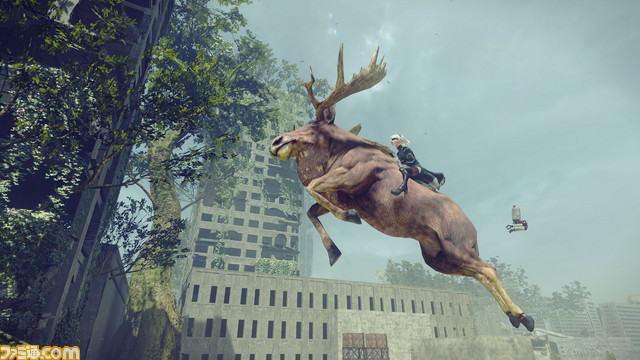 The gameplay is quite easy to get into whilst also giving flexibility to perform some stylish moves. You control your little drone partner who covers your ranged combat primarily but also is useful for fishing… yep, your drone is your fishing buddy! You yourself wield the classic oversized bladed weapons (or variations of) and can string together a number of visually stunning strikes. Whilst it might look fantastic it’s actually easy to string the moves together so it’s not off putting even when you switch between android form and flight suit (which ends up playing in twin stick style). But their is a lot of depth here… not just in the combat and the upgrades, but in the story… 9S does his part to make you think about the whole state of things and provides an element of humanity to the journey and then there are all the other characters you find along the way to fill in those story holes or to simply add more texture to the overall tale of what happened and what is going on. 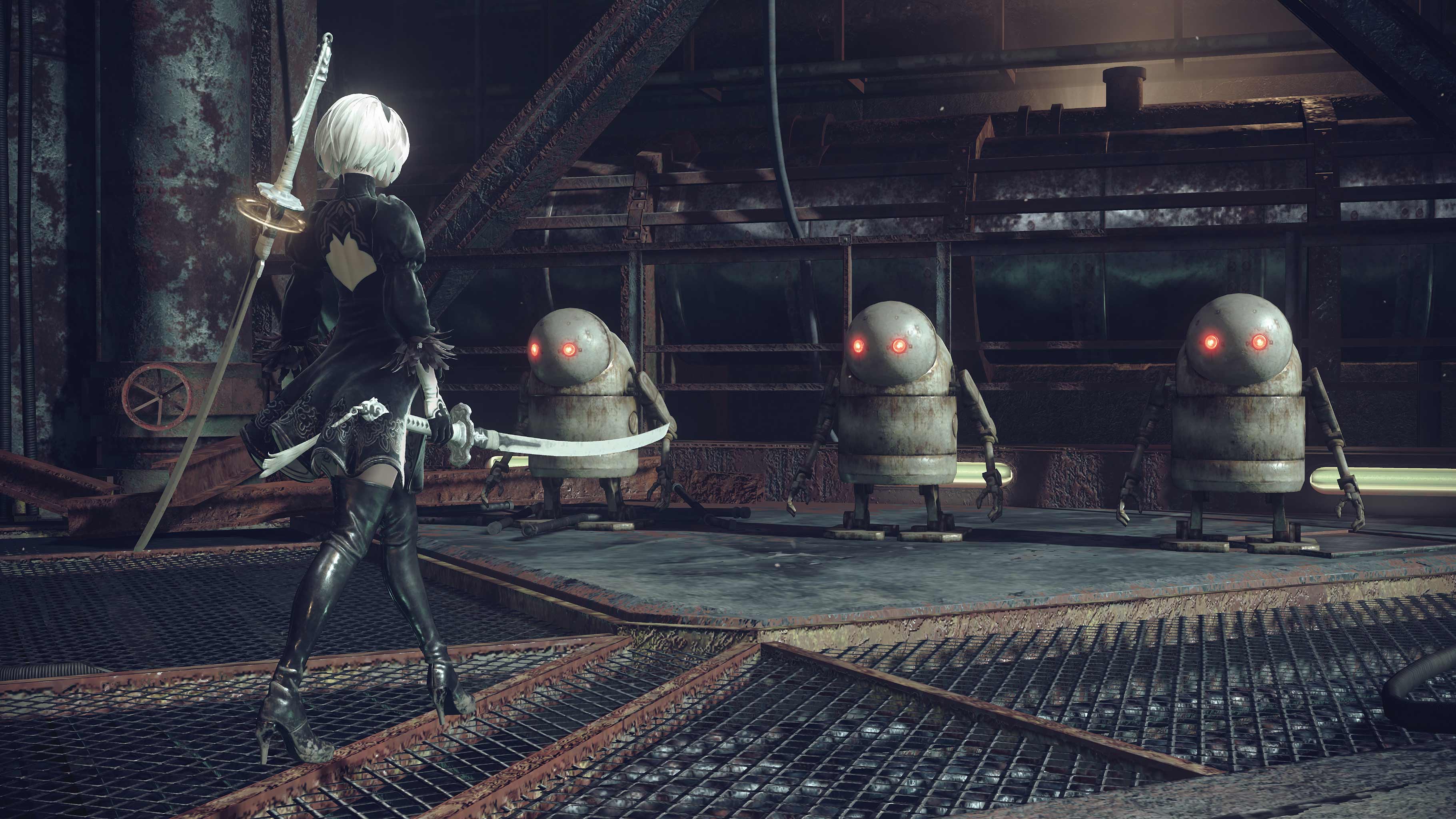 There’s a lot to like about Nier: Automata but it’s really best experienced rather than explained. It’s not daunting to get into but that doesn’t mean it’s simple. With multiple endings and a lot of self referential humour…. it really is a great title to add to your collection.