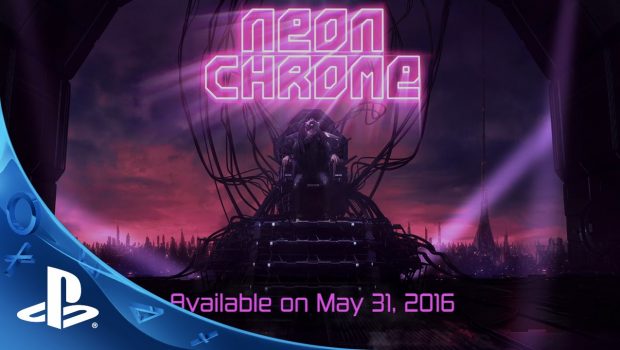 Summary: With a time consuming upgrade system and lack of variation in the levels despite the procedural generation, Neon Chrome is, forgive the obvious pun, ultimately neither bright or polished enough.

Neon Chrome is a cyberpunk inspired top-down rogue-like that has players working their way through procedurally generated levels, gaining items and upgrades that carry over from your inevitable death to be applied to your next character. In this respect it’s similar to games like Rogue Legacy where death is an opportunity to alleviate progression issues by ensuring that the next time you tackle the stages you’ll be better prepared. 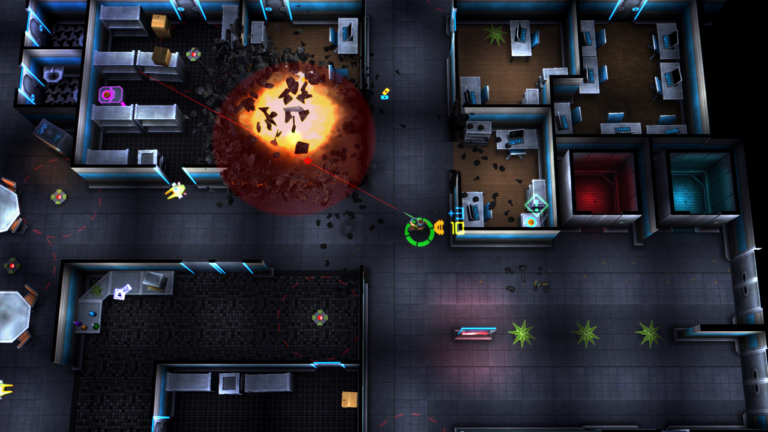 Your main goal is to ascend through the floors of the titular company’s tower to reach the Overseer, using a phalanx of clones with different classes and abilities to perform the task whilst you sit safely behind a computer screen, remotely controlling everything. This central conceit is a nice touch as it gives the game a feasible reason behind the core mechanic of dying, levelling up and jumping back into the fray but unfortunately it’s one of the few areas where the game succeeds.

Each stage will drop your character into a procedurally generated level filled with locked offices, loot to plunder, weapon pickups and upgrade stations, as well as the expected horde of assorted nasties to plough through. 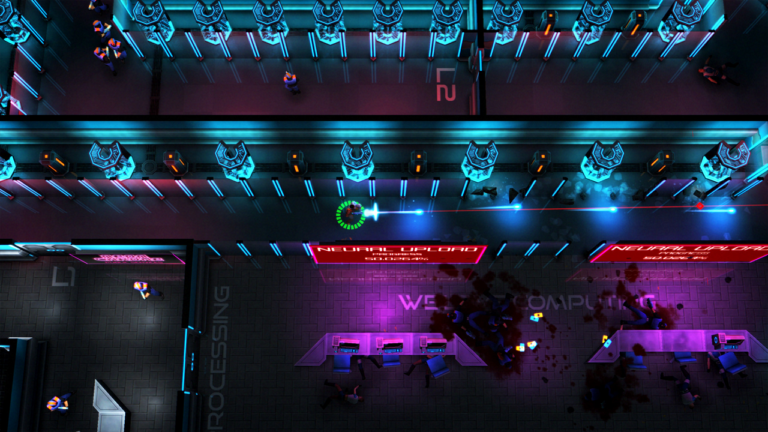 You zip about the place, using one thumbstick to move and the other to aim whilst hammering the attack button in order to clear the area of foes, but the whole thing just feels poorly optimized, with the aiming system so aggravatingly inaccurate that you’ll often land a shot on everything in the immediate vicinity except your intended target. Coupled with the fact that you’re often surrounded by explosive barrels and you’ll soon be tossing your controller at the screen in frustration.

Your attacks lack any real weight or feedback besides a graphic representation of your enemy’s health bar being chipped away and the control scheme just feels clunky to operate; games like Hotline Miami show that tight controls are an integral part of creating an enjoyable top-down shooter and Neon Chrome just doesn’t manage to pull this off, which is detrimental to the experience as a whole. 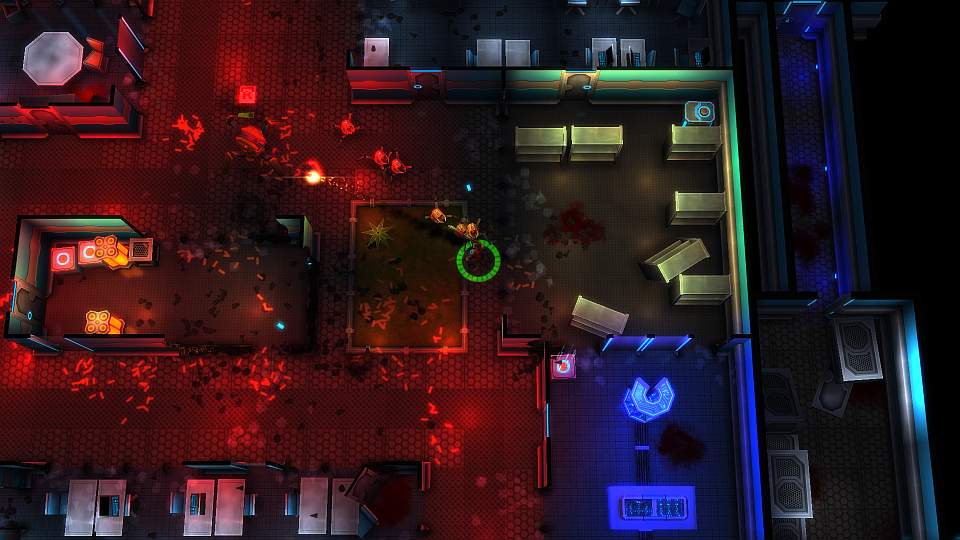 Progression is handled well with the way you can augment your characters abilities and skills using the upgrade stations and skill trees but often you’ll find yourself being forced to select from a series of options that don’t necessarily reflect the areas you wish to focus on, leaving you playing a game that ostensibly offers up a variety of ways to play but ultimately leaves you with only a handful of ways to approach the game.

Initially you’ll find yourself dying frequently but, thanks to the persistent upgrade system, you’ll soon be tearing through each level, feeling more and more capable of tackling the challenges before you with each attempt. 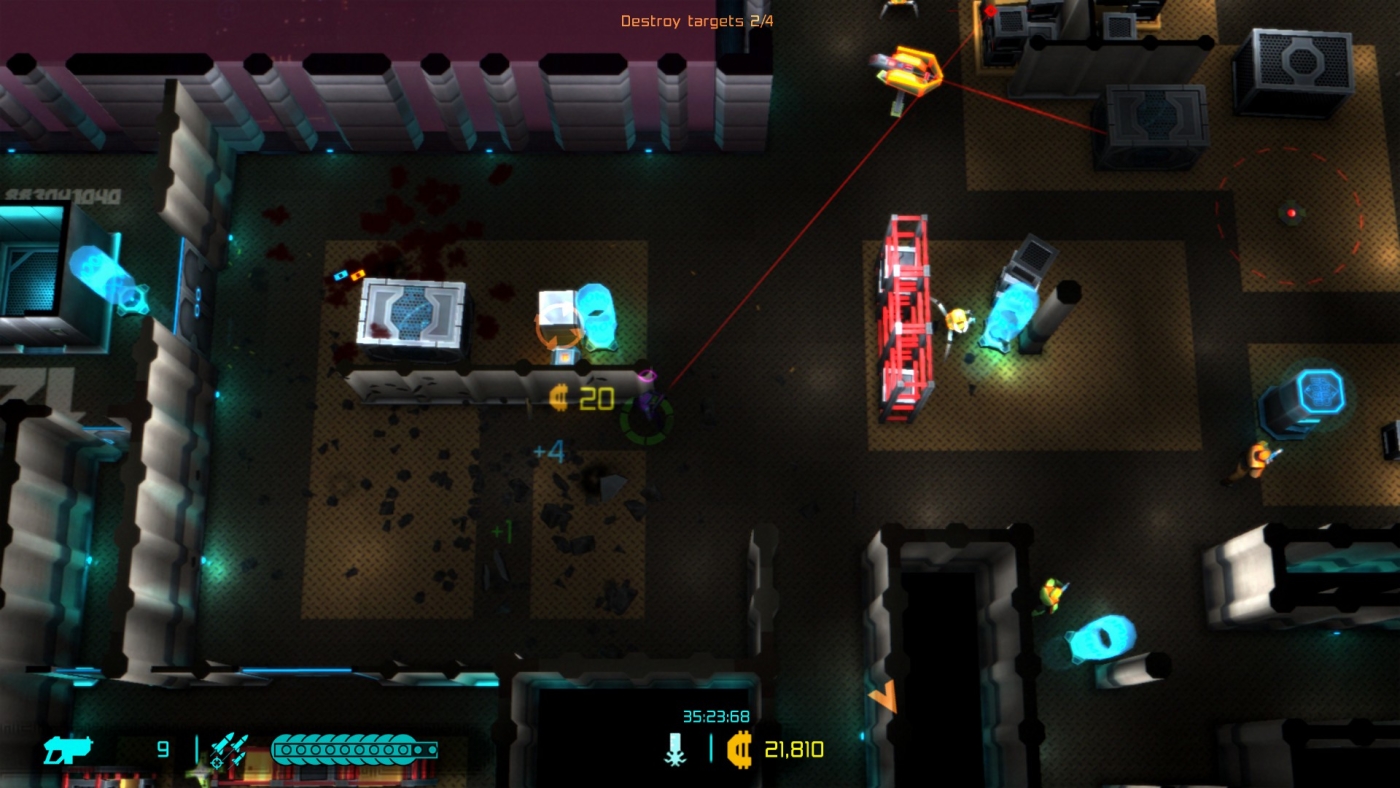 With 20 levels to work through, however, making it to the Overseer can become a long grind that really doesn’t pay off in terms of how much time you’ve invested and sometimes you’ll find a great run suddenly halted by a particularly difficult level, be it due to the level design or enemy placement.

Because of the random nature of the procedural generation, oftentimes the difference between an enjoyable run and a ceaselessly frustrating one comes down to sheer luck of the draw. Chuck in areas that trigger a countdown timer that will send more hordes of enemies your way and the entire game just degenerates into an unrewarding slogfest. 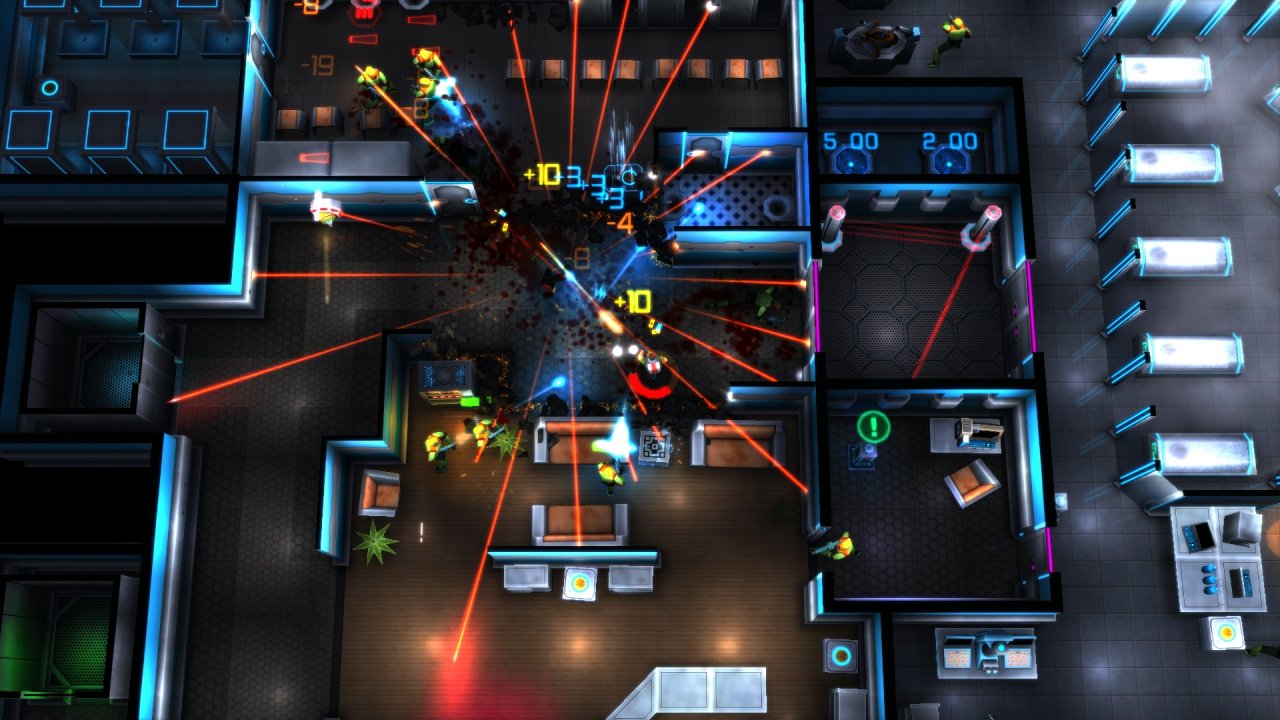 Visually Neon Chrome is, in a word, bland. There’s only a handful of tile sets and the character and enemy designs are uninspired and repeated ad nauseam, with the exception of the bosses you encounter. The garish glow of neon colours that permeate the dreary office levels are a nice touch but unfortunately aren’t enough to dispel the overall cheap feel of the graphics.

Audio is handled competently enough and there’s some decent vocal performances, even if the fact that they’re unskippable can get a bit grating after multiple playthoughs, but these elements aren’t enough to elevate the game above its graphical and gameplay shortcomings. 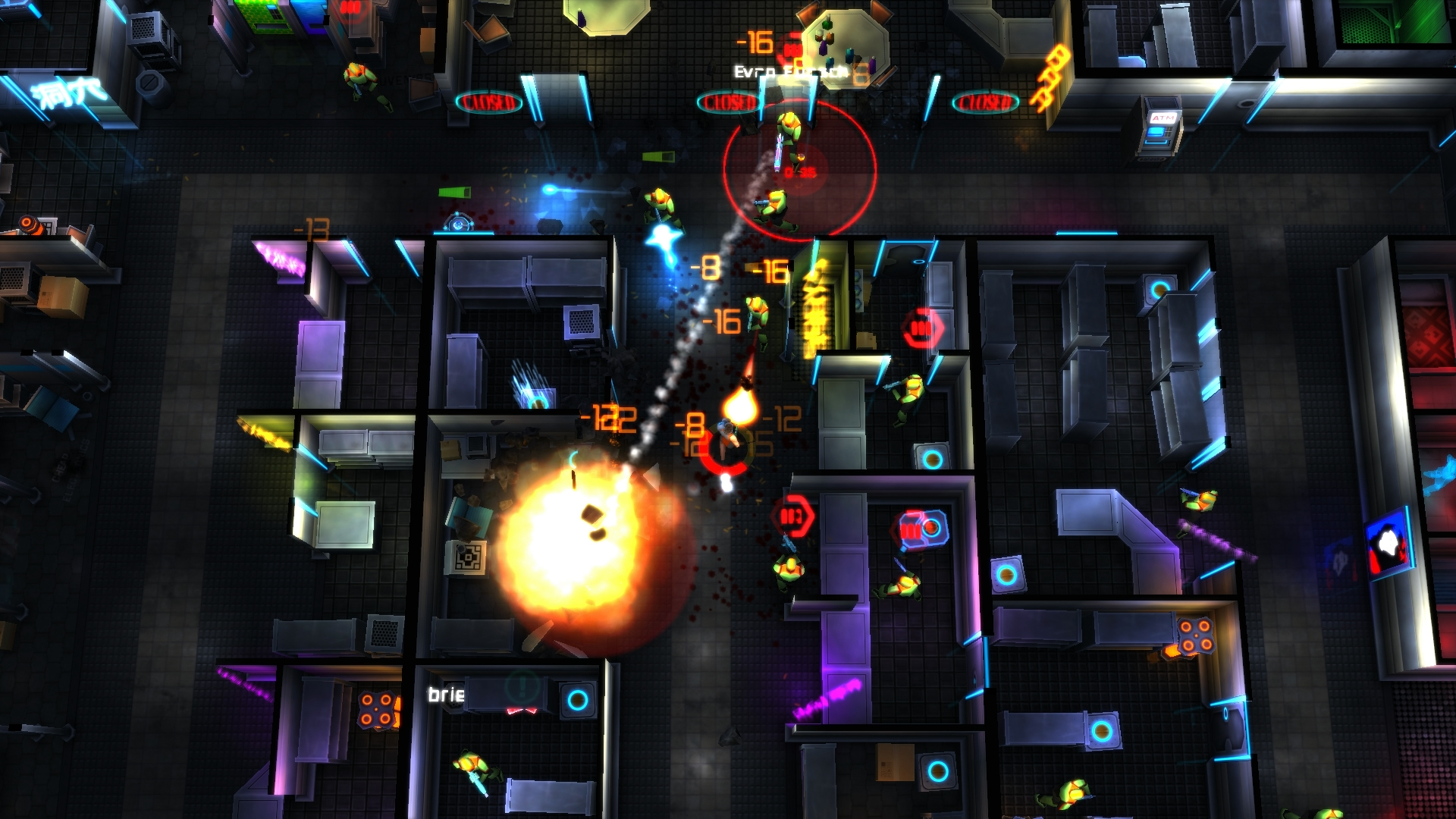 In case it wasn’t obvious, I really didn’t warm to Neon Chrome at all. The eighties inspired aesthetic of the opening cinematic promised big things that the mediocre shoot-em-up that the game ended up being failed to capitalise upon. The controls aren’t as responsive or intuitive as a game like this demands and the lack of refinement in almost every area leaves players with a hollow gaming experience that quickly outwears its welcome. Co-op can make the whole affair slightly more entertaining but only offering local multiplayer and completely disregarding the almost prerequisite online component seems to me to be a massive misstep on the part of developer 10Tons.

With a time consuming upgrade system and lack of variation in the levels despite the procedural generation, Neon Chrome is, forgive the obvious pun, ultimately neither bright or polished enough to be worthy of a look in from anyone but the most dedicated twin thumbstick shooter fan. 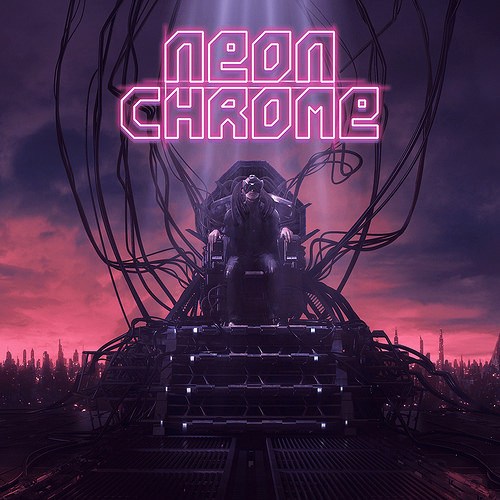