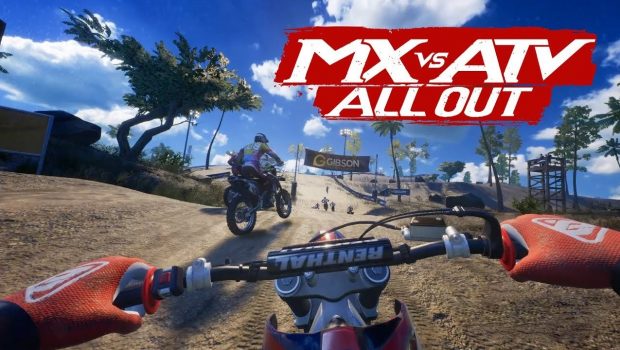 MX vs ATV All Out Anniversary Edition Review

Summary: This game is enjoyable, requires some serious practice to develop your riding skills, and truly does a great job at simulating some of the riding techniques and complexities involved with the jumps, tricks and racing.

This title is the latest instalment from a well-established franchise and is my first introduction to the series. Having never played any previous titles or any titles of this genre on the XBOX before; I can offer a unique fresh eyed perspective.

The game is simple. You are a rider of an off-road motorbike or an all-terrain vehicle, you can race competitively with the AI, 2nd player or online, or against the clock on your own. You can perform some awesome stunts, winning races nets you some “M” Motocoins which you use to upgrade your bike or ATV. 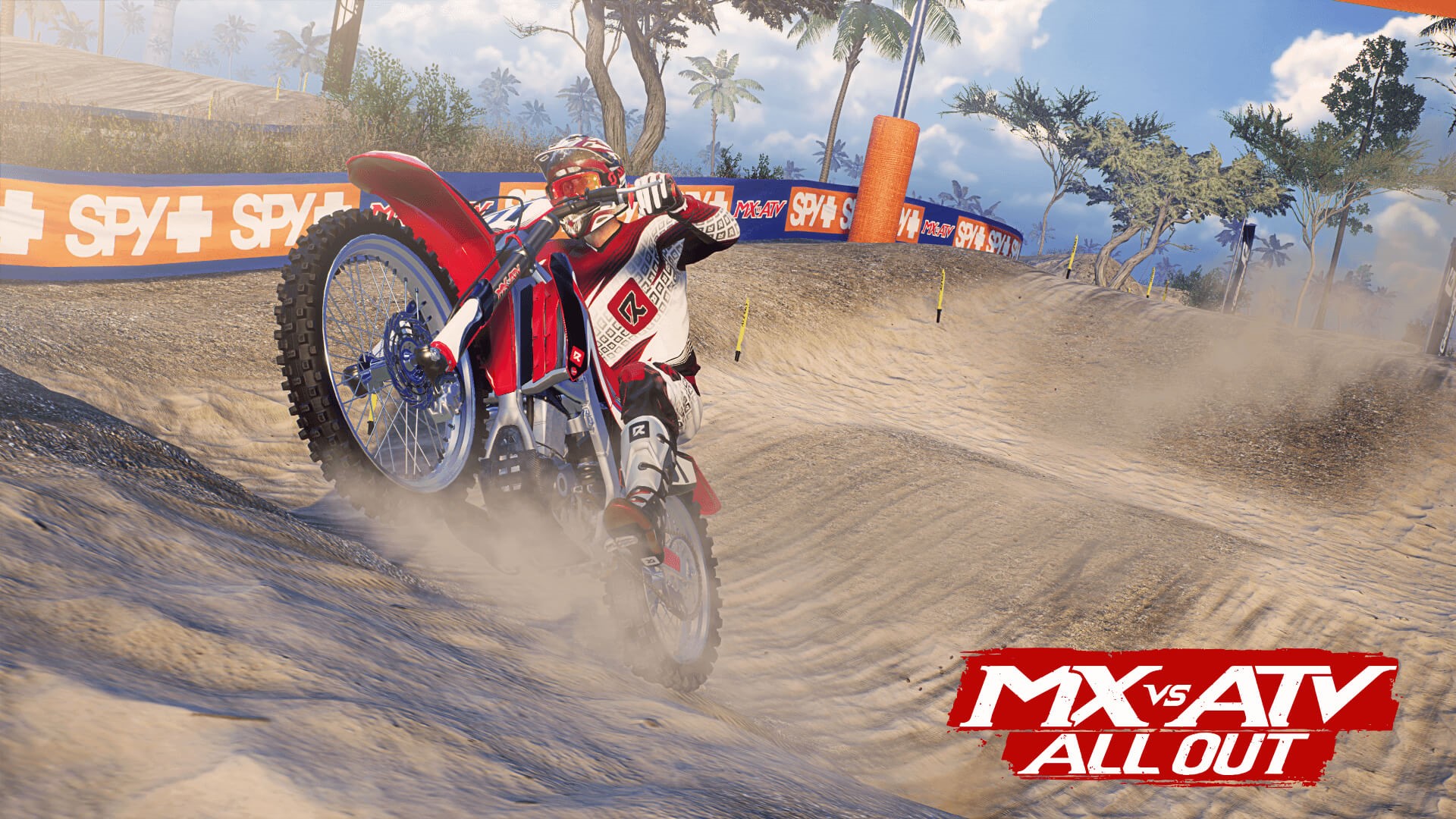 This title has come about after Nordic games acquired the rights through the downfall of the then THQ Digital Pheonix. So the last title in the franchise was in 2014. Without perspective, I cannot say if this title is an improvement from the last, so let’s look at the game purely on its merits.

You start out in what I would call a “Sand Box” environment; it’s your home base. It is extremely well laid out with lots of difference surfaces, jumps and clearly obvious tutorial zones that you can activate by riding over them. If you go exploring you will find a valley with some giant billiard 8 balls, that you can push around with your vehicle, at least a certain amount before they disappear in-front of your wheel and go back to where you found them. 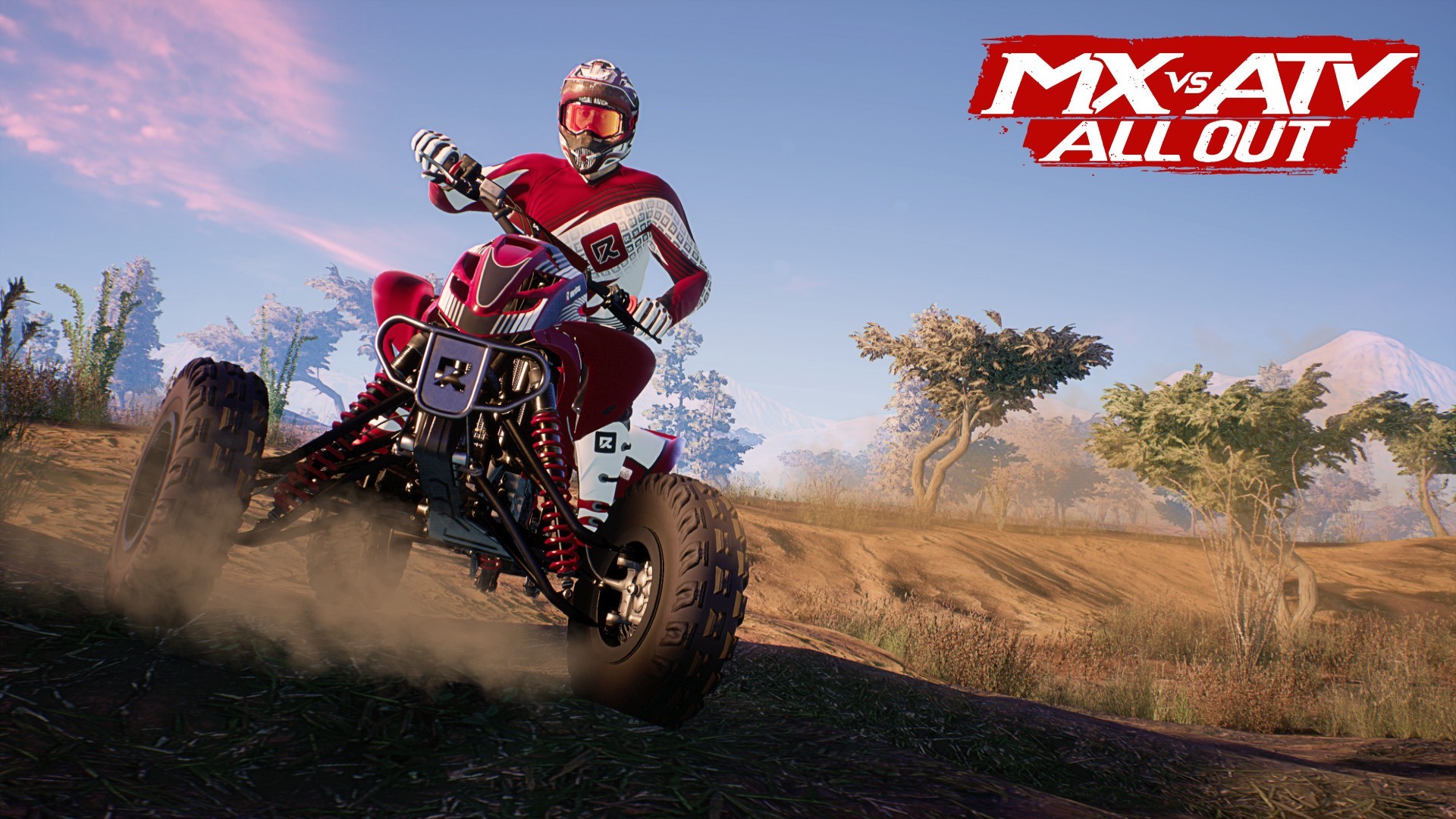 The controls are highly intuitive and demonstrated well to a new player, as is the barrage of tool tips which you learn to ignore after a few minutes. Some of them are useful though; if you are lucky to get one in the context of what you are actually doing. But you are more likely to just plod through it all yourself, its way more fun.

Let’s examine the usual suspects. The graphics is running on the Unreal Engine, so you can expect on par graphics with the many titles that use this engine. The realism of the scenery is for the most part, adequate for the type of game that it is. The textures that the developers have used are in a word, interesting; that is to say there is a stark duality in the level of detail and quality between textures. Although I am not an expert on motorbikes or ATV’s, nor can I spot an inaccurate model of engine or bike part, it would seem that a high level of attention to detail has been implemented for the vehicles. But in stark contrast, you may play the game and see the same tree, over and over, and over, but you may not quite notice that you are seeing it, but if you do, try to ignore it and ride faster! 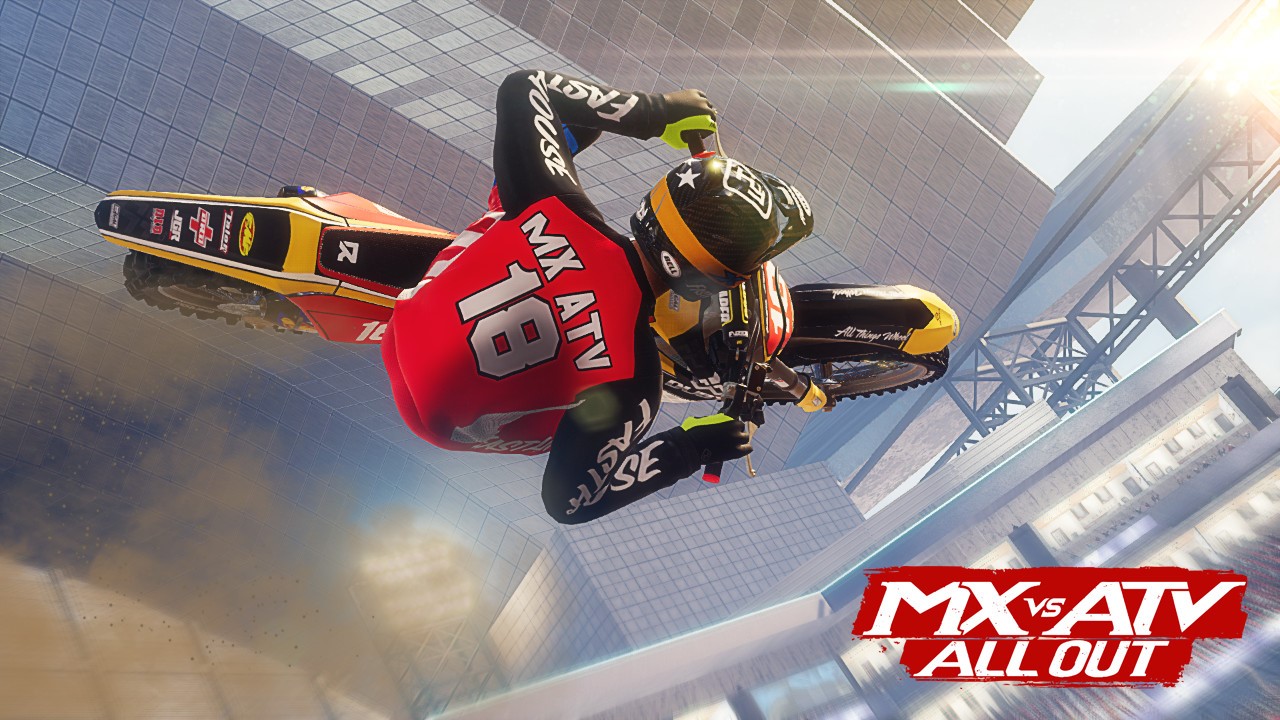 The sound and effects are fine, great quality simulation of the engines, braking, RPM, and well everything. Additionally, there is an inbuilt sound track, strictly one genre of music, no ability to link into your personal media libraries, but you can change tracks during play. Although, play the game for an hour and you will swear you have heard the same song several times.

Looking further, you will see static textures for grooves in the dirt race tracks, embankments and hay stacks, hay bales, road barriers and the like. So at this point, we stop talking about the quality of graphics, which, unless you are extremely picky, you should find acceptable; you then look at the textures and the physics engine in general. And this is where the game really falls short. 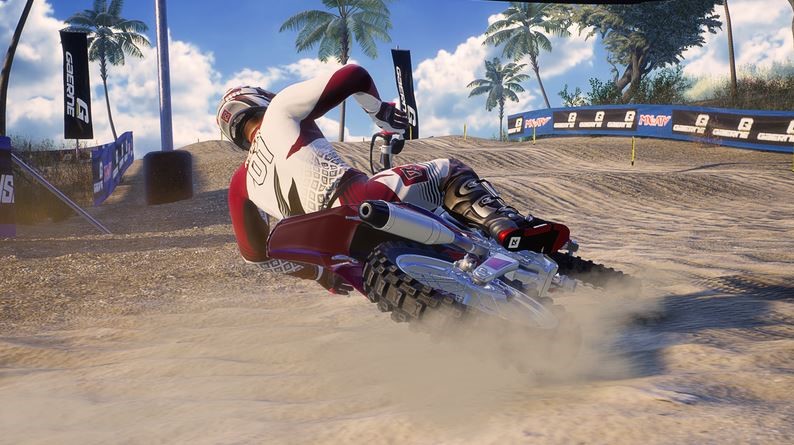 You might expect some level of interaction between your tyres spinning up on the race track to perhaps kick up some dirt, or leave a mark that will be visible until your bike leaves the field of view. Nope. Not really. In fact, if you over steer and hit a side barrier you can skirt clean through to the out of bounds area, and in less than a second watch the displaced barrier magically reappear cutting you off from a speedy exit. You then have little to no choice but to collide with the barrier, usually resulting in a dismount and automatic 5 seconds off the clock, or you could try riding or remaining in the off-track area for more than the arbitrary amount of time, that is never consistent, and be automatically placed rearward of your original position all whilst the clock is running and you now will never have a hope of winning the race.

It is at this point I ask myself, is this a ‘game’ or a ‘simulator’, and if you play this game you might find yourself asking the same thing. From a physics point of view, to a person who has never done jumps before on a bike, it would seem that the riding physics are very close to real life. Bouncing, suspension flexing when hitting hard on the track, landing angles, 360’s it all seems to be realistic. But, running over a rock at lower speeds, which would cause a bit of a stack in real life, probably won’t throw you 10 metres behind your bike, or cause your bike to fly up to the sky the same distance. There are also objects in the game that are of about the same size and weight that if riding a bike into them, one will cause you to stack, fly back, fly up, or sometimes just stop, whereas others like the 8-balls can be manipulated and rolled along. 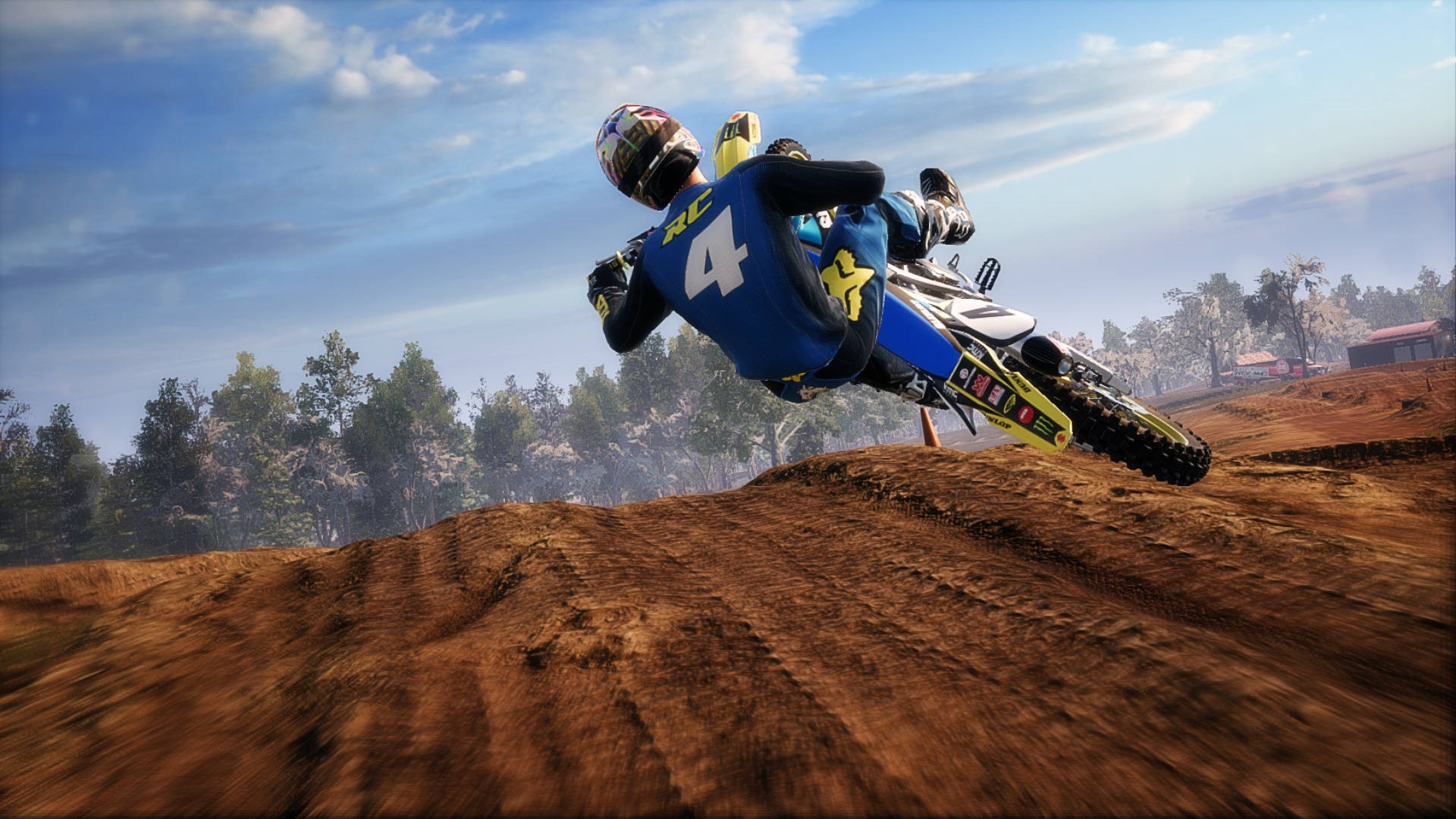 The realism I think comes from the steering controls. You really do have to develop a ‘leaning’ technique; I am yet to master this. Too much and you will stack. Not enough, you will stack. A cat walked passed your neighbour’s house, you will stack. But when you get it right, you seem to appreciate why it’s there. Yet, the single most frustrating and play-limiting issue with the physics, is when you are racing and you do fall off your bike, you go flying as you would at those speeds, you land as you would, there seems to be some kind of half animated epileptic fit, which suddenly stops then you return to a random position, having lost 5 seconds of time. In the sandbox environment, you can press the B button and cut out half of that useless unfinished animation, but during a race, it’s not consistent, but in either case will lose you precious time. I am disappointed that there is no finished animation that allows the rider to pick-up the bike and mount it again, it just seems to break a continuity, although in real life any collision like that is likely to kill you, so there is that too. 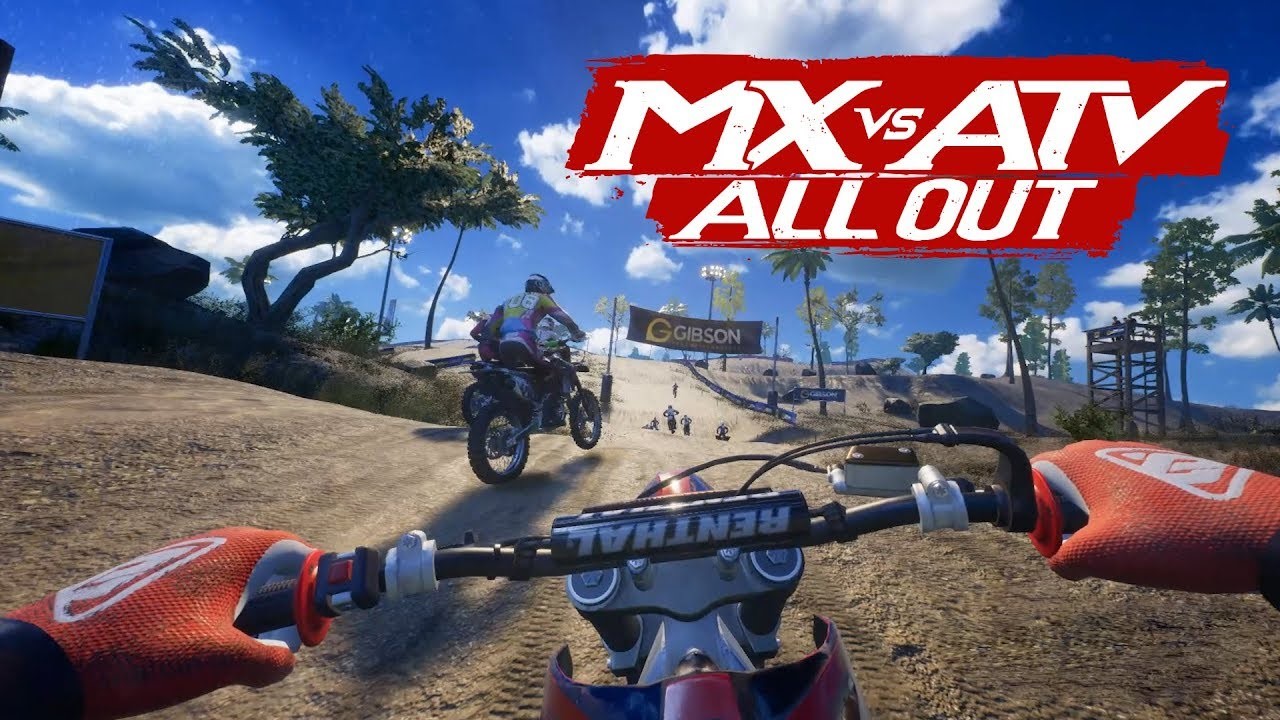 When you do collide with a hard landing, a solid object, a tree or a rock, or the tractor that came out of nowhere (don’t judge!), there is at times some noticeable clipping, rag doll behaviour from the rider and inconsistent physics response. And it isn’t subtle, but it seems to get more erratic with higher velocity crashes. It does detract, but it’s also hilarious too.

The AI riders can also seemingly crash into you from behind, although it does seem to drift you a little bit, it seems to be recoverable. It might take you by surprise when it happens, which isn’t often. I am therefor unsure if that is part of a ‘simulation feature’ or ‘physics bug’. Collision handling seems to be more forgiving with the ATV’s, especially the larger enclosed vehicles. This would make sense as a real life comparison, although it could also be that it’s harder to get decent air with the ATV’s. 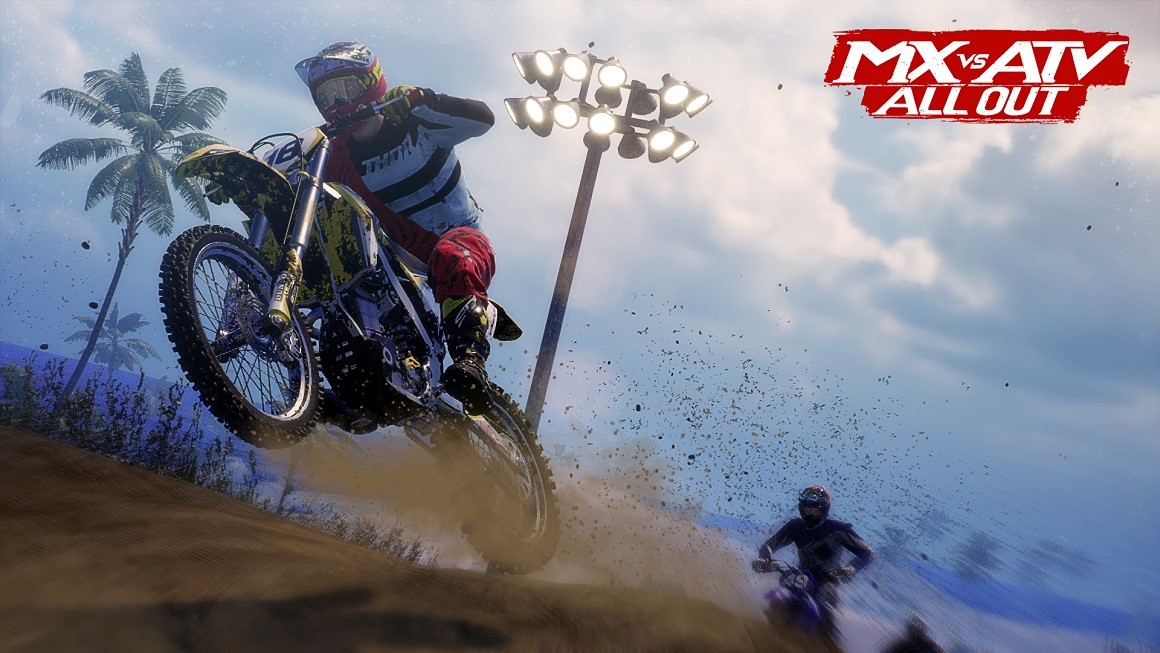 The game lets you change from 3rd person view, front camera and side cameras. You can do this dynamically using the D-Pad but also change the view for the rider. I found this useful to get some perspective for doing some tricks but equally useless for peripheral vision on the bike. Nice to know it’s there though.

The game seems to centrally focus on the vehicles. You can upgrade seemingly each and every major component including the seat, exhaust pipe and decals. You can also tune the bike to get the edge with brakes, suspension, clutch, tyres and of course the engine. I didn’t quite understand how this translates to performance, I couldn’t see any real difference on the race track, but I will say that the first entry level MX125 bike is seemingly useless, at least I couldn’t over take any of the AI riders on the track even on easy mode. Changing your vehicle to the MX450 and the game opened up, it took only 2 attempts at a single race and I was able to finish first.  I was even able to gain a 3-5 second lead, which compensated for my constant drifting off track and at times flying off my bike 30 metres into the opposite part of the course. Remember, if you do this, tap B like your life depended on it to save time. 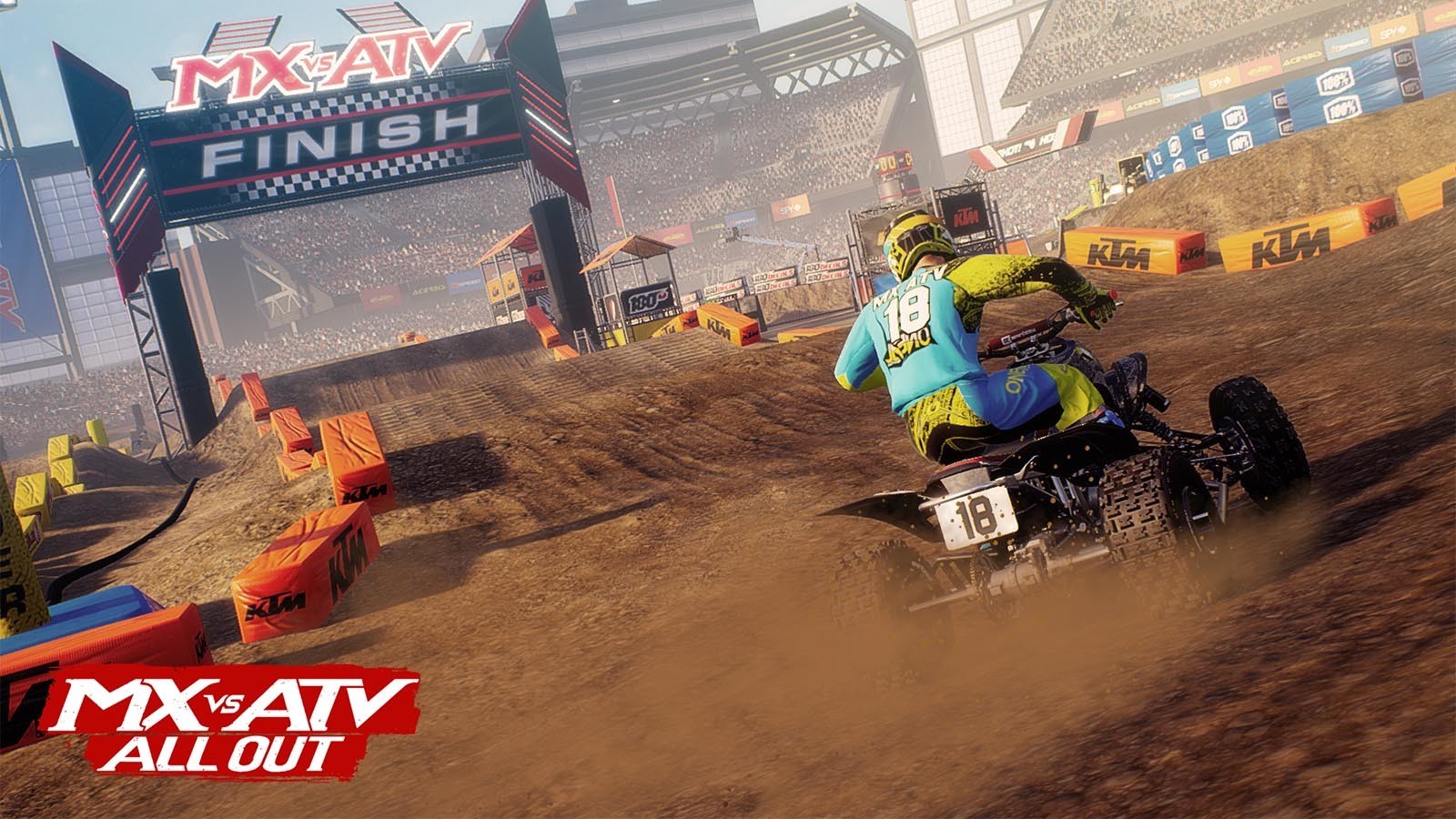 As you would expect, some higher end bikes and ATV’s as well as race tracks are not available without additional purchase. But if you successfully complete a race, you get awarded the Motocoin credits, which in-game you can purchase upgrades for the bikes you do have. The first track I placed last, but still netted around 1600 M credits. When I won it, I got around 2100. So, there is that.

A feature I do like, although not sure if and how it works, it allows you to create custom AI profiles. You can select Male or Female riders, with custom outfit and AI personality. The idea being that you can fill the track with more aggressive or passive competitors. I don’t quite understand how you can pick the skin tone of the character, when yet can’t possibly see the skin tone through the un-removable helmet. But, you can pretend. 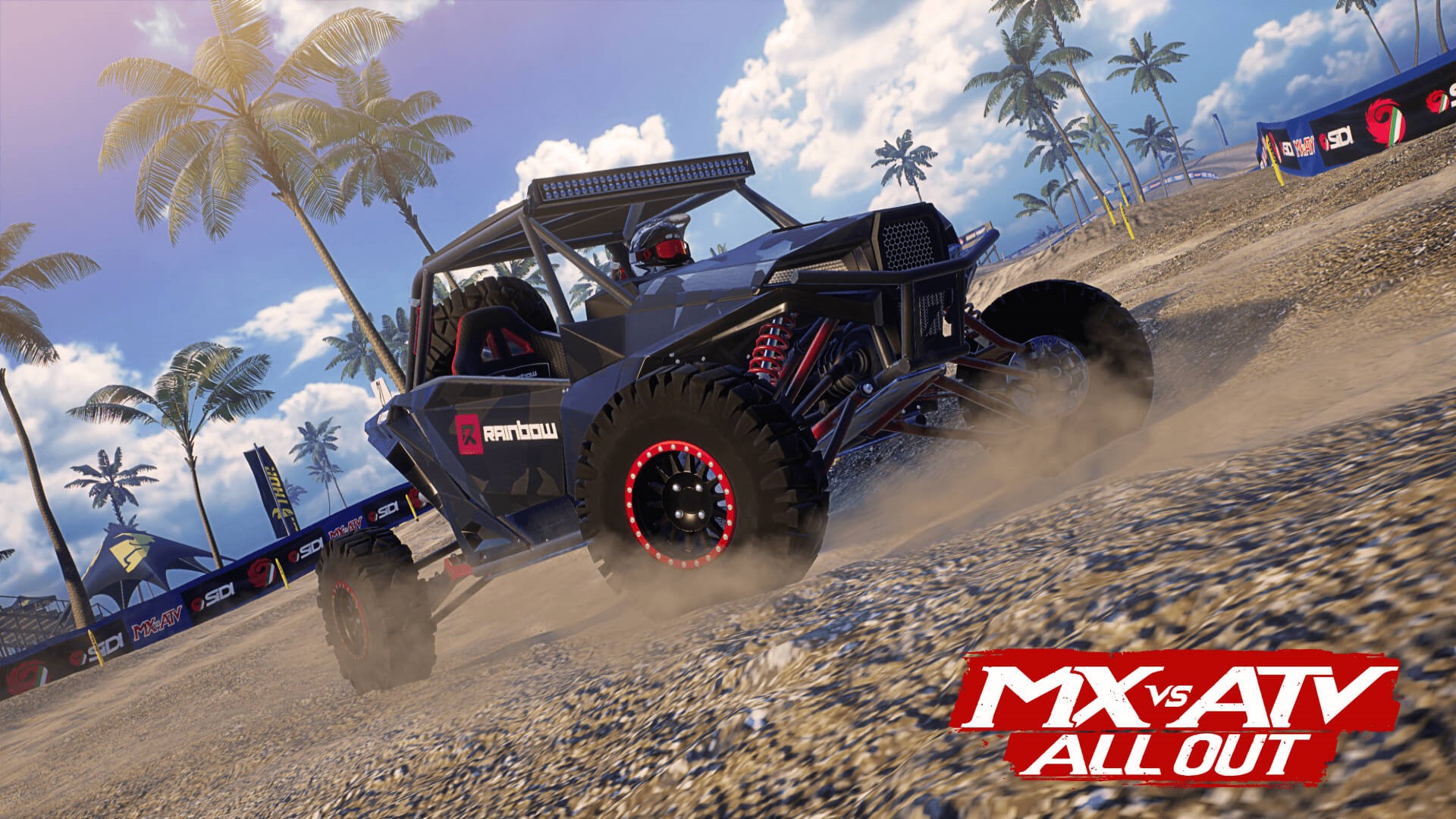 The non-skippable pre-animations for race starts are somewhat comical and cliché, including the same busty race-girl with different hair and clothing for each track, the disconcerting weird looking unnatural expression on her face, and lack of any dialogue make you wonder why the developer bothered to put it in. Slash makes an appearance though, and that’s kinda’ cool!

This game is enjoyable, requires some serious practice to develop your riding skills, and truly does a great job at simulating some of the riding techniques and complexities involved with the jumps, tricks and racing. But the shortfalls in the physics and animations; and even the lack of ambient birds, clouds and dynamic scenery changes, just makes the game feel a bit lacklustre. Hopefully some updates can be released that address these issues. That being said, it’s a worthwhile play and would be most appreciated amongst motor sports enthusiasts. It is easy to overlook the issues and just get ‘into’ the game, and for that, it earns a 3.5/5.