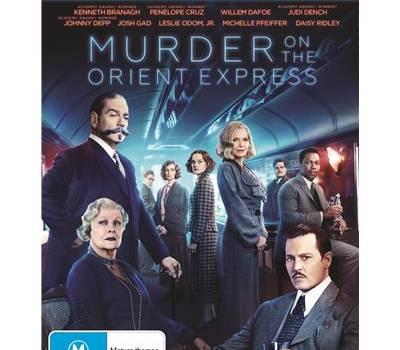 Summary: From the Queen of Crime comes the Prince of Detectives! Hercule Poirot features in one of his most famous cases - a Murder on the Orient Express!

Directed by and starring Kenneth Branagh, screenplay by Michael Green, with Penelope Cruz, Willem Dafoe Judi Dench, Johnny Depp, Josh Gad, Derek Jacobi and Michelle Pfeiffer.
Despite appearing in dozens of novels and short stories by his creator, Agatha Christie, private detective Hercule Poirot isn’t as embedded in the zeitgeist as Sherlock Holmes. And yet he has appeared in a surprising number of movies and television series. In this movie adaptation, Hercule Poirot, Belgium’s most favourite export, leaps full realised onto the modern silver screen.

Director Kenneth Branagh’s career has had an interesting trajectory. He exploded into cinema with Henry V, then zigged and zagged from works as diverse as Othello, Wild Wild West, Valkyrie and latterly the Harry Potter and the Chamber of Secrets. Of late he has been mesmerising in Scandi-noir series Wallander, and directed a Thor movie. And now we have Murder on the Orient Express.

His turn as the obsessed, and obsessive, Belgian detective is a delight to watch. While he bears no physical resemblance to Christie’s description, and his moustache is positively arboreal, as opposed to delicate and precise, he brings a precision to the role that brings the character leaping off the page. Some of the character’s Catholicism comes to the far, as we see in his black and white worldview and also his tortured philosophising over the nature of justice in a fallen world.

The story of Murder on the Orient Express should be well known. A dozen strangers, each with their own secrets and motivations, travelling in luxury across Europe by train, are way laid by a massive snowdrift. At about the same time as the train is brought to a halt, the murder of one of the travellers is discovered. Isolated, fearful of what might happen next, they all come under the Poirot’s evil eye as he works to disentangle fact from lie, and discover the murderer and their motives.

The story is curiously unbalanced. For much of its length, the movie glides along at its own, slow pace, slowly building the elements and introducing a large cast, all against a gorgeous backdrop of wealth, privilege and snow-capped mountains. Then, the last thirty minutes speeds by as Poirot unravels the plot in one fell swoop, and is then left to agonise over what to do.

The direction and photography is sumptuous. Branagh brings a vast grandeur to the surroundings, a landscape that benignly down on the machinations of the humans strutting back and forth. A lot of the exterior shots appear to be rendered in CGI, but for all that, look solid and convincing. Branagh also has a little bit of sly fun with the camera; overhead shots feature at key moments, as well as a delightful Last Supper tableaux at the film’s climax. Often associated with more highbrow material, Branagh isn’t above having some fun while he works in the genre trenches.

Branagh, understandably, has a lion’s share of the spotlight. The other members of the cast, all bona fide stars in the own right, do struggle with the scraps the script offers them. Of them, perhaps Johnny Depp, as the trader Ratchet, gets the best of the lines, oozing menace, fear and uncertainty as he falls deeper and deeper into a web he doesn’t know is being woven about him.

The question, of course, is how good is the mystery? For those who haven’t read the book or seen previous screen adaptations, the main clue behind the murder is surprisingly placed front and centre. But as with any good mystery, it isn’t always the unravelling of the who and why, but the journey to the resolution. Gorgeous to watch and listen, with some fun performances, Murder on the Orient Express won’t exercise your little grey cells but it is an entertaining way to spend two hours.

As befits a major release on blu-ray, the extras in this release are extensive. Agatha Christie: An Intimate Portrait, takes a look at the Queen of Crime and her longevity as one of the premier crime writers of the 20th century. The obligatory theatrical trailers and gallery appear, as well as some deleted scenes. Branagh features in the director’s commentary, and it is always a pleasure to hear his erudite discussion about film making. And we have some brief, behind the scenes features on the making of the film, the art production, and the delightful music that appears.