Summary: More simulation than speed, Mudrunner is a technical marvel on a console

Remember the days when the standard for realistic vehicle simulation games meant overly complex control schemes, inscrutable gameplay mechanics and subpar visuals that make even the beefiest PC’s weak at the knees? Nowadays, games that were once bound to the PC for its power and keyboard controls are finding a home on modern consoles, thanks to advances in technology and developer’s abilities to take advantage of gamepad control schemes. Mudrunner: A Spintires Game, is a great example of a simulation game that has made the leap from PC to home consoles without compromising on its strong simulation core.

For those of you unfamiliar with the Spintires series, Mudrunner is the follow up to 2014’s PC-only debut that was simply titled Spintires, which is an off-road vehicle simulation game with a focus on objective-based missions set in a variety of landscapes. Mudrunner is being pitched by developer Oovee as something of an ‘ultimate edition’ of the original game, with upgraded graphics, physics engine and game content for both PC and console releases. 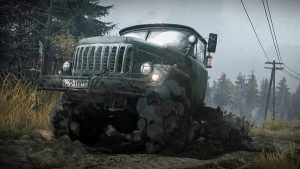 So what do you actually do in an off-road vehicle simulation game? Well, like many simulation games, you perform certain tasks using a variety of off-road vehicles in the Challenge Mode, or you can play a larger continuous campaign mode where you perform tasks to get money that is then used to upgrade your vehicle, so you can go on to perform more and different tasks. I found myself more engaged with the Challenge Mode, as each scenario gives you a new vehicle to try and a unique task to perform with a bunch of bonus objectives to go for as well, which I found to be difficult, yet thoroughly enjoyable. There’s also a multiplayer mode that is basically the same as the single player mode, but with other people sharing the map with you, which inevitably leads to crane-related shenanigans. 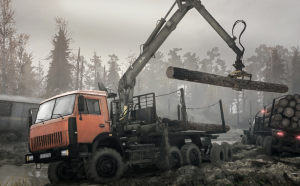 When I heard the Spintires series was coming to console, I had some concerns about how the control scheme would map to a gamepad controller. Thankfully, the developers were able to devise a control scheme that not only feels comfortable for console gameplay, but also retains the complexity of the simulation experience. For the most part, the controls are fairly similar to the standard racing game controller layout. However, the biggest hurdles newcomers will need to overcome are the camera and gearbox controls, both of which are handled with the right thumb stick. 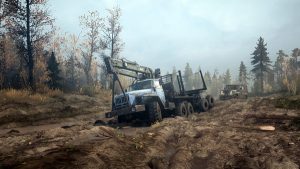 The gearbox is manually operated by clicking in the right stick and then moving it around like you would the gearshift on a car. It takes some practise, but it works well and adds to the immersion of the driving experience. On the other hand, the camera controls take a lot of getting used to and often still frustrate me. As Mudrunner is a 4WD simulation game, it is crucial that you can see all your wheels at all times so you know which driving configurations to engage on the fly, and the camera has been designed with this in mind. As a result, in the first few hours the camera feels clumsy and frustrating to manipulate. Yet as you play more of the game, you learn to focus on different aspects of the driving experience, and the camera begins to feel more natural and effective. 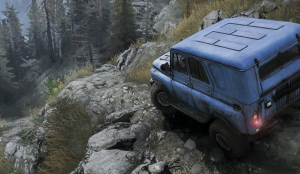 Another concern I had about bringing Spintires to consoles was the graphical compromises the developers would be forced to make so that the game could run smoothly. The original PC release had the best looking mud I’ve ever seen in a video game, and it was a crucial part of the Spintires experience – but the beautiful brown stuff was taxing on even decent PC’s. Yet once again my fears were abated, because Mudrunner not only has great looking mud, vehicles and environments, but it all runs fairly steadily too. Seeing mud build up on your tyres and fling off as you try to winch your way out of a soft marsh looks fantastic and there’s nothing else quite like it on consoles. That being said, the frame rate does dip quite noticeably at times, particularly on larger maps, but it didn’t bother me too much. 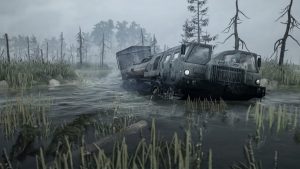 For those of you undecided on whether or not to give Mudrunner: A Spintires Game a try, you need to ask yourself what you’re looking to get from this game. If you’re looking to simply relax and sling mud around a track in a speeding ute, then this isn’t the game for you (I suggest going back to the Motorstorm games for that). If you’re looking for a technical 4WD simulation experience that replicates the act of off-road driving remarkably well, then Mudrunner is definitely what you’re looking for. It runs well enough on consoles, the controls make sense and it has plenty of replayability with bonus objectives plus a fun multiplayer experience. Just like real off-road driving, Mudrunner can be frustrating and difficult, but for the most part it’s fun, satisfying and gloriously messy.