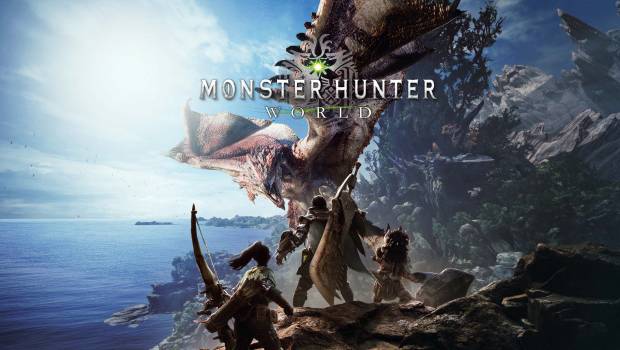 Summary: Monster Hunter: World is the best entry in the long-running action RPG series to-date, accessible for both new players and returning fans expecting the in-depth gameplay systems and rewarding hunt/craft/explore loop we all know and love.

Uragaan have to play this

Capcom’s long-running Monster Hunter series has nailed the classic concept of exploring new lands and defeating exotic beasts for rare rewards for the better part of a decade, with its intense boss-battle style arenas and the promise of bigger monsters and better gear forming an addictive gameplay loop. 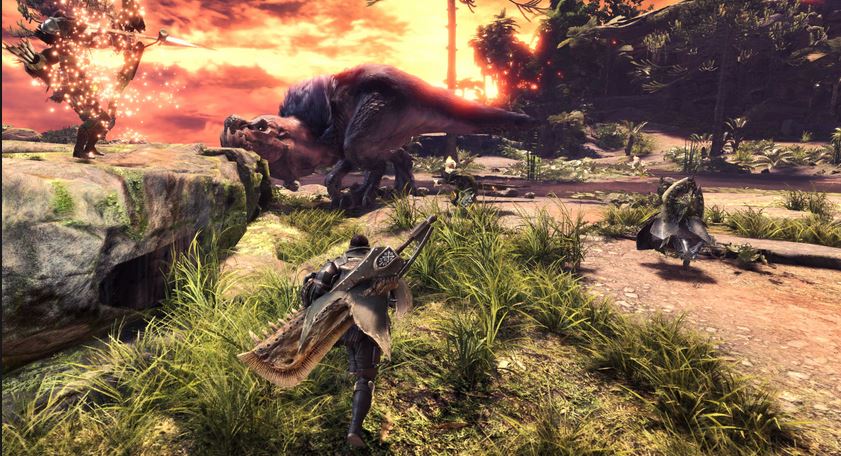 Despite its high praise and popularity with the hardcore, the series has always curiously eluded much of the mainstream gaming audience. Much of that has to do with its deliciously complex gameplay systems which often require a major investment in time to properly learn, and recent entries have stuck to handheld devices, limiting its growth and what it can achieve.

Monster Hunter: World is the first console and PC entry of the series since 2009’s Monster Hunter Tri, and not only does it offer a more graphically impressive monster hunting experience, but it simultaneously manages to cater to both hardcore fans expecting a genuine leap forward in its already very in-depth gameplay mechanics, and new players solely interested in hunting and running around to their hearts content in cool-looking gear.

For those new to the franchise, Monster Hunter: World is an action role-playing game played from a third-person perspective in a semi-open world. You create a male or female character in a fairly extensive character customisation suite before being propped into the role of a Hunter of the Fifth Fleet, a group of exterminators extraordinaire headed to the New World to help the self-explanatory Research Commission study exotic creatures and map out unexplored lands.

An ancient monster of gigantic proportions known as Zorah Magdaros arrives at the same time as you and with other monsters reacting to Magdaros in strange ways, it’s up to your Hunter to solve the mystery. The story is admittedly a pretext, but it’s well-presented and more interesting than anything the series has offered in the past, providing a decent thread of main missions that keep new players on-track and returning fans entertained with new lore. I appreciated having extra motivation to head out on my next hunt, of which there is a seemingly infinite amount. 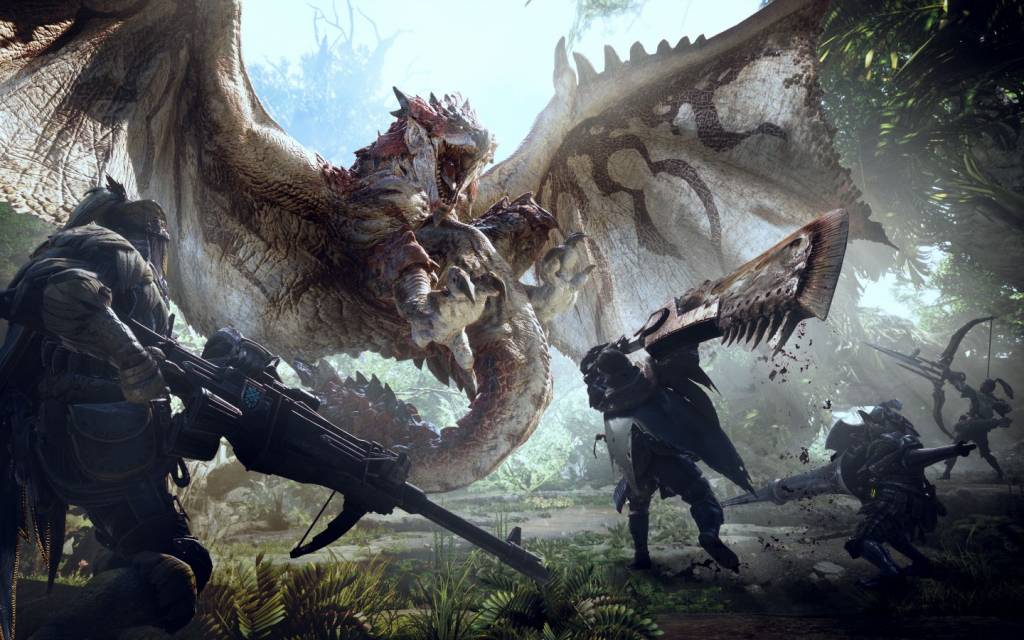 While this basic plot of exploring an uncolonised and dangerous ‘New World’ drives players forward, the appeal and addictive nature of the series lies in its unending promise for cooler and more powerful gear – and Monster Hunter: World is, at its core, a game of grind. You hunt down hundreds of fantasy monsters with a variety of different items and weapons at your disposal, scavenge their remains and gather environmental resources to craft bigger and better armour and weapons with your loot – just to go out on another expedition and do it all again, but better.

All Hunters start off with the most basic of armour and weapons to hunt down foes, with around 14 different weapon types to choose from that drastically change how you play. The sword and shield suits players who like traditional melee combat, the lance provides defense-oriented movesets while oddball weapons like the Hunting Horn performs melodies that boost your stats. The detail in each weapon’s animations and movesets is astounding and I spent a crazy amount of time toying around with them all to find the style I found most fun and unique on the field.

The monsters you face are just as detailed and varied as the tools you use to hunt them, with a variety of creatures of all shapes and sizes resembling real-world reptiles and birds of prey and tons of unique fantasy beasts that keep things very interesting such as the Kulu-Ya-Ku, a bird/wyvern hybrid that hops around with stolen eggs, or the Anjanath, a dinosaur-inspired monster immensely aggressive towards both hunters and other species. Not all fights are of boss-battles proportions, either, with many smaller but equally dangerous creatures roaming in packs or lurking in the shadows.

All beasts have their own behaviours, attack patterns, strengths and weaknesses you must learn to successfully overcome them. One thing the series has been praised for is the lack of traditional health bars for monsters; instead you must watch out for visual and audio cues, such as limping or when they flee in desperation, to know when a monster you’re hunting is low on health. In World, these little details make each combat encounter, already incredibly varied because of all the different combos and tactics available for each weapon at your disposal, all the more engaging.

The best part of battle, of course, is the materials monsters offer once captured or killed and the sheer amount of gear and items you can make (and show off to friends). The rarer, more coveted gear requires much more resources than the basic equipment and the hunt for the increasingly difficult monsters that can unlock each piece remains fun and properly challenging throughout the 50+ hours of content on offer. Back at home-base, you can buy items and upgrades to better your hunter or hand in to NPCs for quest rewards, but the best stuff always comes from your conquests and your latest plunder of the exotic lands in which they inhabit.

While the combat remains and complex and deep as ever (and the tutorials, unfortunately, as brief and ambiguous as past entries) the best quality-of-life change in World is the way you find and track monsters. In past games, after accepting a quest you would simply roam around each zone until you could mark your prey with paintballs, but now you have scoutflies, glowing bugs that hover around points of interest such as footprints or plants or ore. Find enough evidence and they can eventually lead you to the monster itself and mark it on your map, which eliminates a lot of the tedium of past games and is especially appreciated due to the frequency of how much monsters flee from battle in World when wounded. 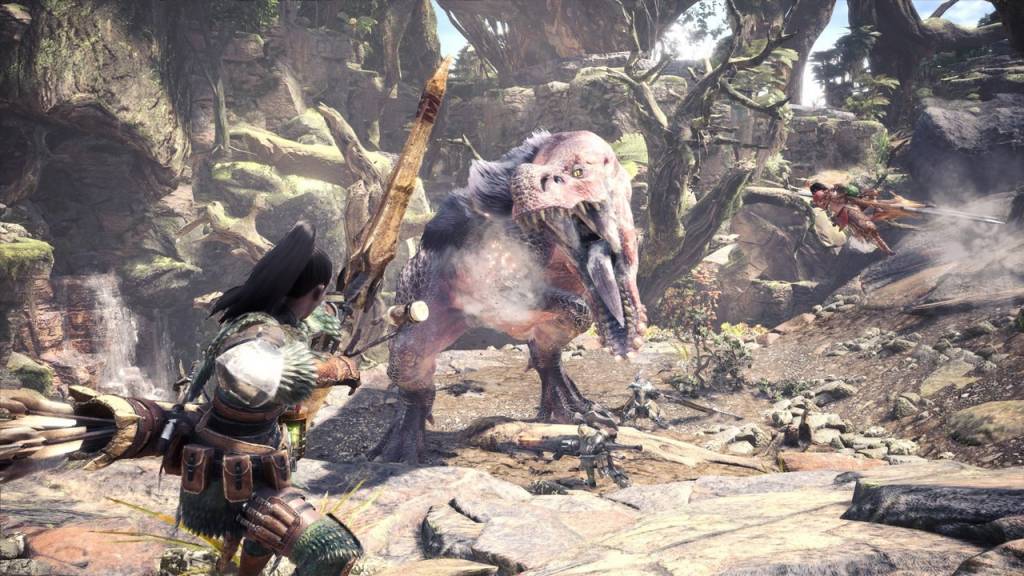 The scoutflies helped me realise just how more alive the environments in Monster Hunter: World are. There are literally entire living eco-systems on display, tons more resources to gather out in the field (along with secret paths and other side-distractions) and larger amounts of passive and aggressive monsters to hunt down in between your main targets – with noticeably better artificial intelligence that truly make you feel like you’re out in the wild roughing it. Even when you’re with friends, the game will scale the difficulty accordingly to present a consistent challenge.

Another big change immediately apparent in Monster Hunter: World for series veterans is the removal of zones and the larger scope of each hunting ground. While not truly open-world, the shift from handheld to consoles has allowed Capcom to create larger and more detailed environments. The main camp of Astero is as massive as you expect, with tons of NPCs, stores, structures and side distractions in between your main quest givers, while every hunting location from the starting Ancient Forest to the aesthetically breathtaking Coral Highlands are massive and full of unique flora, fauna and terrain. Transitioning between areas in each section of the world map is seamless and exploration in general is just much more fun than running between numbered, cordoned off sections as in past MH games.

After initial exploration, players will still revisit the same locations for their missions and free-roaming expeditions (where you can hunt, capture, fish, mine and explore without an objective or time-limit) but the game does a great job of making things feel dynamic with the day/night system and constantly roaming monsters so it’s a different experience each time.

One of the coolest parts of Monster Hunter: World is your Palico, a computer-controlled cat companion that heads out into hunting expeditions with you. Palico can be customised similar to your hunter with their own gear, bonuses and stats, and there’s several other Palico NPCs out on the field to help you out during hunts if you lack online allies. 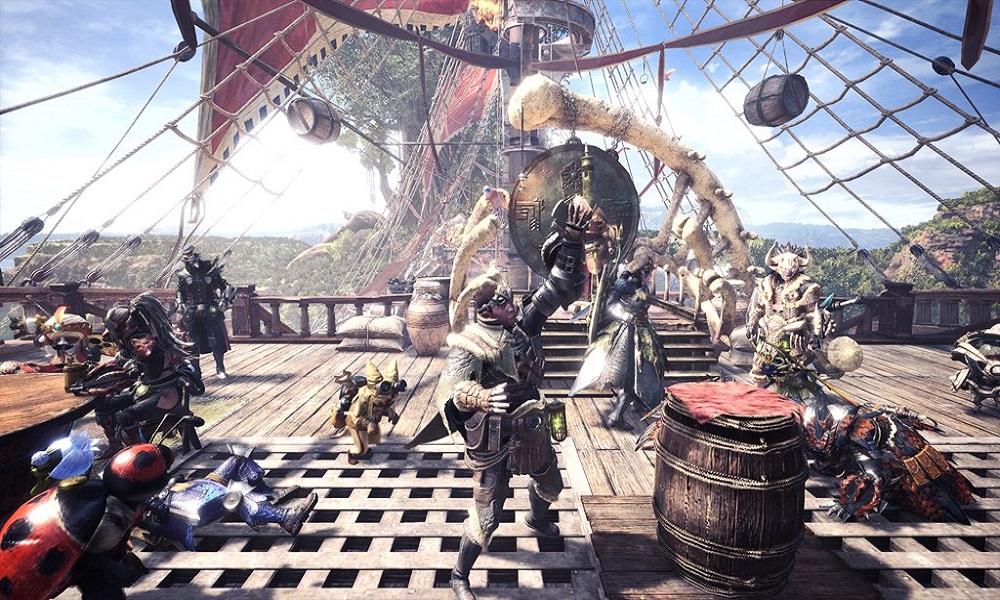 All of these improvements add to the overall immersion of the experience, and the fact you can play with up to four friends (or randoms) or solo with a few menu clicks is amazingly fun. World features a more persistent multiplayer co-operative experience compared to recent predecessors, with players able to jump in and out of quests with friends or strangers, before and during (aside from specific main story missions with cutscenes).

It’s true Monster Hunter: World throws a lot of complex systems and concepts at you throughout the duration of playtime, and it’s definitely not a pick-up-and-play game or a title for those who don’t have the time necessary to sink into its very deep RPG systems – if you do, though, stick with it and you’ll be rewarded with an endlessly complex and satisfying gameplay loop of exploring, hunting and crafting, whether solo or with a friendly squad.

Monster Hunter World is the first game in the long-running action RPG franchise which properly caters to both hardcore fans enamoured with its endlessly deep gameplay systems and newcomers intrigued with the premise of hunting down exotic fantasy monsters – thanks to smart streamlining of its more obtuse elements and substantial improvements to its online multiplayer options which make progression a lot easier for newcomers or those who don’t have 50 hours a week to sink into the game on their own.

As a casual fan of the long-running action RPG franchise, its addictive loop of hunting, scavenging and crafting has been enough to hook millions of other players in, let alone the tons of in-depth gameplay systems behind its strong foundation. But it’s apparent World is a giant leap forward in terms of accessibility and scope and a must play title for newcomers and hardcore fans alike.