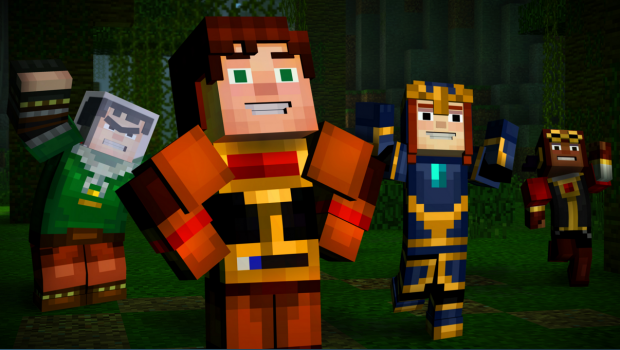 Summary: Join a group of friends on a quest to find the legendary heroes that can help them stop a monster from destroying their world.

The legendary tale of The Order of the Stone has been told across the land. Four heroes (Gabriel the Warrior, Ellegaard the Redstone Engineer, Magnus the Rogue and Soren the Architect) daring slaying of the mysterious creature known as the Ender Dragon is now the story of legends. With their story complete, the heroes slipped away into the pages of legend… until now. Because when one story ends, another begins in Minecraft: Story Mode brought to you by Telltale Games. 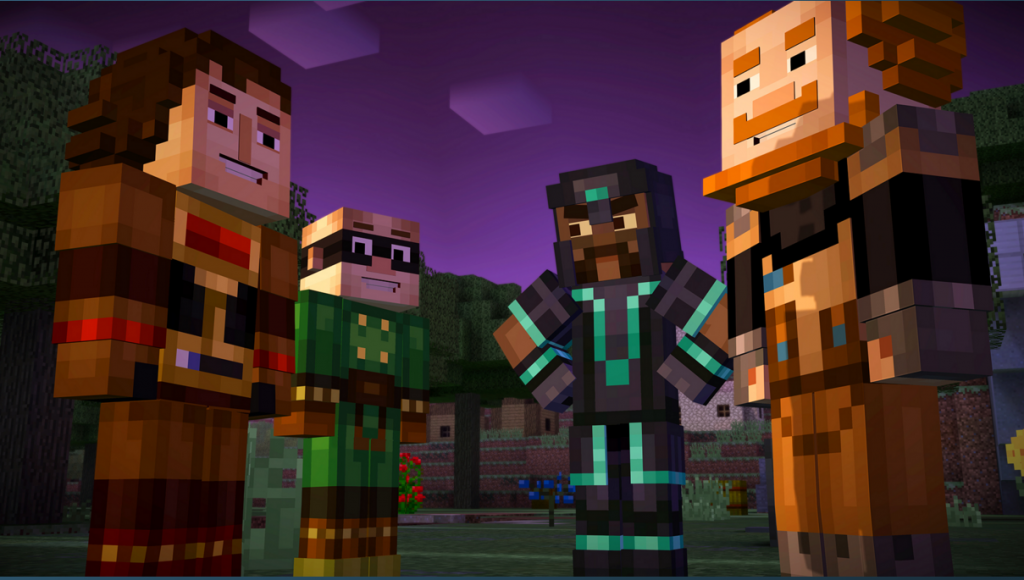 Exploring the famous block universe (which stays true to the original Minecraft theme) we follow a group of misfit friends (Jesse the leader, Olivia the thinker, Axel the muscle and Ruben – Jesse’s pet pig that is oh so cute!) on their way to the annual EnderCon festival with the hopes of meeting one of their legendary heroes – Gabriel the Warrior!

But when a mysterious and evil villain shows up, conjuring a deadly creature known as the Wither Storm, the day’s events quickly spiral out of control as the monster sets about destroying everything in its path. This sets you on a quest full of adventures that will have you and your friends travel to the ends of the world (and beyond) in search for the legendary heroes from The Order of the Stone, because, surely they can find a way to defeat this monster? After all they took down the Ender Dragon…right? But finding these heroes won’t be easy. Along the way you will have to fight, run and hide from the most famous Minecraft zombies, creepers, spiders, and more, all while trying to keep your group together and alive. 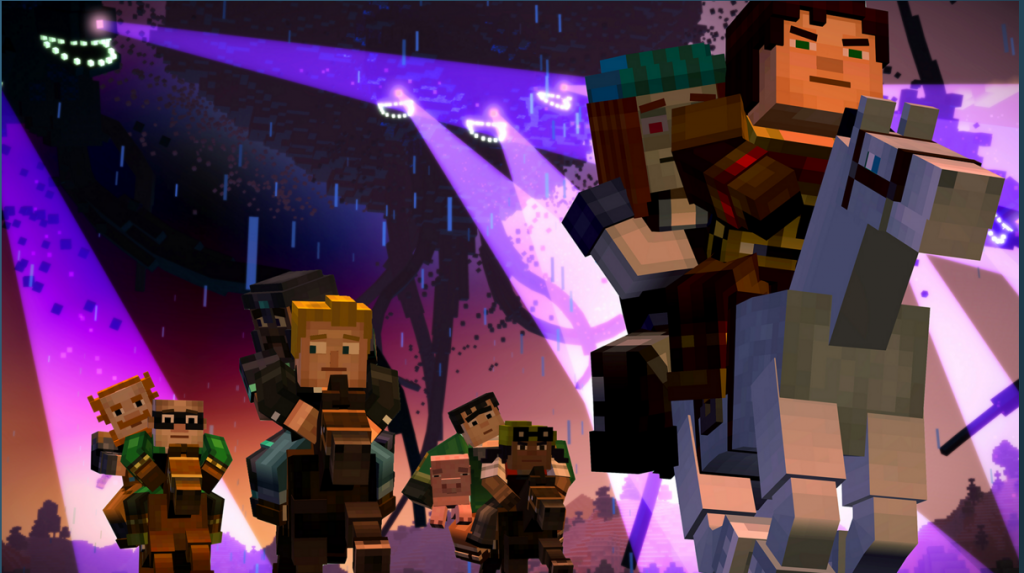 With eight episodes (averaging about two hours of gameplay each) Minecraft: Story Mode is modelled as a playable television show where you are the star and where your choices and actions decide on how the story is told.

Navigation is simple using the basic buttons and left and right thumbsticks to move the characters around the screen. Interactive objects are clearly indicated for you to click to explore, use or pocket an item (no matter how big it is) and QTE options are used throughout the game but are never complicated or overwhelming. And at the end of each level you have the option to review the stats of the choices you have made against other players of the game as well as the ability to restart any level to change the direction of the story for that level. 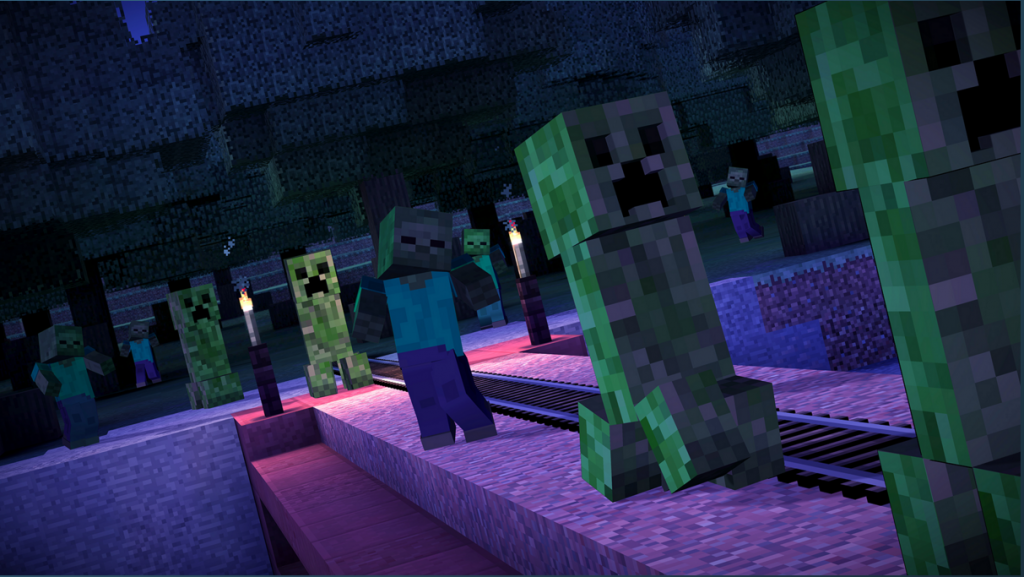 Each scene and background is laid out to give you then sense that you are playing the original Minecraft game (and it did make me want to go and play it). The shape and build of the characters are also similar but have more fluidity in their movement together with their own outfits, personalities, quirky facial expressions and cheesy grins.

The background music and sounds effects are good and an all-star cast is used for the voice acting of the main characters, with my favourite being the narrator Billy West who most fans of Futurama will know as Dr. Zoidberg! 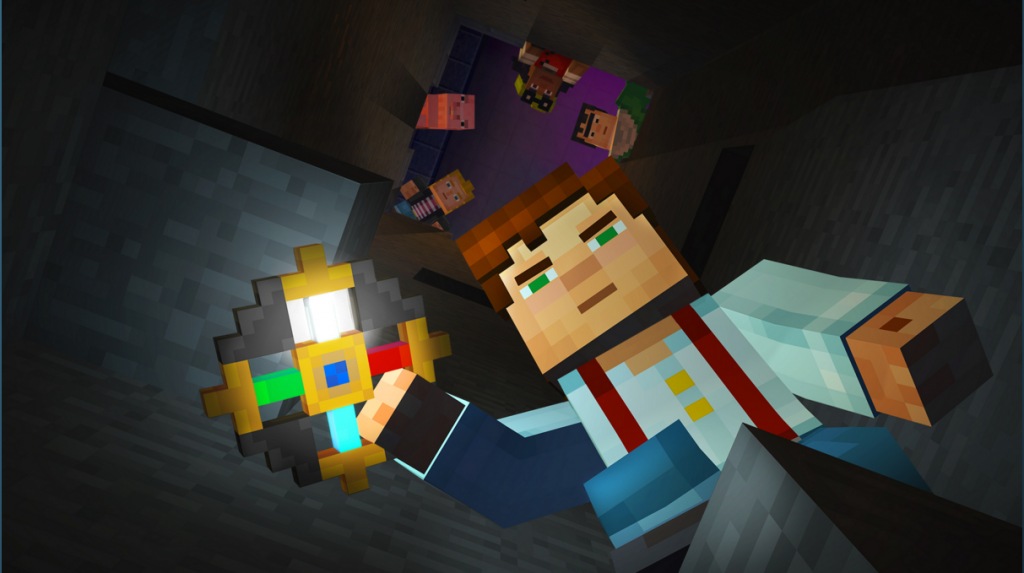 The simplicity of controls and navigation in Minecraft would suggest that it is geared more towards children but with iconic 80s film references and dry humor it can be fun for adults too. If you are looking for a game full of puzzles and where your choices will make a dramatic impact to the outcome of the game, then this isn’t for you. But if you like the idea of a playable television game – you have come to the right place. The humour for the older generation and the story and gameplay for the smaller ones makes this a great one to play with your children, nieces and nephews too.