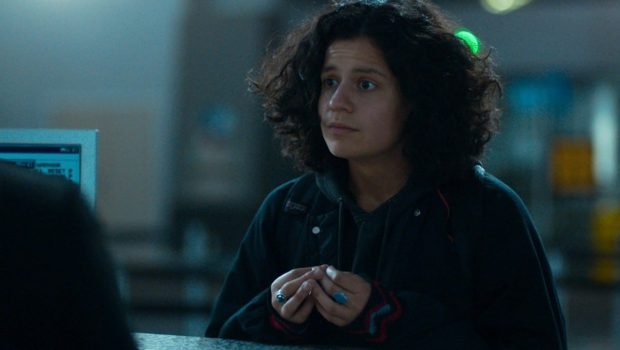 Summary: A comedy caper that is brimming with dramatic elements. This story looks at a young woman’s series of bad decisions that spiral quickly out of control.

“Millie Lies Low” is a film with many contradictions. It is like a slapstick comedy caper but with a sharp dramatic edge. The story tries to feel humanistic but there are moments that require a suspension of disbelief by audiences. What it does prove is that this mysterious character study is brimming with both excellent layers and promise. `

Michelle Savill directs this film and co-writes this clever script along with Eli Kent. The inspiration for the story came when the former missed an important flight and was left wondering, ‘What if?’ In this drama’s case, the titular character is poised to complete a prestigious internship in New York. Except she has a panic attack before take-off. This leaves her stranded in Wellington and scrounging around to find money to afford a replacement flight.

Ana Scotney (“The Breaker Upperers”) caries this film. She brings an energetic and empathetic edge to Millie, elevating her beyond a young woman making bad decisions. She goes to great lengths to stage and Photoshop herself in New York to give the allusion that she had traveled abroad for her social media followers. Audiences will feel for her and also want to take her aside to knock some sense into her.

There is no denying that Millie is an interesting character. Her childhood is briefly described as a partial cause for her anxiety and part of her true self is shrouded in mystery. This is both a good and bad thing as some viewers may be left wanting to understand more about her actual motivations, as this explanation is a tad simplistic. Others still may enjoy that things are left to the imagination.

Rachel House plays Millie’s mum and offers up some context for Millie’s perfectionistic, people-pleasing tendencies. We are also introduced to Carolyn (Jillian Nguyen), Millie’s best friend, and boyfriend Henry (Chris Alosio), as she tries to hide from her loved ones. Millie is ultimately a tough character, slogging it out in alleyways and the bush. It could have become rather grim, but Savill keeps an upbeat tone, even in the most dire moments.

“Millie Lies Low” is a character study brimming with social commentary and human psychology. It is a sympathetic look at a young woman’s doubts, insecurities, and embarrassments- making it a really human story. This is ultimately is a sharp satire and a relatable one to boot, as it will likely leave many viewers asking their own versions of “What if?”