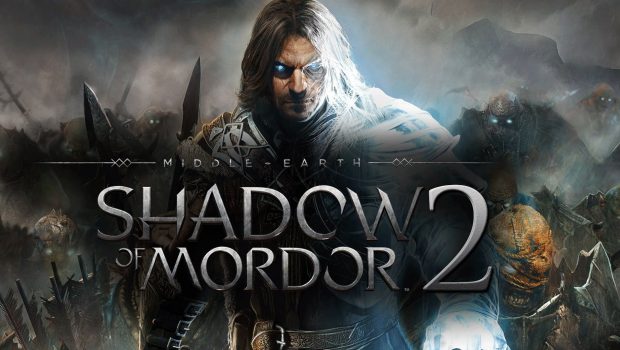 Summary: Perhaps you might slap your forehead in dismay by the goofy plot or looseness to the source material but what's undeniable is, that Middle-earth: Shadow of War is a lot of fun.

With the world’s most powerful console just released, Xbox One X owners can now experience Middle-earth: Shadow of War in stunning 4K graphics plus HDR (High Dynamic Range) which not only increases the resolution of the game but improves the overall textures which is quite stunning on our TV. Although there are some limitations to this mode in terms of the graphical power needed to move this world around, the developers have added another option which increases the special effects, draw distance and adds more items to the environment but not the resolution.

So let’s talk about what makes Middle-earth: Shadow of War tick. The first instalment in the Lord of the Rings spinoff was a surprising success back in 2014, with critics and fans heaping praise upon its outstanding combat mechanics and distinctive characters. Much like its predecessor, Shadow of War is a game of gargantuan proportions; a vast open-world adventure full of monsters all eager to kill you off.

While the last decade has seen games of this ilk improve with bigger maps and better graphics, Shadow of Mordor‘s Nemesis System was, in my opinion, the most innovative idea brought to the open-world genre in the last ten years. Although it’s surprising other RPG’s haven’t gone down the route of creating their own type of Nemesis System, pleasingly, it returns in Shadow of War; bigger and more enthralling than ever. 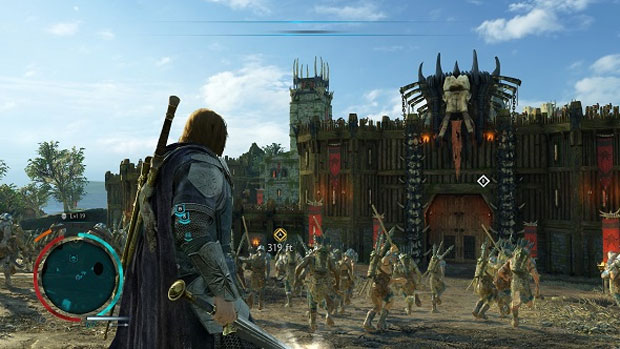 To summarise, the Nemesis System consists of multiple Uraks all of which have their own persona. As you take control of the protagonist Talion and fight your way through Sauron’s army, each Orc will react to your actions, usually resulting in a violent confrontation which either party can initiate at any time. Kill an Orc and another will slide into his place, lose to one, and that Orc will gain recognition. Essentially, the Nemesis System operates much the same as it did in Shadow of Mordor with endless possibilities creating a unique gaming experience.

Needless to say, exploiting a soldiers’ strengths and weaknesses is extremely satisfying and like Shadow of Mordor, it didn’t take me long to build rivalries among Sauron’s army. In fact, in the early stages of the game, as I sought-after a warlord to beat to a bloody pulp, I was the victim of an ambush by an Orc commander. Like me, he was also on the prowl but looking to butcher me to gain recognition among his fellow troops.

Although I survived this particular assault, when you do succumb to defeat on the battlefield, the rivalry isn’t over, as the Orc that beats you becomes more powerful. Consequently, if you’re anything like me, you’ll then scour the realms of Middle-earth on the warpath to bring him and his followers to their knees. Alternatively, if you don’t fancy doing the dirty work yourself, you can always brand an enemy captain which allows you to control their mind and trick them into fighting for you. 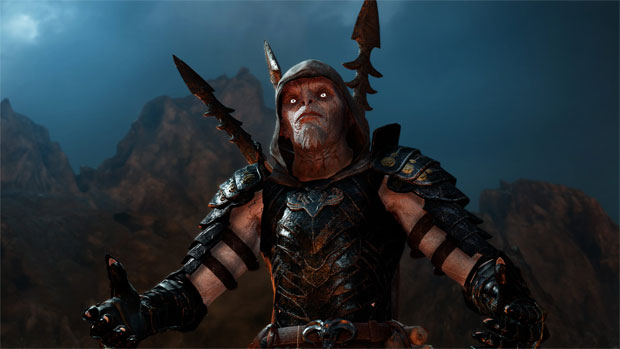 It’s fair to say, with the possibility of building so many rivalries that differ each time you jump into its world, Shadow of War’s Nemesis System feels like a game unto itself; a thoroughly engaging feature that I can happily fight my way through while semi-neglecting the real storyline.

Speaking of story, once again you take control of Talion and his elf-wraith buddy Celebrimbor as they forge a new ring and marauder through Middle-earth killing Orcs and goblins while helping a few noble people along the way. At least, that’s what I presume they’re doing, the story is a little confusing and so I found myself not caring a great deal as I preoccupied my time annihilating Uraks and riding Caragors up the side of buildings. Ultimately, Shadow of War‘s plot is a bombastic tale and slightly nonsensical.

Although the Nemesis System alone is engaging enough, the story just isn’t as gripping as it was in Shadow of Mordor, maybe because by the time you start Shadow of War, your emotional attachment to Talion isn’t as strong. The opening scenes in the original game saw Talion’s wife and son butchered while he (Talion) gets his throat slit. Now, that’s a pretty morbid start to any story but this sorrowful moment helps build a meaningful rapport between the player and Talion. This time, the story isn’t as emotionally hard-hitting making it feel slightly less significant overall. 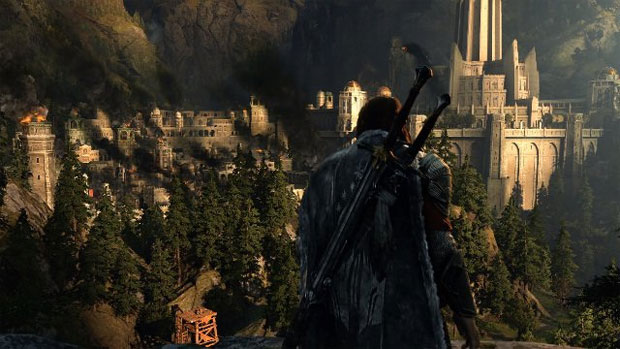 However, there’s plenty of side quests to keep you busy with each mission jumping from region to region. Some of these tasks are mundane, such as ‘purifying’ Haedir towers so you can gaze across your surroundings and uncover different types of collectables. While others are engaging, like the “Shadows of the Past” quests where you take control of Celebrimbor in missions which can yield extra experience, skills and equipment to use. As you progress through Shadow of War, you’ll earn skill points and unlock new weapons and armour. This area of the game is more in-depth than the original, with plenty of new combat moves available to master. In regards to the fighting mechanics, the developers’ rightly opted for the “if it ain’t broke, don’t fix it”approach with the outstanding Batman Arkham series’ style of combat returning to the mix. 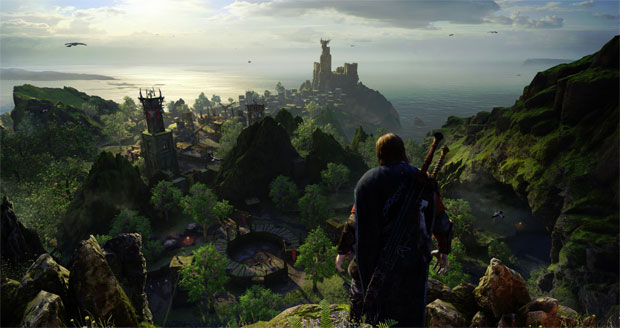 Now, to be honest, I didn’t want to go into great detail about the microtransactions in Shadow of Warbut unfortunately, it’s difficult not to. After you complete the main quest, you enter a phase called “The Shadow Wars” where enemies attempt to overrun your defences and conquer your fortress. Consisting of ten missions, this part of the game is pretty gruelling and your army is likely to suffer multiple casualties. Needless to say, it’s quite a challenge, therefore the game offers you the option to purchase items such as captains to man your fort or new gear for Talion. Ultimately, the choice is yours – grind it out or buy some upgrades. Essentially, it just depends on how quickly you want to unlock a little bit more of the story.

The Xbox One X version also supports Xbox Play Anywhere which allows you to play this game on Windows 10 machines, the Xbox One and the Xbox One S with all your save files. This is a fun option if others in your family want to use the glorious 4K HDR TV in the lounge room but you do need to download the game again.

Visually, Shadow of War on the Xbox One X does look amazing in 4K HDR with the increased resolution of colour palette and the other option with increased graphical content makes the game more populated, however there is some slow down at times but compared to the non-4K versions, both are quite strikingly impressive, even with the slightly muddy textures. Complementing this is the musical score, most notably the pianos and violins which is pleasing to the ear. 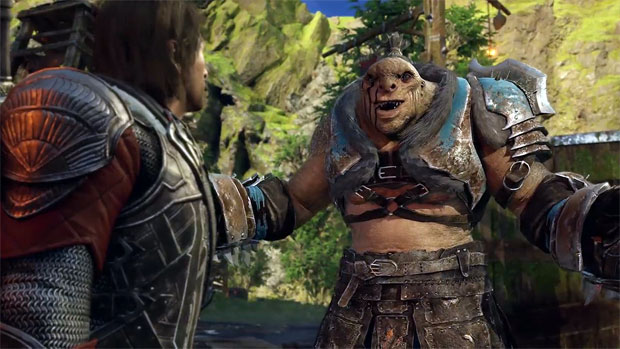 If you’re a fan of the Lord of the Rings mythology, you’d be forgiven for thinking that the Middle-earth games don’t compliment the lore of the books. Spawned from a series of epic fantasy novels, this loud, insane, adrenaline-filled open-world adventure certainly isn’t true to the works of author J.R.R. Tolkien. Perhaps you might slap your forehead in dismay by the goofy plot or looseness to the source material but what’s undeniable is, that Middle-earth: Shadow of War is a lot of fun on any console, especially the Xbox One X.