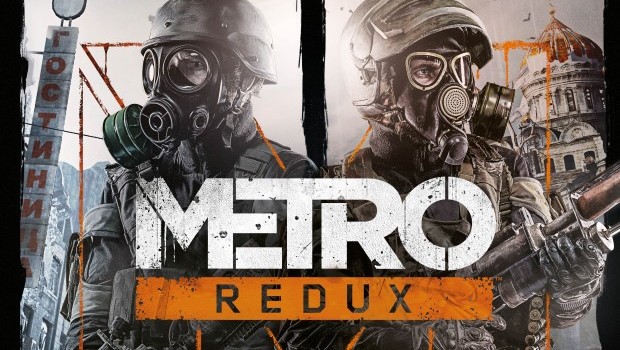 Summary: The A.I can frustrate at times and the gunplay isn’t the most refined experience available but overall I can safely recommend Metro Redux as one of the more enjoyable gaming experiences I’ve had this year.

Crouching in waist deep water you move forward, trying to make as little sound as possible. Echoing throughout the cavernous confines of the disused Metro system you can hear the caterwauling of a nearby pack of vicious, mutated hellspawn.

Putting your head down you creep forward and turn the corner into what looks like a glowing, green nest filled with alien eggs. You quickly scramble for your trusty gas mask before you inhale the noxious fumes emanating from the eggs, taking care to ensure that it’s equipped with a fresh filter. Wiping the condensation from the mask’s visor, you inch forward, rudimentary shotgun probing the dark pockets of the room. The cries of the mutated suddenly cease – Not a good sign. 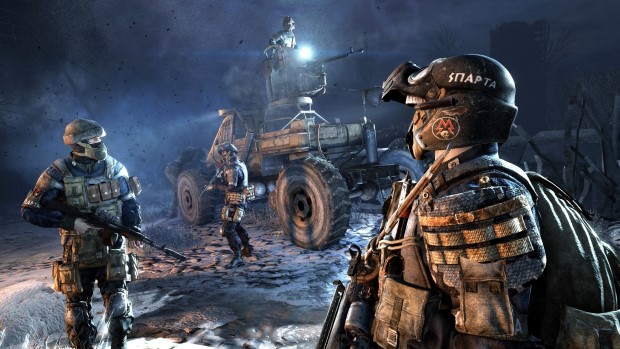 You pick up the pace and wind your way through the piles of luminescent eggs. From behind you comes a faint galloping sound… The mutants have found you. You spin around to face your pursuers, weapon at the ready, but there are only shadows and that sickly greenish hue reflecting off the slick, slime covered walls.

Your trusty torch starts to flicker erratically, obscuring your scope of vision with a nightmarish strobe effect. Frantically you retrieve the manual battery recharger from your backpack and quickly turn the crank, steadily restoring the light to its former strength and revealing the mutant that’s swinging down from the rafters with its ragged jaws aimed at your throat. Panicking, you fire off a shot but it goes wide; the second shot hits the beast square in the chest but fails to halt its momentum.

Suddenly, it’s upon you, viciously snapping at your face, cracking the protective visor of your gasmask. Your vision clouds red as you attempt to reload your weapon… It’s too late. The beasts have you. As you drift away, you see a shadowy figure standing on your periphery. It reaches towards you, its elongated fingers nearly touching your outstretched hand before the darkness claims you.

This is Metro Redux. 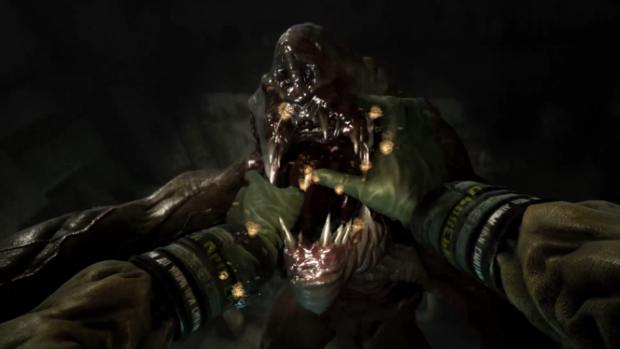 Set in a miserable post-apocalyptic Russian wasteland, Metro 2033 and its sequel Metro: Last Light are bleakly fatalistic entries into the First Person Shooter genre that lean more towards the realm of survival horror than the gung ho warfare of Call of Duty.

Metro Redux is ostensibly a compilation of the two games (Which should be especially appealing to those who missed out on Metro 2033 due to it being available only on 360 and PC) but they have undergone such an extensive graphical and gameplay overhaul, especially the first instalment, that they practically qualify as remakes. 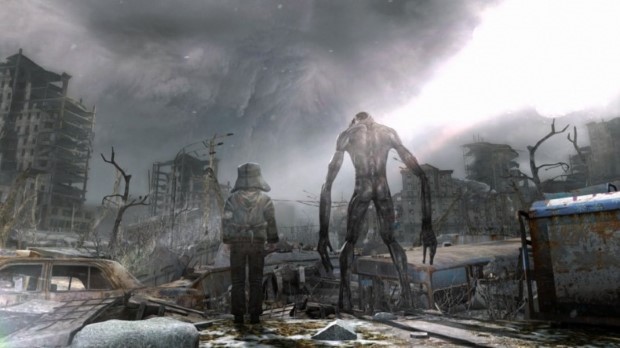 Coming from the Ukrainian development team behind S.T.A.L.K.E.R, the Metro series takes inspiration from the novels by Russian author Dmitry Glukhovsky, using the dour setting to both adapt the plot from the first book in the series as well as expanding upon the mythology by crafting their own unique tale set in the perpetually hostile radioactive Russian wasteland.

The basic premise behind the series is that after a catastrophic world event, Humanity is forced to live beneath the surface in the abandoned subway tunnels that criss-cross beneath Russia. Survival is a constant struggle in the face of starvation, disease and frequent attack by mutated creatures and giant spiders; despite this, humanity thrives, building small societies of underground dwellers, some of which are benevolent, subsisting by trading items in the myriad of ramshackle markets, and others who take a more militaristic stance, ruling over their respective stations and communities with an iron fist. 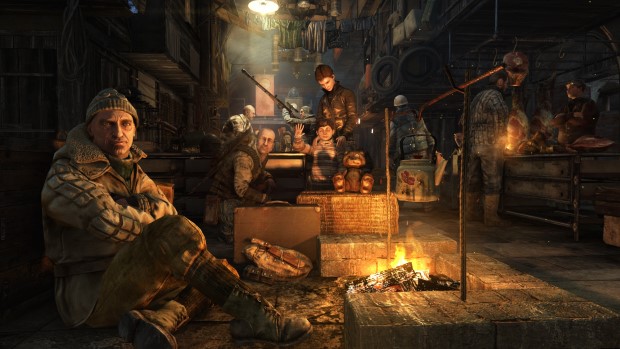 Players take control of Artyom, a humble tunnel dweller who finds himself touted as the chosen one and is thrust headlong into a collision course with the grotesque beasts that stalk the tunnels and the lingering spiritual residue of fallen soldiers, as well as coming in contact with an overtly supernatural element that may or may not have his best interests at heart.

Despite its “One magically gifted man against the world” plot, the Metro games manage to carve out a dismal and oppressive atmosphere and a story that, whilst admittedly generic, is engaging throughout and offer up a few narrative surprises along the way, although the meandering quality of the first few missions may serve to deter the less patient among us. 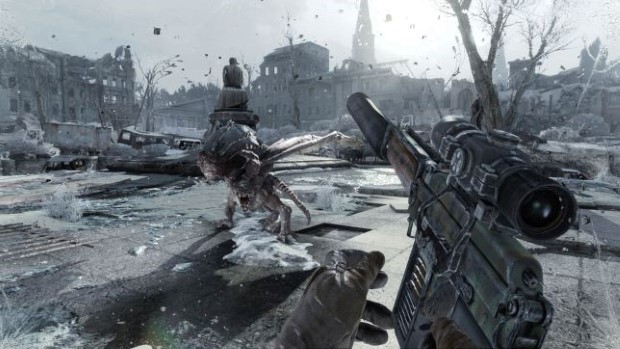 Although there is an inordinately high focus on first person stealth, both Metro titles are FPS games at heart, which makes it a bit of a shame that these elements are among the weakest. Enemies and Ally A.I occasionally goes haywire and many battles see you wielding an unsatisfyingly underpowered weapon that seems to make nary a dent in your enemy’s armour.

This of course serves to heighten the survival horror sensation of being powerless in the face of insurmountable odds but it also unintentionally frustrates as you struggle to proceed past a particularly difficult section. 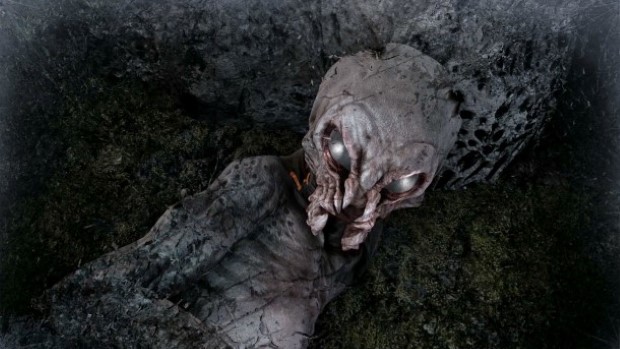 When you start each game you’re offered the option of selecting your preferred play style from either Spartan or Survival mode: Do you go for the more action packed flavour of Last Light or are you a proponent of lurking around the shadows and frantically conserving the scarce ammo supplies? Both are viable options, although this reviewer leaned towards the latter option.

This meant that a large chunk of my game was made up of tense incursions into the shadows as I attempted to hide my presence to varying degrees of success; all too often the game would degenerate into me spamming R2 as I was besieged by a deluge of mutated beats… At times it feels like the developers went a little too crazy mobbing the player with hordes of enemies, especially towards the end of each game. 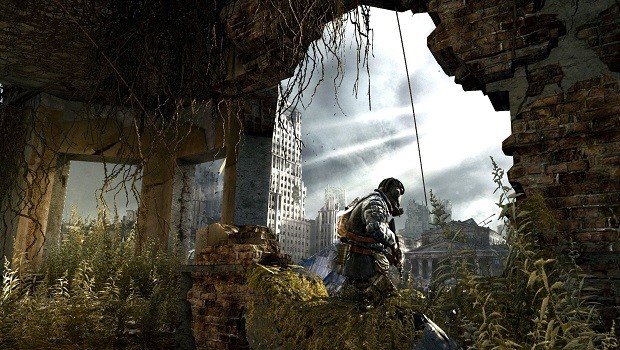 Whilst Metro 2033 is an entertaining experience, personally I felt it paled in comparison to the much more refined experience of Last Light. The gameplay in the second game is much more diverse and offers more of an opportunity for exploration of above ground Moscow and a tightly scripted and compelling story that offers up agonising moral choices for the player to make and more satisfying resource management.

Military grade ammunition serves as currency in the world of Metro and it’ll be in your best interests to scrounge as much as you can, as you’ll be needing to constantly upgrade your weapons and purchase ammo from market stalls as well as buying filters for your gasmasks, a necessity for above ground exploration as the amount you carry dictate how long you can stave off the effects of the radiation. 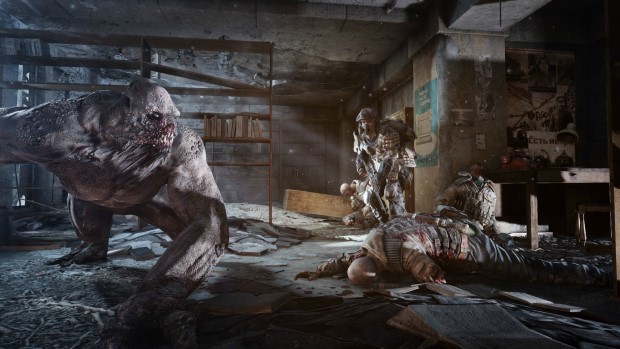 Although both games have had a visual overhaul, such as new character models and being boosted to 1080P, it’s the improvements to Metro 2033 that are the most noticeable, particularly since Last Light was only released last year and, as such, needed less significant minor tweaks and mainly focused on performance.

The games boast an upgraded lighting system and the textures and models have also been overhauled, although a few lower resolution versions from the original game engine still curiously appear here and there. The environments are crisp and packed with detail and have been retextured admirably; in fact, in some case, entire areas have been rebuilt from scratch to allow for access to new rooms and locations. The frame rate is consistently solid and thankfully doesn’t suffer from the stuttering that plagued the original game when situations got too hairy. 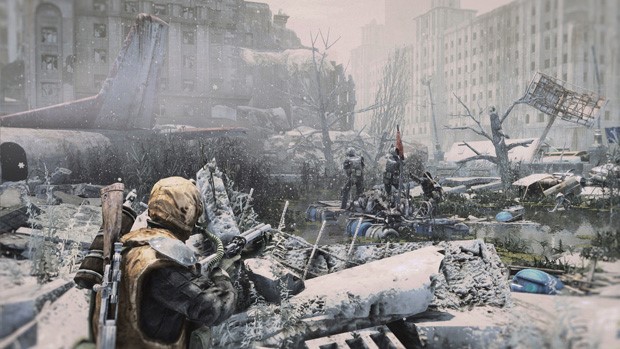 As both games are lower budget efforts, there are some noticeable dips in quality in regards with movement animation and the syncing of audio with lip movements, but for the most part 4A Games have done an exceptional job remastering the visuals for the newest generation of consoles.

Audio wise the sound design of both games work effectively to build tension and immerse the player in the desolate, austere radioactive Russian wasteland. Apparently the soundtrack for Metro 2033 has been tweaked from its original incarnation (And arguably not for the better), although I personally didn’t notice much difference and found the original incarnation found on the 360 not really all that memorable anyway, honestly.

Overall Metro Redux serves as an exemplar of how to do a remaster right. 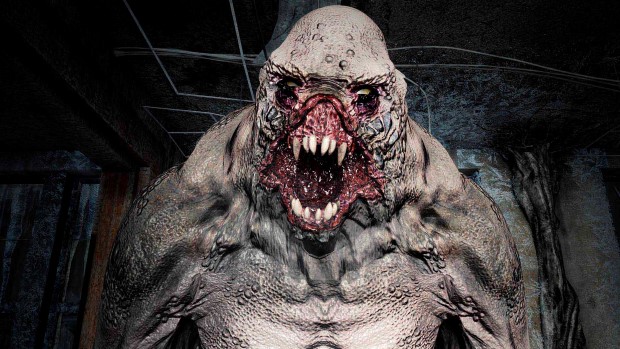 Although it is a bit frustrating in that it sometimes feels like every recent release for next gen consoles are seemingly little more than remastered versions of old games, Metro Redux offers fans the definitive Metro experience, with the visual and performance upgrades and addition of all previous DLC ensuring that even those who have played the previous iterations have something to entice them to double dip.

The horrifying world of Metro 2033 has never looked this great and every change to the core gameplay has been for the better, taking cues from its more accomplished sequel and expanding upon these welcome additions. Last Light’s improvements are much more subtle but no less useful and both games positively drip with a wonderful apocalyptic aesthetic. The A.I can frustrate at times and the gunplay isn’t the most refined experience available but overall I can safely recommend Metro Redux as one of the more enjoyable gaming experiences I’ve had this year. 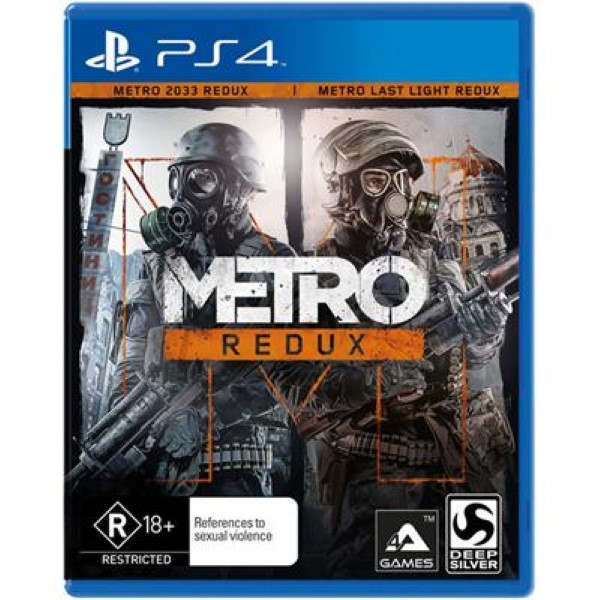