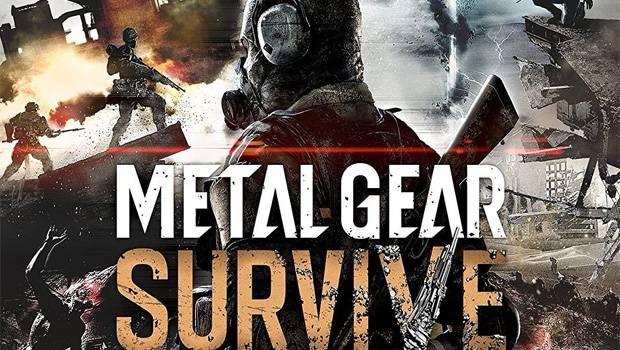 Summary: Overall, Metal Gear Survive is an instantly forgettable, drab and insulting entry in the Metal Gear series that isn't worth your time

It’s Metal Gear but not as we know it…

Metal Gear Survive replaces stealth with survival in what is the first Metal Gear game without the involvement of director Hideo Kojima. 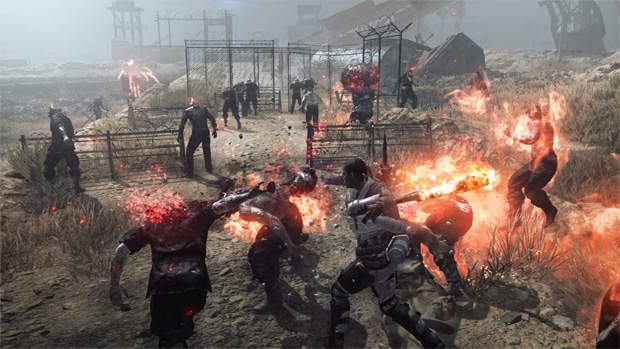 Replacing stealth with hack and slash action mayhem, surprisingly, Rising worked. The reason for this was due to Kojima Productions enlisting the help of developers Platinum Games who are most famous for their 2013 hit, Vanquish.

While developing Rising, Kojima and his team were struggling to design a Metal Gear game that merges stealth with ninja action. Such were the difficulties that Kojima faced; the game ceased development in 2010. It wasn’t until Kojima gave Platinum Games free reign to re-design the project from scratch that Rising began to take shape. 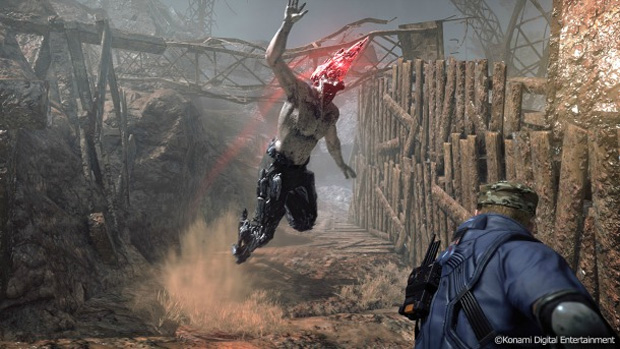 Calling on external help to create a Metal Gear game that departs from the series’ norm meant Rising became somewhat of a success. It’s a shame then that with Metal Gear Survive, Konami opted to develop it on their own. And while it’s admirable that they’ve tried something new; unfortunately, the result will go down as a dud entry in the longrunning Metal Gear franchise.

Firstly, Metal Gear Survive doesn’t warrant the ‘Metal Gear’ in its title. Loosely set in between Ground Zeros and Metal Gear Solid V: The Phantom Pain; Survive is an entirely different kind of experience. Where the traditional Metal Gear games focus on stealth, with survive, your objective is to merely sustain oneself by hunting, crafting, and stabbing a plethora of zombies with a massive spear.

Additionally, Survive’s story involves wormholes and inter-dimensions, but to be honest, most of the time I didn’t know what the hell was going on. To say the plot is a nonsensical mishmash of sci-fi and horror genres is the most accurate description I can give it. For the most part, you’ll be spending your time in a dimension called Dite which looks like a damnable incarnation of Afghanistan from MGSV. It’s here where you’ll find a host of objectives to complete while fighting off hordes of zombies.

While it’s crucial for a survival game to create a sense of fear and curiosity for the player; Survive fails to do any of these. Firstly, the enemy AI performs horrifically and watching a swarm of zombies struggle with the laws of physics is a regular occurrence. 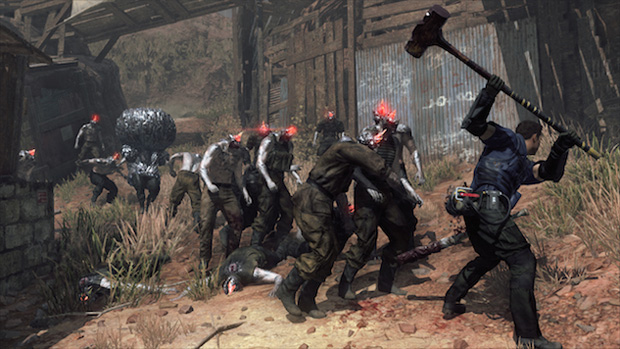 Not only do invisible walls pose a problem for the undead, but actual walls seem to provide a significant conundrum. Watching the enemy get stuck in front of a fence or fail to distinguish my character from a batch of bricks is as funny as it is humiliating.

As for any impulse to get out there and explore; that is entirely non-existent. The wasteland is bland, and the missions uninspiring. That said, crafting and base building are pretty decent. On the flip-side, to assemble a base, you must wander into the wilderness which means fighting more zombies while scouring the monotonous landscape. Unfortunately, I’d rather just not play the game than have to go through all of that.

Aside from building bases and stabbing cone-headed freakshows, one fundamental aspect of Survive is making sure your character stays hydrated. To do so, you must gather food and water before setting off on a long journey otherwise you might find yourself in a spot of bother. 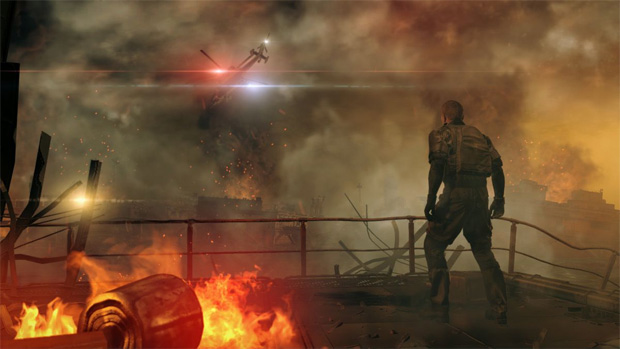 A meter which hovers beside you at all times represents your thirst and hunger. Frustratingly, your character can’t seem to jog for more than five seconds without running out of breath. While paying attention to your stamina levels is nothing new to the survival genre, here it seems like your character only has one lung or a severe case of emphysema.

If you hadn’t already guessed, I found playing Survive a soul-destroying experience. Void of any real fun, it’s a tedious survival game that was difficult for me to play through. It did get better when I went online and took on hordes of zombies with other players, but that enjoyable, albeit brief moment doesn’t mask the problems I have with the game.

Since the gameplay is second-rate, do at least the visuals give Metal Gear Survive something to shout about?

Unfortunately, Survive’s presentation is as stale as its gameplay. What boggles my mind is how Konami was able to create such a shoddy looking game when the Fox Engine and mechanics from MGSV was available to them. Somehow the characters and the environments look like they belong on the PS3, which is a massive insult to the more elegant looking games of the last generation. 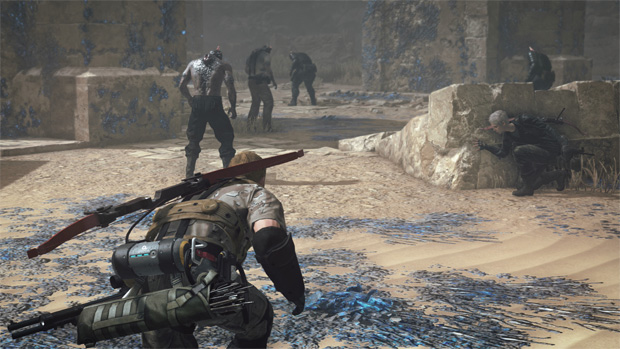 Baffling AI behaviour, dull environments and a stupid story mean that even as a standalone survival game, Metal Gear Survive fails on too many levels. There are far better games that deserve your money. For example, if you want a complete survival experience, then ARK: Survival Evolve or 7 days to Die are better options on the PS4.

That said, if you want to spend $60 on a mediocre survival game, have a spear jabbing fetish or think that paying Konami $10 for an additional save slot on your hard drive is an acceptable practice, then Survive is worth a go.

Overall, Metal Gear Survive is an instantly forgettable, drab and insulting entry in the Metal Gear series that isn’t worth your time. Even if you strip the Metal Gear title away, it’s a lacklustre survival game that belongs in another dimension.