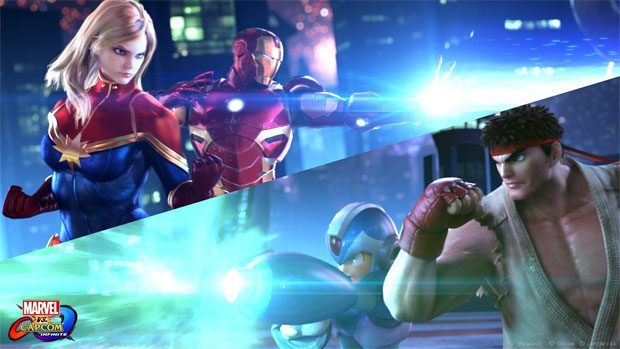 One of the age-long questions in life is whether you are a DC or a Marvel Comics fanboy. For this reviewer, I’ve been a Marvel fanatic all my life, but in the video-game space, it’s hard to argue their latest collaboration with Capcom does the license justice, as either a fighting game or even an entertaining “What If?’ interactive comic-book video game cross-over. 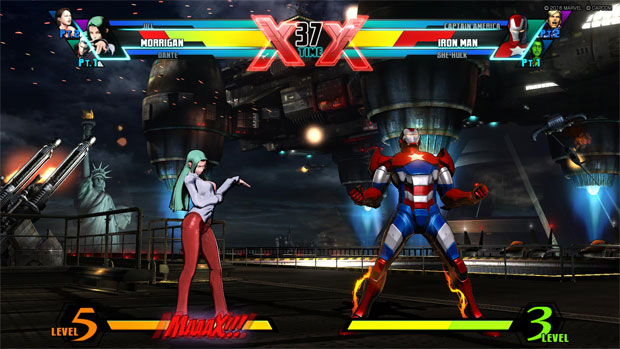 So, what is Marvel vs. Capcom: Infinite, then? For this reviewer,  a serviceable overdue follow-up to a iconic franchise fast transitioning into mediocrity.

For newcomers unfamiliar with the franchise, Marvel vs. Capcom: Infinite is focused around chaotic two-on-two tag team combat between heroes and villains from Marvel Comics and Capcom’s massive stable of iconic video game characters, down from the slightly more involved three vs three fights introduced in its 2011 predecessor, Marvel vs. Capcom 3: Fate of Two Worlds. The general fighting mechanics are as fast, frantic and combo-heavy as ever, but Infinite swaps out tag team assists in favour of letting players call their second character whenever the time is right – mid-air, mid-combo or even mid-animation – to pull off devastating attack strings or execute precisely timed finishers, all with flashy animations and battle cries which do justice to the unlikely cast of comic-book heroes and video game icons assembled. 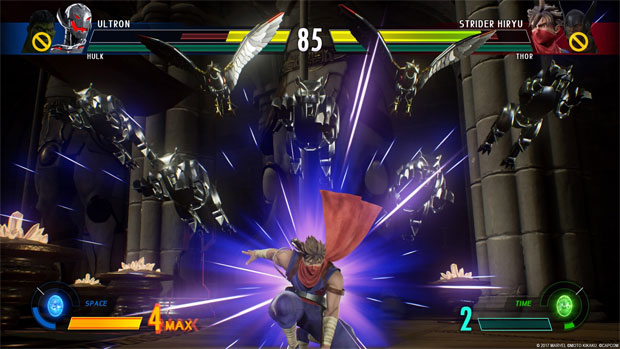 As a fan of past Marvel vs. Capcom titles, the flow of these fast-paced fights are still fun and the presentation impressively slick – and overall, fights feel less weighty or punishing than comparable titles like Injustice 2. It was much quicker to learn how to pull off on-the-fly tag assists and continuously punishing combos with my favourite pairings due to the undeniably streamlined inputs and auto-combos (to better suit a gamepad over joystick). You can easily pull off a ground-to-air combo by simply button-mashing light punch, for example, whereas in past titles as recent as MCV3, there was a lot more button combinations and decent muscle memory needed to pull of anything substantial.

The more accessible gameplay and low learning curve is something both casual and hardcore fighting game fans need to consider before purchase, but that’s not to say the more skilled players will be left out in the mud. I experienced plenty of advanced combos and tactics still employed effectively against me online, such as the new Counter Switch mechanic, which my opponent used to tag in their unused fighter to allow their main a chance to escape my flurry of punches and counter to great effect with a well-timed and unexpected surprise combo. In past MvC games, players would have to wait for the combo to end or be screwed up to escape, and the ability to interrupt an overly aggressive player is definitely a good thing. 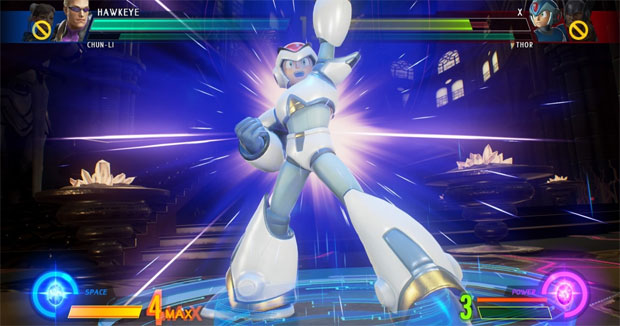 Before every fight at the character selection screen, players must also choose one of six Infinity Stones to equip, a new gameplay mechanic which also happens to be at the center of the main story and which Marvel Comics fans will be intimately familiar with. Each stone imbues its team with different powers, unleashed as an Infinity Surge and an Infinity Storm. The former is a general attack that charges the Infinity meter, and the latter can be unleashed once the meter is at least half full to devastating effect (and to unlock Hyper Combos). The different Stones were interesting to experiment with and feel decently-balanced – I found Time to best suit my play-style, phasing through projectiles with a quick dash to punish overly annoying zoners online. I’ve seen some players basically call each Infinity Stone ability a substitute for a third player, and I kind of agree, as I’ve seen some fairly unstoppable pairings mixed with certain stones online.

Capcom is on the back-foot at the moment with their second-most popular fighting game franchise after the divisive reception Street Fighter V received last year for its lack of offline game modes and barebones content – and to their credit, Marvel vs Capcom: Infinite has launched with a decent amount of offline and online modes to engage in. There is the traditional Arcade Mode and Training Mode, though the former is a fairly boring climb to a standard boss fight with no unique cinematics to drive players towards completion. The casual and ranked online match-making, where you can test your mettle against players worldwide, worked for the most part. The included Mission Mode, which teaches basic and advanced gameplay and combo mechanics with different characters, didn’t feel nearly as robust as other fighting games such as Dead or Alive 5 or even Capcom’s own Street Fighter, however. 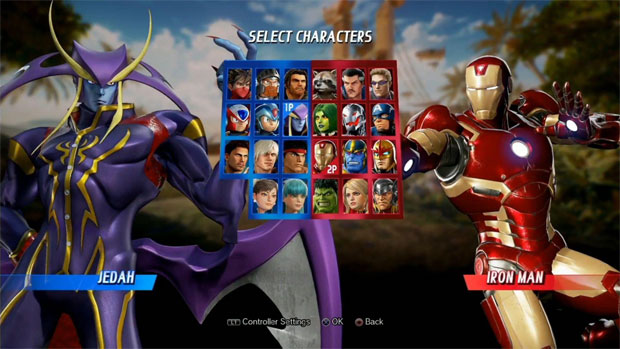 The complexity is still there for those who wish to master Capcom’s intricate fighting game systems, and experienced veterans will still whoop a button-masher like they should. I do readily admit, however, that I selfishly appreciated the increased user-friendliness just so I could jump in the game whenever I felt like it without getting thrashed and get through the story as fast as possible.

I do wish I say wanted to smash my way through Infinite’s main cinematic story mode because I was hooked on the storytelling, but unfortunately it is the opposite which is true. Ultron from Marvel and Sigma from Mega Man X merge themselves and their universes in an event called the Convergence, and the heroes and villains from both worlds are already fighting together by the time we jump in. Immediately I felt the wider details were far too rushed, the voice-acting stilted, the dialogue cringe-worthy and the forced pairings and scenarios overly concerned with providing fan-service moments rather than genuinely well-written narrative development. Whereas Infinite performs so greatly in gameplay mechanics, it falls apart the moment you try to enjoy its attempt at a cinematic story. 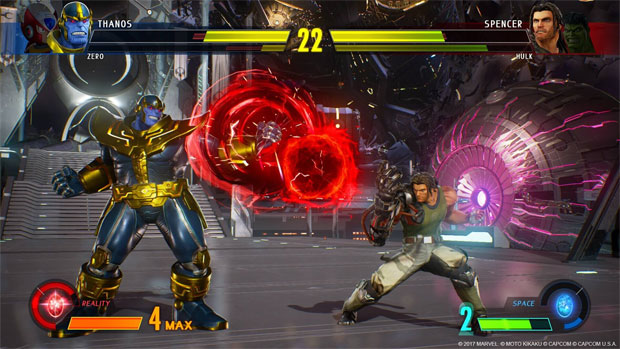 At some point I realised the lighter tone and ‘fun’ approach to the overarching story would probably appeal more to other players than myself, but it’s hard not to severely dislike the lack of any cleverness or effort to explain or justify the reasons behind the majority of the fights or pairings – yeah, okay, Ryu and Hulk are cool together, and A.I.M. and Umbrella just so happen to team-up, sure. There are, however, plenty of cheesy jokes (Iron Man is a particularly guilty offender here) and a few attempts at some twists and turns throughout its two-hour run, but most fall flat. One of my only highlights was hearing T.J Rotolo voice underrated Capcom hero Frank West again after being recast in his own main series (ouch). In all honesty, I would have much preferred more effort in providing story tidbits in the Arcade Mode like fighting games of past than what we have been given here.

The 30-character roster of MvC: I cannot be discussed without pointing out the obvious; none of the X-Men or Fantastic Four are in the game anymore, owing to licensing issues between Marvel, Fox and Sony. Newcomers Carol Danvers from Captain Marvel and Gamora from the Guardians of the Galaxy aim to make up for the significant omissions of our beloved mutants, Capcom does its part with Jedah from Darkstalkers (the only character in the game with decent design and voice-acting) and X from Mega Man, but they feel like artificial padding. It’s obvious some of the Marvel choices were due to the popularity of said characters in their recent films, but none of them (no matter how cool Jedah is) can truly fill the void the X-Men and Doctor Doom left behind. 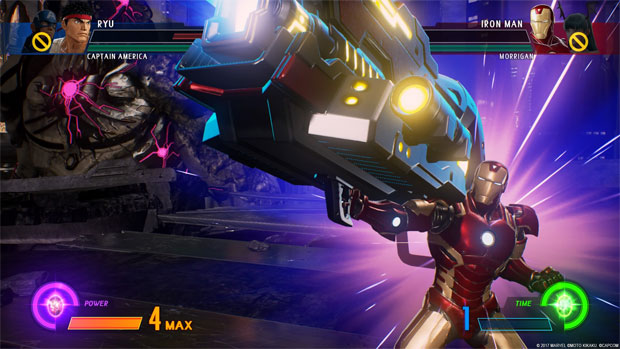 That nitpick wouldn’t be more of a problem if the cool factor of the current roster wasn’t so dampened by the general aesthetic and the strangely unappealing character designs which look at their worst during main story cutscenes. The graphics itself are adequate and colourful and mostly suitable for its comic-book crossover premise, but the faces of certain fighters such as Captain America and Dante range from alien to down-right ugly, and I don’t think it’s entirely a result of the art direction, given the low production values of everything from the stage backgrounds to the super animations to the menu screens. Even the music isn’t catchy this time around, and the battle call-outs are mostly on the cringe-worthy side.

Marvel vs. Capcom: Infinite is a serviceable, albeit disappointing fighting game release in 2017. It’s a bit of harsh statement, but after spending dozens of hours fighting my way through its cringe-worthy 2 hour main story mode, average arcade mode and various “okay” online options, the solid gameplay mechanics are not enough to salvage the mediocrity of its character designs, bland attempt at cinematic storytelling, mediocre roster or terrible voice-acting. In a year where we’ve received Injustice 2, which improved upon its predecessor significantly in both the narrative and visual departments, Capcom and Marvel’s latest crossover effort just doesn’t put up a good enough fight to dethrone Netherrealm and DC, or any other recent fighting game for that matter.

As a casual MvC fan, I fully acknowledge veteran long-time players will probably be happy enough with the solid fast and frenetic fighting mechanics and online modes, but when other fighting games also offer up more compelling single-player content and main story modes, it’s hard to recommend to other casuals or newcomers over earlier releases this year which do better in all areas.