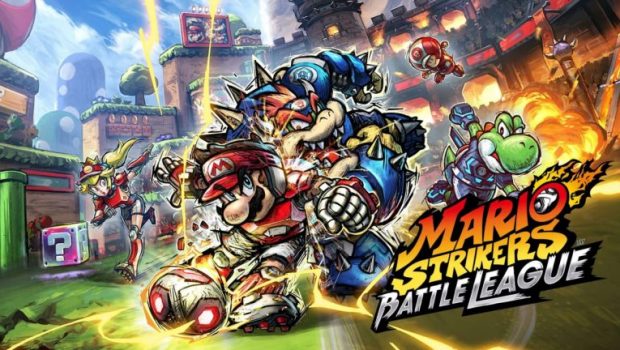 Summary: More a fighting game than sport experience, a solid presentation somewhat compensates for its limited modes and roster.

A whopping 17 years since its initial GameCube release, Mario Strikers re-emerges on the Switch with some slight upgrades. ((Reviewer disclaimer: I did not play the original, so I’m going into this one (for better or worse) with fresh eyes.))

The most obvious first impression of Mario Strikers Battle League (‘MSBL’) is that it barely a soccer game. Yes, there’s a ball, a goal, and a keeper, but that’s pretty much where the actual soccer begins and ends. MSBL resembles Super Smash Bros. more than FIFA 22, as the game a series of smaller battle interactions on a soccer pitch, with power-ups and individual character skills the main key variables. MSBL strays so far from soccer, that special moves (known as ‘Hyper Strikes’) are executed via grabbing and throwing a ball on net, obviously a no-no under traditional soccer rules. 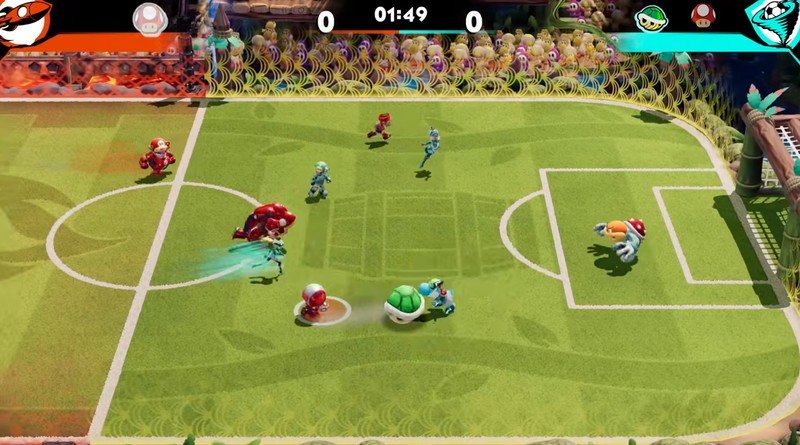 The battle aspects of MSBL are done quite well. The game is mainly a 5-on-5 contest, a series of mini battle interactions (tackles, dodges, passes and shots) impacted by randomly appearing powerups (throwable objects, speed/power upgrades). Goals are typically scored by stringing together consecutive offensive and defensive success moves, culminated by employing a power pass/shot (maximum contact/timing) and/or power-up to beat an opposing goalie. Successful Hyper Strikes result in multiple points. There’s so much chaos unfolding on screen at once, it can be overwhelming especially on handheld. Literally every itty-bitty on-screen character is trying to outmuscle and outmaneuver the other, resulting in a loud and colorful mishmash of simultaneously engaging mini-battles. Games default to a reasonable 4 minutes each, just enough time to both keep things exciting while not devolving into drudgery if opponents mismatched.

Each of the 10 MSBL players possess unique skillsets, whereas a larger player like Bowser stronger and a better striker, smaller ones like Toad or Peach speedier but with higher technical skills. Then there’s the balanced types like Mario or Luigi, for instance. Notably, Rosalina (of Super Mario Galaxy fame) makes her first Strikers appearance, and does so with strong kicking ability. Player archetypes aren’t always a logical fit, however. For instance, Donkey Kong is a surprisingly adept passer for a guy his size, where Yoshi strangely pretty slow. Boom Boom is the default goalie…a bummer as it would’ve been cool to have more options in net. Related, MSBL has a very cool system of gear upgrades (purchased by coins obtained from victories) that augments one skill at a cost of another. This risk/reward system pays dividends at higher difficulty levels, where selecting the right roster and gear can be the biggest make or break factor. 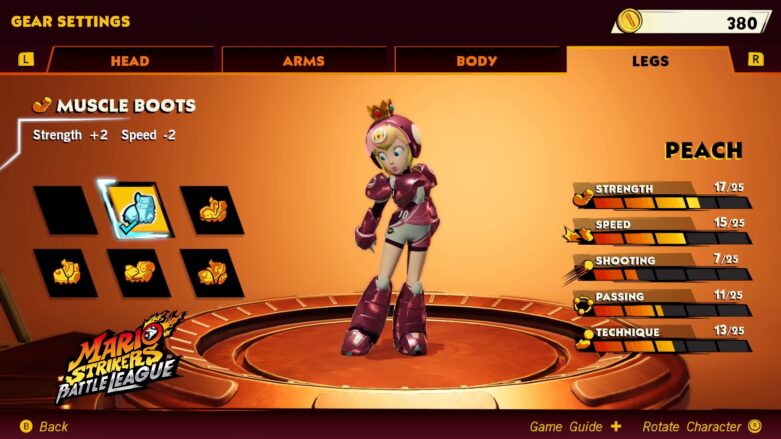 Speaking of handheld, MSBL is absolutely gorgeous on OLED, albeit hard to see such small guys/gals. Character models are beautiful, stadiums sharp, and cut screens stunningly rendered. There’s also highest attention to humor and character nuance, reflected by hyper strike cut scenes, hilarious goal celebrations and on-screen sound effects. While not many to choose from, kits are snazzy and unique, as are the aforementioned gear upgrades (sporting both form and function). Another strong suit of MSBL are its easiest to navigate menus, something other Switch sport titles can use some help in. Additional kudos for the excellent albeit loooooooong tutorial.

Still, MSBL game modes are a bit lacking, limited to exhibition, tournament and online leagues (‘Strikers Club,’ where a custom player joins up with others to form teams and compete). I don’t trust Switch online capability worth a darn, so – while a cool concept – I’m not optimistic about longer term execution of this final mode except in local wireless mode. The limited player roster also becomes obvious with such few modes at one’s disposal. 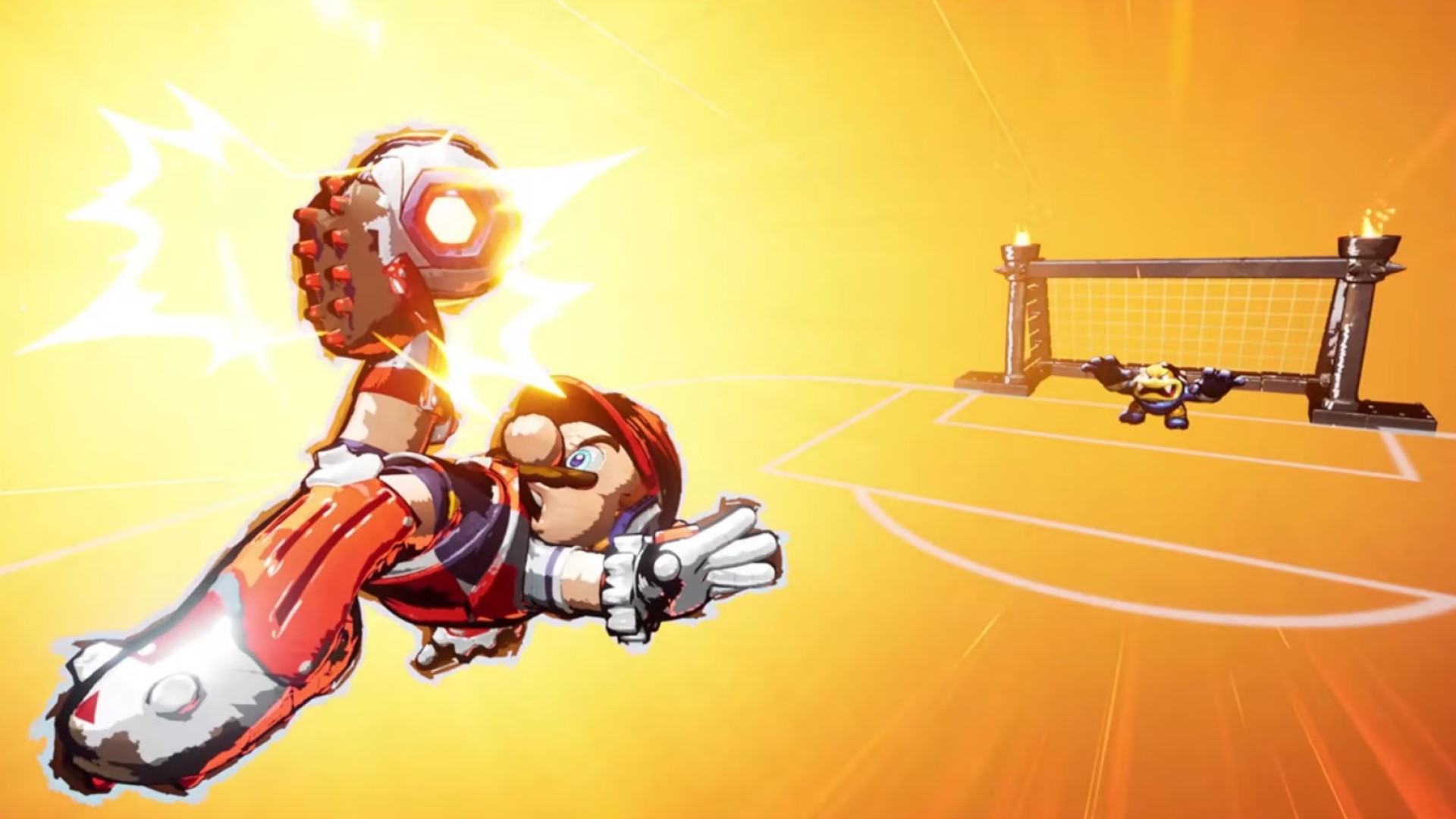 My biggest criticism of MSBL is that – unlike Mario Golf and to a lesser extent Mario Tennis – there is such a disconnect to the sport it seemingly trying to represent it borders on disappointing. In its stead is a colorful whirlwind of mini battles and accompanying audio that – while entertaining – lacks the player roster and mode variety to keep it interesting for long. I was longing to play a simple game of traditional soccer, resembling old school Nintendo Ice Hockey with over-emphasis on archetypes but at least some true pace/strategy.

In saying this, I’m certain fans of the original Strikers are going to discount everything in the previous paragraph. Much like Blood Bowl inspired by but not intended to be American football, so too is MSBL to soccer. It’s a solid albeit limited (in characters, modes) portable mini fighting title with a nice sport twist that is presented very well. Plus, I’m always a fan of any portable title where a true game can be had in under 5 minutes time.

Mario Strikers Battle Leagues adds a few new wrinkles to the original Strikers formula, and does in a tight and well-presented package. While it may disappoint those expecting more variety and a soccer component, fans of Nintendo fighters and the attack/counterattack battle system genre will feel at home here.