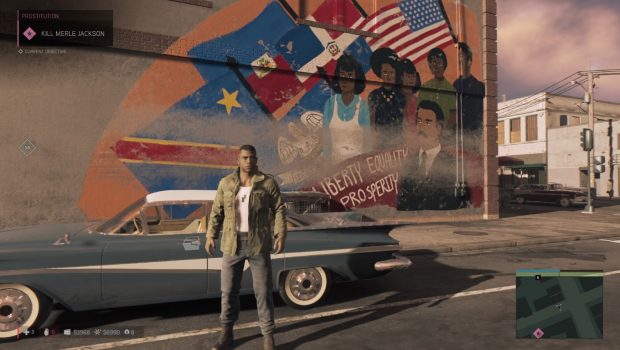 Summary: Mafia III is an engaging narrative with a sadly incomplete system, padded out by repetitive missions and tiresome collectables.

We exist in a tenuous period where the validity of certain types of cultural work (among other things, like basic human rights) is, unfortunately, still being debated. Ironically, this is an issue tangentially touched on within Mafia III: is black culture of equal value to white culture? It seems that some five decades has not been enough to equalise the playing field. Mafia III ostensibly represents the past, but the parallels with our present are stark and demoralising. 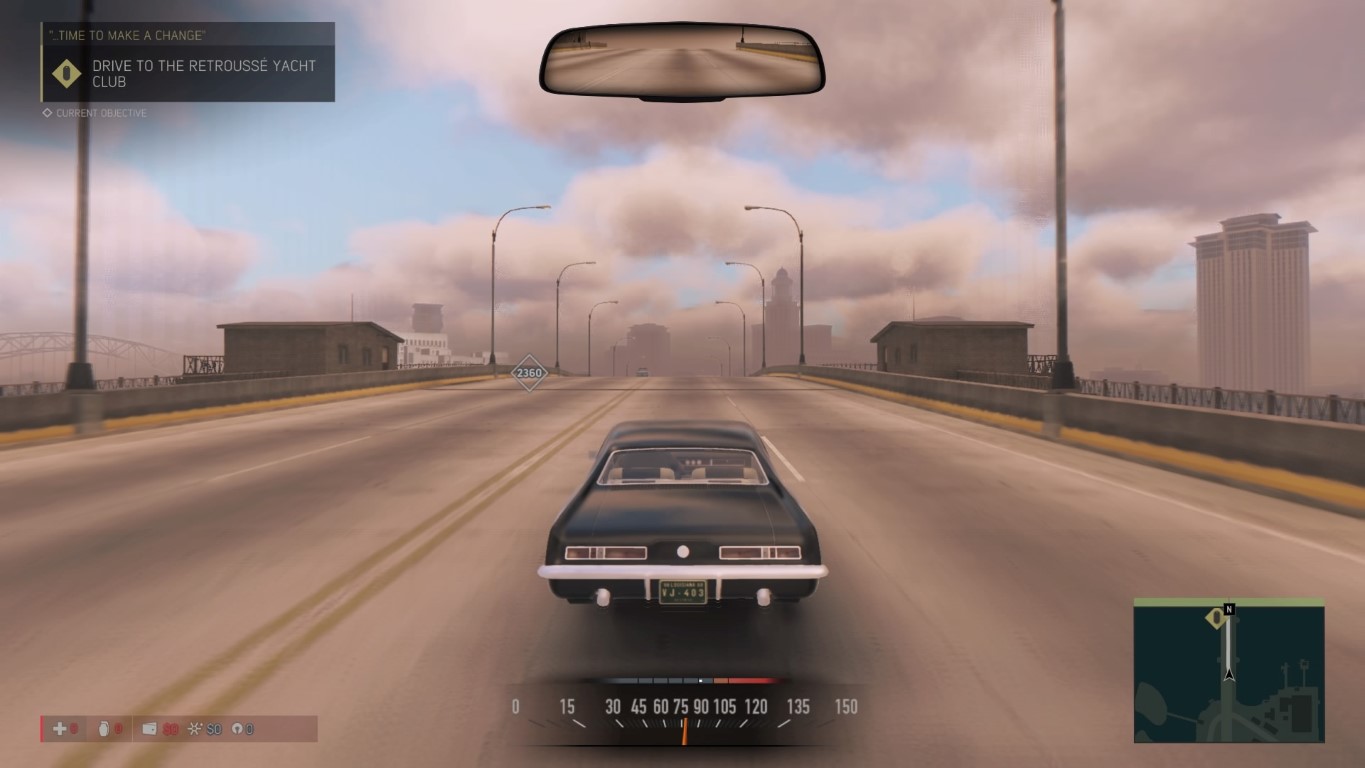 There will be Mafia III detractors who conflate legitimate issues with the decision to portray a black protagonist, making it a debate about non-white protagonists when it should be about the game’s other issues. Because of this, I feel a kind of moral obligation to defend the merits of Mafia III—even despite numerous personal issues with the game. If I do not, then it might seem easy for people to dismiss what is a (minor) victory for diverse videogames as some kind of “evidence” that diversity is an obstacle to the success of videogames. But that solves nothing: to do the opposite—to suggest Mafia III is superb based purely on premise—only contributes to the unhealthy, arbitrary dichotomy. Instead, I will do the logical thing: articulate both the positives and negatives of my time as Lincoln Clay.

It is impossible for me to discuss Mafia III without also acknowledging its similarities to the Luke Cage TV series. Both star a man driven to vengeance after having tragedy inflicted upon them in a place of safety. Luke Cage is caught in the crossfire at Pop’s barber shop, where his friend and mentor is slain; Lincoln Clay narrowly escapes death when the Italian mob betrays the black mob in the de facto headquarters. From here, each sets out to dismantle the criminal organisation by first hitting minor targets. I am thrilled to see two prominent, black narratives published at similar times—though this raises other points of note. The most tragic of these is that the existence of a measly two black narratives is apparently a cause for joy; it should not be noteworthy that we have diverse characters on screen or in our games. 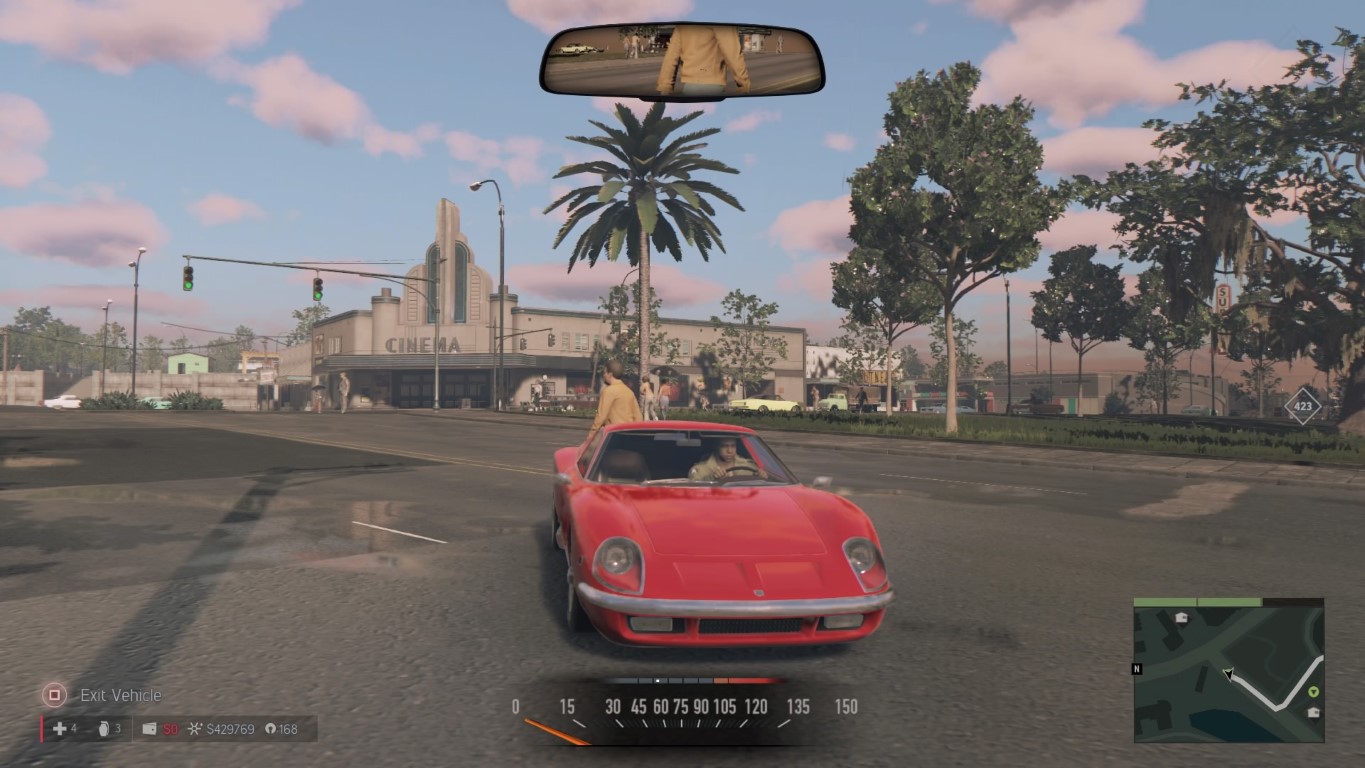 But perhaps the more harrowing: these two tales share a great many similarities. But is this the only black narrative that we have? The angry black man driven to revenge is not the sole story to be told; and while I appreciate that we have any black narratives, I would like to have variety. Until the weird, drastic pushback—like Luke Cage being labelled racist for a ‘lack’ of white characters—ceases, this hope may take time to become reality.

But we have this narrative: Lincoln Clay, a black man in the Deep South in 1968, dismantles the local Italian mob by violently stabbing or shooting scores of men in the face. This setting is important: it’s a tumultuous time in history, particularly for Americans of colour, and the systemic racism is showcased throughout Mafia III. Storefronts have ‘No Colored Permitted’, citizens casually sling slurs, police prioritise crimes in white neighbourhoods. At one point, the police chief—leader of an all-white police force—actively calls for the brutalisation of black citizens. 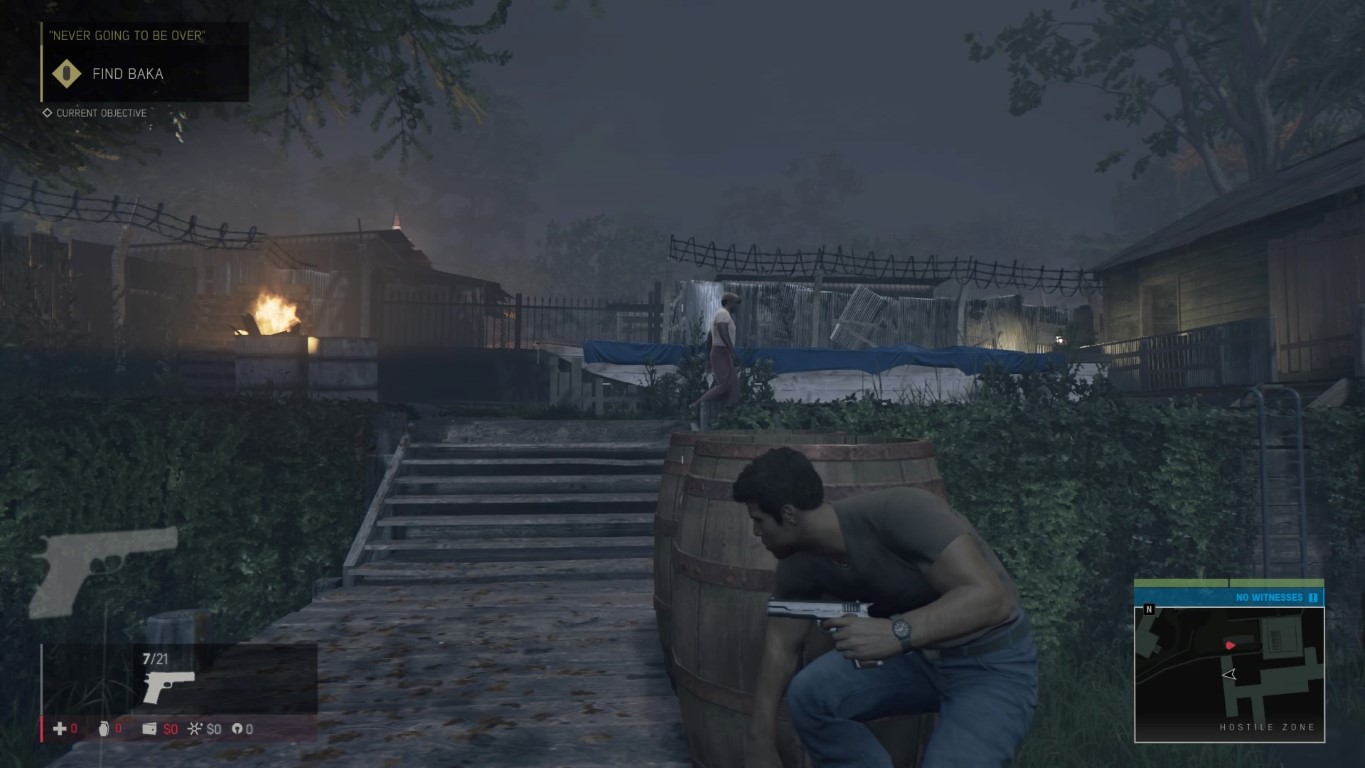 Incidentally, it is remarkable how quick to open fire police are for even minor crimes; crash your car into a parked vehicle next to a police officer and he will open fire. Whether this is a direct reference to the glut of police murders of black Americans or not is uncertain, but it speaks volumes that a potential game quirk is the same as our reality.

But there are some surprising absences that leave this systemic racism feeling a little less systemic. In previous Mafia games, speeding attracts the attention of police: Lincoln is free to drive 100 miles per hour through red lights, so long as he doesn’t hit anything. ‘Loitering’—code for being black in a store that is white only—is a crime, but jumping fences in a white neighbourhood in the middle of the night or getting into a posh car are not suspicious enough to receive police attention. The lack of consistency means that what few racist mechanics do exist are undermined. When contrasted with previous Mafia games, it doesn’t seem like the rules aren’t stricter for Lincoln because he’s black; it just seems like a lucky dip bag to see which laws are relevant. 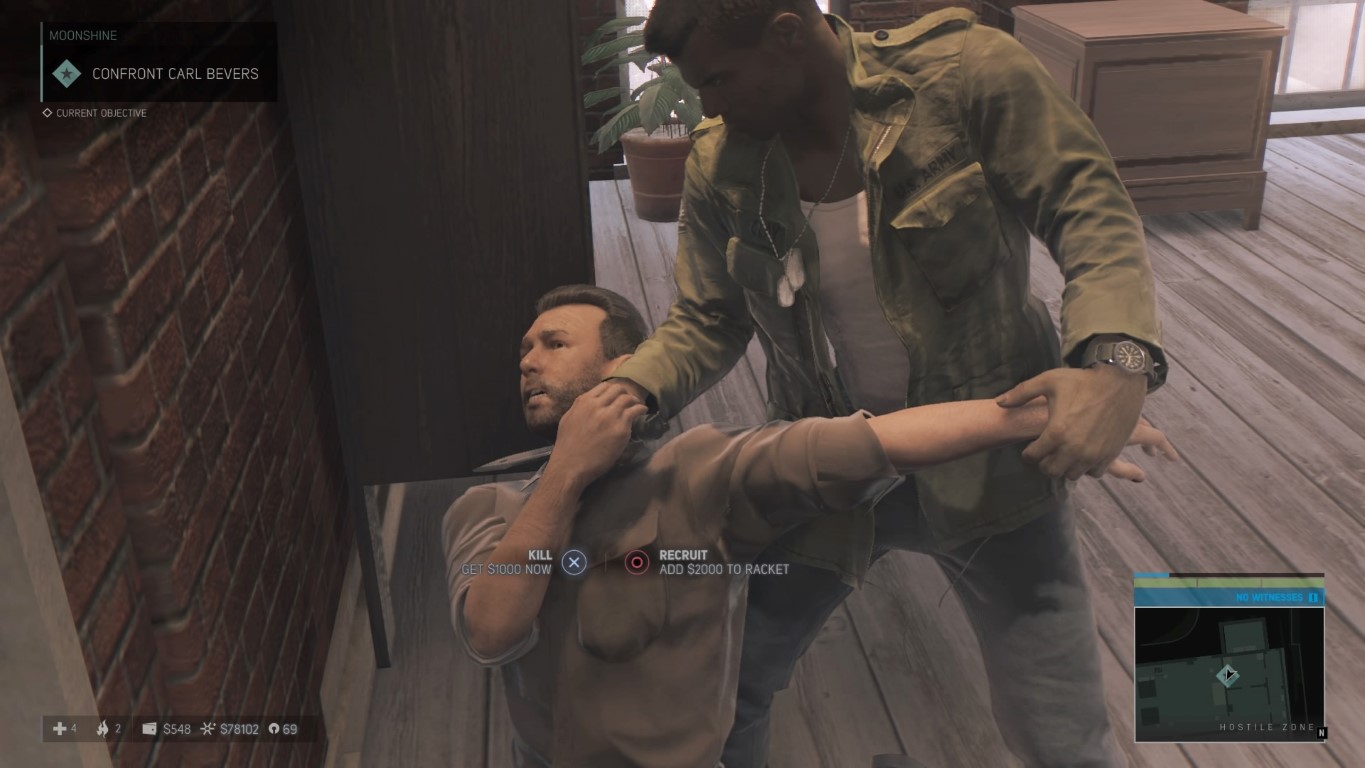 In many ways, the world of Mafia III lacks internal consistency. At one point, I stole a vehicle that a NPC was about to enter. Instead of calling the police, the woman just wandered off. There’s a train station in one district where a dozen people stand or sit awkwardly still for a train that never comes. Post up in a corner, and Lincoln can lure dozens of idiotic guards to their death; even with a literal pile of corpses visible, enemies will still wander towards his whistling. One white-only pawn shop had a black NPC inside. Even the fact that literally every house I entered—day or night—was unoccupied felt unnatural. New Bordeaux is only ever a poor approximation of a real, living city.

One news story plays over the radio: two black war vets are killed by a white guy because they stood on his porch to ask for help with a flat tire. Later, it is implied that Lincoln’s rampage is a direct causation for that incident—he is instilling a fear of the violent, murderous black man into folk. But there’s little actual tangible impact for the one-man rampage. Police don’t patrol in greater numbers; mob rackets don’t receive tighter security. Lincoln’s violence is, ironically, almost irrelevant to New Bordeaux. 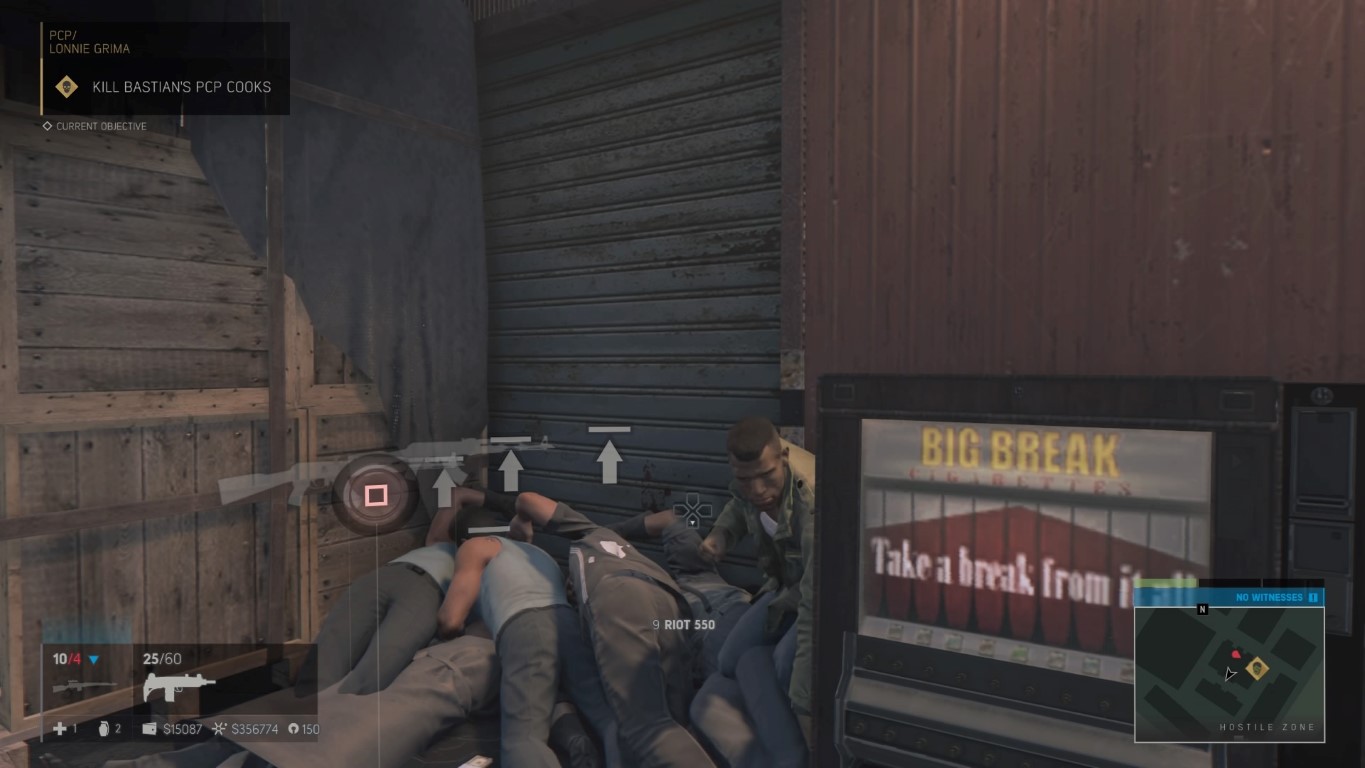 And there is a lot of violence. With stealth being obscenely overpowered, I spent a lot of time watching Lincoln repeatedly stab his bayonet knife into the faces of his enemies. The aptly named Brutal Takedowns are confronting. I think the two worst involve brutal takedowns with guns: they linger just a little too long, as Lincoln stares coldly into the pleading eyes of his enemy before executing them. These moves match Lincoln’s no-holds-barred approach to destroying the mob, but they also leave a lasting impression on the player.

There was some controversy about the fact that non-lethal options were buried in a menu and not enabled by default. As horrifying as the Brutal Takedowns are, they are Lincoln. Mafia III is not about the player—it is about one man, Lincoln Clay, and his bloody revenge. Every time Lincoln spares someone, he does so with good (and explicitly stated) reasons. 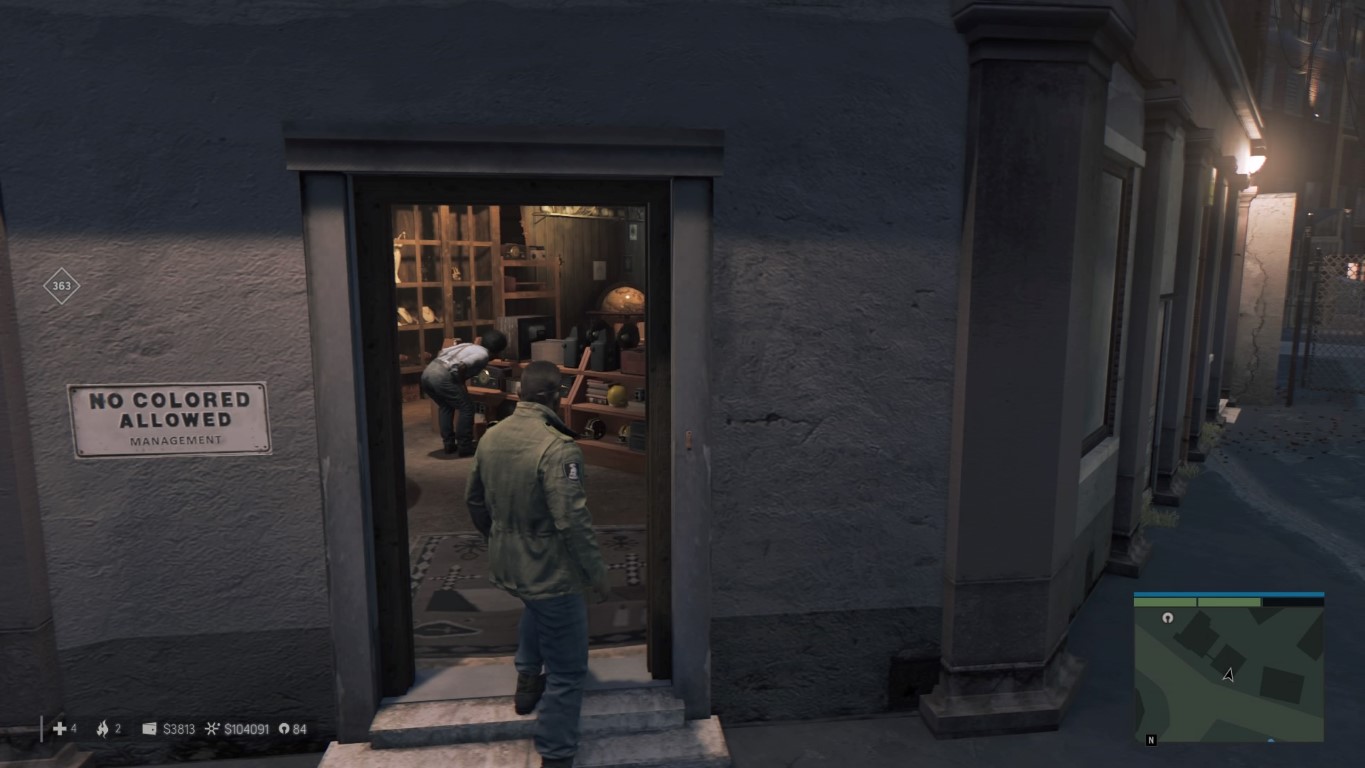 The biggest criticism I have for Mafia III is that it truly overstays its welcome. There are too many collectibles—I have 200 fuses that have literally no purpose. The actual story missions show some novel approaches—going undercover as a waiter or boxer are a nice break from knifey-shooty—but the racket missions get inanely repetitive. So much padding is plonked between the story beats that Lincoln’s PTSD symptoms felt incredibly dissonant instead of being poignant reminders of the toll the bloodshed has on the perpetrator. Which would have been nice, since Lincoln’s clothes remain completely and inexplicably blood-free despite how up close and personal he gets.

Mafia III attempts to be more than your standard open world game, by literally implementing racism as a game mechanic—and at least achieving this to a much greater degree than Deus Ex: Mankind Divided. Unfortunately, Mafia III doesn’t differentiate itself from the pack enough: the typical open world mechanics are overdone to the point of boredom and the novel, new mechanics are sorely lacking in completeness. It is not a game without redeeming qualities, but it lacks the exceptional qualities to capture the hearts and minds of many players—particularly fans of the previous Mafia games who thrived on the details missing in Mafia III. All I can hope is that Mafia III is but the first (stumbling) step in a fascinating new direction for open world games. 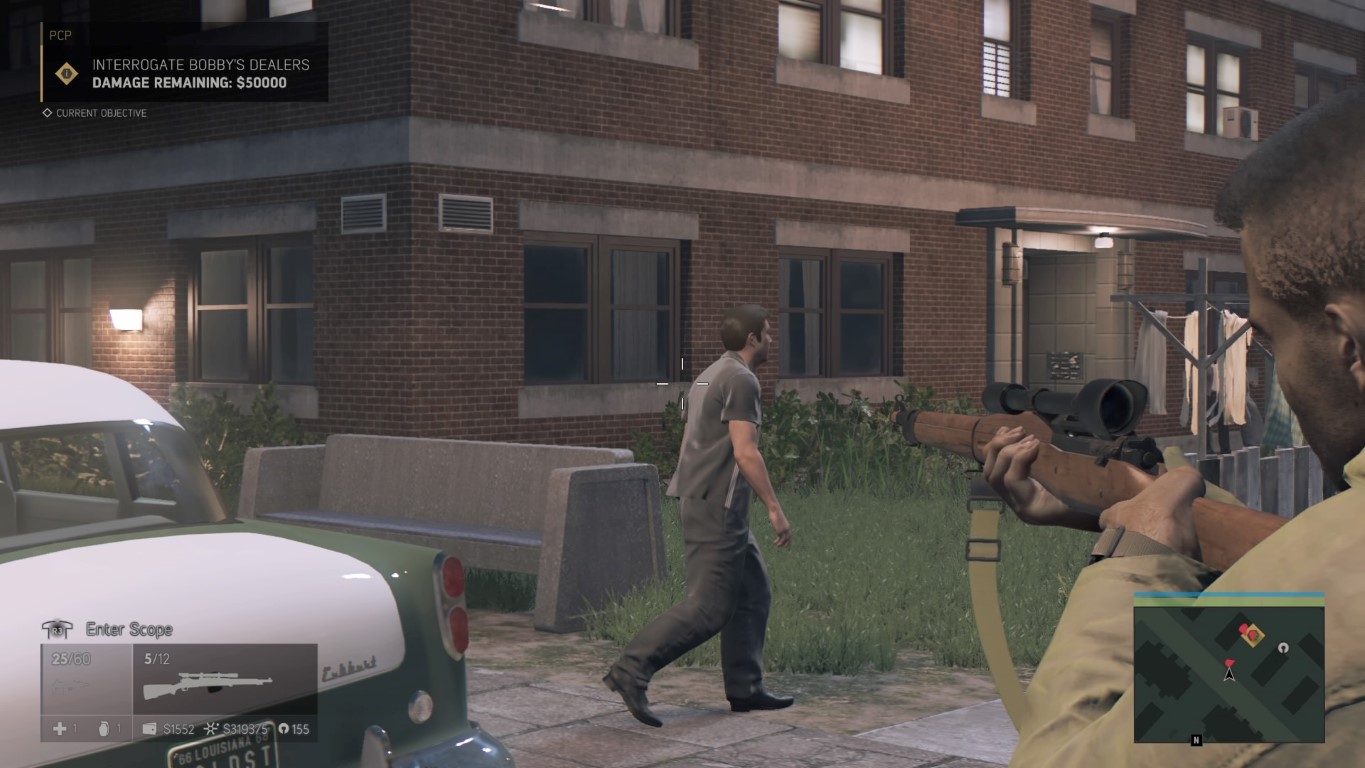