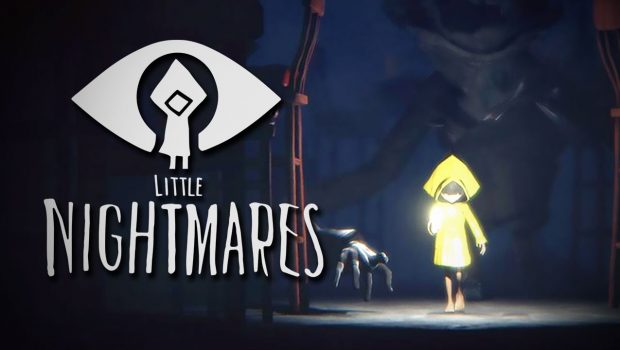 Summary: An accomplished, albeit occasionally flawed, experience, Tarsier Studios’ “little horror game that could” has turned out to be one of the more unexpected triumphs in a year filled with GOTY contenders.

Bearing more than a passing resemblance to Playdead’s INSIDE crossed with a healthy dash of Unravel, the twisted puzzler Little Nightmares thrusts the player into an austere world full of voracious fiends and twisting ventilation shafts that all too often lead to another floor of horrors rather than the freedom that protagonist Six, and by proxy the player, so desperately yearns for. 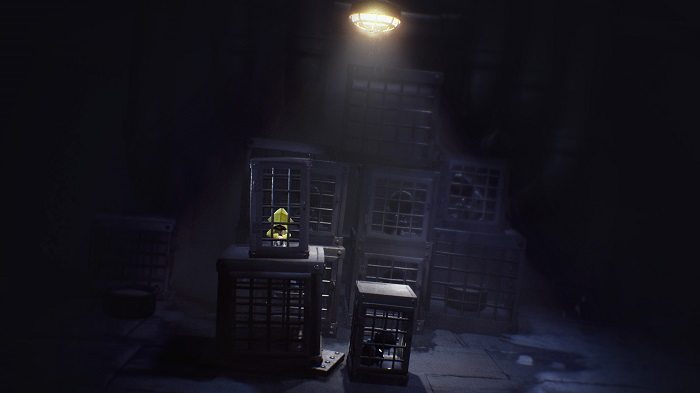 In essence your main goal is as simple as that – Escape the Maw, whatever that is, and creep your way through the shadows to the sanctuary of fresh sea air and creeping tendrils of sunlight.

Standing in your way are a handful of grotesque, contorted creatures that must be eluded and at times utilised in order to bypass traps and locked doors; the further into The Maw that Six ventures, however, you start to realise that, unlike many of the prisoners and other denizens aboard the floating slaughterhouse/restaurant-of-sorts, our heroine appears to hold a personal connection to the surreal location and the slender Geisha-like figure who appears to head the entire operation.

…But I’m getting ahead of myself a little. 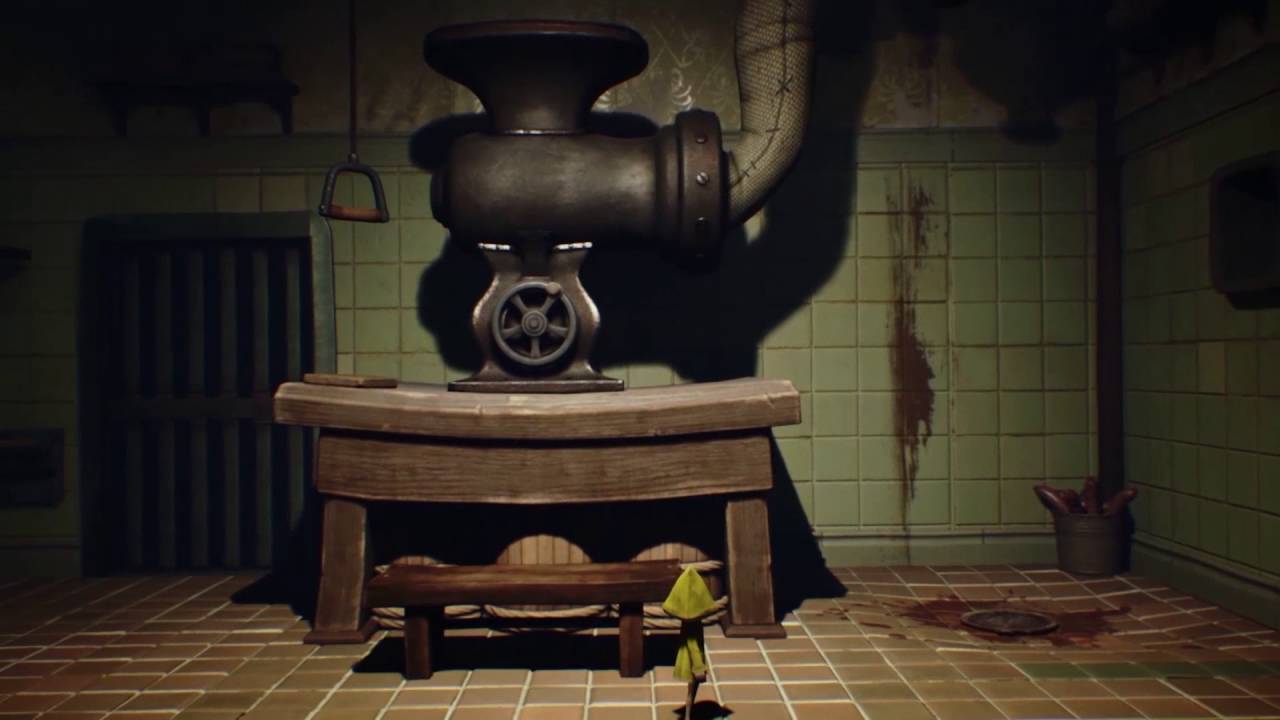 Much like its contemporaries, Little Nightmare prefers to dump the player into its world without any real explanation as to what your goal is or the context of the game’s universe itself.

This leads to a satisfying sense of exploration and discovery where you slowly begin to piece together the clues from the environment and your interactions with it, gradually revealing where Six and the place she reluctantly calls home fit together and the kind of damaged world that she lives within that would allow this floating monstrosity to exist. 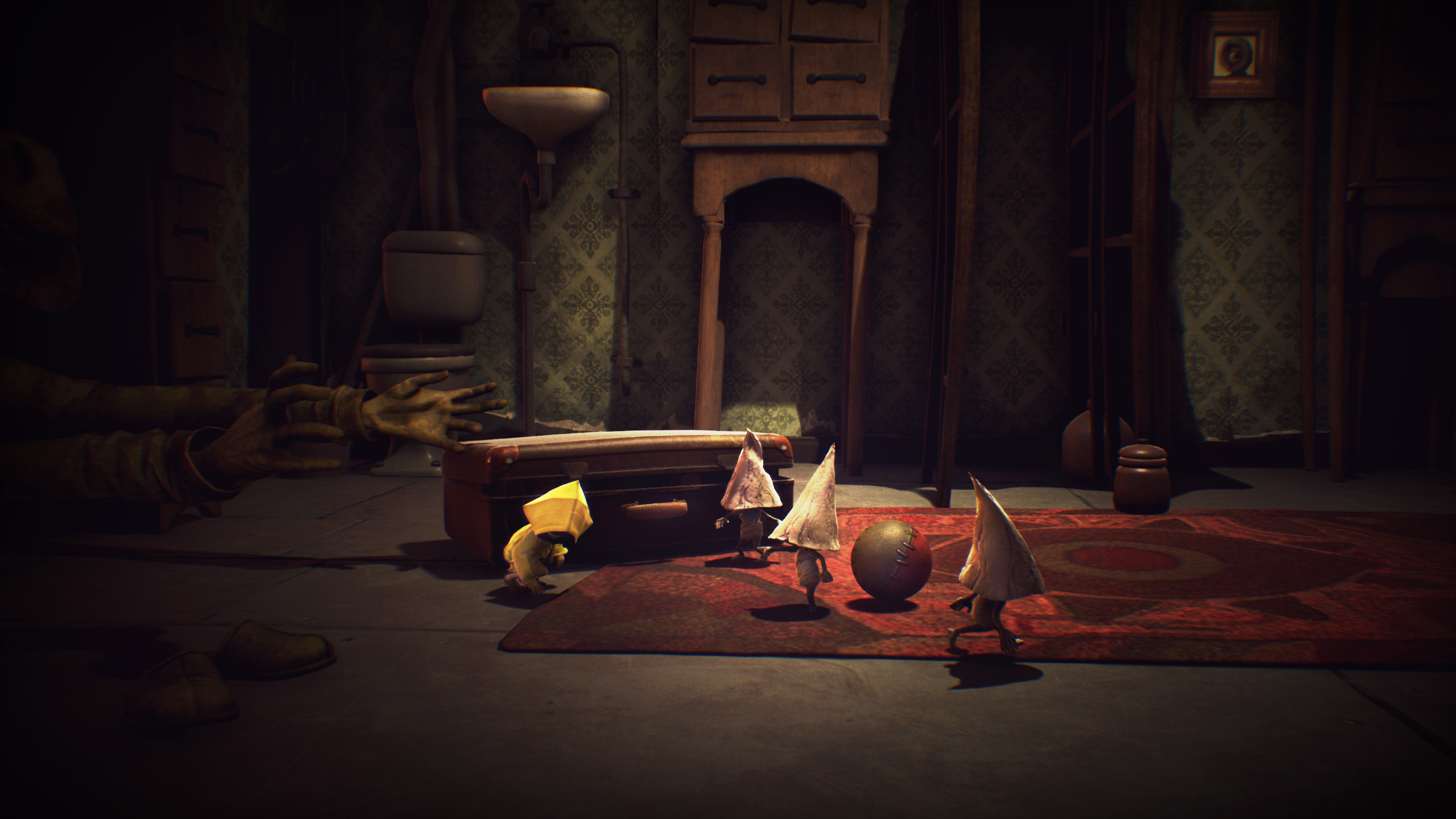 In this spirit, to reveal too much of the plot, as abstruse and open to interpretation as it is, would be to diminish what is Little Nightmare’s greatest strength – That sense of uncovering a foreign world. The game is structured in a similar manner to the aforementioned Unravel, where you progress through chapters using your noggin to overcome the physics-based puzzles that serve to impede your progress.

These can range from shutting off electrified barriers so that you can safely slip past to locating keys hidden away in the least accessible areas of the ship to scaling towers of dirty dishes in order to reach the dangling meathooks hanging just tantalisingly out of reach. 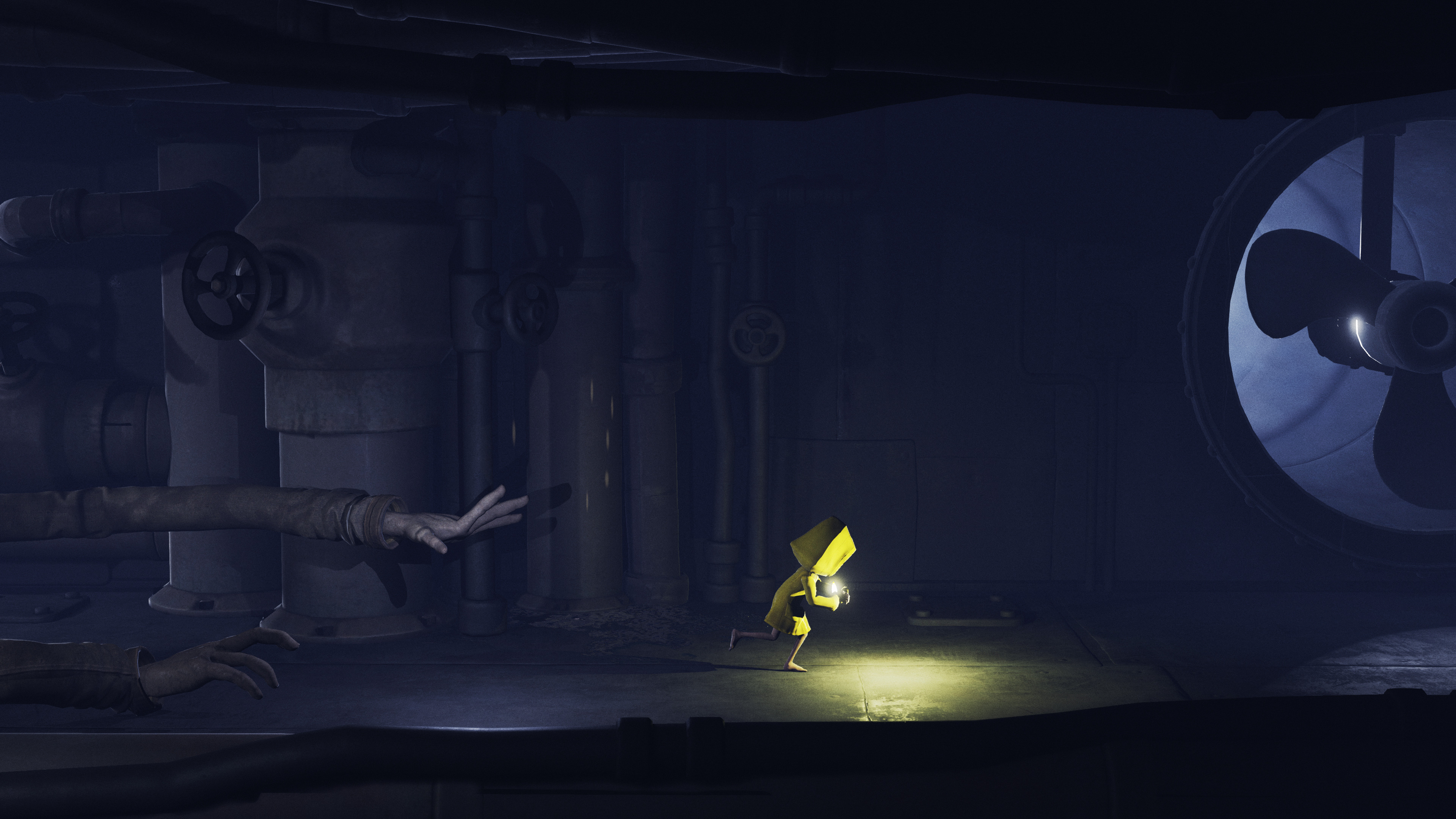 The controls are intuitive and responsive and I personally welcomed the lack of auto-grabbing onto ledges, harking back to the days of games like Tomb Raider where a well-timed tap of the shoulder button was often all that stood between safety and plummeting to your death. The platforming can feel a little on the floaty side, however, and the 2.5D perspective also inadvertently contributes to more than a few deaths due to uncertain positioning.

The gameplay generally boils down to alternating between the more considered puzzle sections and the frenetic bursts of action that comes with the multiple moments of sudden pursuit; whether it’s accidentally catching the attention of an entire room of gluttonous beasts enjoying a lavish feast or ducking and weaving through an expansive kitchen as the chilling squeal of a furious butcher closes in on your location, these moments are suitably harrowing and get the heart racing in the desired way. 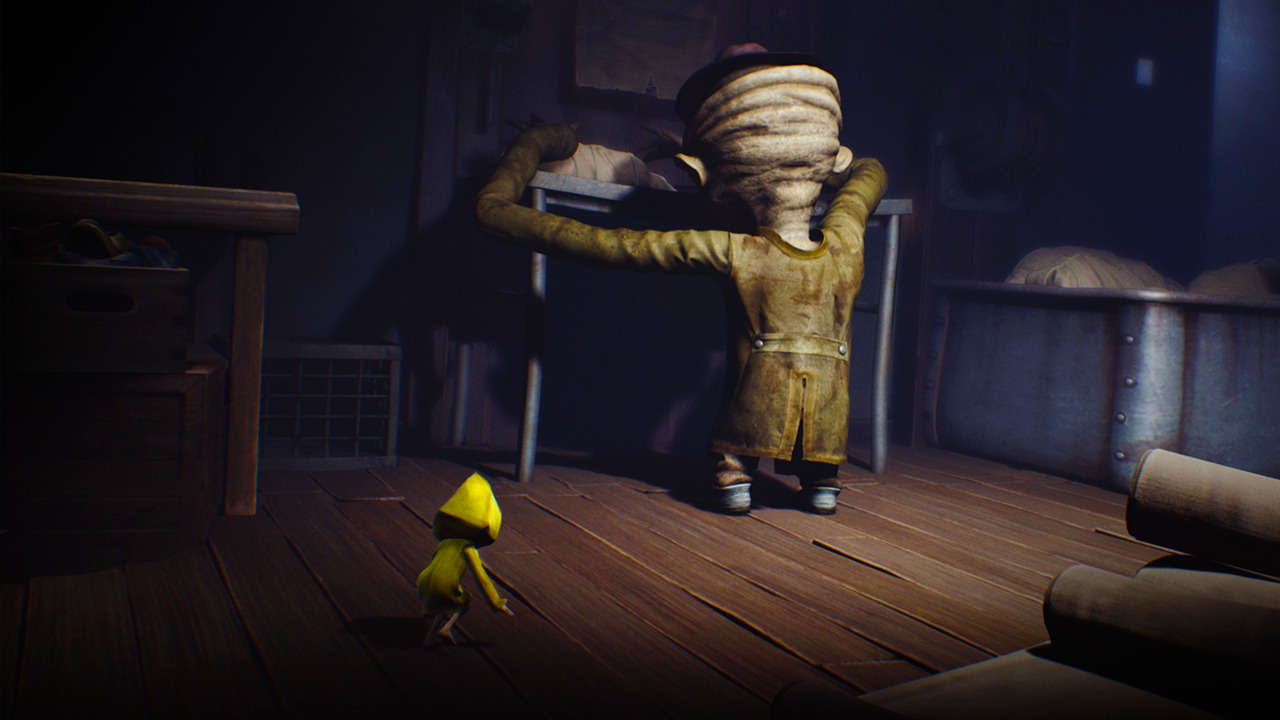 However it’s these moments that also reveal Little Nightmare’s most frustrating element – The trial and error nature of certain sections. Being forced to blindly run into an area time and time again only to be subjected to death before you can adequately scan the room and figure out your next move can quickly become infuriating, especially when death comes so easily in this game.

Thankfully these moments are few and far between and, for the most part, Little Nightmares balances the difficulty incredibly well, with every puzzle feeling logical and rooted in the world of the game, free of any glaring “VIDEO-GAME PUZZLES” to break your immersion. 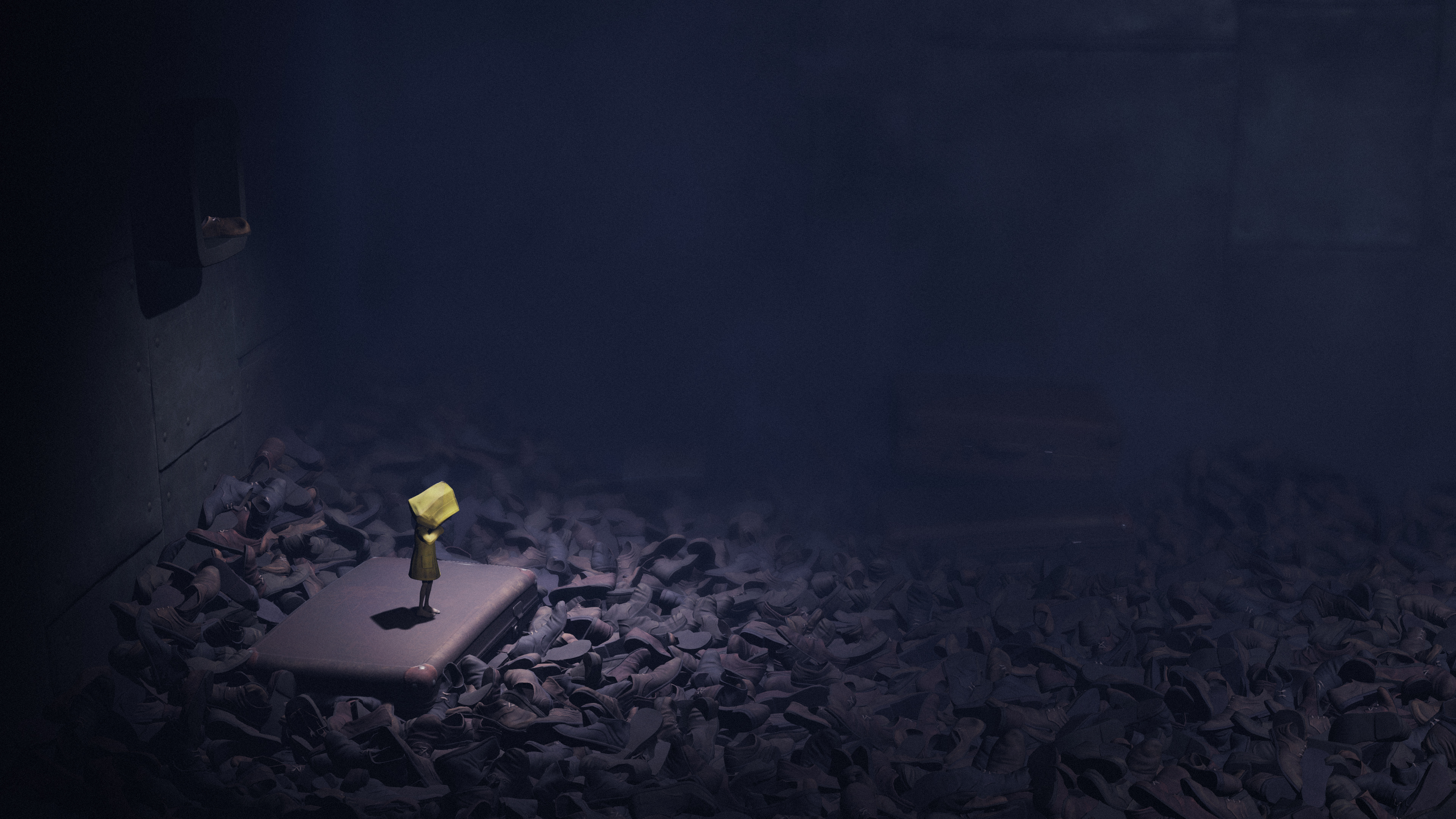 Little Nightmares has a delightfully dark yet endearing art style that’s evocative of the stop-motion animation of Tim Burton and Henry Selick, particularly in regards to the creature designs. There’s also a definite Spirited Away influence in the final area during the feast sequence that adds a nice shift in aesthetic after hours spent in the bowels of The Maw.

The sound design and music is also creepily effective, with the chilling singsong theme that plays over the moments that Six feeds being a clear standout. The creaks and groans of The Maw as she rolls over the waves adds to the atmosphere and the blood-curdling shrieks and excited clicking that emits from your pursuers during the most frantic moments dials the tension levels up to eleven. 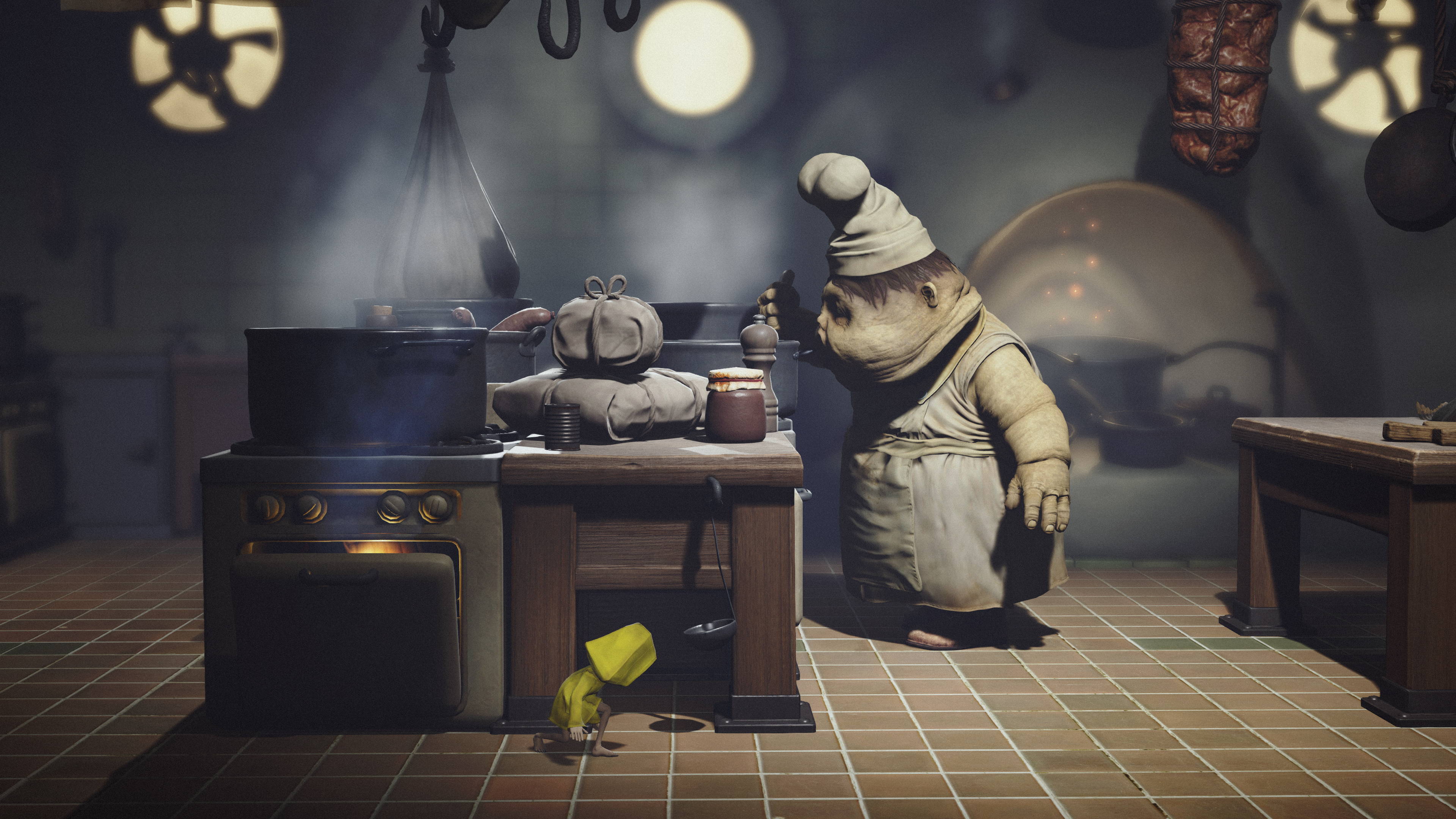 Little Nightmares is an effective little thriller that provides a breezy four or so hours of gameplay and some of the most intense scares of the year, high praise in a year where Resident Evil VII and Outlast II have also released.

This short length might be a bone of contention for some but it ensures that the game is succinct and free from filler and doesn’t run the risk of wearing out its welcome. 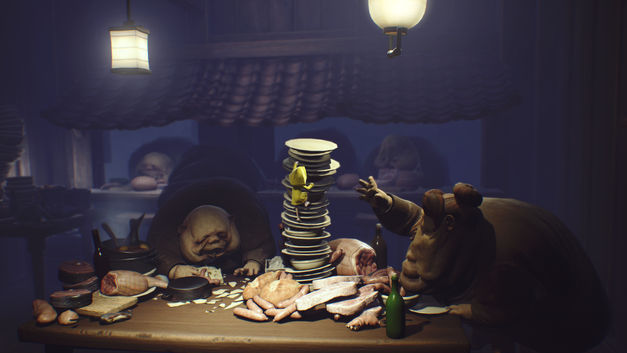 The ambiguity and intentional vagueness of the plot may not also be to the taste of some, and it must be admitted that the story itself doesn’t seem as deep or fraught with symbolism as, say, INSIDE, but your mileage will vary in this respect and I personally enjoyed Little Nightmares for what it is… The budget pricing should help relieve the sting somewhat as well. 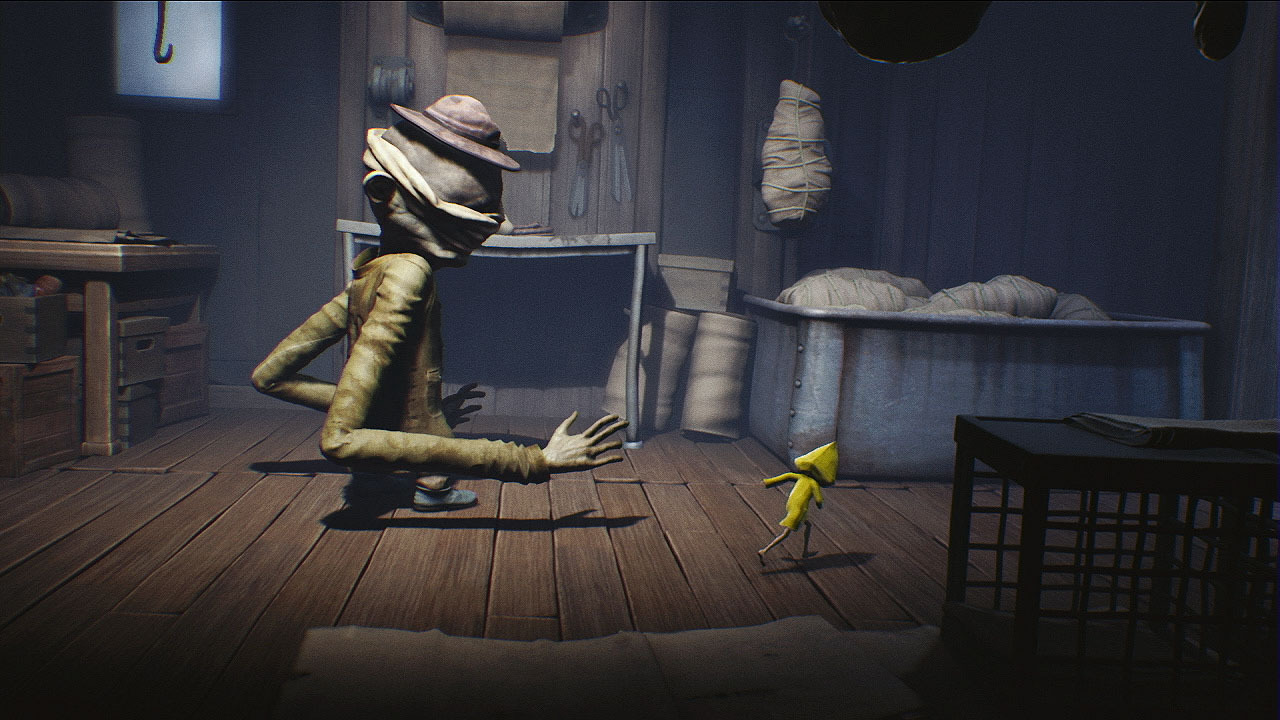 The twisted fairytale aesthetic of Six’s ascension makes for a grim descent into the lengths one will go to ensure their survival, and the little Nomes, lanterns and statues littered throughout the levels offer up the incentive for at least two playthroughs, if the tight gameplay and gloomy, dream-like storybook atmosphere weren’t enough.

An accomplished, albeit occasionally flawed, experience, Tarsier Studios’ “little horror game that could” has turned out to be one of the more unexpected triumphs in a year filled with GOTY contenders. 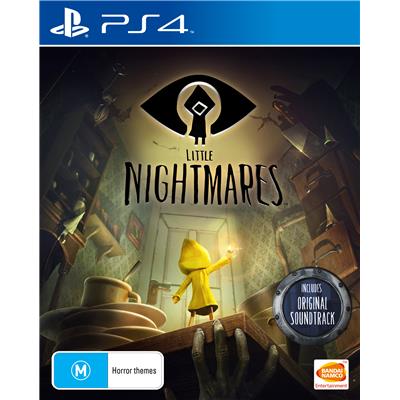