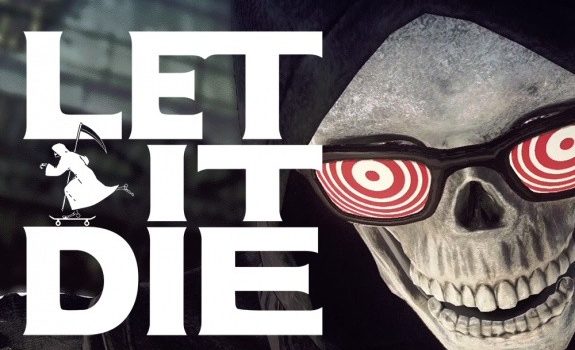 I must hand it to publisher GungHo: ‘Let it Die’ is the weirdest game I’ve ever played. That’s saying much, after I thought nothing could top the mini Duke Nukem Forever PS3 kitchen condiment fight from years past. Behold, I’ve eaten my words.

The easiest way to describe Let It Die, is it a roguelike, survival marathon, along the vein of Dark Souls. Meaning, die a lot, fight against others who died while doing so, and encounter often frustratingly difficult enemies and situations along the way.

Perhaps the quirkiest part of Let It Die is that it’s free. One can play for quite some time and never doll out a penny. Well, that is until overcome by a wave of baddies… and it’s lose all hard- earned gear and blueprints… or pay up. Even with oodles of death metal to allow continues, playing Let It Die is a constant battle of just a little bit further…or return to the main lobby and collect winnings to fight another day.

The latter, while safer, requires a fair bit of back tracking and a possibility of a wasted death in lieu of seeming conservativeness. See, one never knows when the ghosts of fighters past (‘haters’) will be placed within old levels. I found out this the hard way, as would-be-heroine (‘Eva’) returned to a once easy level, only to be annihilated by a hater exponentially stronger than her. I proceeded to waste two prized death metals to solely overcome this new irritant. So much for risk aversion.

Let It Die’s plot is straight out of post-apocalyptic fiction. In 2026, the world goes to heck, and a Tower of Babel like structure appears in the new South West Tokyo. This tower promises riches at its top, thus lures adventurous types from all over the word to try his/her hand at grasping the brass ring. The Tower of Barbs is death at every turn, riddled with demons and bad guys of all shapes and sizes, to include aforementioned insane versions of now dead adventurers. 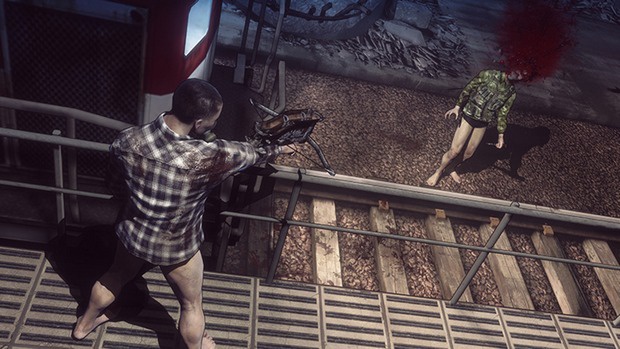 Your guide is ‘Uncle Death,’ a peculiar Finnish grim reaper-slash-skate boarder who seems more appropriate for Watch Dogs 2 than the apocalypse. Still, gotta’ love the guy’s biting sarcasm and his affinity for death. The morbid realization that Let It Die is a lesson not in survival rather what happens in between death is omnipresent.

Adding to the weirdness is that this exercise is actually a game…within a game. Meaning, your heroes will live and die, but do so trapped inside an arcade where other players provide tips and/or quests. There’s nothing like knowing your mortality is literally entertainment fodder for others…who remind you of this reality by being both helpful and dismissive.

As only Japanese developer Grasshopper Manufacture can (kings of the ironic morbid), all tutorials, videos, and sister game aids further the creepy factor, and enhance a seemingly hopeless atmosphere. Literally every NPC is either crazy and/or ambivalent to your demise. And these are your friends, mind you. The mushroom lady is flat out nuts and awesome.

Let It Die, per above, is damn hard. In exception to some low-level enemies who swarm versus intelligently counter, everything can and will kill you. Camera angles don’t help matters, often in the wrong place to accurately assess where essential rolls and evasions take place. This becomes especially problematic when enemies start chaining attacks. Throw in 2-3 bad guys, a bad camera shift, and it’s another death metal down the drain. 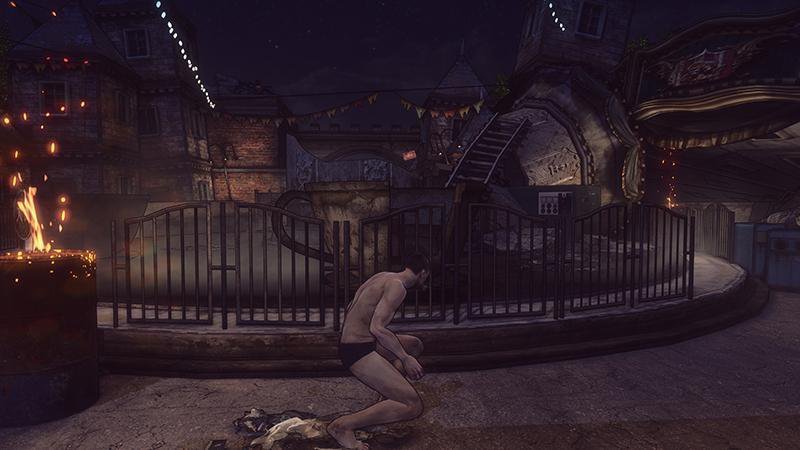 Another glaring issue is the non-intuitive inventory management system. With all that fighting going on, switching between weapons and gear is a must. This becomes a tedious chore, however, as gear won’t auto-populate, weapons rotate intelligently (i.e. a damaged one of the same kind for a new one) or replace when destroyed (i.e. a new head protection for one just totaled). As our hero can only hold up to 20 items, this means going back and forth into the inventory management system at the worst of times to stay alive. Enemies, unlike in The Witcher 3, don’t wait on you to sort things out. Ergo, become really good at near naked, hand-to-hand combat.

Further, it simply makes no sense why small items count as large ones. Blueprints should not hold a similar weight penalty to a giant combat pickaxe…but they do. And in the grand scheme of things, said blueprints are a lot more essential in the long run. Endless tear gas mushrooms via stomped , frogs end up being a wasted, prized bag slot of 20. Decisions, decisions.

Perhaps most importantly, Let It Die is arguably too clever for its own good. Figuring out how to harvest, cook and manipulate mushrooms is not easy. Ditto the blueprint and R&D system, likewise leveling up, quests, generating new characters, defending your waiting room, navigating the information system, and other game nuances. Yes, there’s a tutorial. Still it falls woefully short.

I’m not saying these can’t be overcome. Still, for a free at first and ultimately monetization-centric title, most will abandon hope and interest long before any semblance of what’s going on emerges. Factor in the highest difficulty, and only the most dedicated are apt to stick around.

Thankfully, publisher GungHo recognizes this, to an extent. They offer oodles of free items, continues, upgrades, and related survival tools as dangled carrots. As a reviewer, I was bestowed a guilt inducing stash of such goodies; I’m not sure I would’ve stuck around otherwise. Once competing players start picking off my underequipped waiting room (via its multiplayer mode), I can’t even imagine how frustrating this gets without all the free help. Note: The ideal Let It Die upgrade pack is $33US at the PSN Store. 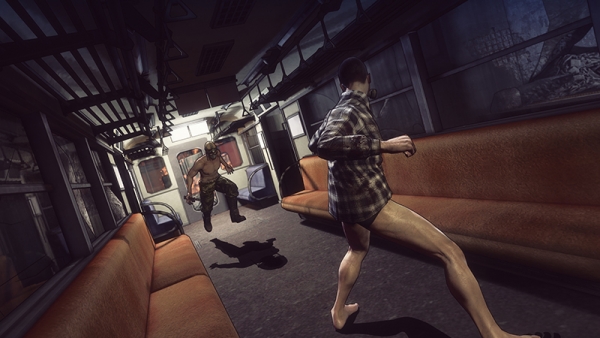 On the topic of finances, stashing goodies means returning to the ground floor waiting room. Cost – via using elevators – is minimal at first…but escalates as one climbs the Tower of Barbs. Suitcases filled with Kill Coins (the game’s currency) are thankfully scattered about, also re-appear upon return to a level. I was very happy to see this aspect thought out.

Finally, and referencing ‘well thought out,’ every item in Let It Die is flat out clever. From weapons to armor and stickers (providing character enhancements), there’s significant intelligence and wit in Let It Die. With such a deep – albeit excessively confusing at first – system and such high attention to detail, this is arguably the most robust free-to-play title I’ve ever seen.

Let It Die is hard, but it doesn’t cheat. Any enemy can be beaten with enough patience and gear. Still, inevitable deaths arise from being overmatched by swarms or high ranked haters. Most of all, the irritating camera is your biggest adversary, and seems to do more harm than good and at the worst of times.

A bit like Fallout but with a grittier feel, Let It Die has the look of a AAA title. Levels are disgusting in the best of ways, littered with bodies and blood.

Amazing. The handiwork of famed Silent Hill composer Akira Yamaoka, audio is incredible. Let It Die claims 100+ top Japanese artists are featured within and it shows. Sound effects are equally terrific. Be warned: bad guys are quick to swear like sailors. Combined with swear words on clothing and environs, Let It Die is not for the kiddos.

It’s free, and publisher GungHo is generous in providing freebies to all players. Any Dark Souls fan must try this one out. But give it at least 5 hours before passing judgement.

Let It Die is flawed, but it’s perhaps the best free-to-play game ever made on the PS4. It’s different, daring, and occasionally impossible. But it’s also a must play for fans of the roguelike gene.