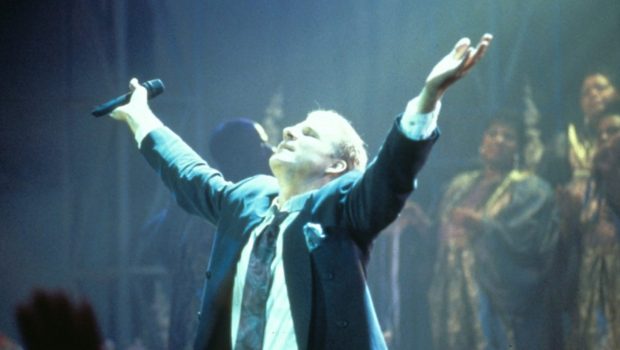 Summary: Steve Martin plays a zany faith healer in this dramedy. It is enjoyable enough, but the gospel music is the real highlight.

Steve Martin has a knack for playing loveable rogues. In “Leap of Faith” this is no different. Although when you think about it, this lead character is more from the crooked “Dirty Rotten Scoundrels” playbook then others from his filmography. This film is a light dramedy whose meagre plot by screenwriter Janus Cercone is saved by the other elements offered here.

Richard Pearce directs this story about a snake oil salesman named Jonas (played by Martin in one of his better acting performances). The bus used by Jonas and his crew beaks down in a remote town in Kansas, and they decide to stay on and perform for the locals. The plan is to fleece them of their money.

The problem is that these out-of-towners are met with derision by the locals. Of note is the suspicion experienced by the local sheriff (Liam Neeson who feels rather conspicuous with his Irish brogue). The fuzz seems intent on an exposé. Local waitress Marva (Lolita Davidovich) is also distrustful but she has good reason. Her brother (Lukas Haas) is disabled and was let down previously by another faith healer.

Jonas’s crew includes no less than Meatloaf and Phillip Seymour Hoffman (where do I sign up?) Jonas’s partner Jane (Debra Winger (“An Officer and a Gentleman”) has a very underwritten part and serves as little more than the love interest. The group’s show is full of lights and Gospel music – the choir is arguably the best part of the film, as they raise the roof! Martin dons glittery and gaudy suits that will occasionally make your eyes bleed.

“Leap of Faith” is a pleasant film that boasts some good times. It is not one of Martin’s best films and it will change your life, much as you get the sense that all involved would like to do so. But if you’re looking for some spectacle and a romp through religiosity than this film is a showy little diversion.