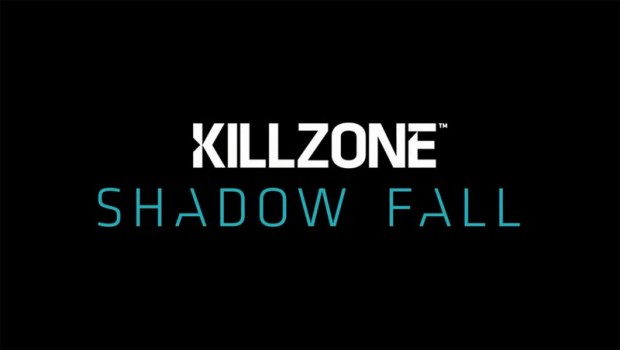 Summary: Kill Zone Shadow Fall is a very enjoyable first person shooter on the PlayStation 4 that really showcases the power of this next-gen console with some fun gameplay tweaks

Killzone Shadow Fall is the highly anticipated next instalment of the Killzone franchise that puts players in the role of  Lucas Kellan, a Shadow Marshall who has vowed to protect humanity from the heinous Helghast who murdered his father as a boy. Unfortunately for the humans of planet Vekta, they now share their home world with the Helghast refugees with only a giant wall that separates them both. However when Lucas encounters a mysterious Helghast soldier known as Echo, he discovers a unique insight into this age old war. 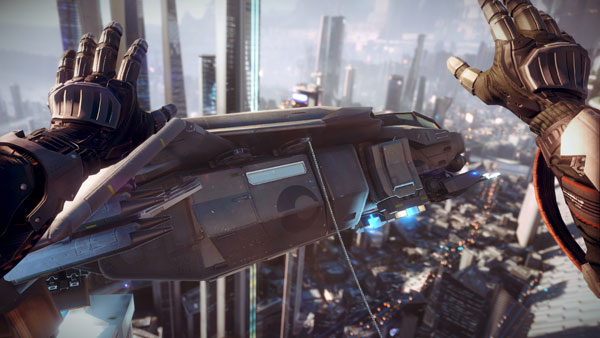 If you are one of the lucky Ps4 owners in Australia, than Killzone Shadow Fall is a must have game for this next-gen console. Not only does it feature some amazing next-gen graphics but it also boasts the best Killzone story to date and features some unique gaming twists, thanks to the touch-pad of the new DualShock 4 Controller.

Developers Guerrilla Games have also gone back to basics with Shadow Fall which almost feels like a brand new game in the series. Thankfully this does not negate the colourful history of the series but rather makes it more accessible to newcomers. 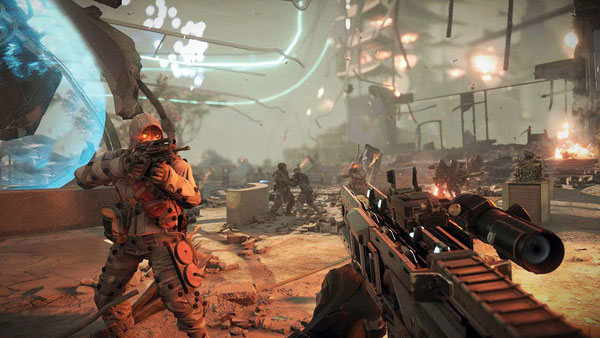 Opposed to the massive battles of the previous games, Shadow Fall focuses more on stealth and guile with small skirmishes being the differences between winning and losing. As the game is set 30 years after the previous title, the planet of Vekta is precariously balanced between both factions and in order to get the upper hand, a covert group of individuals help keep the upper hand for their side which is where Lucas comes into play.

The introduction of Lucas in the game begins with the player controlling him as a boy as he and his father attempt to escape the Helghast from incarceration of more particularly death. Unfortunately this does not end very well for Lucas or his father which leads him to become a Shadow Marshall. However as you complete the missions and come into contact with the mysterious Helghast female warrior known as Echo, you begin to question the true motives of your superiors in this thoroughly entertaining title for the PS4. 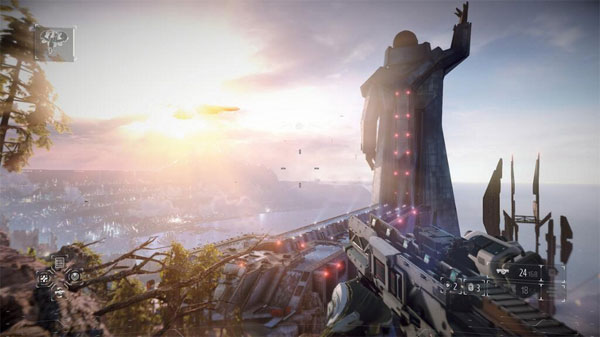 Unlike the claustrophobic and Dystopian areas of the previous games, Shadow Fall is a much more open-world game which features both bright and dark gaming environments. These two environments are like polar opposites and the developers ensure that exploration is beneficial to the player, especially when it comes to the cover system.

With that said, the AI in the game can be quite difficult, however if you do evade them, you can hide in a variety of places which makes the melee weapon perfect for taking out the Helghast. Shadow Fall is also a game that cannot be played like an 80’s action movie because when you blow your cover, the enemy is immediately alerted to your presence, especially with those darn alarms but you do have a very powerful ally at your side.

This ally is OWL, a remote drone that allows you give it orders for particularly actions via the touch pad on the DualShock  4. Controller. For example, by swiping up on the touch pad, this activates the drone for combat and you can order it in a certain area to attack any hostiles by pushing L1. This is a very powerful ally in the game, especially when the enemies come thick and fast. It also introduces some great strategies to the game as when the OWL becomes a diversion, you can then sneak around the enemy to take them out. 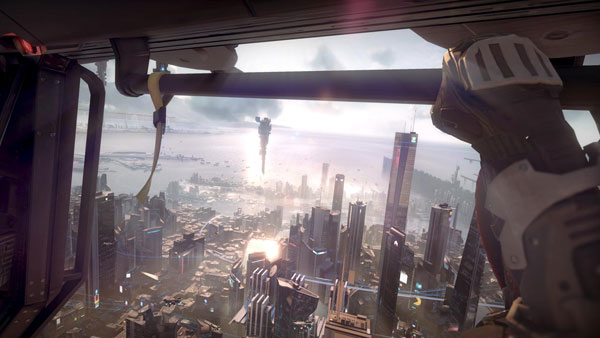 Another activity that the OWL can do is create a shield which gives you a brief respite such as allowing your health to regenerate or taking an adrenaline pack which is restores your health. The OWL can even bring you back from the brink of death, provided you have a spare adrenaline pack. Lastly it can hack systems, deactivate alarms and create zip lines to help Lucas reach places where he can’t walk to.

The OWL is like an extension to your character in Shadow Fall and must be mastered very early in the game in order to support the player as the difficulty level of this Killzone game is quite high. Lucas also has access to a pulse scan radar which scans the area for both hostiles and allies. This only lasts for a few seconds but it shows you were the enemy are located, even through walls thanks to the x-ray. If you use it too long, it alerts the enemy to your presence.

The missions in Shadow Fall are varied and interesting, specifically the various destinations that you visit like a severely damaged spacecraft with zero gravity. Whether you’re searching for surveillance material to return to your commander or engaged in some other clandestine operation, the flow of the game is quite good. The only issue I had with mission objectives is that the waypoints don’t last long on the screen which can become a little frustrating. You can access the objectives via the D-Pad which will also give you a list of objectives. Personally, I would have preferred if the objectives appeared permanently on your screen that would have made navigation easier. 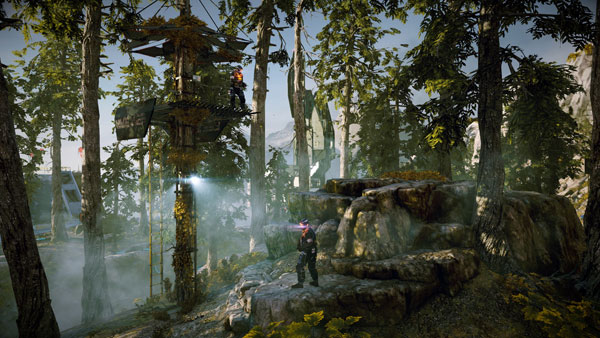 For most veteran gamers, they will easily finish Shadow Fall in around 10 hours as they explore this vast and varied world from the harsh areas of the Helghast to the bright and shiny areas of their human kin. Multiplayer is another strong element of the game and gives the players access to some fun multiplayer modes, classes and maps with up to 24 players. Although the game contains traditional modes, my favourite addition to the franchise is Paranoia in the Park which is tailored for the scout class.

This is basically a deathmatch mode but removes the radar for each player and gives them only one gun, one knife and one life. It’s quite a fast-paced mode that had me cursing and beaming with satisfaction when I finally won! Of course, you still cannot beat War Zone which is a combination of Death Match and King of the Hill that can be quite chaotic at times. The developers have even included a new mode that allows players to create their own online games (provided they have the patience) that is slowly gaining popularity but for now the tried and tested modes are still the best.

Graphically, Killzone Shadow Fall is like a tech-demo for the PlayStation 4. The environments in Shadow Fall are extremely detailed and varied. Some levels may include a forest with a considerably amount of foliage, whereas another may be a Helghast ghetto that is cramped and quite dark. The lighting in Shadow Fall is one of the best to date, mainly when the enemy shine lights in your face from their shotguns. It is easily the best 1080p game on the PS4 that also boasts some great character models that move with realism. The only drawback to the characters is that they look a little “dead” in their eyes but apart from that, Killzone Shadow Fall is definitely a wow moment for this next-gen console. 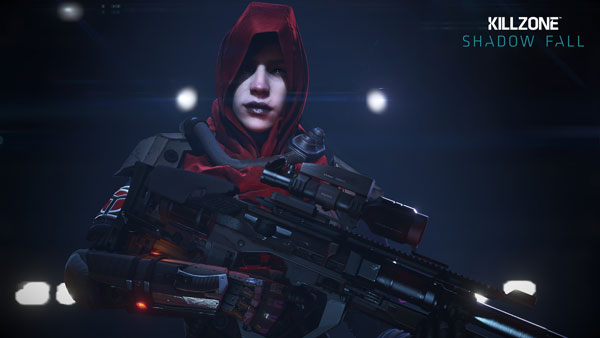 The voice acting of the game works well with the storyline and the gameplay, although a little clichéd and forced at times. The soundtrack matches the various missions that you are engaged in and creates this Hollywood sci-fi experience. Sounds effects sound phenomenal through surround sound and this is one game that should be played loud or with headphones. Did I mention how much I love the audio jack of the DualShock 4 controller? It’s perfect for adding headphones and it works brilliantly for Shadow Fall. Another cool feature is that audio logs are played directly from the DualShock 4 Controller too which adds to the overall enjoyment factor of the game. 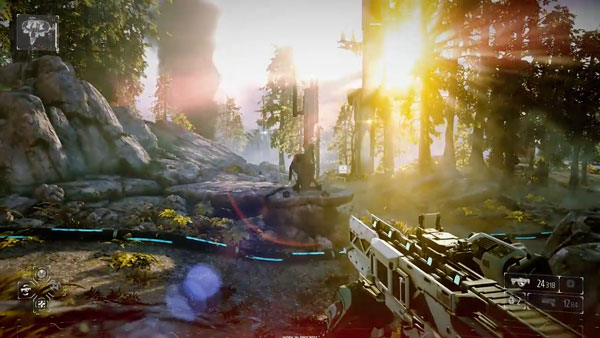 Kill Zone Shadow Fall is a very enjoyable first person shooter on the PlayStation 4 that really showcases the power of this next-gen console with some fun gameplay tweaks. Graphically, it’s one of the best games on this console at the moment and features a very strong single player and online experience. I love the inclusion of OWL into the gameplay, especially with the new DualShock 4 Controller. Sure, there are a few inconsistencies here and there which also includes some very difficult places in the game but overall, it’s a must have game for first person shooter fans! 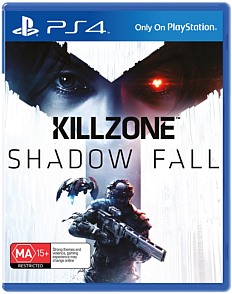 • A New Breed of Hero For a New Vision of Killzone – You are Shadow Marshal Lucas Kellan, tasked with maintaining the fragile peace between the ISA and the Helghast. Any misstep could see the conflict spiral out of control, taking your homeworld with it.

• Designed For The Next Generation of Gaming – With breathtaking scale and the new freedoms of tactical gameplay, Killzone: Shadow Fall is a true showcase for the impressive power of PS4. The redesigned DUALSHOCK 4 further enhances the experience with its refined controls.

• An Expansive Arsenal of Futuristic Weapons – Command the OWL, Kellan’s versatile, commandable combat drone that functions as an extension of you, dramatically augmenting your abilities and offering a host of new tactical options.

• Tense, Realistic Cold War Sci-Fi – On a divided Vekta, one in which bitter enemies are forced to coexist, constant distrust threatens to escalate into all-out war. Discover an all new side to an ancient conflict.