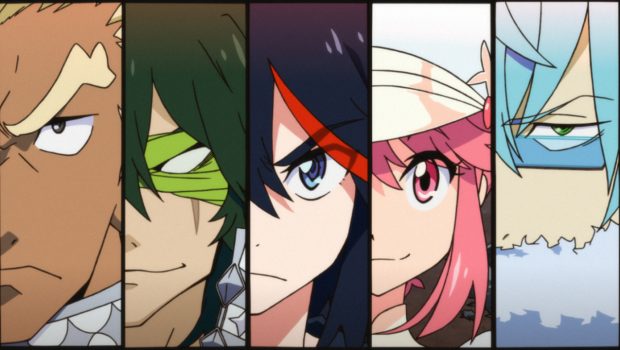 Summary: Kill la Kill's modest first game adds something new to the series, but leaves a little more to be desired.

Kill la Kill– it’s that anime you can’t explain to your parents or your children. Jokes aside, it’s a cult-classic for good reasons. Watch a few seconds of it out of context and it looks like Japan’s being… well, Japan. But the endearing thing about it is how it exaggerates anime tropes to the point of parody, going to great lengths to explain in vivid detail why everybody is getting naked and fighting with oversized weapons. Humour lies in how plainly ridiculous situations are, but how seriously everyone just accepts it without question- a commentary on just how weird stories are when you put them under a microscope.

(Or maybe I’m just looking too deep into it.)

At any rate, now we have this- Kill la Kill IF. It’s the first Kill la Kill game, as well as the first expansion to the ‘lore’ since the show originally aired. Let’s take a look at it. (at least, as much as we can safely show…) 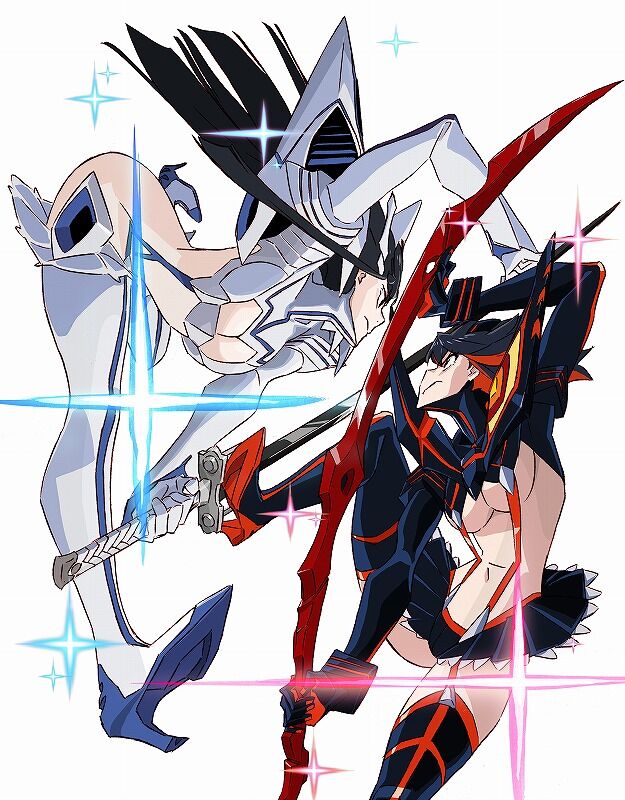 Kill la Kill IF plays a lot like My Hero One’s Justice– which I reviewed previously. There are three main types of attacks. Firstly, there’s the close-range attack, which is basically what it says on the tin. Secondly, we have the long-range attacks, and finally the guard-break attacks, designed to combat blocking. Each attack can be used rapid-fire but they can also be charged by holding the corresponding button down.

If you get enough attacks in, you can fill a meter to perform special moves in each attack type by holding down L as you strike. It’s all pretty basic for arcade-style fighters, but we have yet another action that can be performed- Bloody Valor. By pressing L and R together you can initiate a game of rock-paper-scissors with the opponent. Win, and you’ll be awarded with a useful buff, like speed or strength.

But that’s not all- naturally, we also have a Story Mode to delve into- two, actually. Yes, this game has it’s own version of the Kill la Kill story, and there’s actually two stories running parallel. The first story follows Satsuki Kiryuin while the second features main protagonist Ryuko Matoi, and there’s a great deal of story content mixed in with the fights. Unfortunately, that’s as spoilery as I can get, so let’s start talking about the finer details. 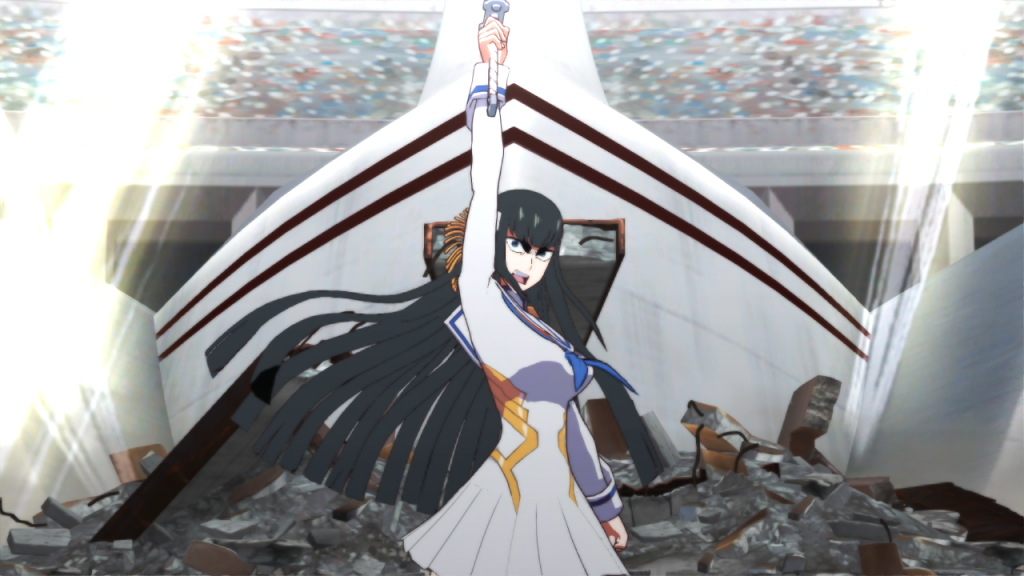 The game is bogged down with a handful of issues. The game offers four difficulty levels, but I doubt you’ll be raising it very high. It’s easy for opponents with to trap you within chain attacks that consume more than half your life bar without any opening to escape. I’m not necessarily critiquing the game for being too difficult here, but the difficulty levels seem really unbalanced. The default 1-Star rank is generally beatable for the average player.

But in the rare instance where a fight becomes a bit too tough, dropping the difficulty down to ‘No-Star’ suddenly makes the game way, way too easy. Enemies are a total pushover and barely do anything. There’s a degree of shame when you have to drop the difficulty level to get past a hard level in any game, but Kill la Kill IF‘s radical difference in difficulty levels removes any sense of challenge in an instant.

The difficulty of the Story Mode is uneven, as most of the toughest fights are bizzarely at the very beginning. At first I thought I was just naturally becoming more skilled at the game as I played it, but once I began the Ryuko version of the story I was confronted with the same issue- the game becomes easier as you progress, not harder. Satsuki’s Story Mode pits you against four characters at once very early on, and Ryuko’s Story Mode has you fighting them one-on-one but back-to-back with a single health bar. In the case of Ryuko’s fight, I had to resort to turning the difficulty down just to get through it. Yet, the further I got through the rest of the campaign, the easier it was to win fights effortlessly. 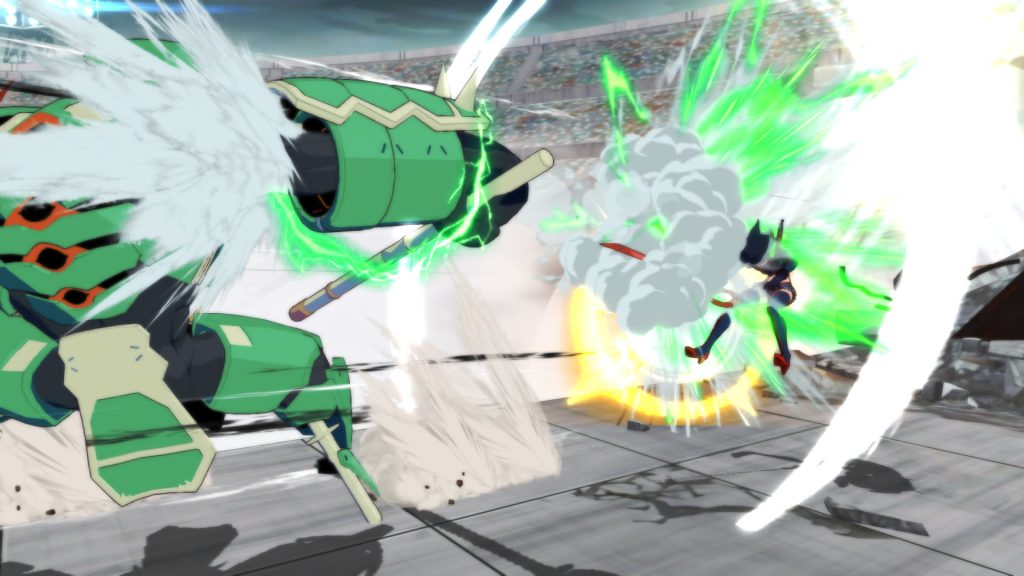 For the most part, the graphics and controls are fantastic. The visuals reflect the anime art-style, with the characters having fewer animation frames to mimic the hand-drawn charm, while the actual gameplay still feels really smooth. Any instances of the framerate dropping are well masked by this effect. The game has lots of neat special effects that flash on screen as you attack or take damage, making the fights seem like something you’d see in the show. While the game looks adequate on the TV screen, playing in Handheld Mode is honestly more impressive. I’d argue that the character models could use some more detail, and it becomes obvious when cutscenes are animated with the in-game models and not animation cells, but otherwise it’s quite impressive.

The camera controls aren’t quite as dependable. The game’s camera is locked between you and the opponent closest to you, which sounds great on paper but doesn’t work well in execution. For one thing, your enemy is always in the center of the screen, so your character is always somewhere on the edge of the screen, restricting your vision. Randomly, the camera will place you behind the enemy and very far away, making it difficult to judge distance.

As the camera can only focus on one enemy at once, you can find yourself being blindsided by enemies that you can’t even see. What’s even more annoying is that the camera will always snap to the enemy that’s closest to you, even if that’s not the enemy you’re targeting. 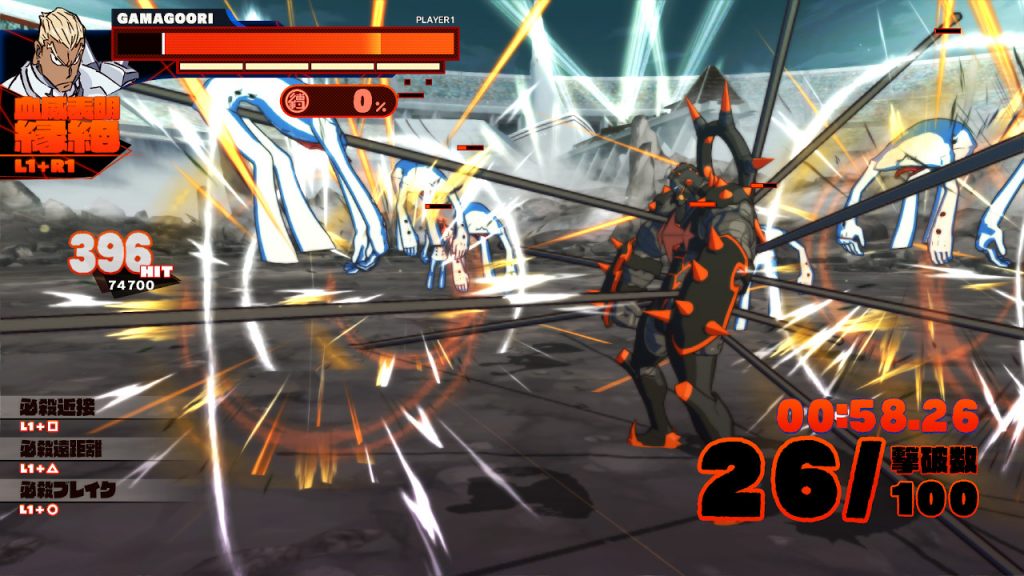 So imagine this scenario; you’re up against multiple enemies at once. One of them specializes in long-distance attacks and will keep at a distance. Another is skilled at close combat and pursues you. You can hold your own against the second enemy, but are bombarded by attacks from the long-range enemy from outside the camera’s field of vision. You don’t know when the attacks are coming and don’t have time to dodge them.

So you change your strategy and take out the long-range enemy first. But because that enemy avoids you like the plague, if you got close enough to attack, the second enemy will come up from behind, stealing the camera’s focus again, giving the long-range enemy time to escape. It’s a frustrating situation- and that’s the second fight of the game.

All in all- my thoughts on Kill la Kill IF are a bit mixed. The game plays best in one-on-one matches, which is what you’ll be playing most of the time. Stick to versus mode and you’ll be fine, but playing through the Story Mode is required to unlock certain characters, and it is a little annoying to get through unless you play on the lowest difficulty. I doubt Kill la Kill IF will appeal to anyone who’s not already a fan of the series but there’s fun to be had here.