Summary: Jurassic World Evolution is a game that makes you feel like part of this awesome book and film franchise.

The Game finds a way.

Games based on film and TV franchises are nothing new. There have been some real head scratching moments in gaming, where it seems the developers figured lets slap this successful franchise name on a crappy game and we cannot go wrong. Of course, those never work out well. Then there are games that do the franchise proud and even enhances a fans experience in the franchise. Thankfully, Jurassic World Evolution is one of those franchises that does the franchise proud and puts you in the middle of creating and running your own parks.

Jurassic World Evolution is also one of those games that you are going to either firmly like or just out right hate. I am not sure there is much middle ground here. Easing into it and deciding to start over three times helped me appreciate more of the nuances of playing and managing the game. 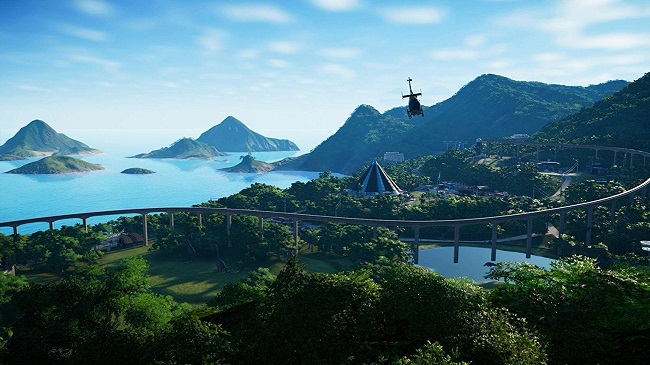 It can feel like a daunting task, though like any good game the developers ease you in with a tutorial for the first part of your gaming experience. A sort of learn as you go with some strict almost invisible fences that keep the player more or less on the right track to learning how to get things up and running.

I say invisible fences for the player because the developers make sure that only certain options and menu choices are active and available during the introduction phase of the game. This makes sure the right steps are relayed to the player for some success in their park building and managing adventure.

Jurassic World Evolution turns out to be a bit deeper than what you first see. You end up juggling not only the research and growing of Dinosaurs, but also the amusement of park guests.

Therefore, it is building a park from the ground up, building different buildings and also deciding how much you are going to sell food and souvenirs. In addition, you build enclosures and upkeep of the animals you create. As the park administrator, you run different response teams. Such as rangers, that go and repair structures and fencing as well as handle and treat sick animals and resupply feeding stations, then a special team that tranquilizes animals as needed and removes them to another location. This team also removes dead animals.

As you make money from the park and contracts to complete different tasks, you can send out dig teams to different parts of the world in order to find fossils and amber with bugs in it, in order to extract DNA. The dig team can also find other objects of worth that you can sell as needed when funds are low. If the parks expenditures and costs or running things over takes the profit margins, then the park is closed down, end of game.

In a pinch, you can sell buildings or items you find on your digs to get an influx of cash if your financing is running low. 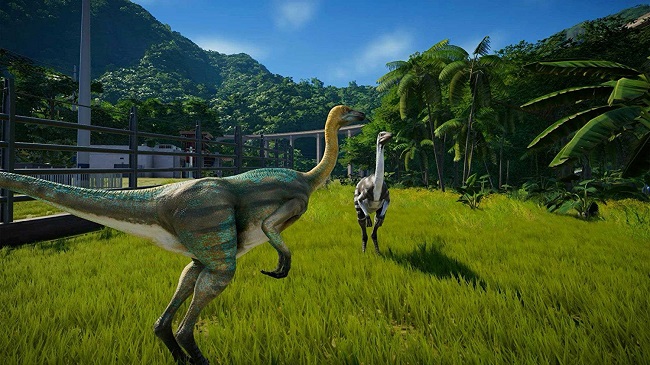 There is a lot to running the park, financing and deciding on research to upgrade buildings, research on the medical side to keep the animals healthy. It is a heck of a juggle. However, it is an interesting one. One that can catch your interest enough to want to keep going, to want to create your next Dino, or get that next building built for your ultimate research and Visitor Park.

Making Money from the park and contracts from advisors is crucial to keeping everything moving forwards. If you want to find more Dino DNA from Bones and other sources, you have to be able to pay a dig team to go out to different dig sites around the world. Once they get either fossils or amber with insects in them, you can extract DNA from these items, which also costs money. As you gain access to more dig sites around the world, you will be able to try to create more species of Dinosaurs.

Now as you get more DNA and get the chance to create more Dinosaurs you can alter the DNA of the creatures with species around today, such as Snakes, sharks, frogs and researching into these other types of DNA and gene manipulations will give the animal different aspects such as increased aggression, longer life span…etc.

Just how far will you go in your DNA manipulation? 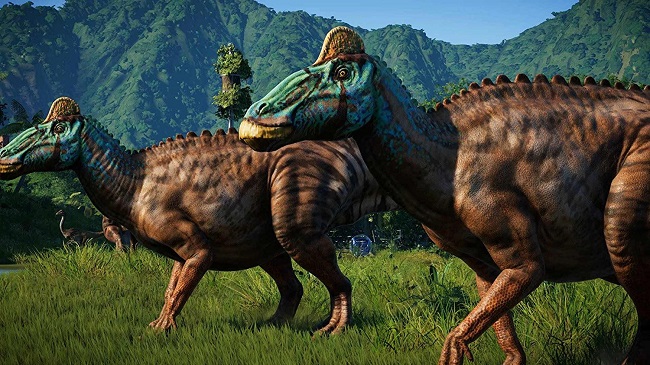 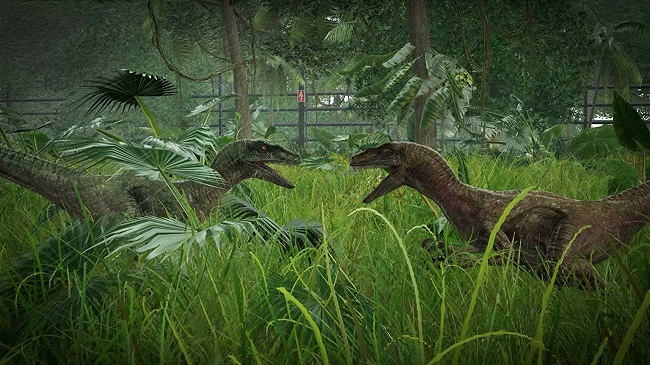 There are a good number of species to grow to maturity. A good number of carnivores as well as herbivores, all waiting for you to realize into being, and releasing them into whatever containment pen or area you have created for them.

It is rather fun for a bit to click on one of the creatures and inspect them a bit closer. When there is more than one in a herd, and or running around on their own. You get a information pop up that tells you what they are doing, from socializing, to eating or even fighting. The fighting bit is a bit obvious of course.

One thing I was surprised I did not think of when I created a carnivore…I set it lose in the large areas with the herds of herbivores running around. I figured it would be ok if everyone had a feeding station. Well not so much. The carnivore just starting killing everything it seemed just for the sake of killing. So lesson learned. I made an area with access to water and a feed station surrounded by electric fencing.

The game looks awesome, there is weather effects, and the graphics of the dinosaurs are impressive and you cannot help be feel some giddy fun creep in when you realize the creation and release of your first fully realized Dinosaur.

Everything comes together to make you feel like this is a legit part of the franchise we all know and love. All voice actors bring it home with the characters they play, but nothing is more awesome than to hear Jeff Goldblum bringing to life Ian Malcolm once again. The line delivery in the way we know only Dr. Ian Malcolm talks, that distinctive cadence and inflection. To me this just serves to make it even more of an awesome experience. 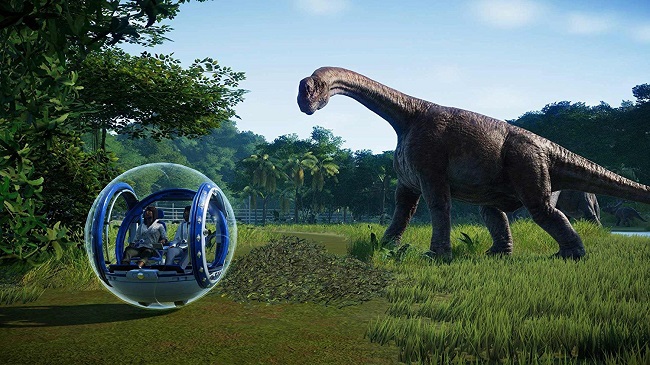 However, like the research scientists in the films not making a 100% Dinosaur with perfect DNA, something is not perfect with the DNA of the game. It makes me question the game when your advisers can be so darn petty and even sabotage other aspects of the park, jeopardizing the welfare of the animals and park visitors. Let alone some of the questionable tests that are asked of you, such as letting a Dinosaur breach fencing, and running rampage into the guest areas of the park and causing deaths…just to test the response teams. Really?

After a couple of hours with the game, the lack of variety in the game starts to peek through. The lack of vision in things such as contracts starts to make you wonder what had they been thinking. Some contracts seem to be designed to cause harm either to guest or to the Dinosaurs that you just spent great gobs of money to create. Where is the logic in that? Security advisor… let’s set a Dinosaur lose in the park…yea I know but I just can’t let that one go.

Asking for contracts is the only way though to engage the advisors, such as Entertainment Advisor, Security and sciences. One of the oddball things is that the first Island is supposed to be the main tutorial island. Sometimes you may have went ahead and explored ahead of any tutorials and have already learned how to do something….but it pops up later anyway and you have to go through the paces to get the credit for learning how to do what the tutorial is teaching you to do.

It is not too annoying and you do get some cash and or something in exchange for doing the task anyway. 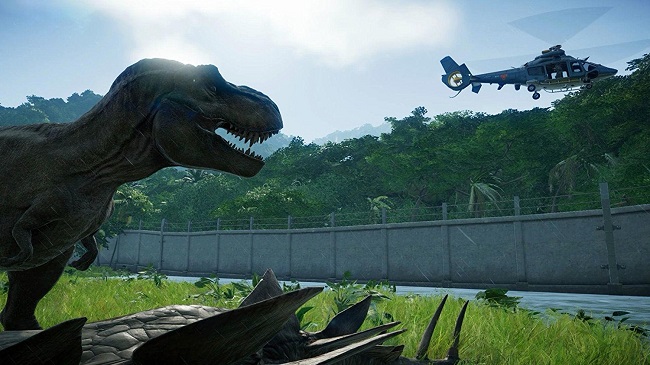 The game may not hold many peoples interest for too long. Something keeps me coming back for more though. While not perfect, it is a nice addition to the Jurassic park franchise…and you get to be the one that calls the shots, and make all the mistakes this time. It is something of a blast to be part of this world. Have fun because, even with a few flaws, the game will find a way.