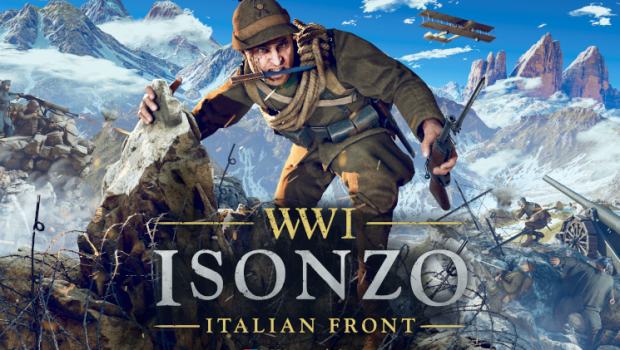 Isonzo is a multiplayer WW1 first-person capture the flag style shooter, that follows many other titles along the well treated path of the same genre.

Having just recently being released, we were able to take a first look with a pre-release version, which meant that there may have been some aspects that were not quite finished or as polished as the developers at BlackMill games would have liked. But surprisingly, there didn’t seem to be much of an issue there.

Fall in soldier, it’s time for a SITREP.

Lush landscapes, cloud dynamics, well made textures and static warfare related mesh objects. The scenery is adequate for the task, where you wont be spending too much time looking at the rocks or the wood texture at the ammo dump, you will appreciate that the BlackMill team have spent a fair amount of time making sure that everything is as it should be. 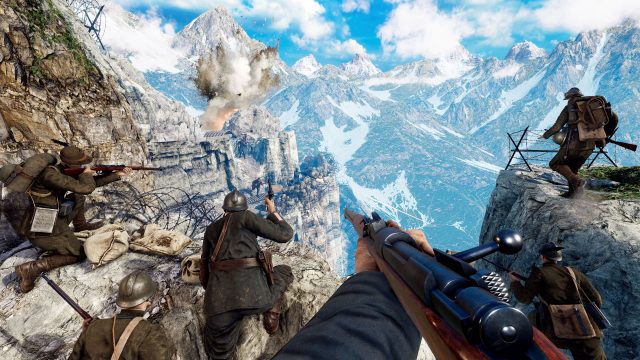 The NPC’s, the soldiers are all very generic and cookie cutter. You wont find any deviation from the standard template, at least not from what we saw. Everyone is the same 6 foot (no we didnt actually measure this!) perfect specimen with 2 day stubble and a rifle.

Clearly a lot of attention was given to the weaponry, specifically the proving actions and movements and the delightful fling of the spent round, all of which is pretty slick. When something is done right, you don’t notice. So it may strike you odd, that perhaps sometimes you expect to see a blemish in a uniform, a dynamically placed rip or patchwork, or something to give added immersion, but no. Which is perfectly fine, its about the action right? 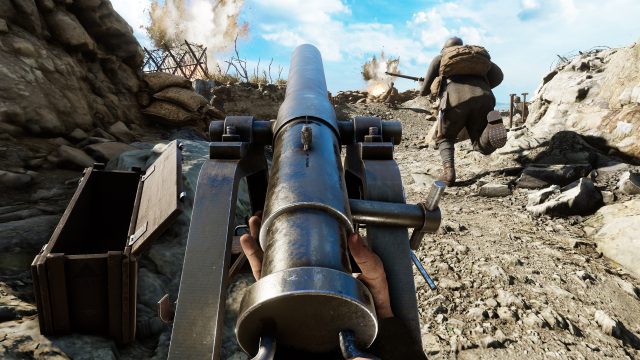 Being an Xbox One port of what is – and make no mistake, a PC game, well things go a bit awry immediately. Firstly the main screen is filled with text you wont be able to read unless you are 30cm from your screen, and most will struggle with the menus. But there didn’t seem to be an option to increase the font size either.

Performance on the Xbox One S was alright, except for some moments of stuttering but, no you will be fine.

Delightful music adorns the intro and play, which can be disabled.

Explosions, gunshots, ricochet and that little tut or ‘thrip’ sound when you get shot, perfect. There is nothing seemingly missing from the sound that draws attention or merits discussion. There is radio chatter, grunts and steps and running, and well everything seems to be there.

The video looks awesome, and you think, ooh yeah I would totally love to play that. So you get the game on your Xbox One, full-well believing that if it is available for the Xbox One, it should be pretty playable on it.

Well private, it is time to burst your bubble.

This is a PC game through and through, and it has potential to be a great PC game; however this is another case of port-a-game economics.

The game play is simple and all too familiar. Capture the flag and control the map to win. Spawn points exist on each side which represent capture areas, and there are different soldier archetypes to choose from.

Spawn, go to where the bad guys are, shoot them, don’t get shot, keep to the objectives and defend your own areas.

There are static interactive heavy weapons and some archetypes such as engineers can lay explosives, which will also more than often kill your character.

So given that this game is exactly like a few others we are all thinking of, what makes this game different? Well, this one is new and not associated with those other games!

On the Xbox One, Isonzo is clunky, the player character is difficult to control, the movement is jerky and janky, the aiming is almost too impossible, especially in close quarters. Sure, you can and will get used to it, but you want to be able to drop in and play, because nobody has time to spent 12 hours a day getting good at these controls.

Coupled with the field of view/depth being unfriendly to the couch player, again being more suited to a PC, the level of frustration the player is exposed to will be immense.

Isonzo looks to be a solid entry in the already busy offerings of this genre. The real question is, why did they bother? As mean as that sounds, there is nothing new to this game aside from the developers personal take on the animation and map layout. As a PC game, the success of Isonzo is going to rely upon the uptake of users, who must be prized from already established and polished titles.

What does bode well however, is the lack of in-game monetisation which is a frustrating presence elsewhere. So far as the controls may be clunky on an Xbox One, all other players opposite you on the Xbox will also have the same handicap, but not the PC players!

After 20-30 minutes of play, bored and frustrated was the result.

You will however, find many raving PC reviews for this game, so be discerning here. 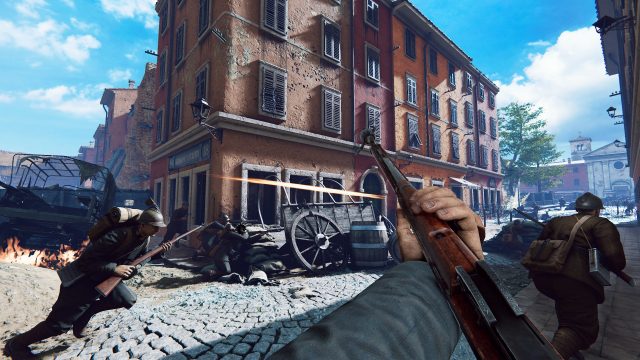 Summary: Isonzo on the Xbox is like a reminder that you should never put tomato in a fruit salad. Play it on a PC if you play it at all.