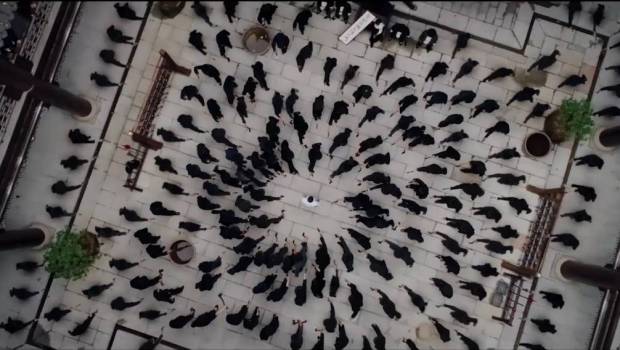 Summary: That'll do IP Man, that'll do. Only watch if you are a Michael Wong completionist.

I would have thought IP Man 4 finished this story definitively since it was the final story of that real historical figure. Also Donnie Yen said he was “too old” to play IP Man now and had done it for long enough, Kwan Tak-Hing  would say “BITCH PLEASE!” where’s my IP Man Battles the Gorilla like Wong Fei did?

How many times do they need to make the same story anyway?  Fist of Fury (1972) and Fist of Legend (1994) already covered the same ground along with the original IP Man movie by Donnie. It seems like a copy of a copy. Legend of the Fist: Return of Chen Zhen (2011) was even a sequel to the events of Fist of Legend but it’s boring so don’t watch it. IP Man 3 is worth it to see how much fun Mike Tyson is having in his scene, he can’t take the smile off his face.

This film decides to redo IP Man (Yu-Hang To) as a faithful police captain in Foshang and has the head of the Axe Gang San Ye (Michael Yong) being bought in by him, only to meet an untimely end by another threat. The daughter of the Axe Gang leader is out for his blood but does not know she has also been set up.

Uncle Leng (Dongfeng Yue) turns up as an annoyance and old drunkard who fights by not leaving his chair, but does eventually agree to help. The Japanese are involved but don’t seem to be as much of a threat as compared to the other versions of this story and the Japanese businessman is the real villain.

I am well aware of all the Shaw Brothers movies pretty much being written by the same person and having a lot of the same actors, but this is different as there about ten production companies involved and it does not seem to have any life in it at all.

The fight scenes are just boring and do not have the punch of something like Kung Fu Hustle or the fight with the Northerners in IP Man. Samo Hung’s fights are very brutal and you do see the damage, at one point they digitally add a big bruise during the scene and you can see it straight away.

I did not feel anything with the music at all and it seems to be the same generic “this is a fight scene” tune that plays every time. Compared to something like the Axe Gang fight scene music in Kung Fu Hustle (I bought the soundtrack) it does nothing for the scene.

Having the Axe Gang is such a big lift from Kung Fu Hustle which even though it borrowed from other movies it was more classy about it. Come back Wong Jing! At least he knew how to make an original story in among a lot of the other rubbish he did.

Yu-Hang To was in Donnie Yen’s IP Man as another character but has all the emotional range of a block of wood in this and doesn’t really sell the fights. Michael Wong is great but is not really given enough to do, Michael Wong GIFs went in hard on for this movie because of his presence and I think the discussion I had with him and on the LoveHKFilm Facebook group was more entertaining than the movie.

The daughter of the Axe Gang leader is meant to be a second lead but hardly has anything to do. Uncle Leng (Dongfeng Yue) was a Drunken Master type character who had a bit more character but felt like they could not afford Ng Man Tat.

The only good thing I could say about it is at least it is not another version of Journey to the West, like we need any more of them. I can’t really recommend this to anyone as you can find better older versions of this story out already or just look up on YouTube.