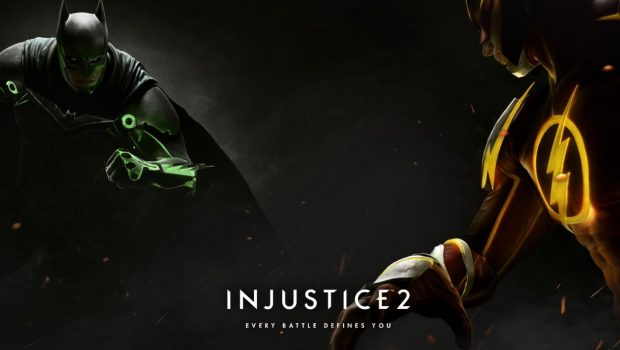 Summary: Injustice 2 is the best fighting video game released this generation, with stellar single-player and online content, addictive gear and customisation options, fast and frantic gameplay and incredible graphics, all of which impressively realise DC Comics' most iconic superheroes and supervillains.

Whether you are a casual DC Comics fan or hardcore fighting video game enthusiast, Injustice 2 is a game you should not overlook in 2017. With stellar fighting gameplay mechanics, tons of single-player and online modes, extensive fighter customisation and, frankly, some of the best graphics and use of the DC Comics license we have seen. 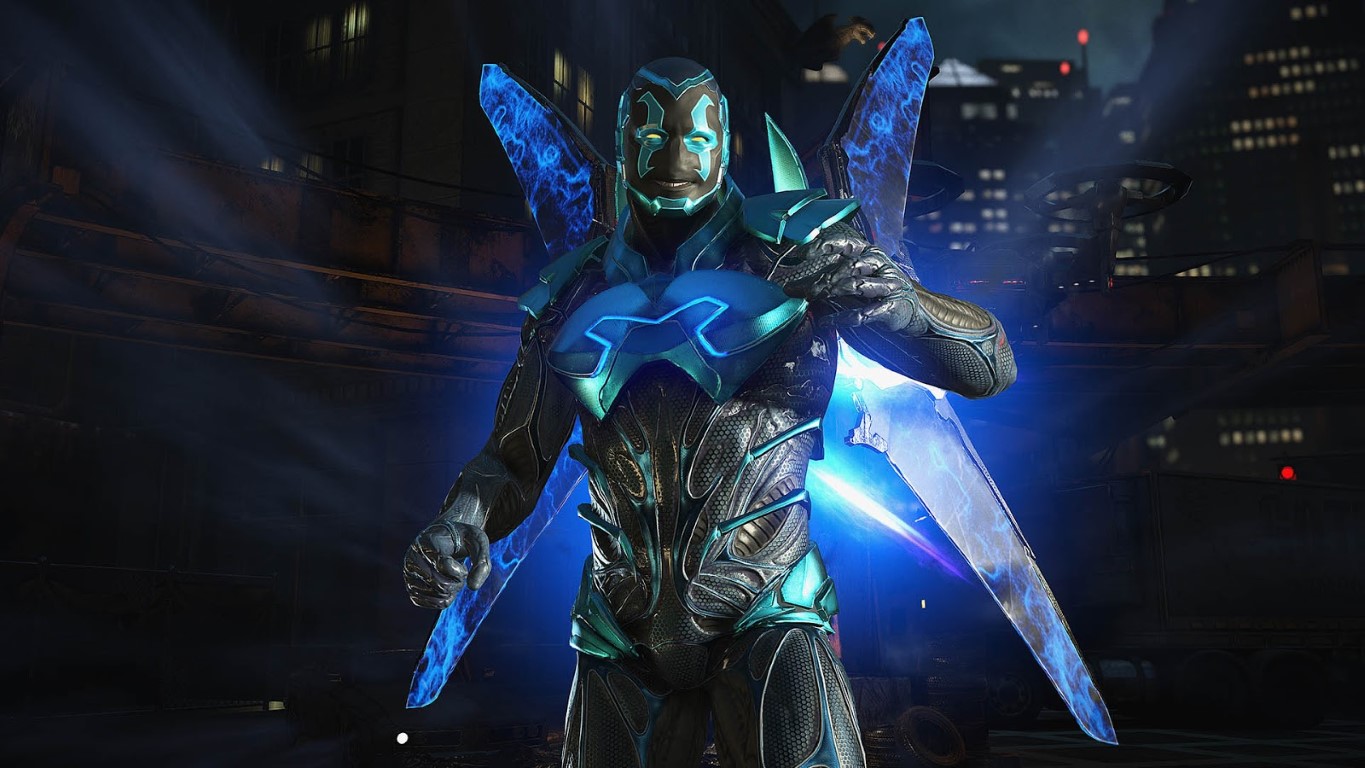 Injustice 2 takes place in the same alternate DC Universe as the first game and explores the continuing aftermath of the superhero divide between the heroes of Batman’s insurgency and Superman’s One Earth Regime. Five years after Superman killed Joker for destroying Metropolis and killing millions of people, he now languishes in a prison cell while Batman and allies continue to clean up the mess created from his totalitarian policing of Earth.

Despite Superman murdering most of the world’s worst criminals without trial in the first game, several new threats emerge in Injustice 2 to challenge the remaining superheroes. Gorilla Grodd and other surviving supervillains form the Society to establish a new world order, and an extraterrestrial threat from space simultaneously arrives and attacks all of Earth, forcing Batman to hastily gather a new Justice League to help repel the alien invasion, revealed to be led by Brainiac. 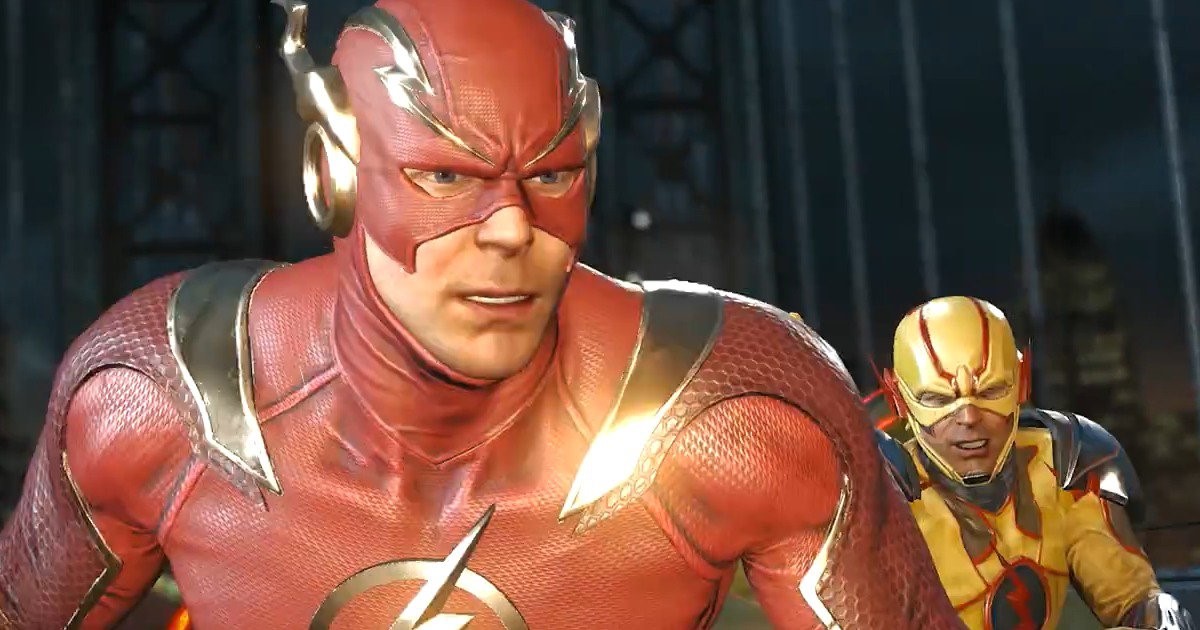 Split across 13 chapters, the campaign is experienced through the perspective of multiple superheroes on all sides of the new conflict. Each chapter has a number of fights to win in order to progress to the next level, with the option to choose a particular fighter offered at key moments. The main story is told through cinematic narrative cutscenes in between fights and NetherRealm Studios has injected some serious money into making sure their story is as epic and grand as possible for both casual and hardcore DC Comics fans. The latter group will highly appreciate the frequent banter, subtle references and overall effort in keeping to continuity of both the first game and the tie-in comics. 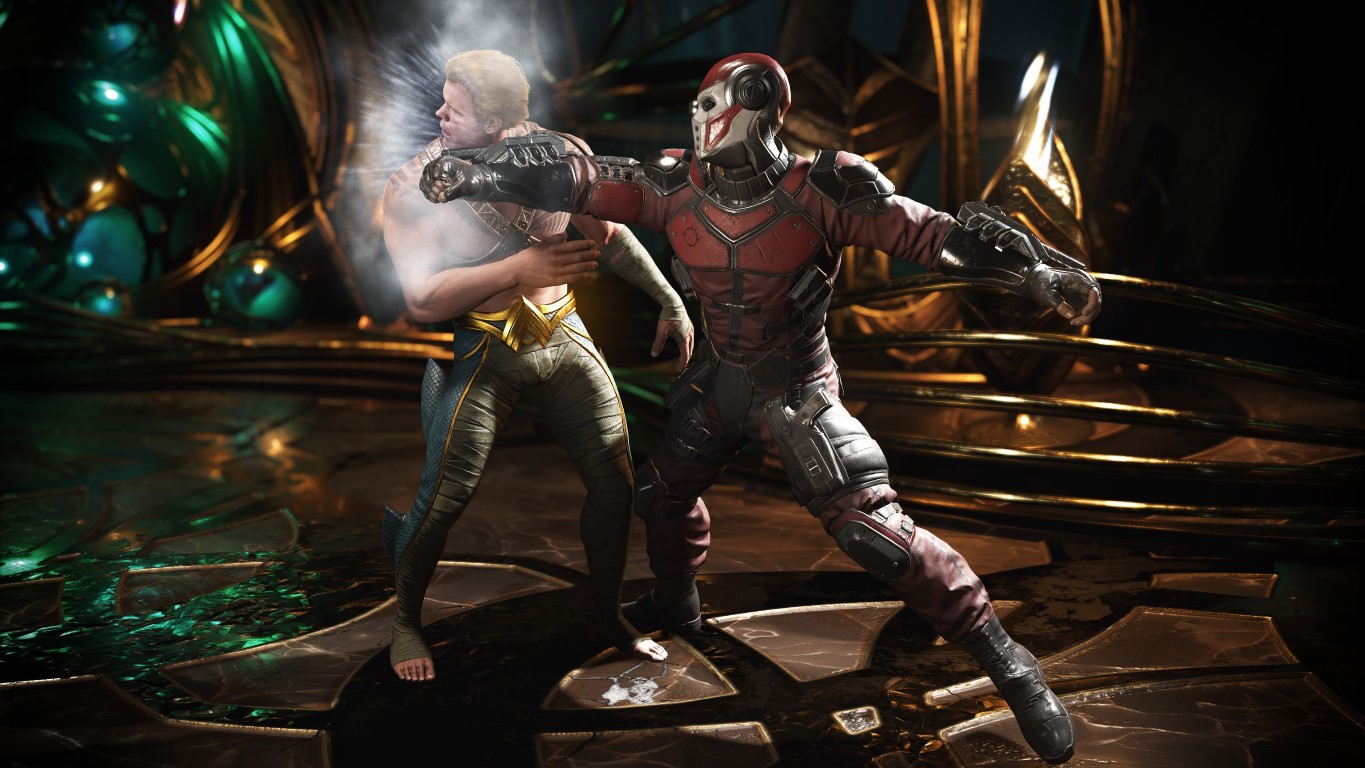 Each story chapter is essentially a scenario involving one superhuman bashing another superhuman face in, but the developers manage to create entertaining and plausible stories around such powerful one-on-one conflicts. The reasons for fighting in Injustice 2 may be super serious and dark, but there are also some incredibly fun interactions between DC favourites which lighten things up at the right time. All in all, the main story campaign absolutely steals the show in the quality of its storytelling, presentation and overall length and is a solid reminder that contemporary fighting games should never skimp out on great single-player content. 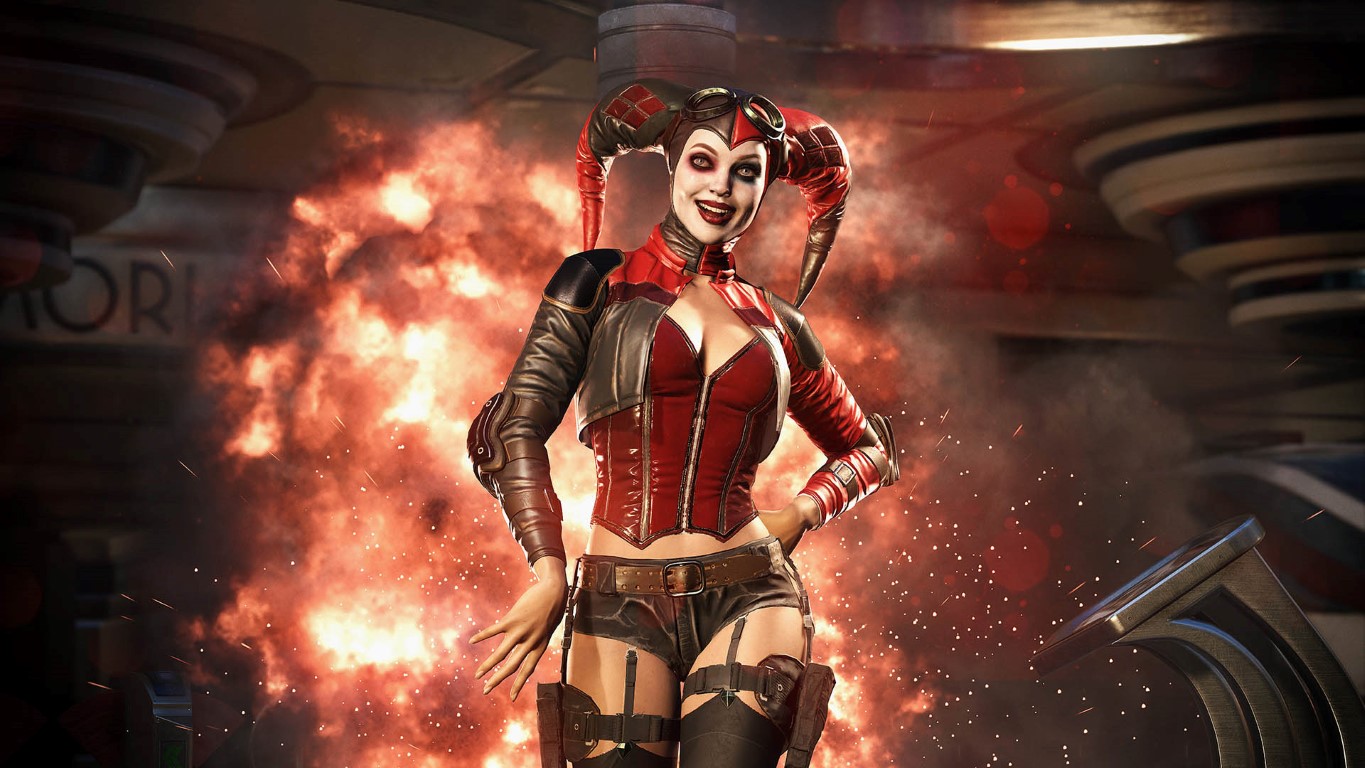 A good fighting video game lives and dies by its roster and thankfully Injustice 2 does not disappoint. While you mostly play as the heroes in the main story, the rest of the base game has a 29-strong cast of DC Comics’ most iconic superheroes to play as and fight against, including Batman, Harley Quinn, Black Canary, Green Arrow, Aquaman, Flash, Green Lantern and Superman. The villains are equally represented, with the likes of Bane, Catwoman, Deadshot, Atrocitis, Poison Ivy, Gorilla Grodd and more rounding out the ranks. The game also includes some relatively obscure DC Universe characters who will no doubt become more popular in the wake of their inclusion by NetherRealm, such as Blue Beetle, Captain Cold, Firestorm and Swamp Thing.

All of these characters are injected with so much personality faithful to the comics it would make any hardcore DC Comics fanboy squeal in joy (as a casual I still loved it) and it never gets old watching their introductory banter at the start of every match, of which there are three unique conversations for every pair-up – with 29 characters, that’s a ton of effort in voicework for a fighting game. The incredible variety in playable characters and their interactions extends to their individual playstyles, too, as every fighter stands out and plays their own unique way thanks to an incredibly in-depth list of combo moves and special abilities an immense level of balance and tweaking implemented to round out their pros and cons against each other.

Each fight in Injustice 2 is a one versus one affair and the fighter who depletes their opponent’s two health bars first wins. The controller face buttons represent light, mid and heavy attacks, while gamepad triggers are used to throw and use nearby environmental objects in battle. Combining these actions with each character’s special attacks and unique ability (Supergirl can use her laser-eye beams, while Robin throws a batarang, for example) is key to stringing together powerful combos and building your super meter in battle, which can be used to enhance your special attacks into more damaging forms. The super meter can also be fully charged to unleash a highly damaging super move with a special animation unique to the character that is highly entertaining to watch unfold. Along with stage transitions, dodge rolls and blocks, there are plenty of offensive and defensive avenues to learn and use in your battles.

While many of the actual controller inputs required to pull off moves are similar to other characters, the animations and execution are always different. Deadshot may rely on more projectile-based combos and attacks, while the faster-moving Cheetah better dominates fights up-close and personal. Robin is my personal favourite fighter, boasting quick and dirty swordplay with ample use of projectile gadgets to help control the tempo of the brawl. Ultimately, basic fights in Injustice 2 can be as complicated and stylish as you want it – you just have to put in the effort to learn in practice mode and the numerous tutorials available to help get a better grasp on things.

There is, however, no denying Injustice 2’s core gameplay is definitely on the harder side of things than your average fighting video game. Inputs require decent muscle memory and timing to pull off effectively; thankfully, the A.I. difficulty settings can be toned down to give yourself a fighting chance and other single-player modes such as Single Fight and The Multiverse gives casuals an avenue to simply enjoy the game without the pressure of having to perform against real seasoned pros – who you can eventually battle online for your place in the worldwide leaderboard in Ranked, Player or Private Match in classic fights or King of the Hill.

Speaking of Multiverse, it is a Living Towers-style ladder crawl with daily challenges and unique modifiers which shake up the core gameplay and keep things fun and fresh – while awarding you with experience points and numerous loot boxes for your performance, called Mother Box. These ties into the new RPG and gear systems implemented in Injustice 2, which lets player customise both the look, abilities and stats of their fighters with the loot gathered from Mother Box rewards. 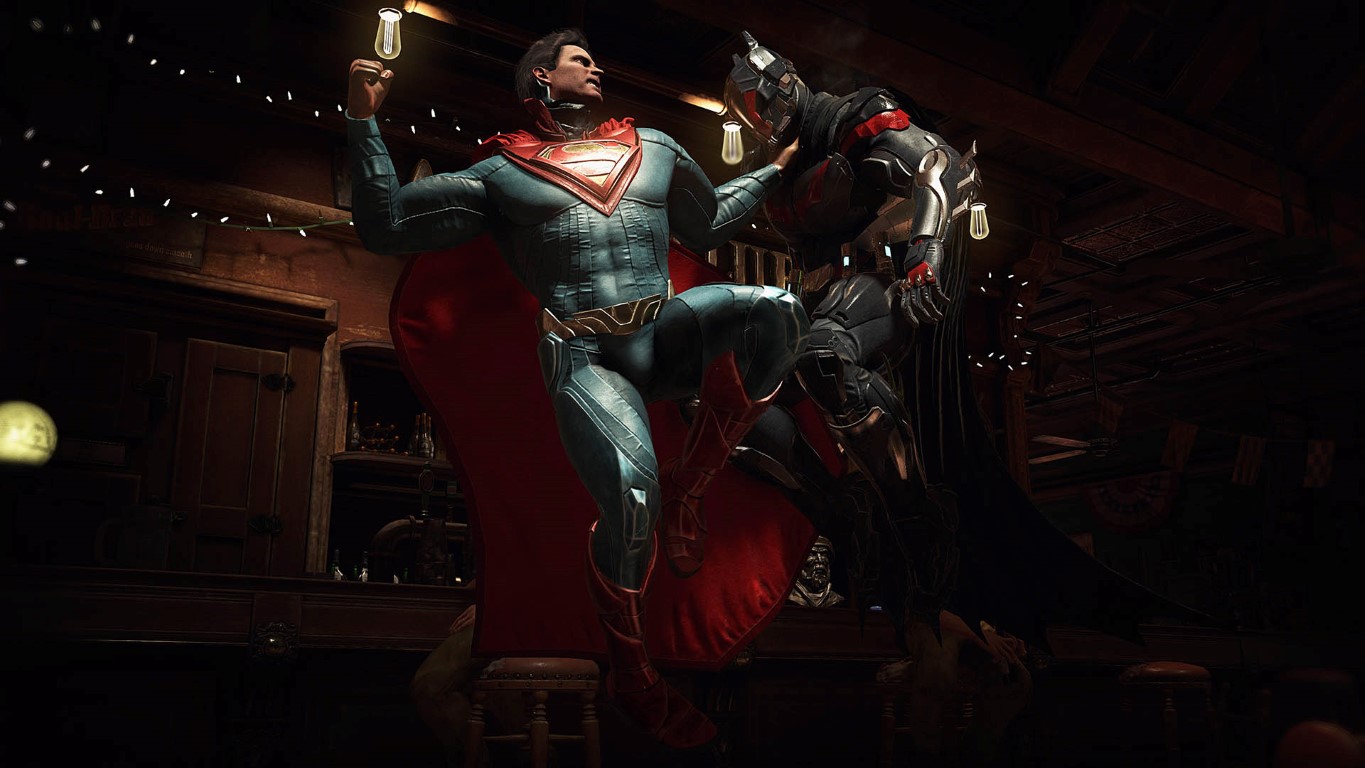 The gear system is incredibly addictive to indulge in. Every fight you complete earns you higher levels and better loot, and customising your favourite fighters in cooler-looking armour and weapons with higher stats never gets old – their benefits come in especially handy during Multiverse challenges, but you can always turn off their statistical effects when you want to keep things fair and still enjoy (and show off) the aesthetic differences. Another immensely cool unlockable customisation option is Premier Skins, which not only change the fighter’s costume but also the entire character; Hal Jordan as Green Lantern, for instance, can be changed to John Stewart, and Supergirl can be changed to Power Girl. The Premier Skin isn’t just a simple palette swap, either; they also have unique banter at the start of the match.

Overall, the gear and light RPG systems will definitely divide players due to the obvious inclusion of microtransactions; while you can earn Source Crystals (the game’s premium currency) just by playing (albeit at a slower rate than just buying it outright), the currency dries up after you reach level 60. It remains to be seen if NetherRealm expects fans to fork out additional cash for Source Crystals, given is needed to unlock Premier Skins and shaders, transfigure gear, and other in-game benefits. The fact they also so clearly removed Darkseid from the base game just to be sold as Day One DLC for $8 also soured things somewhat, and is perhaps my only disappointment with the overall product on launch. 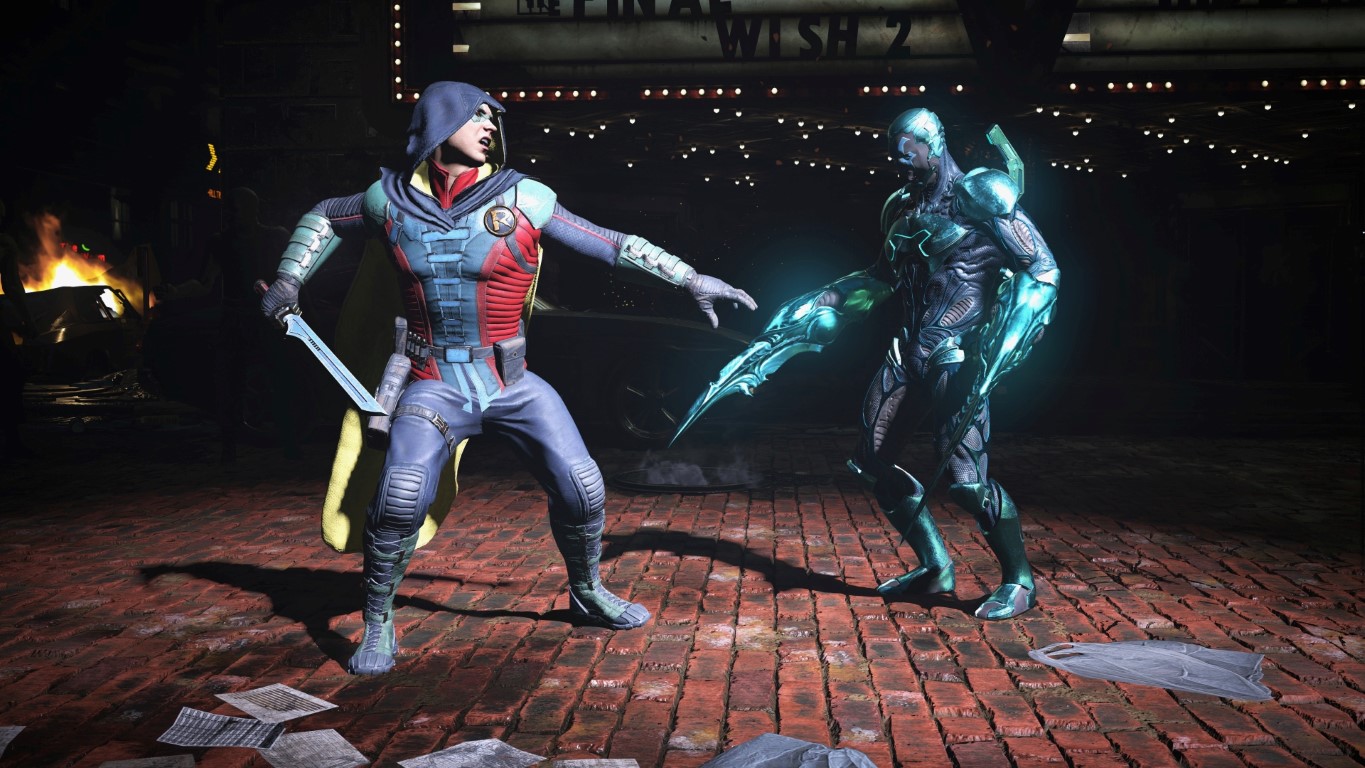 The online multiplayer modes in Injustice 2 are well implemented, albeit highly competitive. Players can quickly jump into ranked matches which count towards your win/loss records, player matches for casual fun, and King of the Hill for competitive bragging rights against a several players who act as an audience while they wait to dethrone whoever is king. The netcode was smooth for the most part, and you can find players with the best ping in custom rooms to ensure you aren’t hit with excessive lag. 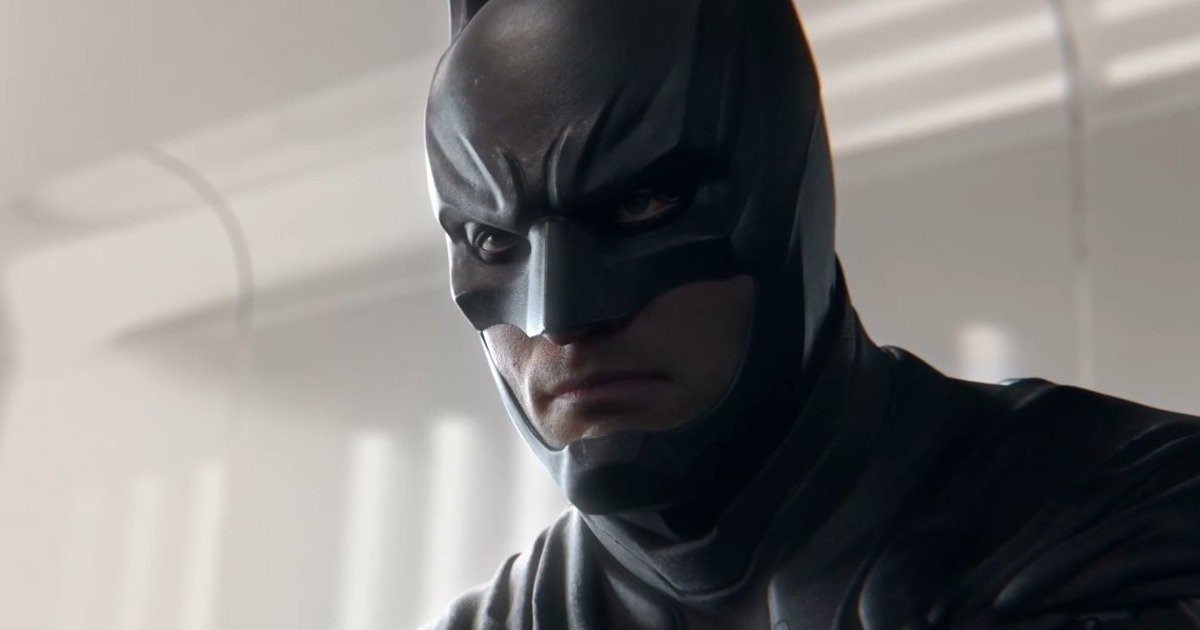 As touched on earlier, Injustice 2 takes a massive leap forward when it comes to graphics and presentation. Facial animations in particular are astounding in how much they bring each character’s personality to life (Harley Quinn’s maniacal eyes deserve particular props) and everyone in general looks more realistic, just in heavily stylised and instantly recognisable costumes. Playing on PlayStation 4, the 1440p upscaled image to 4K produced an incredibly impressive visual treat, and with general gameplay in 60fps, fights are smooth and cinematic. 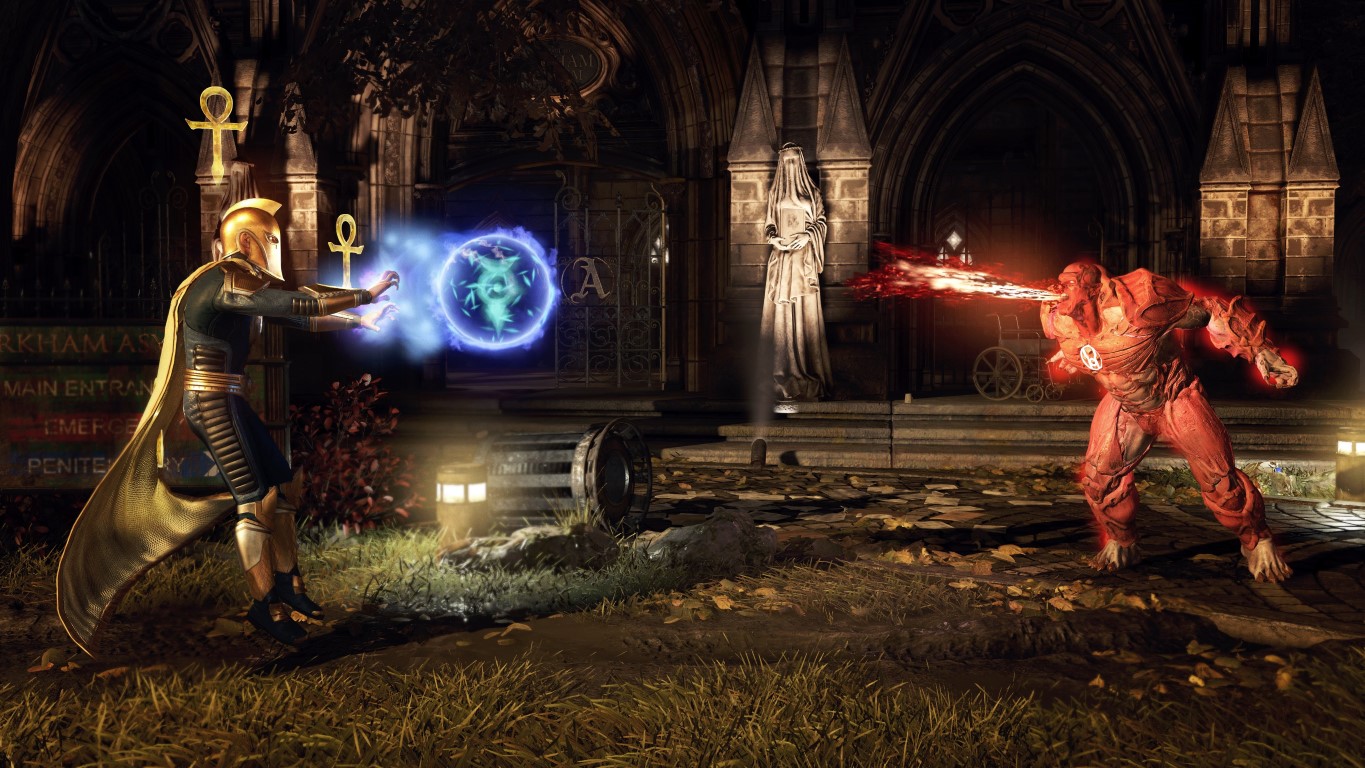 Sound is equally great, with immersive soundtracks accompanying each unique fighting arena and every voice actor killing it in their roles. NetherRealm Studios managed to snag several long-time collaborators of the DC Extended Media Universe and as a result, fans are treated to the iconic and irreplaceable talent of Kevin Conroy (Batman), Phil LaMarr (Aquaman and John Stewart), George Newbern (Superman) and Khary Payton (Cyborg) alongside equally talented newcomers.

Injustice 2 is the definition of a blockbuster fighting video game done right. It has a budget many other contemporaries can only dream of to fully render and realise the glorious craziness of the DC Comics Universe with incredible graphics and visual presentation, and the developers went the extra mile to absolutely nail the personalities and quirks of the game’s varied cast of outlandish superhuman denizens in both gameplay design and aesthetic. With incredible value in the breadth of both single-player and multiplayer content on offer. This is the new gold standard for fighting video games in 2017 and onwards, and with tons of DLC support and a thriving online community, it isn’t running of steam or value any time soon.