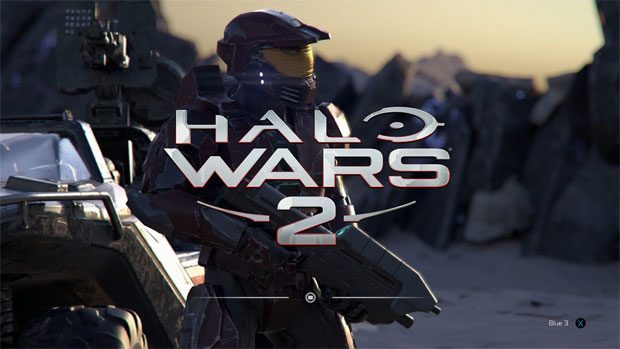 Summary: A slightly simplified real-time strategy gaming experience perfect for Xbox One but still highly playable for Windows 10 PC gamers looking for fast and frantic multiplayer skirmishes with keyboard and mouse. Also a worthy narrative addition to the Halo franchise.

Halo Wars 2 is the unlikely sequel to one of the first major console real-time strategy video games people never knew they wanted so bad. Driven by the strength of the Halo brand, the first game defied expectations in 2009 but didn’t set the world on fire, yet eight years later Microsoft has entrusted Creative Assembly (Alien Isolation, Total War) with oversight from 343 Industries to have another crack at the RTS genre, this time on both on PC and Xbox One as a Play Anywhere flagship title (buy digitally on one platform, get it on the other). While the sequel delivers a stronger Halo storyline than the most recent mainline entry, it is a fairly simplified experience – but still an enjoyable RTS game in general. 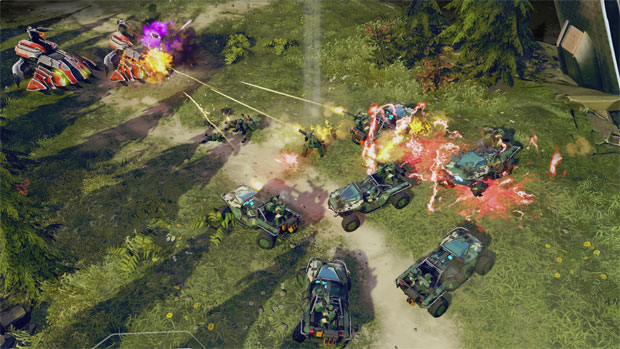 In Halo Wars 2, players command an army of UNSC or alien troopers via a bird’s-eye perspective of the battlefield and issue them orders in real time while micromanaging a base of operations to build new units, facilities, upgrades, defences and resources for further expansions. Fan favourite Halo staples like the UNSC marines, Elites, Brutes, Grunts, Hunters, Warthogs, Scorpion, Ghosts, and Wraiths make an appearance to remind us the spin-off is serious about extending the best of the Halo brand from FPS roots to the larger tactical battlefield once more. As one of several leaders belonging to either the human or alien factions, you also have access to a range of special abilities to enhance your army’s survival in combat, such as healing drones or orbital bombardment, but which require careful timing and management of resources to use most effectively. The aim of the game is to dominate the opponent, usually by complete conquest but more often with superior resource management. There are various bonus, side and main objectives to complete which spice gameplay up greatly from becoming stale. 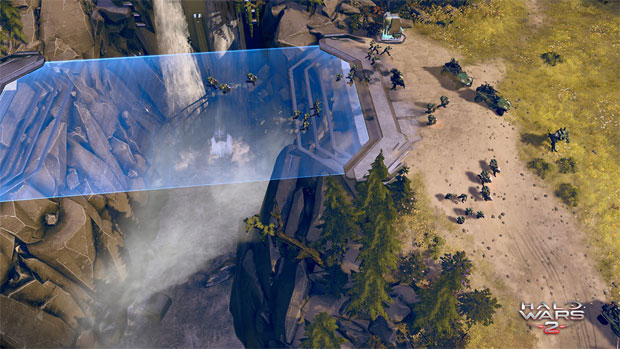 The story campaign is what most people will jump into first. Featuring 12 missions which gradually introduce the game’s core mechanics of base-building and real-time skirmishes, the stages often feels like an extended tutorial to prepare you for the multiplayer modes but the main narrative makes up for it. Set 28 years after the first Halo Wars and months after the events of Halo 5, players command the UNSC space warship Spirit of Fire, which had been declared lost with all hands but in reality had drifted in space with the crew hibernating in cryosleep. Captain James Cutter and company re-awaken when the ship encounters a signal emitting from the nearby Ark, the massive Forerunner structure which made the Halo rings and was last seen in Halo 3. Unaware of whether they won or lost the Human-Covenant War, Cutter sends his Spartans (the same generation of super soldiers as Master Chief) ground side to investigate where they encounter the dangerous Brute warlord Atriox and his Banished, a massive group of former Covenant aliens who broke off during the Human-Covenant War and have invaded the Ark. Despite being low on supplies and manpower, Cutter decides to fight rather than retreat and prevent the Banished from acquiring whatever it is they desire from the Ark.

The developers of Halo Wars 2 interestingly forgo the original game’s self-contained narrative structure to produce a sequel much more connected to the mainline and expanded universe of Microsoft’s sci-fi juggernaut. References are made to factions and events from previous games; as a result, both casual and hardcore Halo fans can expect a more engaging main story and cast of characters, all bolstered by incredible in-game cinematic cutscenes by Blur, the same CGI animation studio who handled the first Halo Wars. In-game, the characterisations of Captain Cutter, Professor Anders and the three main Spartan-II heroes are shoe-horned into somewhat traditional militaristic archetypes, but the Blur-animated cutscenes give the voice-actors just enough to work with to rouse players into winning the story’s main conflict of human versus alien in an unknown, unfamiliar territory – just like Halo should be. The new AI character Isabel and her VA is particularly engaging, teaching her newfound allies about the state of  the galaxy now versus the one Captain Cutter and crew left behind 28 years ago. 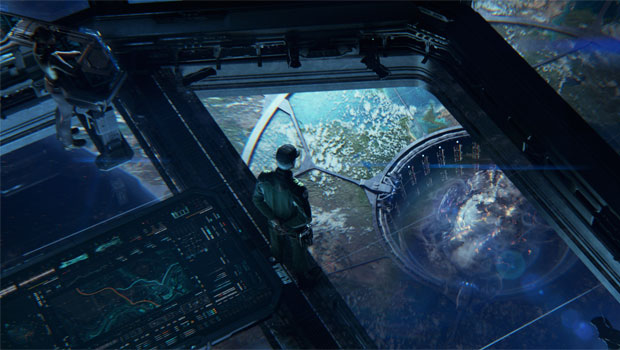 As a Halo lore fanatic, I particularly enjoyed the Phoenix Logs, in-game collectibles which adds new text entries and expands upon the characters, setting and history of the universe – offering some tantalising answers for long-time unanswered questions of the Halo mythos (like how the three Spartan-IIs of the Spirit of Fire fit with the conflicting information we already got in the books). I was pleasantly surprised to see a return to some classic design aesthetics of the Bungie-era in terms of how the Banished looked. Brutes are as we remembered them, snarling and monstrous beasts, while Elites don the elegant armour designs seen in the original trilogy compared those of the most recent mainline Halo games, which strayed a little into something more tribal.

As for the game’s other modes, Deathmatch is classic last man standing and Skirmish is jump-in versus, both of which let you play co-operatively or solo against AI in 2v2 or 3v3. Domination focuses on base and map control for seizing victory, pitting 3 to 5 players against each other to seize strongholds, complete objectives and smash each other down for bragging rights. Strongholds grants unlimited resources and gives every player all upgrades for those who simply wish to get right into the thick of it immediately. 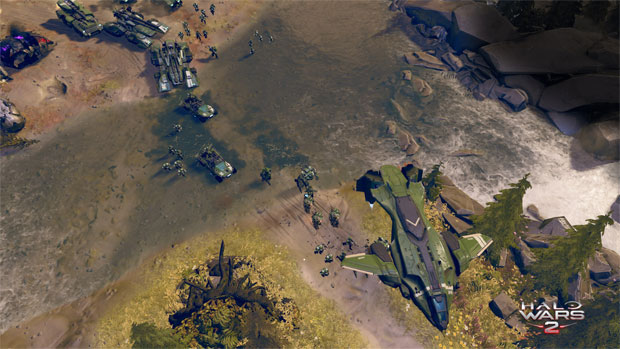 Blitz is arguably the most advertised multiplayer mode for Halo Wars 2 that 343i really want players to try; it replaces traditional RTS base-building and resource management mechanics with collectible card game elements. Players need to take over three points on a map to begin a score count over your foes, using what’s available in your deck to deploy units, abilities and upgrades and win a match. These cards are gained after completing in-game challenges or campaign missions, and can be used to create the ultimate deck. It is also where the game’s microtransaction elements come in, and if you are familiar with Halo 5’s REQ point system you will understand the approach the developers went for in Halo Wars 2. Unfortunately, it seems a whole more expensive here and is just another recent example of Microsoft’s games as a service design model popping up in its first-party IP offerings. Thankfully, it is limited to just Blitz, so players who dislike microtransactions (as I do) can avoid it completely.

Playing an RTS on console is somewhat less precise than with a classic keyboard and mouse setup, but Creative Assembly has managed to translate the genre’s fast-paced and demanding tactical gameplay experiences to the Xbox One controller. A more simplified interface and command inputs awaits newbie and experienced RTS players which works to a satisfying degree, but a lot of patience is required to master all of the different complex commands with only a dozen buttons available. The user-defined groupings of units proved extremely helpful, accessed by holding the right trigger and assigning them to the d-pad to cycle through them. Overall the controls are a lot less worse than naysayers would often have people believe – it’s mainly other problems, like units moving way too slow when selecting multiple groups to perform the same action together, that hinder the responsiveness required to succeed in this type of game. 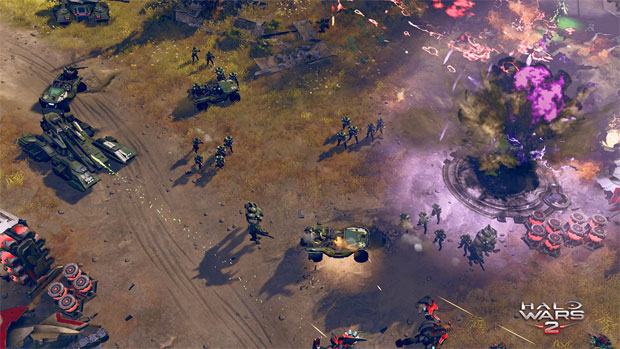 So, is Halo Wars 2 a much more simple RTS than those found on PC? Yes, it is, but that does not make it necessarily less fun. Maps are a lot smaller than traditional RTS games, base building is simplified with less buildings and upgrade paths to unlock, and there are only two resources (energy and power) to manage. But the general moment-to-moment gameplay is top-notch, with fast and frantic battles which can change at any moments thanks to the paper-rock-scissors balancing act between infantry, air, and vehicle units, and the spice added by the unique abilities of the game’s leaders which can change the tide of battle at any given moment. The AI also prove to be a genuine challenge even on Normal difficulty (I dare you to try Heroic or Legendary on your first playthrough) which made my story campaign playthrough much more intense, and the multiplayer co-op and PvP modes on offer are robust and fun when your opponents know the in’s and outs of the game.

Halo Wars 2 fills the niche for a console-accessible real-time strategy game admirably. With a simultaneous Windows 10 release, PC gamers who loath console controls can also enjoy 343 Industries and Creative Assembly’s tactical take on Halo with keyboard and mouse, catering to both types of Microsoft’s RTS fanbase. With an interesting main narrative, fun competitive multiplayer modes and the general Halo spirit intact, Halo Wars 2 is an unexpected but very welcome sequel to Halo Wars worth a try for fans of the franchise and RTS games in general. 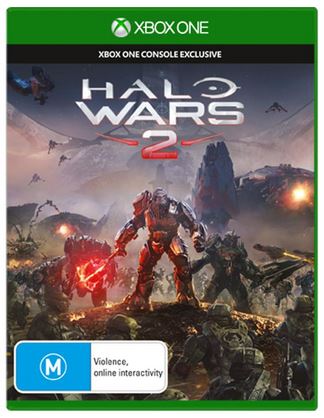