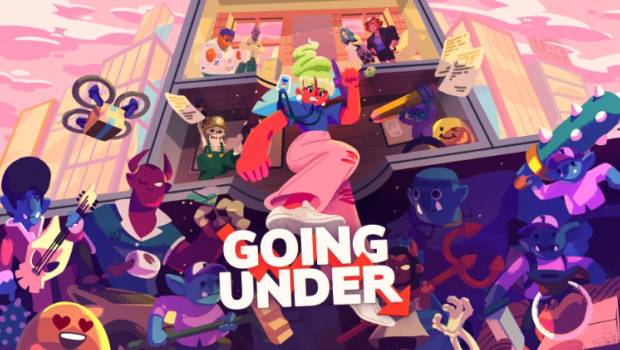 Summary: Going Under is a roguelite x beat 'em up hybrid that satirizes contemporary work culture with a satisfactory dungeon crawling experience.

Work a 9-5?
Feel zombified without caffeine?
Tolerate lazy co-workers?
Avoid your ‘KPI’ driven boss at any cost?
Regularly think ‘what is the point!?’

If you checked at least one of these points, then I have excellent news: Going Under provides pure videogame catharsis on contemporary work culture. The bad news? You’re still going to have to go to work tomorrow.

Developed by Aggro Crab (and published by Team 17), Going Under is a roguelite x beat ‘em up hybrid that plates up a biting satire of neoliberalism and modern tech culture. The title follows Jackie Fiasco, an unpaid intern at ‘Fizzle’, a hip carbonated drink start-up located in (definitely not San Francisco) Neo-Cascadia, as she’s instructed to dispose of the monster infestation in Fizzle’s basement. What emerges is a tale that playfully ribs on our collective neoliberal prison, and in doing so, aggressively points towards the oppressive, meaningless nature of it all. Thankfully, Going Under provides a gorgeously vibrant and chaotically fun, though underdeveloped, state of play to soothe our existential pain.

Going Under sticks to the conventions of the roguelite genre, containing procedurally generated dungeons and foes, and elements resetting for each run. All runs also have a defined end goal – defeat the dungeon boss, collect their cursed relic, and bring further economic prosperity to Fizzle (and its boardroom overlords). Beat ‘em up elements see Jackie engage in fast-paced melee (and ranged) combat, her movement consistently slick and input responsive. Environmental engagement is maximized, with weaponry readily available and comically taking the form of almost anything in dungeon areas. For example, in WinkyDink, a failed dating app start-up turned demonic love hotel, Jackie can wield squishy body pillows, a ‘poking’ tool, and devil tridents. All weapons have durability also, typically enduring one to two areas before shattering, but this rarely feels like a shallow element to increase game difficulty. 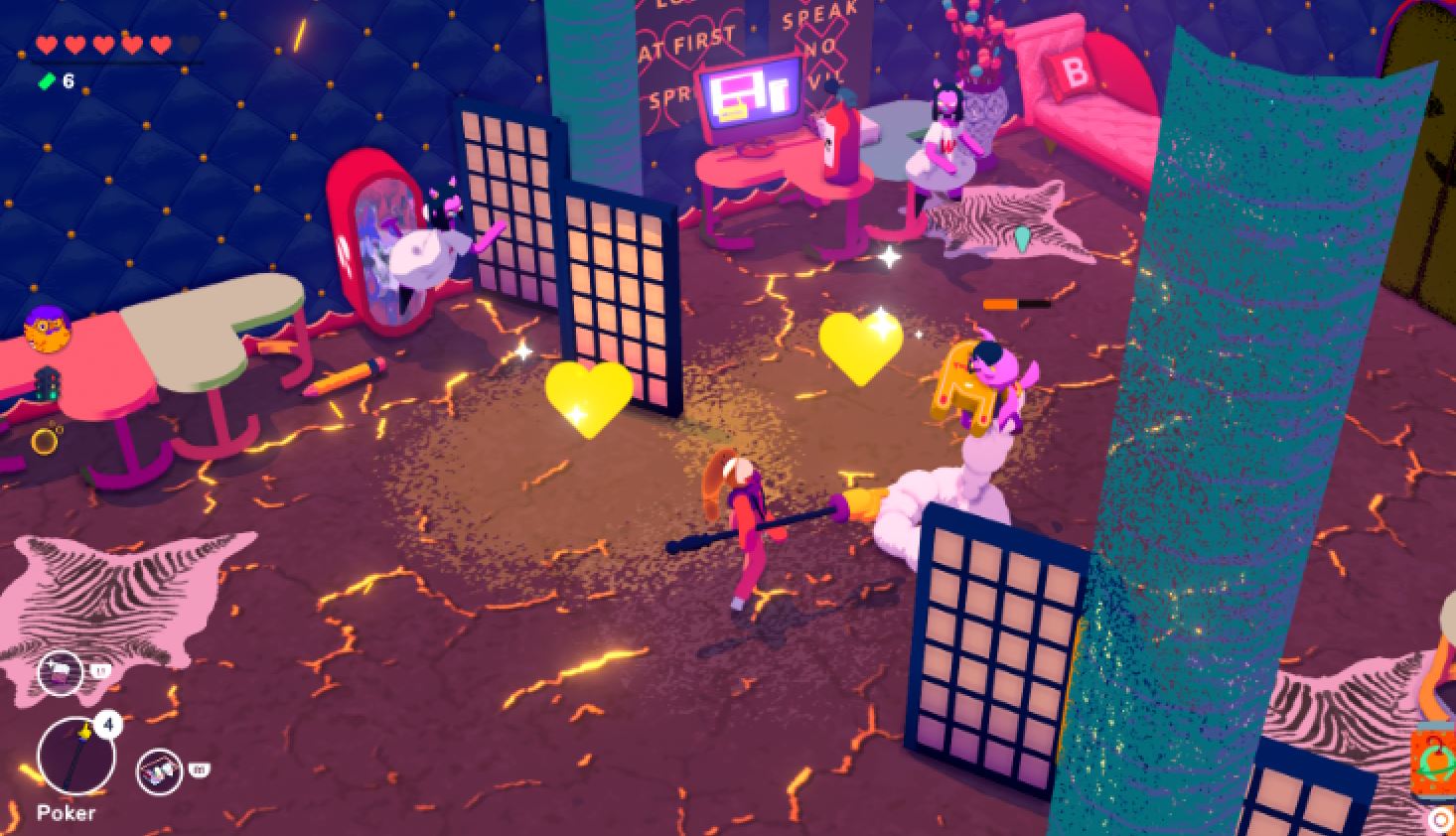 Almost anything can be used as a weapon in Going Under.

Jackie’s butt-kicking skills are buffed by the progressive collection of (randomized) abilities during a run. Abilities are wide-ranging, from your typical stat increases, to the more alluring – i.e. emanating electricity to fry enemies. Alternatively, perks can be provided by a chosen mentor – one of your co-workers at Fizzle. Perks provide you with extra powers, like using experimental Fizzle or phone apps to blow-up enemies and gain buffs (such as ‘Jizzle’, a caffeine app), or getting a co-worker to shoplift stores for you. Perks are necessary add-ons but upgrading them is problematic. Upgrading involves your co-workers providing you with tasks in dungeons, and their instructions can be quite ambiguous in explaining how to complete them. Also, if you quickly finish the earlier dungeons without completing these tasks, they troublesome to complete in later dungeons (you cannot return to earlier dungeons).

Where Going Under shines is in its exceedingly witty and sardonic characters and dialogue. Jackie’s co-workers at Fizzle are cutting caricatures of office personalities – an arrogant CEO, a neurotic accountant, an eccentric food scientist, a lazy barista, and an irritable software engineer. Jackie’s interactions with her co-workers humorously stress their concerns, from the prospect of Fizzle going bust, to worrying about one of their co-worker’s incessant beatboxing teaching their dog ill manners. Humour aside, the narrative accurately shows the precarity of contemporary work – tension, as well as a sense of powerless resignation, is rife at the Fizzle campus. However, Going Under is hopeful – the tenacity of the human spirit, and the power of teamwork, isn’t questioned.

While Going Under makes clear that the lofty expectations of neoliberal work are oppressive for workers, its core combat and progression systems don’t develop as strongly as this message. For example, while the abilities collected can be useful singularly, too often abilities are mismatched and useless collectively. Running riot as a random, but downright lethal, jack-of-all-trades generated much of the giddy enjoyment I felt in the game’s early hours. However, this soured as I tackled later runs. 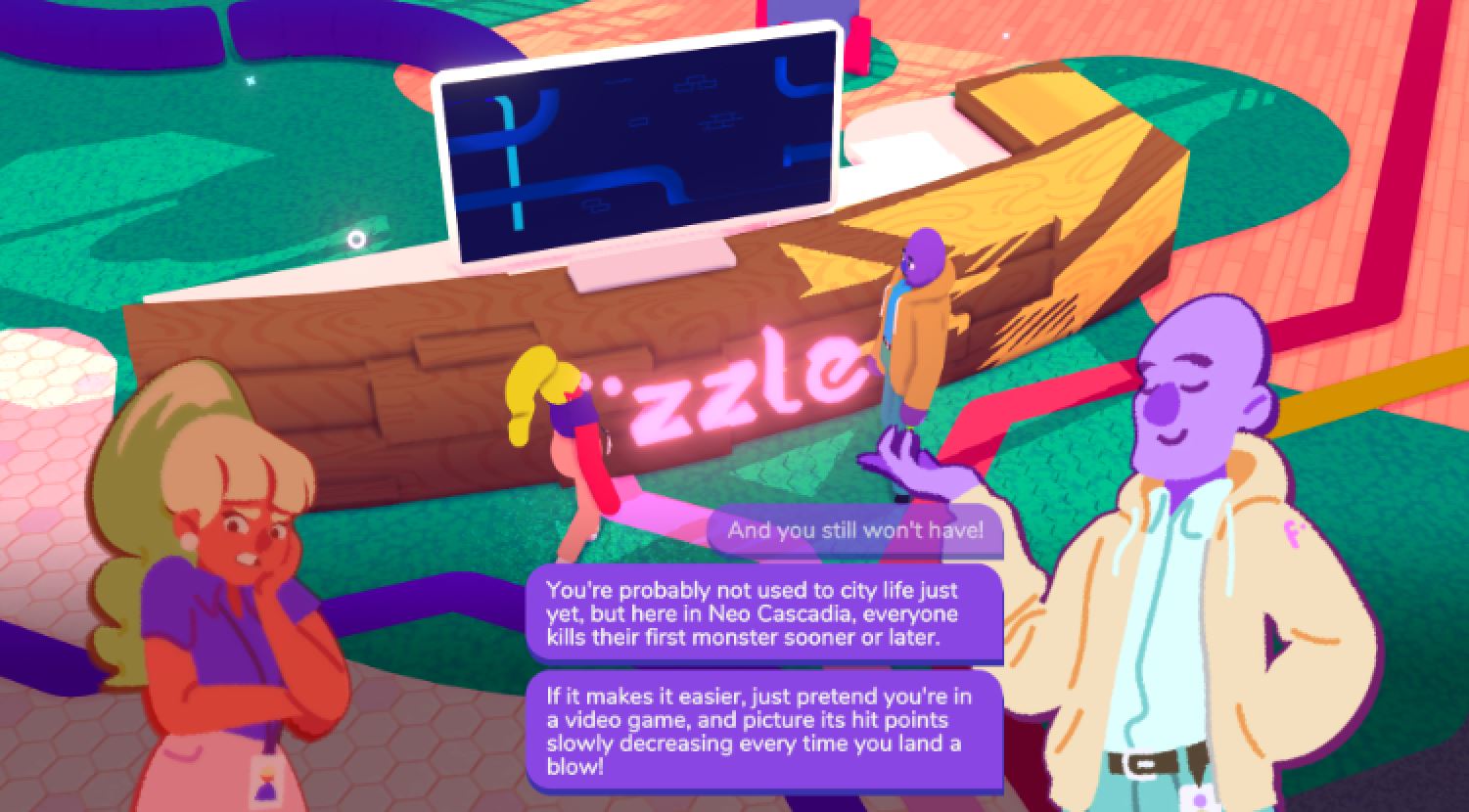 The Fizzle team is composed of surprisingly loveable office stereotypes. They’re shown to be directly impacted by the conditions of contemporary tech culture.

Going Under has a formidable difficulty curve. I breezed through the earlier dungeons, only to find myself scrambling with, and failing runs often mid to late game. This wasn’t due to the increased difficulty provided by stronger enemy types matched with the default weaponry and item choices introduced earlier in the game. Rather, progression systems do not develop alongside this challenge.

Overcoming obstacles in videogames is dependent on experimentation with strategy and build – without a viable strategy, one will struggle to succeed. You’re allowed to equip one ability and mentor (perks) before beginning a run – this does allow you to approach a run with a rough strategy in mind. However, a good dungeon crawler will have you constantly re-assessing your strategic approach. The hotpot of abilities collected during a run rarely contributed to my changing strategy, and I felt left to win runs through personal skill and perks exclusively. This could have been balanced with equipping more abilities before a run as opposed to one, or including more opportunities to grab stronger weaponry and items from dungeon areas by default to offset dire ability matches.

Admittedly, I did generally enjoy the challenge of later runs. I was a clueless corporate newbie, flailing about dungeons chaotically without any distinguished strategy and little to show for my experience. As they are, the combat and progression systems do allow Going Under to present its critique on neoliberalism’s impact on our wellbeing. However, later runs were a deeply repetitive experience in dungeon crawling for this reason – you are always the intern, and never the fledging apprentice. I would have liked to have seen this message realized alongside complex combat and progression systems.

Overall, I would recommend Going Under to those who are open to playing a lighter, yet challenging roguelite with an enthralling critique on neoliberalism.