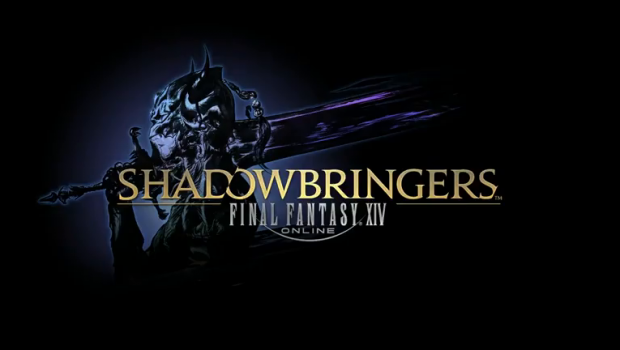 Summary: A beautiful expansion on top of an already amazing journey. If you had any doubts about longevity, Shadowbringerss crushes it.

Forget everything you thought you knew about Final Fantasy XIV during post-Stormblood because Shadowbringers literally changes everything. When previous expansions wrestled with broad concepts like, corruption, religion and imperialism. Shadowbringers makes itself a very personal one, central conceit is the battle between good and evil, light and dark. At it’s core however it focuses on you, the character who’s been left adrift and has to come to terms with an identity crisis of sorts. Whilst searching for a way to rescue your companions stuck in eternal slumber after the events of post Stormblood, you’re called to a dying world that they’ve been trying to save. This pays homage to the more linear and non-mmo style Final Fantasy has provided for decades. Shadowbringers isn’t lesser for it though as it comes off very forward looking. A lot of fans were left pondering the longevity of the game post-Stomblood and after Shadowbringers I fully believe you’d be hard pressed to find someone still questioning that now. 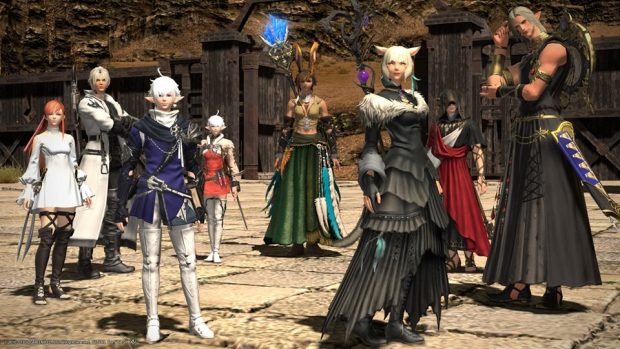 Gameplay hasn’t changed a whole lot, or at least, not for me. I wasn’t playing back when A Realm Reborn first released, I joined in the Stormblood era. Hardcore players will tell you how upset they are with some changes to healers and tanks specifically. I for one haven’t really felt the changes as they have, I do know that the idea was essentially to simplify both roles to make it easier and hopefully more welcoming to new players to get into and play these roles.

Being somewhat of a jack of all trades gamer myself I found it relatively easy to adapt to these changes and thus I felt I had little to critique the devs on. To make a brief run of the role changes; Tanks lost their DPS penalties and damage reducing buffs in tank stance in favor of straight enmity generation. Some moves were removed altogether while others were replaced or remodeled. Healers most notably lost the Protect spell and a few abilities were reworked. I only main White Mage, among the healers, which apparently had the worst of it, but as stated above, I haven’t really noticed a huge difference.

The biggest notable change I felt; the TP gauge was removed and MP gauge standardised across all classes. TP being what you used for weapon skills and MP for magic skills/spells. TP being removed entirely means that any skill that used TP to cast in the past, can now be cast without additional cost outside of the skills’ recast timer. This was a big improvement I felt, especially for AOE (area of effect) skills that required large amounts of TP to cast. This means dungeons have become a lot more manageable, as it means that more enemies can now be taken on at once so long as the tank and healer are up to the challenge. MP being standardised across all classes however, I felt might cause a few minor issues. 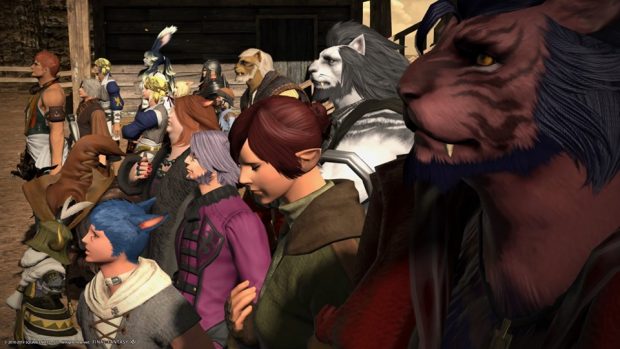 MP management has always been a thing in the game, even before the change and whilst the MP cost of pretty much all spells have been reduced to compensate, I still feel like it hasn’t really addressed the previous issue, it’s now more of a tactic to manage MP. To some this might weed out the average player attempting end game content making it easier for the hardcore players to get better players, but as a direct result I feel it may cause more of the casual player base, to avoid some end game content. With this in mind, some new players may find Caster classes a little tricky at first, but given some time to adjust to the new management skills and costs, they’ll likely pick it up pretty fast.

One of the major changes brought in was the Trust system. This addition allows the player to take the NPC’s they fight alongside with throughout the story, with them into the games’ up to now “multiplayer” dungeons. For a soloist like myself, who likes to be able to select content and just jump right in, who doesn’t always like to require the assistance of others, just to progress my way through a game, this is a welcome addition. Don’t get me wrong though, the community is mostly great and I do enjoy playing alongside my guild members, I just prefer it if it was an option, rather than forced.

No doubt new players looking to dip their feet in before diving into the community head first will likely appreciate this touch also. It definitely makes the game feel a bit more immersive as the characters you’ve always been alongside in the story and are usually there “in spirit” during a dungeon you used to be forced to matchmake for, can now really be by your side for the full journey.

My only gripe with the system is in post-Shadowbringers, that is after the final quest step, where the NPC’s then have to level up alongside you, in order to participate in the same dungeons you’ve already run. The Trust system is limited to Shadowbringers dungeons only.

This wouldn’t be such a bad thing, if it weren’t for the massive amounts of exp you need to level each one individually, 13Mil to progress from Lv71 to 72. Considering each need to be leveled individually from you and from the other NPC’s and only get 2.5mil for each run of the first dungeon, you would need to run a total of six times for each light party, a total of twelve times for all six NPC characters. And that’s just for the first dungeon, exp required and exp gained increases for each dungeon, but will likely take at least a dozen runs to level everyone equally. I foresee this to be a tiresome and boring task, so I hope at the very least the exp gained per run can be granted to all NPC’s simultaneously to limit the insane number of runs it’ll likely take. 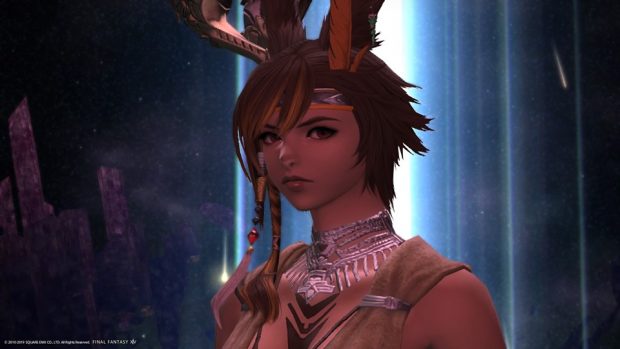 Game graphics are amazing as always, Viera and Hrothgar, or more simply, slender bunny girls and muscular cat men, have finally been added after much desire. They initially caused some division by being gender specific, but all that seems to have died down in appreciation of how good they look. I myself, changed from a Miqo’te (Cat girl) to Viera and while I’ll probably change back eventually once I’ve had my fill of Viera, I love the level of detail in the new races. I love that that’s a thing players can do for a relatively marginal fee. It’s always great to see we’re not bound to a characters’ appearance after the initial creation since our characters are, by proxy, an extension of ourselves and need updating from time to time as we ourselves change.

The new locations are simply gorgeous, a staple of the series as a whole has always been beautiful landscapes and art. Shadowbringers does not disappoint, it in fact, takes it to a whole other level. Lakeland, the first area you’re graced to see, is shrouded in a purple forest, how often do you get to see that even in fantasy realms? Amh Araeng, a desert littered with fierce fortresses and smothered in harsh sands, where the flood of light was halted and crystalised in a giant wave. Kholusia, a desolate plateau, devoid of plant life, an extravagant castle off in the distance where the rich live out their last days, ignorant of the poor and downtrodden below.

Il Mheg, a lush colourful land of the Fae, faeries and other phantasmal creatures. Rak’tika Greatwood, swampy, larger than life forest with the ancient tombs dotted in the background. Lastly, the Tempest, an underwater wonder, with coral stretching as far as the eye can see. An ancient Ascian (the name belonging to the race of secretive antagonists throughout the game) metropolis transported from another world and hidden away in the depths. Character and action animation have also had some improvements made. It’s all amazingly done and much like the art of Stormblood continues to blow me away at the level of detail, even if I’ve come to expect that level of skill from Square Enix. 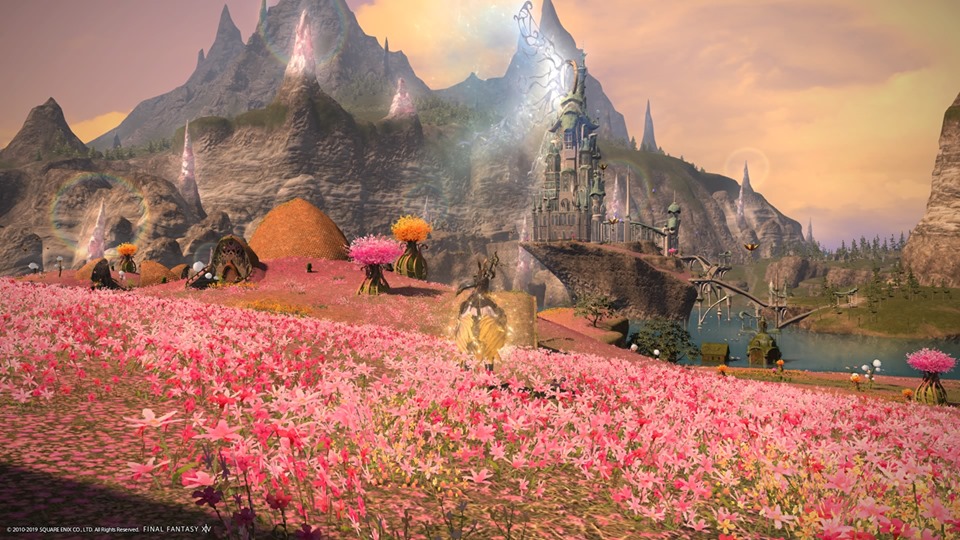 Audio too, is astounding. I have always enjoyed the theatrical scores of orchestral music throughout the Final Fantasy series and in XIV itself, but between Stormblood and Shadowbringers, there is some simply amazing scores. Shadowbringers alone, brings a blend of different music styles to the table that really coincide with the expansions new theme of Warrior of Darkness and there’s some really heavy emotional pieces that come in when things seem utterly hopeless. I think the only musical piece I couldn’t really get into was used in early Eulmore where it sounded very carnival-esque and that stuff is just creepy. It’s what they were going for sure and they did it well, I just can’t stand that sort of carousel music, I’ve always loved that each location has it’s own day and night themes, I know it’s probably just another excuse to flaunt their musical talent, but I love it all the same.

The voice acting too, is a cut above what it was in  Heavensward and Stormblood, Bethan Walker’s portrayal of Alisae Leveilleur in particular was exceptional, the emotion she brought to the character really sold me on the performance. Others definitely gave their characters a lot more depth than ever explained before.

Shadowbringers brings a completely new level to an already fantastically evolving world. From it’s deep, personal story about inner conflicts and shattered, dying worlds. To it’s emotional cast, musical scores and gorgeous landscapes. Even at the stage I am having only just completed the main story, there is still lots to do, the main story is but one half of a game like this, the end game phase is something else entirely and I’m excited to continue the journey and can’t wait to see what’s next. Well worth, the $70 AUD digital download for the base version, but if you’re a sucker for a little extra, for an extra $20 AUD you can get your hands on a mount that normally sells for about the same as the whole pack, a Fran minion and a replica of Squall’s Revolver from Final Fantasy VIII, well worth the extra dough I think. 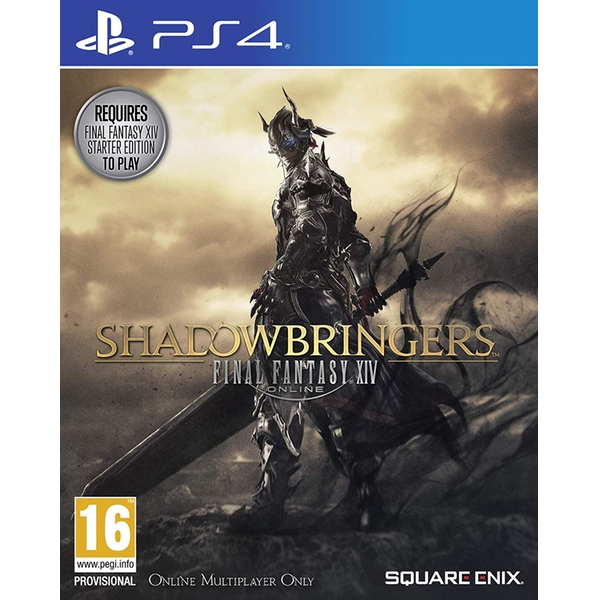