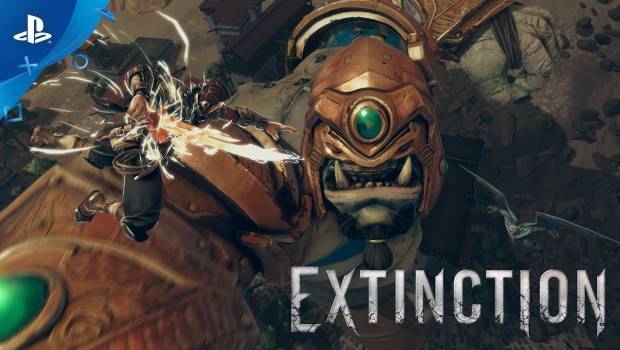 Summary: Since Extinction is currently retailing at a mind-boggling $99.95, the same price as a Triple-A title; somebody, somewhere, is taking the piss.

Developed by Iron Galaxy and published by Maximum Games, Extinction is an action adventure game that sees you assume the role of a warrior named Avil as he fights interdimensional 150-foot tall monsters.

Known as “one of the world’s last defenders” one would think to play as Avil as he defends humanity against these massive brutes would invoke some excitement. Unfortunately, this isn’t the case, and not only is Extinction void of any real zest, it isn’t even remotely enjoyable. Plus, since Extinction is currently retailing at a mind-boggling $99.95, the same price as a Triple-A title; somebody, somewhere, is taking the piss. 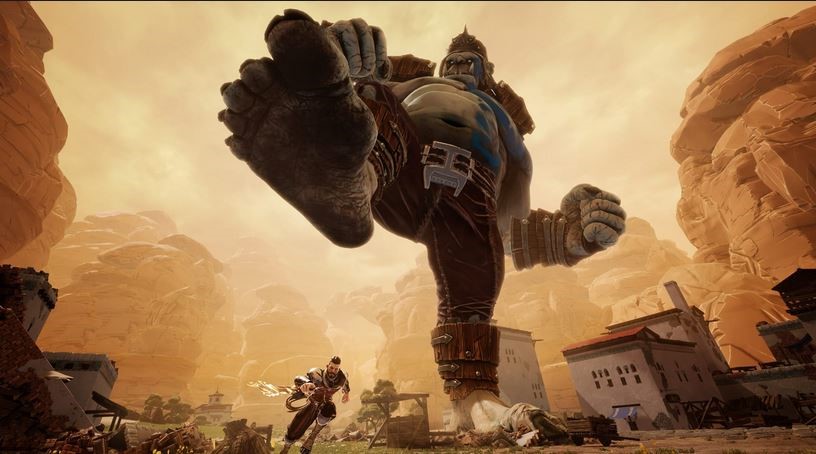 As one of the shittest games, I’ve played, ever, surprisingly, Extinction’s premise is quite good. As Avil, you are one of the world’s last Sentinels defending humankind against giant ogres named Ravenii. These bloodthirsty brutes are comparable in size to several of the giants in Shadow of the Colossus and require a similar strategy to defeat. By climbing each creature and breaking their armour and stabbing at their limbs, each beast eventually weakens which lets you decapitate them as they fall to the ground faster than a pissed up Shrek.

The first time you conquer one of the Ravenii is pretty satisfying until you realise that less than an hour into the game, Extinction has reached its peak. You’ve virtually seen everything there is to see once you’ve completed the first chapter. Throughout the total playtime which is around 8 hours long, aside from being different colours, all of the ogres’ look and function in the same manner. There is zero variety in their design and behaviour which stinks of laziness on the developers part. Furthermore, there are only three fundamentals to the entire game: kill the attacking Ravenii, defend towers and save civilians. That is it.

Killing the Ravenii is a task unto itself, not so much because each provides any sort of challenge, but more so due to the gameplay mechanics being buggy and unresponsive. I lost count at how many times I inexplicably fell to the ground while scaling each creature, or got stuck between its limbs as Avil began to uncontrollably quiver like he’d just snorted a gram of Heisenberg’s finest.

However, these annoyances only exist once you manage to scale the bloody Ravenii in the first place. The physics are completely broken, as when prompted to press a button to leap off a building onto the monsters, it’s anyone’s guess as to which way Avil will jump. And since you have zero air control, more often than not he’ll end up back on the ground or land directly next to the Ravenii’s club where he’s then greeted with a welcoming bash around the noggin’.

As for the other modes, defending towers doesn’t get the heart pumping and saving civilians merely consists of approaching crystals and pressing a button. As you attempt to rescue these civilians, small goblin-like creatures will attack you from different directions. Some of these enemies are airborne, and you can hop to each while slashing away at them. That is, however, if Avil actually targets them correctly as more often than not he’ll miss or propel himself in the wrong direction. All this for $99.95? Riveting stuff. 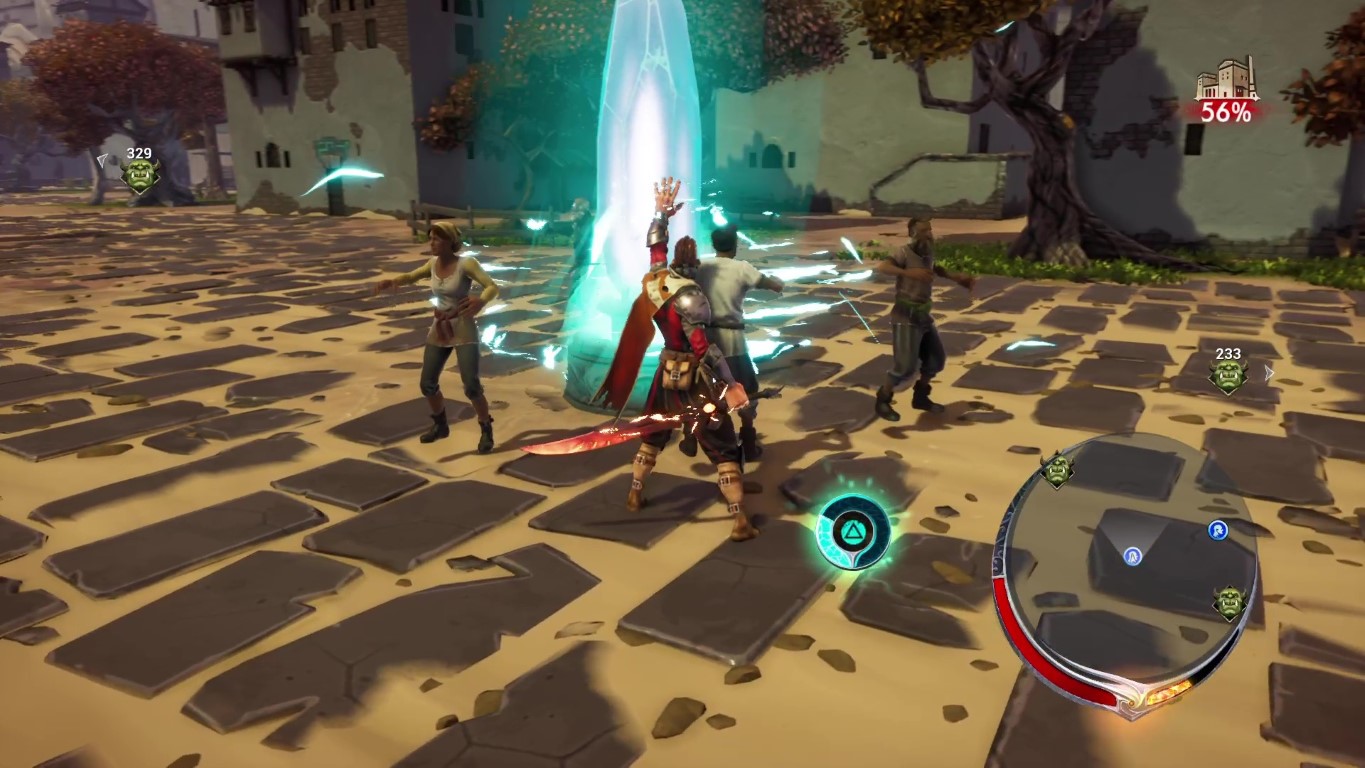 Since Extinction is a fantasy game, it should at least look decent but sadly, there’s nothing nice to look at here. The ogres all look identical and for their initial concept, I wouldn’t be surprised if the developers visited their local animal shelter and asked some dogs to draw Shrek with crayons.

The maps are dull and pretty much the same throughout and the voice acting, although certainly not done by canines, is some of the worst I’ve ever heard. There were times I just muted the sound as even though reading the dialogue was harsh on my eyes; it was less painful to my ears. 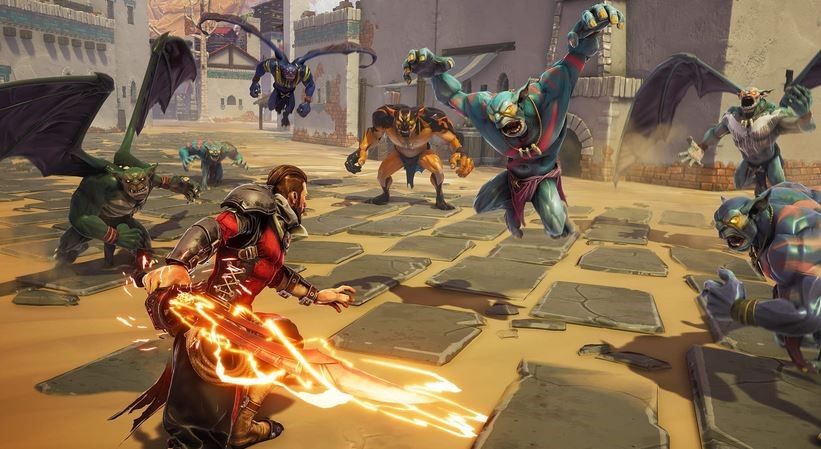 Perhaps this review seems a little harsh but please bear in mind that Extinction is a terrible game that is retailing close to one hundred dollars. That is, without question, day-light robbery. This mess isn’t even worth close to half of that, in fact, I wouldn’t even recommend playing it for free. Sure, there are worse games out there, but how anyone in good conscience could greenlight Extinction’s release at the price of a Triple-A game is insulting.

An overpriced, half-assed mess; Extinction is, without doubt, one of the worse games I’ve ever played.