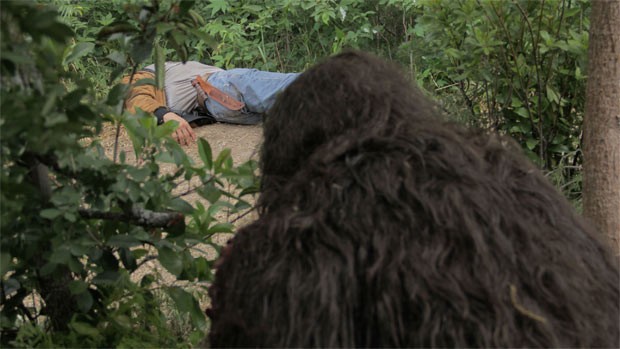 Summary: Exists is a real disappointment as a viewing experience.

While lined up at my university bookshop many years ago, your reviewer was perusing the horror magazine he intended buying.  The article in question discussed the preponderance of what the writer called ‘shreddies’ in modern horror fiction at that time.  Shreddies were described as characters the writer built up over the course of a chapter, often at the beginning of the book, who were then cut down by the homicidally inclined pervert hiding in the bushes as the buxom victim bounced past.

I raise this in relation to the found footage movie, ‘Exists’, which is full of characters who are the pure embodiment of the shreddie.  They exist purely to be picked off one by one in a variety of improbable and gory incidents, providing wincing amusement for the viewing audience.  The problem here is that unlike the luxury of having several thousand words to build a rounded character, in the world of fast paced movies, these hastily sketched characters are symptomatic of a deeper problem with Exists – the lack of interest the entire exercise engenders in the viewer. 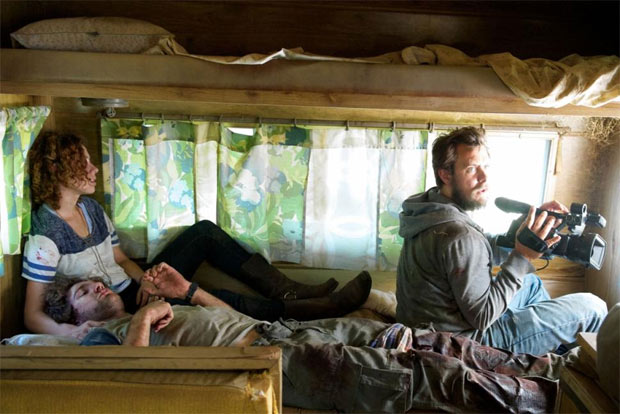 The plot is as paper thin as the characters.  Bright young things with fun on their minds and more video cameras than is healthy drive to a remote location for fun and frolics.  Along the way, they hit ‘something’, incurring the wrath of the creature’s parent, a Sasquatch.  Cue, bloody mayhem.

Helmed by Eduardo Sanchez, co-director of The Blair Witch Project, Exists captures a little of that earlier movie’s feel.  The woodland setting is similar, as is the tone and found footage nature of it.  However, that’s where the similarity ends.  Where Blair Witch is a deeply unsettling movie that creeps up on you before grabbing you by the throat, Exists is a slow burn movie that never catches fire at all.  It’s competently put together, and thankfully doesn’t outstay its welcome, but it doesn’t aim for anything better than average.  Which is a real pity, as the setting of the remote woods should’ve allowed for a creepy atmosphere sadly lacking in the actual film.  The characters travel to the literal middle of nowhere, where untamed forest and tangled undergrowth present endless opportunity for something to lurk menacingly.  There are no city lights, no mobile coverage and none of the modern day conveniences.  And yet the menace is palpably missing.

Instead, the movie spends far too long trapped in a scruffy cabin straight out of The Evil Dead (alas, no Ash or chainsaw in sight) where the characters (led by brothers Brian (Chris Osborn) and Matt (Samuel Davis) seem to endlessly shuffle furniture around and talk to each other about what little plot there is.  This just serves to kill the atmosphere stone dead.

Aside from the lack of atmosphere, it’s the poorly written characters that really let the movie down.  They are pure roadkill, designed to be slow moving targets for the rampaging Sasquatch bent on revenge.  The acting is optional and the dialogue perfunctory at best.  The two female characters (Dora Burge and Denise Williamson) are woefully underwritten, which is a real shame as the genre has long embraced the idea of strong, independent woman.  Where you have characters you don’t care about, their eventual fate only serves to further disengage you from the movie.

A smarter reviewer willing to blow smoke for his readers might be happy to claim Exists is an allegory for America’s involvement in the Vietnam war (no, really) or a critique of America’s position in the world today (yes, really).  Happily, I’m not that deluded.  Exists is a real disappointment as a viewing experience.  There are better movies out there worthy of your time.

Overall – half-baked and without an original idea from beginning to end, Exists is at the shallow end of the found footage horror movie sub-genre dominating horror movies today.  There isn’t a sympathetic character, and while the ending might reach for something slightly different, in the end, this is an indifferent movie not deserving of your time or money.  The Sasquatch make up is quite good, though.  1/5

Visual: a mixture of recording formats plus some fake video interference add a modest amount of cinema verite to the proceedings.  Otherwise, this is clearly a movie shot on a variety of mediums and suffers accordingly.  2/5

Audio:  some of the better work here is in the eerie howls that echo through the woods.  2/5

Extras:  a trailer which gives away 99% of the plot serves as the only extra on this release.  1/5 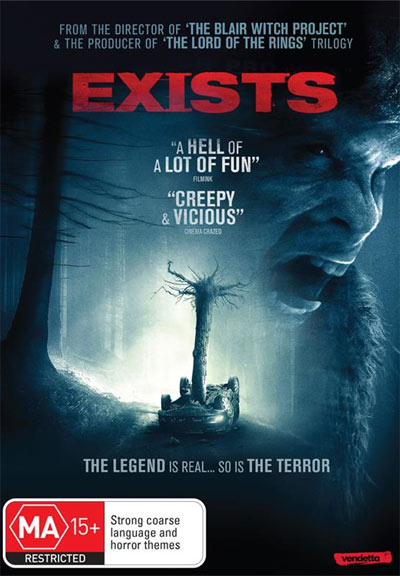