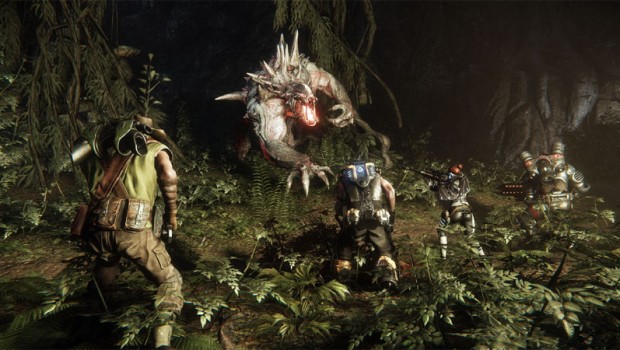 Summary: Evolve is a beautiful amalgam of a first person shooter meets third person that is set in a very engaging gaming universe

Evolve is finally available for the PC, Playstation 4 (Reviewed) and the XBox One that is from the creators of Left 4 Dead and really adds something unique to online multiplayer. The game itself is an amalgam of a first person shooter meets third person in this 4 versus 1 game that has four players trying to take down this behemoth monster controlled by another player that has the capabilities to evolve into a more powerful beast. 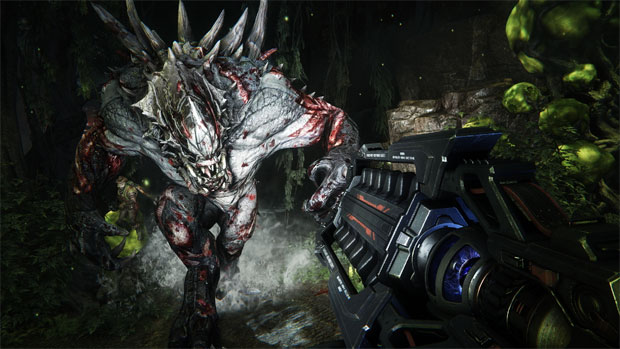 However in order to survive these deadly multiplayer maps, for the humans anyway, they must work as a team and this team is only good as their weakest player. The matchmaking system is also quite interesting as it requires the player to rank which class they would like to play and then it attempts to match you to a game.

It does create an interesting way to play the game online as you don’t always get what you want. Given that, there are four key classes that includes Trapper, Support, Assault and Medic which each have their pros and cons in trying to defeat the single monster. 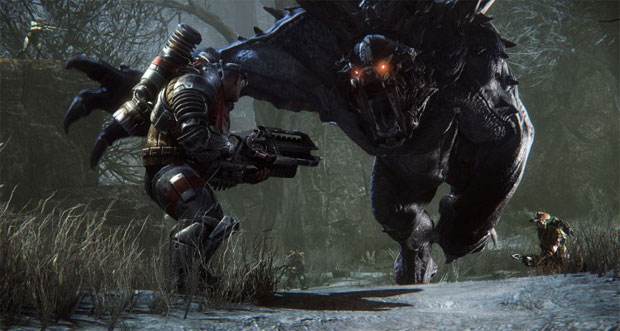 In terms of story, there is a framework that holds the various gaming environments together that in the distant future, mankind has colonised space and one of their frontier planets Shear, is in danger from these powerful monsters which have threatened its human inhabitants with extinction. Your job is simple, prevent these monsters from destroying these colonies by capturing them and then killing them. As a monster, you need to destroy all traces of these meddlesome humans!

Given that, the game can be played in single-player mode with bots, however you cannot beat the unpredictability of a human controlled character, especially the monsters themselves with their varied abilities and unlockable powers. Even so, playing it single-player still gives the gamer a challenge and the AI is quite decent. 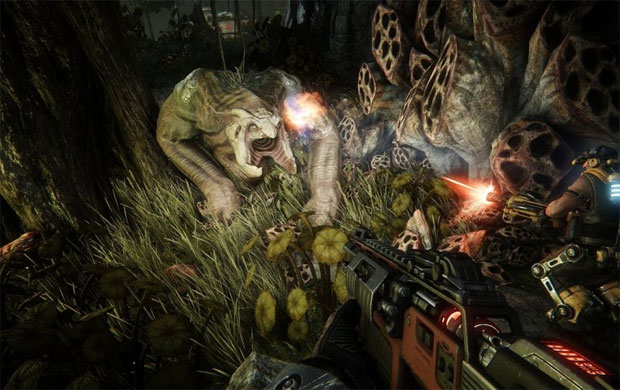 There are a total of 12 characters available, each with their own perks and personalities plus 3 monsters to choose from with some grinding required to unlock the other playable characters. The 12 different characters are linked to the four classes that include Markov, Hyde and Parnell as Assault, Val, Lazarus and Caira as Medic, Griffin, Maggie and Abe as Trapper plus Hank, Bucket and Cabot as the Support crew.

Perks are level based and may include fun powers like additional damage or reload speed to increased movement speed or with the Monsters, it may increase your feeding speed, add armour or even increase your stamina. There’s quite a few perks to be found!

My favourite characters in the game besides the monsters is the Trapper and the Assault. The Trapper has the ability to trap and track the creature thanks to their harpoon traps and sensors, while the Assault class basically wields the heavy fire power to help take down these monsters.

Monsters are basically split into the Goliath, a lumbering rock throwing firebreathing creature, a Kraken who has the ability to rain lightning on their foes plus the Wraith, who has the ability to use invisibility to help kill her enemies. Although the Kraken and Wraith can fly, the Goliath is pretty much the “tank” out of the three.  Apart from worrying about the monsters, players need to avoid some of the dangerous wildlife on the planet of Shear.

Players are also awarded experience which then allows them to level up and fine-tune their characters. As mentioned, all the four classes has a unique role to play. For example, the Trapper has the ability to trap the creature for a short amount of time and once trapped, it’s up to the others to help defeat the monster, especially the Assault player who has the firepower behind them. 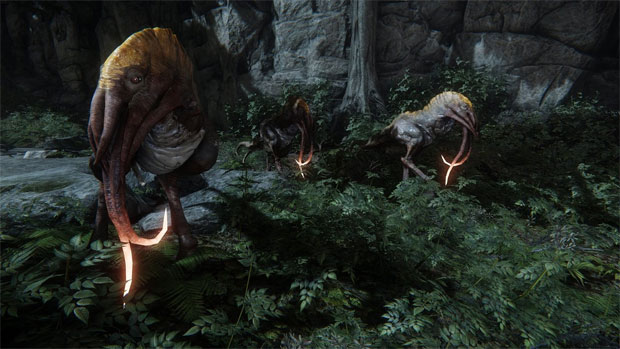 The Support class has the ability to call additional assistance such as the Orbital Strike for the group and the Medic is the healer in the group who is needed to help keep everyone alive. Medics can also tranquilize the creature so it moves slower.

As mentioned, you play the humans in the first person mode which seems quite fast and the environment looks gigantic. However when you play the monster, you need to change your tactics as everything feels a little smaller because of how large your character is and the perspective has moved to third person.

The monsters can also level up and by feasting on the local inhabitants, it allows them to become more powerful, provided they can “nest” and not be interrupted by the humans. So while the players are searching for the Monster at the start of each multiplayer game, monsters must quickly look for sources of food in order to level-up before they are found in this weakened state. 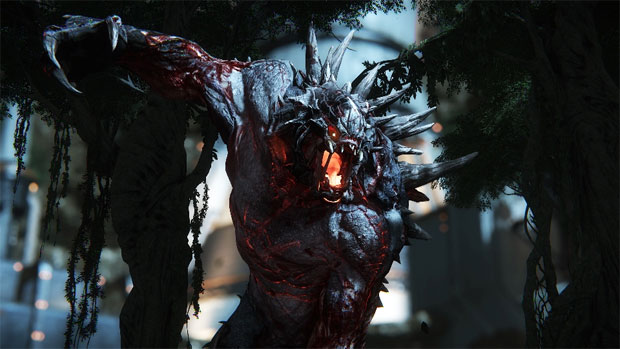 But when you do encounter those pesky humans as the monster, nothing is more satisfying than tearing them apart and destroying their well-planned teamwork. The Wraith was my favourite monster due to her cloaking powers that made it quite enjoyable turning the hunted into the hunter.

Needless to say, tactics play a huge component of this game and although the beasts are far superior in terms of the amount of damage they can distribute, a well-tuned human team can also take down the most powerful monster, provided each of the classes does their job.

Gameplay modes include Hunt (humans vs monsters), Nest (kill six monster eggs to win), Rescue (help the colonists escape) and Defend (protect a set area from a rampaging monster). There is also an evacuation mode which requires players to complete five different stages of the above modes. Add in some mission objectives and there’s plenty of fun to be found.

The controls are well mapped on the Playstation 4 DualShock controller and I really enjoyed how the humans played quite differently than the monsters. So whether you’re playing this in single-player or multiplayer via its “campaign” (aka evacuation) mode or just joining matches to help or hinder, there’s plenty to be found in this thoroughly entertaining game.

Graphically, Evolve is a very impressive looking game on the Playstation 4 with some beautifully created areas that have this real alien feel to it. Environments are quite populated when it comes to foliage, native animals and human designed buildings. I really loved the lighting and the special effects in the game that gives it this great blockbuster feel to it. 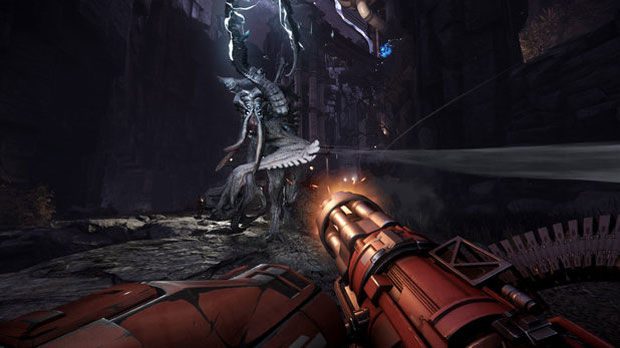 The world of Shear is also quite real such as animals being startled by the monster which if seen by one of the hunters, allows you to pinpoint where the monster may have been but overall, it’s a very interactive world that is quite real like seeing the foliage move as the monster goes through it.

Audio is equally as impressive, especially the subtle sounds of this alien planet and its local inhabitants to the different weapon sounds and of course the beasts themselves like the Kraken’s Lightning powers which literally screams through these alien forests. There’s also some fun dialogue! 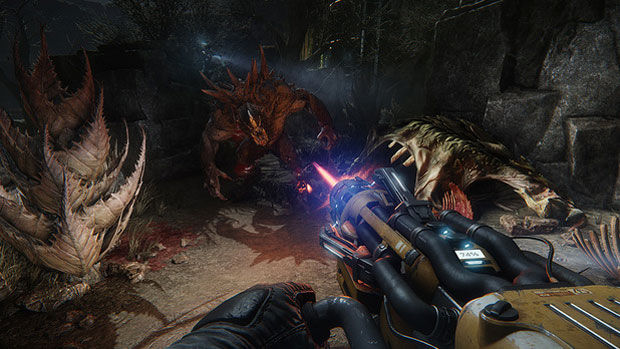 Evolve definitely had big expectations to live up for but thankfully developers Turtle Rock Studios have successfully delivered the next big multiplayer epic with flawless gameplay, great characters and a truly powerful monster that kicks severe butt! Sure it does have some parallels to Aliens or Predator but in my opinion, the gameplay is far superior and is easily one of the best multiplayer games that is more than just a first person shooter. 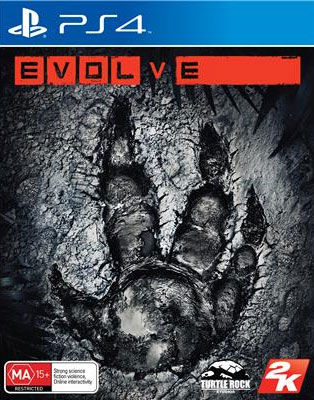